Time for change: why 50 Best is committed to a more inclusive restaurant industry

Hélène Pietrini, Director of The World's 50 Best Restaurants, addresses issues of diversity in the restaurant industry in an open letter.

I am the director of The World’s 50 Best Restaurants – and I am a woman.

In fact, the majority of the team behind the lists and awards is female. In addition, of the 26 Academy Chairs who oversee the global voting panel for The World’s 50 Best Restaurants, half are women.

The 50 Best organisation – often seen as an influential list-maker under the scrutiny of challenging criticism – joins in calling for an industry where equality is a reality. Beyond gender, 50 Best aspires to highlight and celebrate a culturally and ethnically diverse mix of restaurants and chefs, not only through its activities and lists in Asia and Latin America, but on a global scale too.

Our role in drawing media attention to the best dining destinations and in influencing the itineraries of travelling gourmets brings with it significant responsibility. The integrity of our voting system remains a core priority and we are taking further steps towards inclusivity and diversity. Our statement today includes details of an immediate internal choice regarding gender parity in our voting panel and progressive plans for the future.

On The World’s 50 Best Restaurants list this year, just four restaurants are overtly led by women: Hiša Franko in Slovenia, Arzak in Spain, Cosme in the US and Nahm in Thailand. While many, including Central, Quintonil, Restaurant Tim Raue, Osteria Francescana, Reale and Astrid y Gastón, have strong female leaders co-running the business, the chef who is the face of each of these establishments is male.

So what is 50 Best doing to address such issues? After all, as Dominique Crenn asked in a piece written for the 50 Best website earlier this year: “How can we look at list after list of the supposed best in our field and see a group of people who almost uniformly share the same gender and race and just shrug our shoulders?”

Were we actively to manipulate the make-up of the list (which is the result of the votes of over 1,000 experts worldwide), then we would instantly alter its central principle: that the voters select what they judge to have been their best dining experiences. As a result, the authenticity and credibility of the list and the 50 Best brand would undoubtedly be diminished. We cannot – and should not – control how people vote. Furthermore, we reflect the gastronomic world as it is, rather than as it should be.

However, we can help foster an environment where expert female voices are heard and where female chefs are identified, valued and invested in on an equal basis to their male counterparts. 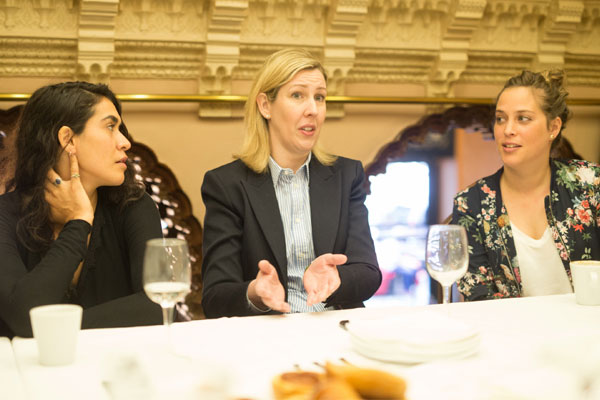 We begin with a commitment to gender balance where it remains within our control – the priority being in our voting panel. From now, 50 Best is committed to achieving a 50-50 gender balance across its 1,040-strong worldwide Academy of voters. Prior to the next round of voting for The World’s 50 Best Restaurants, Academy members will also be encouraged to look beyond the current list, to explore a diverse mix of restaurants during their travels and to take issues of representation into consideration in their voting choices. With a minimum of 25% of the panel renewed every year, we have the opportunity to recruit more female experts into the voting Academy.

The 50-50 gender principle will continue to apply to our Academy Chair appointments and is evidenced in our speaker line-up at #50BestTalks in San Francisco on September 12. Across our digital output, parity, inclusivity and diversity are among our guiding principles.

In parallel, the elit Vodka World’s Best Female Chef Award series will continue to shine a light on supremely talented female chefs who inspire younger women to reach the heights of their chosen profession. The award’s most recent recipient, Clare Smyth, puts it like this: “We still have a real lack of women recognised at the top of the industry and we have to do something about that – we’re not going to change it by ignoring it. Sometimes you have to go over the top by recognising women and giving them a platform so that we can really start to re-correct the balance.”

The World’s Best Female Chef is not an award that seeks to separate female cooking or define it as ‘other’, but provides an opportunity for successful women to be celebrated, as well as for them to address important issues including representation. 50 Best’s role is to amplify their achievements and their messages to an international audience.

Over almost a decade since the award’s inception, the Best Female Chef series has rewarded 18 women across 15 countries. In the process, it has generated a vast amount of positive media coverage for the individuals concerned and prompted ongoing debate around gender issues in the food world.

Role models are needed more than ever. We understand why this award has its critics, and I am personally keen to keep the dialogue open about the issue. Once we reach a point of genuine gender parity in the restaurant sector, this series can surely be retired. But we are, unfortunately, not at that point as an industry or as a society.

Our actions will be supported by a fresh initiative: 50 Best recently brought together many of the world’s leading female chefs to create an informal advisory board. Its purpose is to act as a forum for discussion on gender-related issues that will inform 50 Best’s policies and content, as well as provide a network that supports women in the restaurant industry. The first meeting of this body took place in Bilbao in June, and was attended by chefs including Elena Arzak, Clare Smyth, Daniela Soto-Innes, Kamilla Seidler, Ana Ros, Pia Leon and Margarita Forés, among others, with more meetings planned. Communication between the various participants takes place on a regular basis, and the group is united in its push for change.

On September 12, the latest edition of our global thought-leadership event series, #50BestTalks, takes place in San Francisco, presented by Miele. With a diverse mix of participants, the event will see speakers including Lara Gilmore, Gaggan Anand, Daniela Soto-Innes and Dominique Crenn addressing issues under the theme ‘Championing a Diverse Future’. As a cradle of diversity, innovation and cultural change, San Francisco provides an appropriate setting from which to broadcast these ‘voices for change’.

While there is inevitably a wide variety of views on exactly how we push for greater gender balance and wider diversity in the restaurant world, we are all essentially shooting for the same goal. We do not have all the answers, but working together we can make a significant difference. I therefore call for a collaborative and supportive approach to these complex issues.

Let’s join forces regardless of race, age, gender, orientation, success level, status and location with a positive message in pursuit of a more progressive and inclusive future.