As part of Middle East & North Africa’s 50 Best Restaurants, sponsored by S.Pellegrino & Acqua Panna, Dubai’s Trèsind Studio was named the winner of the Art of Hospitality Award, while also landing at No.4 position in the inaugural list. 50 Best meets head chef Himanshu Saini and restaurant manager Vipin Panwar to learn how the team honed its approach to turn an empty reservations diary into a fully booked dining room

It's the spring of 2016 and Himanshu Saini – now head chef at Dubai’s Trèsind Studio – is following the results of Asia’s 50 Best Restaurants live from the restaurant he is working at in New Delhi, India. As the roll call of restaurants is revealed, Saini and his peers Googled each venue, checked out their menus and examined their culinary identities.

At that moment, Saini and his colleagues made a pact. Collectively, they screenshotted the Asia’s 50 Best Restaurants 2016 logo, made it the screensaver on their phones and promised to keep it there until they became part of the list.

“It seems a long time ago now, but I vividly remember seeing all of the emotion from the chefs who were named in the 2016 list – I was blown away by seeing people crying with how much the recognition means to them,” begins Chef Saini, speaking from the sun-bathed terrace of Trèsind Studio’s new Dubai location, which is set to open in March. “Your phone screen is probably the thing you see the most in the world, so by setting the 50 Best logo as our screensaver, it would be the strongest way for us to manifest our dreams and be a part of it.”

Saini continued cooking and studying, but disappointment followed year after year as his restaurant failed to be featured, so he replaced the screensaver. “I think that it must have been there for three or four years,” he says. “But I never stopped thinking about it – I decided to focus; to stop dreaming and start working.”

On 7th February 2022, Saini finally made good on his promise, as Trèsind Studio was named No.4 in the inaugural list of MENA’s 50 Best Restaurants, picking up the coveted Art of Hospitality Award in the process. 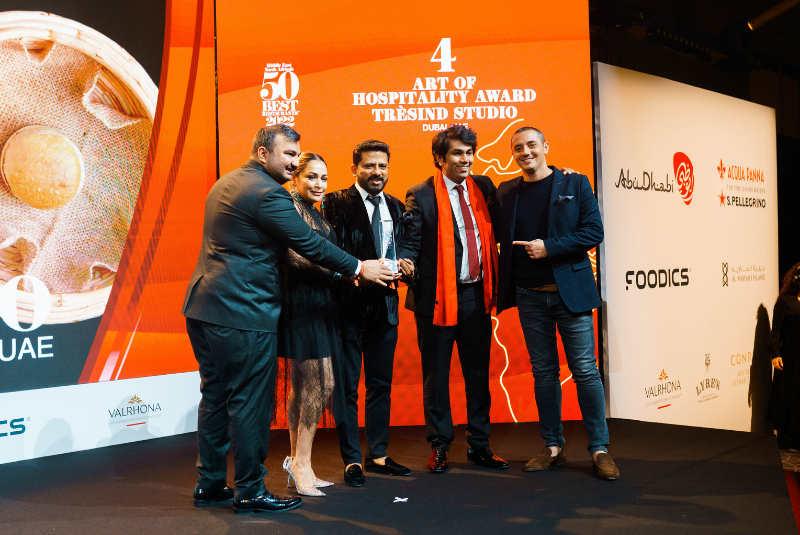 “Being No.4 on the list is out of my imagination; beyond my dreams,” Saini exudes. “When I look back at the restaurant in previous years and on myself as a chef, I now realise that we were not ready. It would have been a disaster for us if we were part of 50 Best at that point in time – getting in the list this year makes me believe in the process… It has given us so much confidence and I feel five years younger, I’ve got more energy and I’m ready to take the next steps.”

This renewed vigour comes at a good time for Saini and his team. They are channelling their energy into the new, larger Trèsind Studio site, at the Center of the Palm on the rooftop of Nakheel Mall. Previously, Trèsind Studio was annexed to its sister restaurant Trèsind – which itself made the MENA’s 50 Best list in No.18 position – and operated as a chef’s table. The team wanted to prove its elevated, test kitchen-style concept would work in the Dubai dining scene before investing wholesale in its ideology. Its recent ranking has justified their approach. 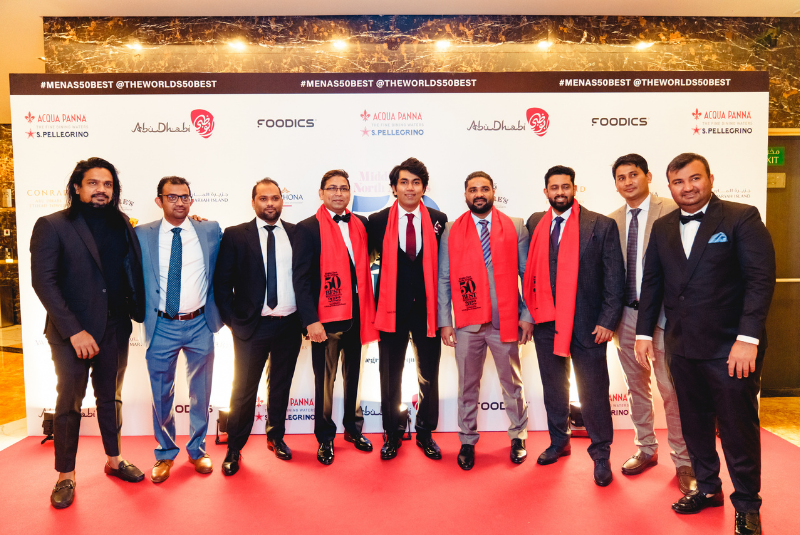 Second album in the studio
While the new-look Trèsind Studio is larger in terms of square footage and, indeed, the scale of ideas behind it, it only has an extra two covers, bringing the number of diners per sitting from 18 to 20. “We thought that the Dubai crowd did not have the patience to sit for two hours over a tasting menu. By starting from within at Trèsind, it made it easier to promote and build knowledge and awareness about this kind of concept. But if everything aligned, we knew we could go big.”

Although it wasn’t all smooth sailing. “At the beginning, we struggled,” admits Saini. “There were nights when we would have zero covers booked in, but the restaurant next door was packed with 100 people. We were asking ourselves where we were going wrong an whether we were doing the right thing.”

The early Studio menus were punctuated with tropes of traditional luxury. Caviar was served atop tandoori lamb chops; butter chicken was generously heaped in shaved black truffle. “We thought it was what Dubai would be expecting – traditional fine ingredients and high-quality Japanese meat,” explains Saini.

It was advice from top chefs who came to the restaurant that helped Saini find Trèsind Studio’s true identity. “When we started doing collaborations with other cooks about 18 months ago, everything clicked into place,” starts Saini. “They all told me: ‘70%of your menu is fantastic, but 30% is stuff you don’t need to do.’ They explained that my style of food didn’t need truffle or caviar to make it interesting. Changing this philosophy gave us a point of difference to many restaurants in Dubai who all use these same ingredients associated with luxury.”

This confidence to pare his dishes back to their authentic bones unlocked a new side to the chef’s cookery. “The advice Riccardo Camanini [chef and co-owner of Lido 84, Italy, the restaurant ranked No.15 in The World’s 50 Best Restaurants 2021] gave when he came here was pure gold dust,” he says. “He’s without doubt one of the best chefs I’ve worked with and after spending a few days with him I was in awe. He told me that he had eaten in many Indian restaurants over the years, but he felt the authentic Indian vibe with me more than anyone else – he taught me to back my skills. Today, our menu is just 30% meat and fish and 70% vegetarian. It’s now this which represents our uniqueness and not caviar and truffle.” 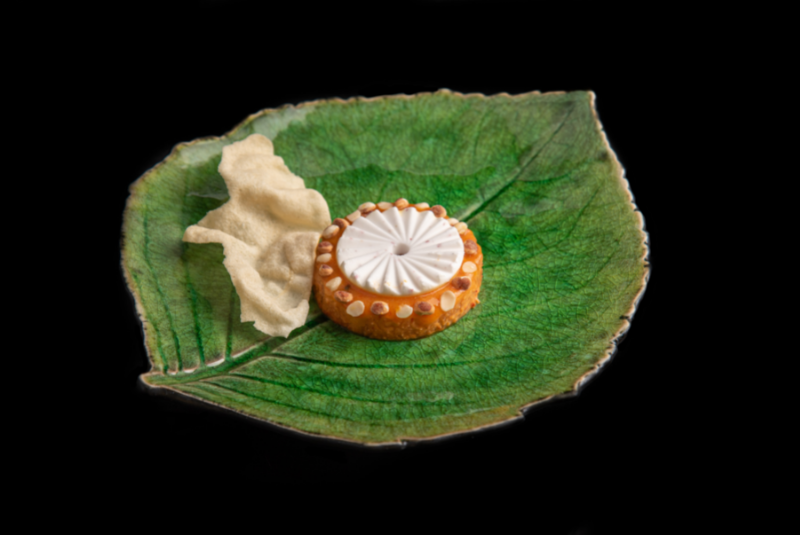 The guest as god
Any visitor to Trèsind Studio eulogises about its service. Attentive without being intrusive, humorous without verging into misguided comedy, the production is choreographed by the restaurant manager, Vipin Panwar. “In India, we feel like the guest is god,” he says. “We treat our restaurant as home and everything we do is about giving that homely feeling to the people coming in to eat with us.”

This is partly manifested through sheer generosity. “If a guest tells us that they enjoyed the lamb chops, then we will give them another portion,” says Panwar. “For us it is the biggest compliment when someone says that they enjoyed our food, so we will let them experience it again, and again if they so desire.”

However, to attract enough votes from the MENA's 50 Best Academy to be named the restaurant which offers the best service in the region, it takes more than just extra helpings. A night at Trèsind Studio takes several unexpected plot twists, including the whole restaurant being plunged into darkness for a dish towards the end of the meal. For this to work, the front-of-house operation needs to be in perfect synergy with the kitchen, allowing each table to receive the course and experience at the correct point of the dinner. 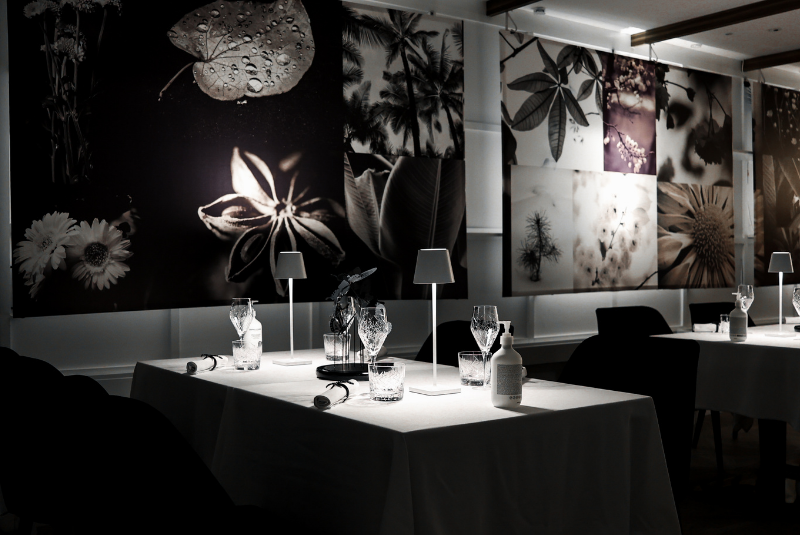 “Chef and I sit down together to plan the menu and I try to come up with fun ways to entertain the diners and give them things that they might not have experienced before,” says Panwar. “I like to play with the guest, but never in a way that they might be offended. I keep it as relaxed as possible – it’s pretty simple, really.”

“Vipin is selling himself short,” interjects Saini. “He’s far too modest. He is one of the most talented people in the industry and to deliver the style of service he describes takes a huge amount of skill. He is the pure epitome of the passion project we consider Trèsind Studio to be and he’s one of the most subtly observant people I have met. Before the guest has even sat down, he will recognise whether they are right or left handed, so he can arrange the glassware and cutlery appropriately. It’s the small details that really matter when we are trying to run a restaurant at this level.”

As Saini and Panwar prepare to open the new-look Trèsind Studio, which now stands on its own with a clear identity, a kitchen garden, and a dedicated bar (which they hope will become a destination in its own right), it’s clear they expect big things. “We know we have all of the tools here to make us one of the best restaurants around,” says Saini. “The No.4 position and the Art of Hospitality Award were obviously great, but I really believe that this is just the beginning.”