Alain Passard on winning the Chefs’ Choice Award 2019, sponsored by Estrella Damm, and how he listens to the songbook of the seasons

The chef behind Paris restaurant Arpège picked up the only peer-voted gong at The World’s 50 Best Restaurants 2019. He joined 50 Best’s Brand Director, Hélène Pietrini, the morning after the big event to reflect on the meaning of such an accolade for him, his country and his ethos towards food

It’s no coincidence that Alain Passard arrives at his first interview after receiving the Chefs’ Choice Award 2019, sponsored by Estrella Damm, wearing blue, white and red. Azure seersucker pants are teamed with a white shirt so crisp it could cover the tables at his restaurant in Paris’s 7th arrondissement, which has maintained Michelin three-star status for 20 years. A Frenchman as proud as they come, Passard’s tricolour spirit exudes every mannerism, gesture and element of Arpège, which was announced as No.8 at The World’s 50 Best Restaurants 2019 awards ceremony in Singapore.

Although he was one of the last off the dancefloor at the official after party in the Vegas-beating Marquee nightclub at Marina Bay Sands, the spring in his step the morning after belies the celebration the night before. How does he feel about winning the only award voted on by his fellow chefs? “I would say it's almost the most beautiful thing. Thank you to all my brothers and sisters for this award,” Passard smiles with an emblematic Gallic shrug. “Recognition by the profession is beautiful because we are a family. We're all very close because we're going through the same adventure; it is the most beautiful profession and it gives us the chance to work with the very good friend we call nature.”

Passard was one of the first exponents of vegetable-forward cookery. While French chefs and those further afield were extolling the virtues of prime cuts and manually massaged meat, in 2001, he made the decision to make his restaurant vegetable-only, instigating a zeitgeist that has only really taken root in the past few years. While meat has recently made a return to his menus, produce from his smallholdings across France remain front and centre. “We now have three farms.  The first is 20 years old, La Sarthe, a very sandy soil, where we grow asparagus, leeks and carrots,” he says. “We have more than three hectares of cultivated land and six gardeners. Everything is 100% natural. Everything is in season. Everything is harvested in the morning.

“Our second is in the Eure, a very clayey soil. We grow turnip, cabbage and beetroot. We also have an orchard on the bay of Mont-Saint-Michel between Granville and Avranches where we have apple, pear, apricot, peach, fig and medlar trees. We are now totally autonomous. We generate 60 tons of vegetables per year – it’s a pure look at what nature has written. The gardeners are the base of our kitchen; there is nothing without them. If they are not in the garden at 5am, I do not cook.” 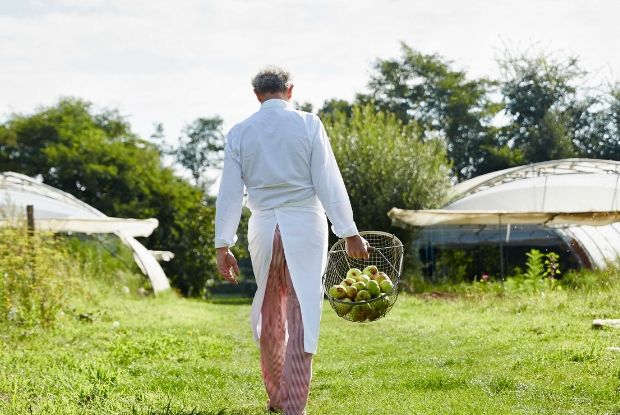 Passard collects produce from one of his three farms


Passard’s menu reads like a songbook to the seasons. There’s a poem by British Romantic poet Andrew Marvel entitled To His Coy Mistress. In the verse, Marvel writes ‘My vegetable love should grow; vaster than empires and more slow’. It could almost mark an epitaph for Passard’s philosophy – a love that is slower to develop requires more care and attention, but once it has reached fruition, it is forever unassailable. “When I say nature has written a magnificent poem, it means that there is fragility in it. The product must be nurtured from birth. If we put the tomato seed in the soil in mid-February, we will then let it grow and watch it closely until it is ready. We are lucky to have four distinct seasons in France and we should stop using produce that is out of season; that is not what nature has written.

“Let’s stop crossing seasons in the pan,” he says with heavy emphasis. “In a garden, everything has a role to play; a tomato, a cucumber – it is water. It is made to quench your thirst in summer when it is 30C, but not in January when it is zero degrees. In winter, we warm up and notice that nature has put a celeriac in the ground to make soup and a gratin – it's all noted down. Today, I think we all have this mission to put the seasons in their place. Nature has written the most beautiful cookbook; it’s all we need to open today.”

Passard’s passion for seasonality is infectious and it is clear that he sees his role as a chef to encourage his peers to do the same. “When the first tomato of the season comes through my door very soon, it will be an event. Everything has to go back to being an event and there has to be enthusiasm about it; it is important.”

The World’s 50 Best Restaurants 2019 marked a vintage year for France. The ceremony saw the No.1 spot go to Mirazur on the Côte d’Azur, the first time the award for The World’s Best Restaurant, sponsored by S.Pellegrino and Acqua Panna, has landed on French soil. Its chef Mauro Colagreco is also an acolyte of Passard’s philosophy, serving produce only from his three-tiered garden overlooking the French Riviera. “Mauro came to my house for a conversation,” explains Passard. “I don’t know what he came looking for – you’d have to ask him – but I gave him the same thing I give everyone who comes to my door. I told him it is a school of the senses; a beauty of the gesture and the seasons. That you have to look to the bottom of the pan to see what is happening.

“It is to taste your cooking, to use your senses to correct a sauce, then to listen to the song of the fire, the roaster.” That is Alain Passard’s school and it is a syllabus any aspiring chef would do well to enrol in.