Plenty more fish in the sea: how Aponiente is brewing a culinary revolution from the depths of the ocean

Would you eat a tarte tatin with puff pastry made from fish scales, apples replaced with seaweed, and with its sweetness coming from the extraction of glucose from an aquatic plant? Chef Ángel León thinks you should – and that you’d be surprised how good it tastes. At his restaurant Aponiente in the south of Spain, León is breaking paradigms about what it means to eat from the sea. Discover the fascinating philosophy behind the winner of the Flor de Caña Sustainable Restaurant Award 2022

There is very little that Chef Ángel León will not eat. Leaning over the side of the boat in the Bay of Cádiz, he picks up some marine flora floating on the surface of the water and puts it in his mouth. Some of his recent hospital visits have been due to ingesting a venomous type of algae, then some shellfish which contained sand with a toxic element. But these experienced haven’t put him off.

“We have stopped looking at nature with hunger,” remarks the 45-year-old Spanish chef, who has dedicated his life to turning the products discarded by commercial fishing boats into gastronomic pieces of art. “We spend millions of euros to go to the moon to look for new ingredients, or we say that the future of humanity is crickets and insects. Meanwhile, 30,000 tonnes of fish are thrown away every day in Europe alone. Are you kidding me?” 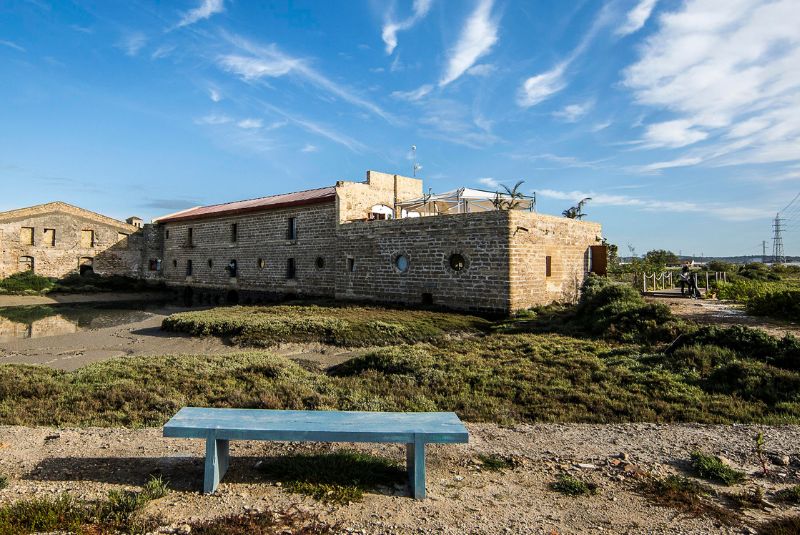 In 2006, after studying gastronomy in Spain and France, Léon found himself in between kitchens. Born and raised in Andalusia, the southernmost region of Spain, he had always loved the sea, so he got a job on a fishing trawler. For weeks, he watched as 30 to 40 per cent of the fish caught every day was thrown away because it wasn’t the few species that people were willing to buy – such as tuna, hake and salmon.

“At that time, it seemed to me that as a chef, the best thing I could do was cook what human beings didn’t want,” he recalls. “It was the fairest thing and almost an obligation to me. It no longer made sense to cook shrimp or tuna.”

Known in Spanish as moralla, the bycatch of the trawlers usually features between 20 and 30 different types of lesser-known fish, whose make-up changes every day. It is often sold for as little as 20 cents per kilo to make flour for the food industry, an essential ingredient in chicken feed – or if can’t be sold, it’s simply thrown away. When León opened Aponiente in El Puerto de Santa María, a town near Cadiz, in 2006, his idea was to find new uses for moralla. 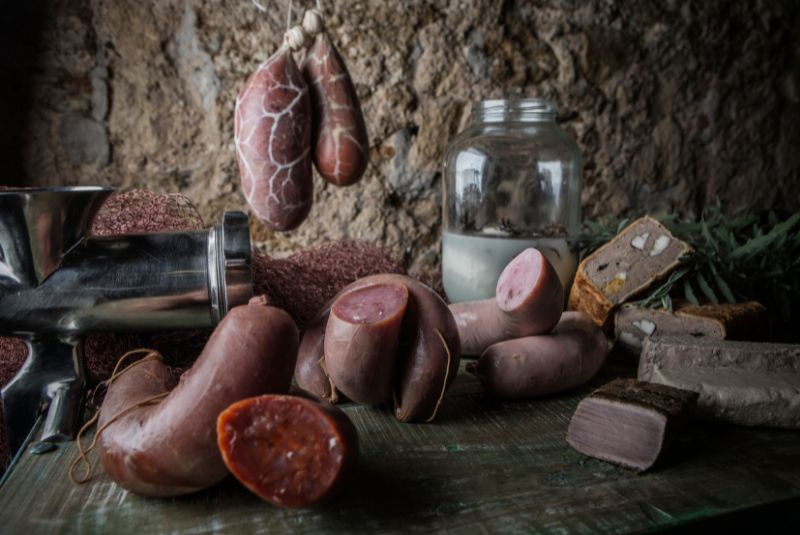 But for the first few years, the chef found himself swimming against the tide. His concept for a fine dining restaurant that fed people the kind of fish no one else would eat struggled to take off. León's team was investing hours every day explaining to diners all these species of fish they’d never heard of before – and he realised that the idea was too alien to resonate widely.

“Everything changed when I decided to turn the fish proteins that human beings didn’t want into things that they knew: sausages, chorizos, hamburgers, black pudding, ham, salami… Suddenly I realised that people didn’t care where the fish came from, whether it was discarded or not. They just eat what gives them security,” reflects León.

The chef became an expert at making marine charcuterie. From the belly of Almadraba red tuna, he carves a ham. He turns the skin of moray eels into crunchy bites that you could easily mistake for pork crackling. Then, he started to go beyond. From tuna roe that is normally thrown away, he makes marine cheese. From fermented seaweed, he makes a sweet tart filling with the texture of cooked apples. The sheer variety of marine products he has discovered over the last 16 years have planted the seed of a new dream.

“Eventually, I would like Aponiente to discover so many new ingredients from the sea that it would serve a marine menu without fish,” he says. These days, 60 per cent of the tasting menu is already made up of non-fish products – so the dream is not that far away. 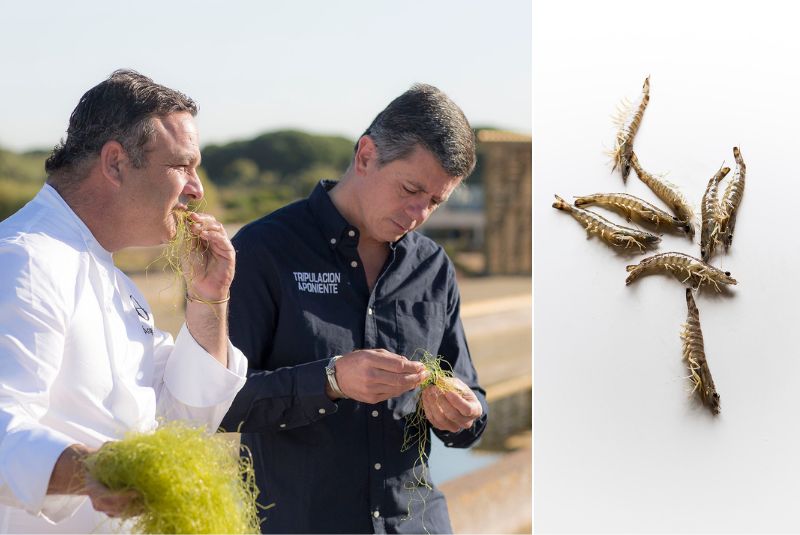 The flavour of the sea

With a menu exclusively focused on sea-sourced ingredients, diners expect the Aponiente gastronomic experience to be focused on marine flavours. This isn’t the case, explains León. In 2009, he discovered an edible form of phytoplankton that he has since been growing and developing: now, diners get to experience several different planktons on the menu, each with different tastes, colours and textures.

“So at Aponiente, even though you eat the sea, you won’t miss anything – you’ll feel like you’re eating meat, vegetables and lots of different textures,” he adds.

Over the course of his life exploring and tasting the sea, León has made a few brilliant discoveries. One of the most recent, from 2018, is the ‘marine grain’ or ‘sea rice’, the product of an aquatic seagrass called zostera marina.

During a diving expedition, the chef noticed an underwater plant with a spike at the top, similar to that of a wheat plant. When analysed in the lab, it became clear that the seagrass had a grain. “I cooked it and freaked out,” says the chef. “It had a super interesting texture, between rice and quinoa. We went back to the diving site and found that there were whole meadows of it under the sea.” 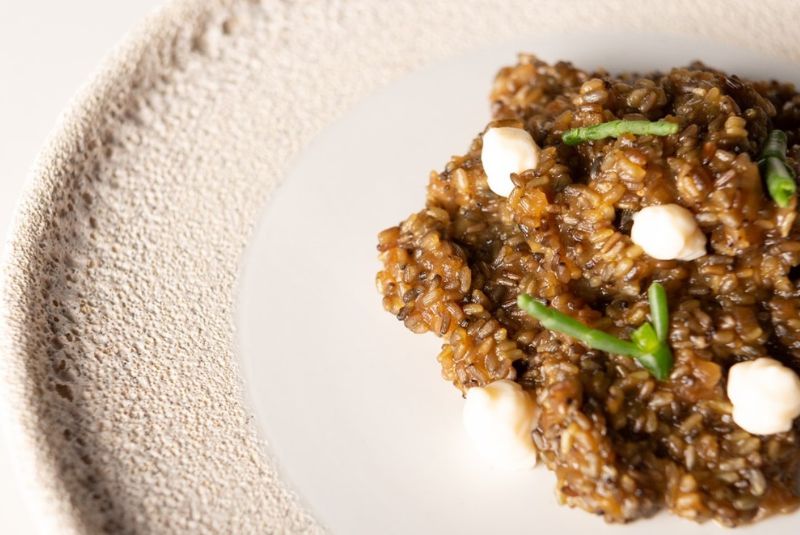 Sea rice, a marine cereal with a texture similar to quinoa, opened up endless possibilites for Chef León

To control the quality and growth of the zostera marina, León and his team moved the plants to an estuary on land, where they currently grow two hectares. But beyond serving sea rice at Aponiente, the chef sees much bigger potential in this project. “This marine grain has twice as many amino acids as rice. It contains vitamin B and vitamin C and it’s gluten free. For me, it’s one of the possible solutions for the future of human beings.

“To be able to grow cereals in the sea would be a paradigm shift. And I understand that the world is not yet ready for this and that it might take a long time to see it through. But I think that in 10 or 12 years’ time, we’ll see the seas full of grains. And I will say to my son: ‘Do you remember how crazy your father was? Well, look, son – all the people are eating it now’,” he laughs.

Seeing his work recognised with the Flor de Caña Sustainable Restaurant Award at The World’s 50 Best Restaurants 2022 has made León reflect on the rollercoaster 16 years since he opened the restaurant. “If I could, I would go back in time and give the award to the crazy cook who opened a restaurant that only served those proteins that were thrown overboard from boats,” he says. “I’d also give it to the whole team who was with me then, for going against the current for four whole years before the world took notice.” 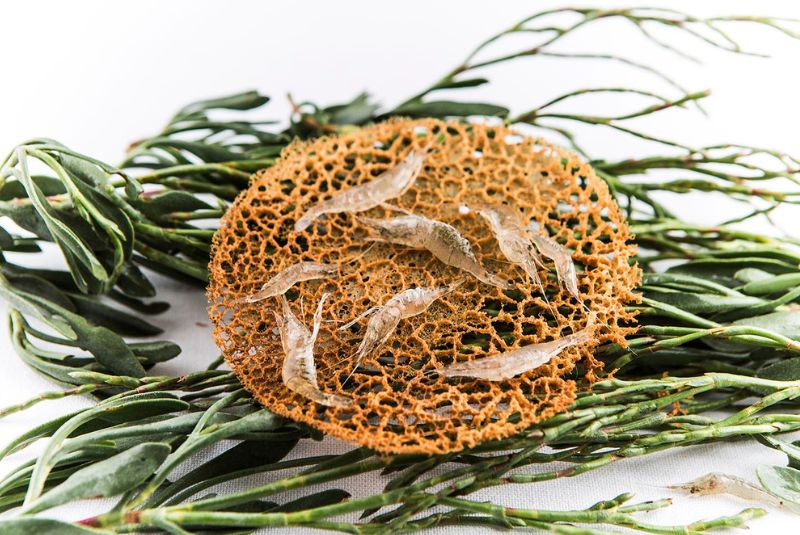 The restaurant also puts a modern spin on Spanish classics, such as this shrimp "tortilla"

“The award makes me very happy and I do think that things are changing,” he continues. “More and more chefs are becoming aware of cooking their own local area and the new generations are different, too. The problem is that we keep talking about sustainability, but we have stopped talking about nature. The principle of sustainability is to love nature. And that’s very difficult to explain to a child if they don’t have a chance to live in nature, to experience it and love it.

“We should start from scratch and accept what we have, accept the ugliness of the fish from your local area, accept the five or six vegetables that grow around you, accept the reality of where you live, without ordering online products from the other side of the world. If you have the opportunity to stop going to the supermarket and start going to the market, do that. Just that one word, ‘super’, has completely changed the way we eat. And a good way of being in touch with nature is cooking it. Bring the family together, get people to cook and tell them stories about what they’re eating.

“And finally, we have to accept the sea. The sea is three fourths of the earth. There is a reason for that. We’re too selective in what we eat. In the end, if we accept the sea as it is, it has enough food to feed the world.”

León goes back to his dining room, where he will continue to inspire diners and the world to live more sustainably by eating more sustainably. Just like the wind that the restaurant is named after – a fresh wind from the west, good for fishing – Aponiente is like a breath of fresh air in the crowded gastronomic world.