Behind the scenes at Abajo and Sucre: the new London bar and restaurant from Argentina’s hottest duo

The UK’s most exciting opening of recent times is a collaboration between big-hitting bartender Renato ‘Tato’ Giovannoni of Florería Atlántico, and Fernando Trocca, former executive chef of Sucre, which featured in the first two editions of Latin America’s 50 Best Restaurants. After opening the original Sucre together in Buenos Aires in 2001, the award-winning chef and bartender team have decamped to London to open Sucre restaurant and downstairs bar Abajo


A spirulina-spiked cocktail glimmers bright blue beside a cherry-red highball, punctuating the darkness of Tato Giovannoni’s new basement bar. The drinks Something Blue and Something Red are two of the stars of Abajo’s inaugural menu, aptly named Everything was black and white until… It's a celebration of the era that began in 1983 in Argentina, when an explosion of colour, culture and music followed a dark period of military rule. The name Abajo, pronounced ‘ab-A-ho’ and meaning ‘underground’ or ‘below’, reflects the underground movement of bars and clubs in Buenos Aires at the time.

“The dark space represents the era we were living in and the fact that we were finally ending that darkness and coming into these colourful streets,” explains Giovannoni, who heads Buenos Aires bar Florería Atlántico, No.7 in The World’s 50 Best Bars 2020. “The different colours represent the different types of people who were mixing in the streets, parks and cultural places.” 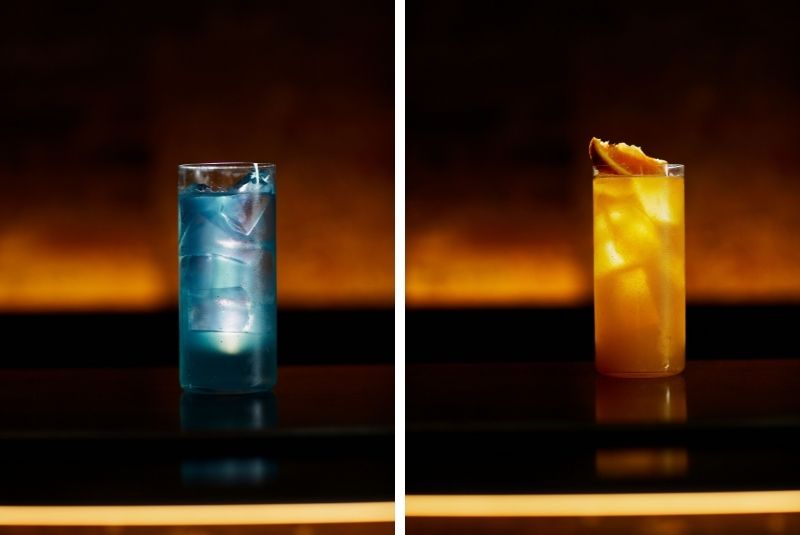 Something Blue and Something Orange, from the launch menu at London's Abajo

Sounds of the underground
While the idea for the bar’s theme came to Giovannoni in late 2019, its opening in July 2021 could not have been more perfectly timed – the celebration of freedom after a military dictatorship could be likened to the energy in London right now as the city emerges from multiple Covid-19 lockdowns. Abajo is already creating a buzz, with customers eager to enjoy the cocktails as well as its live music nights and a funky playlist of late 70s Argentine rock and 80s European bands – think The Cure, The Smiths and Depeche Mode.

Though Giovannoni was only 10 years old at the end of the dictatorship, he has vivid recollections of the vibrancy of the time, remembering the assumption of President Raúl Alfonsín and the spirit of jubilation that followed. “It was a big celebration everywhere; you could see people brightening up.”

He has translated that brightness into a menu of colourful highballs, each focusing on Latin American spirits and old-school, lesser-known products that Giovannoni believes are due a renaissance. The signature Everything Was Black and White Until… is a cross between an Irish coffee and an espresso martini that appears black and white until Abajo’s bartenders spritz it with graffiti colour, while the Something Blue is a refreshing mix of Giovannoni’s own brand of gin with mezcal, blue spirulina and tonic. Perhaps the most emblematic of Argentina is the Something Red, a play on the country’s iconic Amaro and Cola featuring amaro, Maraschino liqueur, cherries and pink grapefruit soda. 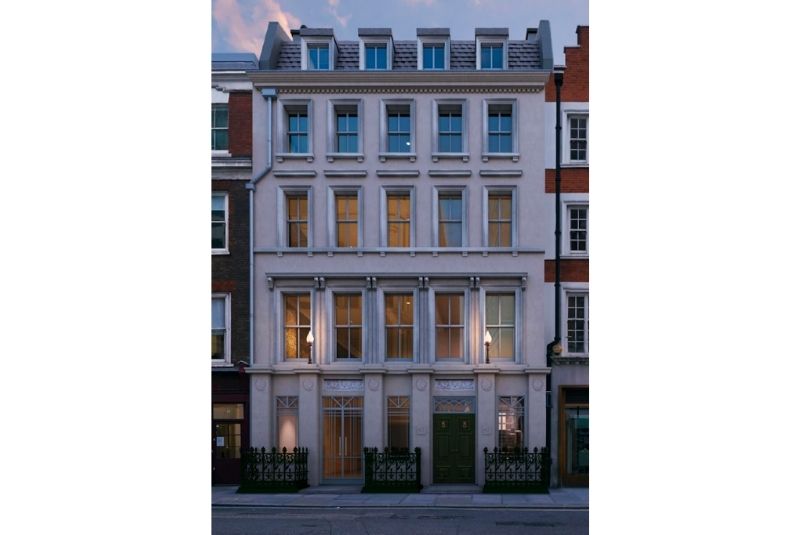 The exterior of Sucre and Abajo, set on the same street as the famous Liberty department store in Soho

Breaking down walls
With no back bar or wall between guests and bartenders, Abajo aims to foster a spirit of togetherness that was as craved by Argentines during seven years of military rule as it was by Londoners during 18 months of intermittent lockdown. Instead of a wall, a narrow bar slices through a standing area with high stools and an open space filled with comfy sofas, allowing a team of heavily inked bartenders to swivel and serve both table and bar guests.

“Bartenders always work with a wall between us and the customers and I didn’t want to have that wall,” says Giovannoni, who won the Altos Bartenders’ Bartender accolade at The World’s 50 Best Bars in 2020. “I want people to feel free and walk around.”

Melting-pot cuisine
Meanwhile, upstairs restaurant Sucre has a completely distinct personality. While it shares its Buenos Aires identity with Abajo, it is not the sort of Argentine restaurant that Londoners might expect. It is not a parrilla, despite the fact that executive chef Fernando Trocca advised the UK’s Gaucho steakhouse group for many years. Instead, Sucre is a blend of Italian, Spanish, Latin American and other European influences – in other words, the mix of immigration that led to today’s typical cuisine and culture in Argentina. 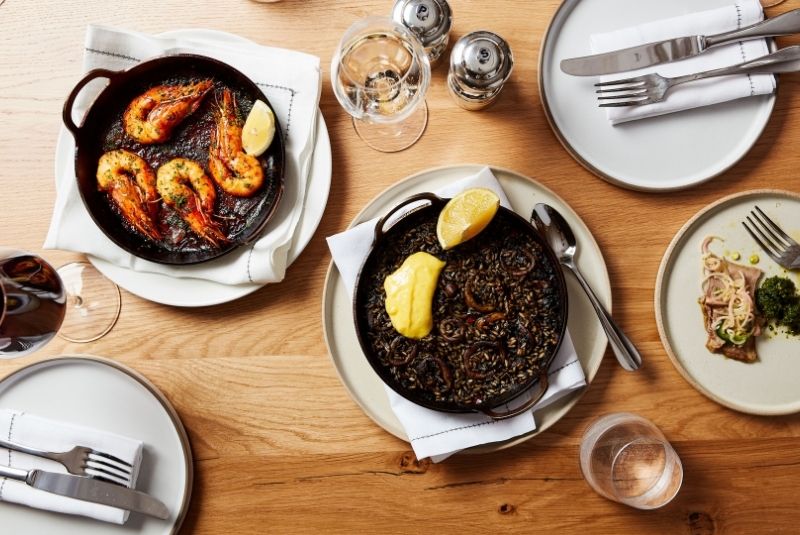 With a simple and affordable à la carte, Sucre serves appetisers such as cheese and onion empanadas – perfectly soft, plump pillows stuffed with oozing aged cheddar – and small plates such as crispy veal sweetbreads, an Argentine classic. The mains are split between the three sections of the kitchen – charcoal fire, wood oven and stove – with respective options including Ibérico pork matambre, a dish of stuffed flank steak prepared the traditional Argentine way; black fideuà, a Spanish one-pot dish of pasta with squid; and veal ossobuco with saffron risotto, an Italian dish of Trocca’s grandmother’s recipe. Fish also features heavily, with options like monkfish tail or brill with tarragon. All dishes are suitable for sharing, so it’s a great place to come as a group. 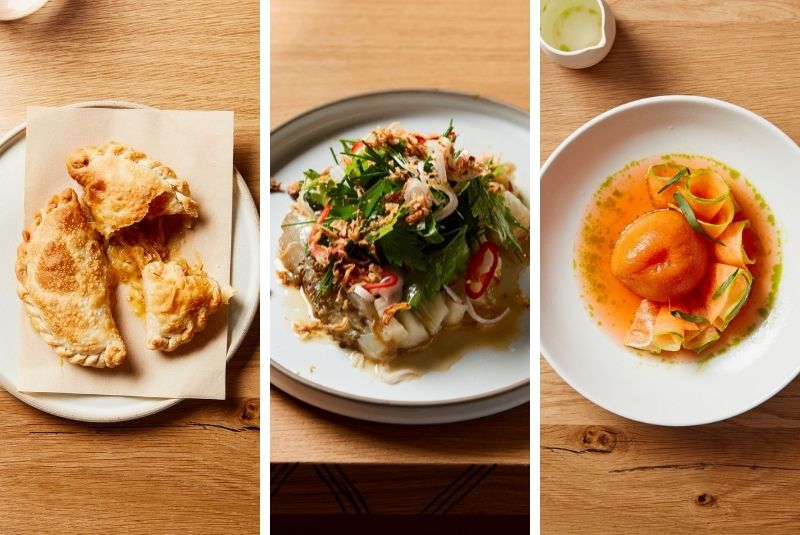 The only steak on the menu is an 800g bone-in ribeye with chimichurri for sharing, which head chef Steven Wilson sources along with Tamworth pork from Paddock Farm, a high-welfare Oxfordshire butchery. Then there’s a classic Argentine dessert, the super-sweet melt-in-the-middle dulce de leche fondant. The menu is similar to the original Sucre that Trocca opened in 2001, which has changed now that he is no longer involved in the food.

“We are not trying to be a steak restaurant,” says Trocca, who has made London his home for six months. “We have an open fire, Argentinian grill and wood-fired oven but it’s not just for meat, we also do fish and vegetables. It’s the food we eat in Argentina, a mix of Italian, Spanish and some Latin American influences.”

Faded grandeur
The restaurant’s décor reflects a similar mix of influences, with the former home of the London College of Music adapted to take on a Latin American vibe while retaining plenty of its original London identity. The ground floor of the iconic, 310-year-old building near Soho’s famous Carnaby Street now has an entrance bar area serving Sucre’s vermouths and aperitivos, then a grand dining room equipped with 12 chandeliers made up of more than 1,000 decanters with bulbs that sparkle through the cut glass. Japanese architect Noriyoshi Muramatsu of Studio Glitt carried out the design work remotely from Tokyo and has managed to retain the dining room’s faded grandeur and elegant wall mouldings, with a splash of Latin American colour in green banquettes and multi-coloured chairs. It’s a stylish spot that will attract a cool, young crowd, though Trocca hopes it will be accessible to all. 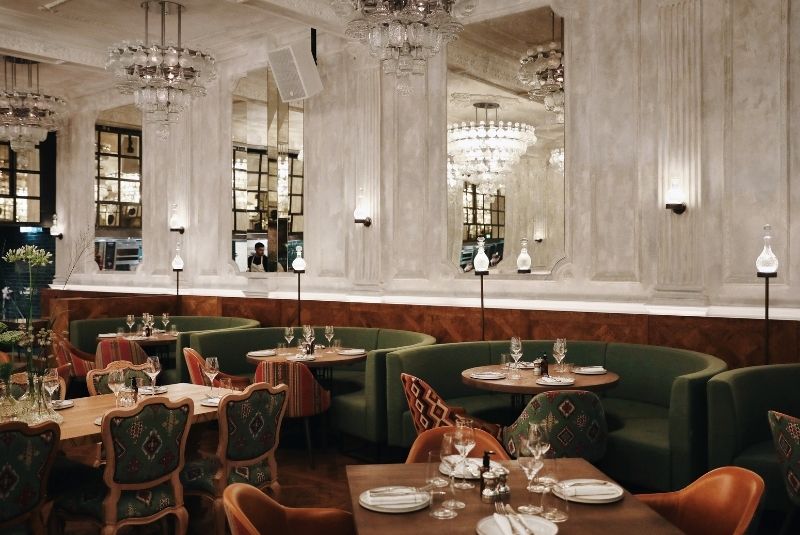 Sucre and Abajo are separate, standalone spaces, but there’s an easy flow between the two, with posters leading diners down the exposed-brick-walled staircase to the basement bar. Having worked together and been close friends for more than 20 years, Giovannoni and Trocca were reunited by Zeev Godik, the former Gaucho Group CEO who owns Sucre in Buenos Aires and is planning on taking the concept to Dubai. Together with Godik’s son, Greg, Trocca and Giovannoni have worked closely on both concepts for almost two years, choosing upholstery colours via Zoom and curating music playlists in isolation. Despite a tough year and a half, they are elated to finally have opened in London, and both bar and restaurant have been packed throughout their opening weeks.

“I got a little bit depressed with what was happening in Argentina, with Florería closed for 18 months,” says Giovannoni. “But I also understood the simplicity of what we do because we give people a lot of joy and happiness. Yesterday we saw the restaurant full, with people eating and smiling. We’ve been forbidden from seeing smiles and faces, so now being able to see that, it’s something simple but it means a lot.”