As winner of the American Express Icon Award 2019 for Latin America’s 50 Best Restaurants, Peruvian chef Pedro Miguel Schiaffino is on a mission to preserve centuries of Amazonian gastronomic knowledge – before it’s too late

In a tiny village in the middle of the Amazon jungle sits an abandoned bakery, its ovens rusty, expensive equipment gathering dust. This is a familiar scene throughout the Peruvian rainforest, the remnants of a government project to teach indigenous people to produce their own bread using wheat flour – even though not a single sheaf of wheat grows here. Chef Pedro Miguel Schiaffino says this sums up an entire region’s ignorance to the rainforest that holds the key to its nutrition.

“Latin America’s main cities were colonised by Europeans, so their way of seeing things, of feeding themselves, is very European,” he says. “In Peru, the state teaches mothers to feed their children yoghurt in a place with no cows, no goats. They teach them to make bread with wheat flour, when they have no wheat. It’s totally wrong. They need to learn how to make flour from yucca, or the corn that is native to the region and makes incredible bread.”

While Peruvian cuisine has enjoyed a global boom in the last decade, the ingredients and techniques of the jungle that makes up two thirds of the country’s landmass are as undervalued as ever. Schiaffino, recipient of the American Express Icon Award for Latin America’s 50 Best Restaurants, has made his life’s work championing the Amazon, through several projects and his Lima restaurants, Malabar and Ámaz.

“The key thing for Latin America is to start looking at our local and ancestral cultures, to learn from them – how they ate, how they cooked, how they built flavour with their ingredients, what techniques they used and how they preserved food. This is as relevant to fine dining as it is to every day nutrition.” 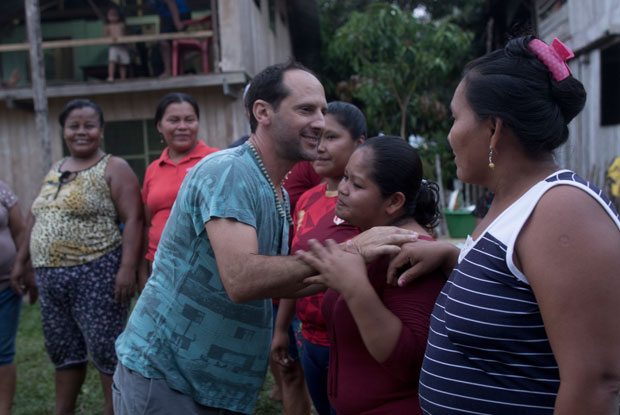 Schiaffino greets an indigenous community in the Amazon

In neighbouring Brazil, destruction of the rainforest is accelerating at the fastest rate on record. In Peru, which has the second-biggest share of the Amazon, deforestation is also on the up. But while the irreversible effects of this destruction on climate change are clear, Schiaffino says there’s something he sees as even more critical: the loss of gastronomic knowhow of entire communities.

“The knowledge these people have is incredibly important for our future, because they are the ones who know about the land, the species that live there, the forest, the nutrition that we used to have,” he says. “We are losing those traditions and that knowledge, and once it’s gone, there is no way to get it back because much of it is transmitted aurally.”

Schiaffino, like his Brazilian counterpart Alex Atala, and Leonor Espinosa in Colombia, is doing his bit to bring recognition to his country’s share of the Amazon. Aside from his restaurant Ámaz, which brings the region’s ingredients and recipes to Lima, he runs several projects including the sustainable fishing of paiche, and working with indigenous women from the Bora and Huitoto communities to turn poisonous yucca into ají negro, or black sauce, which he then sells at fair prices through his Schiaffino Gastronómica business.

Believing that the best way to bring Amazonian ingredients and techniques to the rest of Peru is by connecting communities with chefs, 42-year-old Schiaffino has involved some of Lima’s top young cooks in his cause. Jorge Muñoz of Astrid y Gastón is working on the paiche fish project, while César Choy of reigning Latin America’s Best Restaurant Maido is working on re-education around the hunting of bush meat, and Francesca Ferreyros of IK and Matias Cillóniz of Mó Bistró are working with black sauce. Together with his team, Schiaffino is slowly persuading the indigenous communities he visits to take pride in their own cuisine instead of subsisting on tinned tuna, noodles, biscuits and canned drinks. 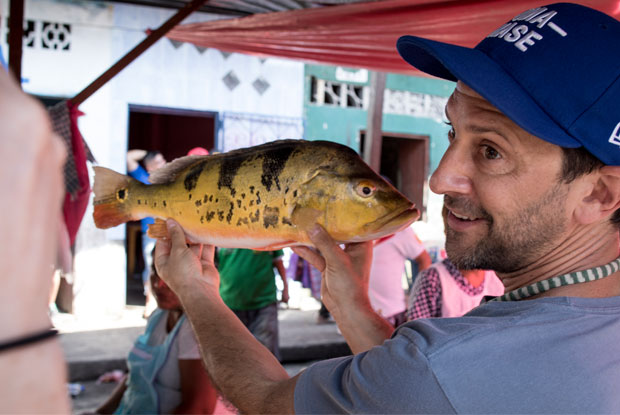 Like many of his peers across Latin America, Schiaffino grew up during times of conflict. He remembers clearly the day he walked out of school at 16 years old to learn that an acquaintance had been shot during a trip to Peru’s central region, which was rife with drug trafficking and terrorism. When things improved, he fell in love with the Amazon, visiting for the first time in 2003 and tasting the likes of macambo, a relative of cacao, and cocona, a citrus fruit.

“It was very difficult to travel to the interior of our country, so we had very little knowledge about it. The same happened in Colombia,” he says. “When you get that freedom to get to know your country, you take it. And I keep taking it. One of the things I love the most is to keep getting to know my country and its traditions and culture. There’s so much still to learn.”

Lauded for his work in the Amazon, Schiaffino says his own icons include fellow Peruvian Gastón Acurio, Mara Salles of Tordesilhas in São Paulo and Espinosa of Leo in Bogotá, but he also counts entire indigenous groups such as the Boras or Awajúns as icons. Now he says it’s time to use food to protect those communities and their cultures.

“Gastronomy has an incredibly important role because it is through food that we can show all this culture, knowledge and values. We can make people see the Amazon in a different way and finally get to know it,” he says. “We shouldn’t cook without knowledge, it’s irresponsible. The decisions you make when you buy a product or create a dish have an impact on your life, your city, your nutrition, your country. We need Latin American cooks to make more of an effort to get to know their cultures and traditions.”