For Colombian chef Leo Espinosa, winning the Latin America’s Best Female Chef Award in 2017 was as much a recognition for her team and her country as for her personally. But she says the award should be used as an example of how the “few women who fight against machismo” can make it as successful chefs.

“A large part of why there are so few female chefs is down to ourselves,” says Espinosa. “As women, we put other things first, such as having kids, getting married… but this is a hard job. [The award] is an example to show that we really can make it as women in the kitchen.”

According to Espinosa, machismo in the kitchen has never been a problem for her – in fact, she says she doesn’t believe it really exists. “I have asked my [male] colleagues ‘Why don’t you have any women in your kitchen' and they will reply: ‘I want to have them, but in the end they always leave.’”

It is widely reported that the disparity between men and women at the top of the restaurant industry is a result of the long hours and physical demands of the job, which see many women stepping back for family or lifestyle reasons. Others would cite a sometimes hostile kitchen culture as contributing to female disillusionment with the profession. Espinosa is one of few who have succeeded even after starting a family – her daughter, Laura, is the sommelier at Leo and also runs the Funleo foundation as well as the business side of the restaurant. 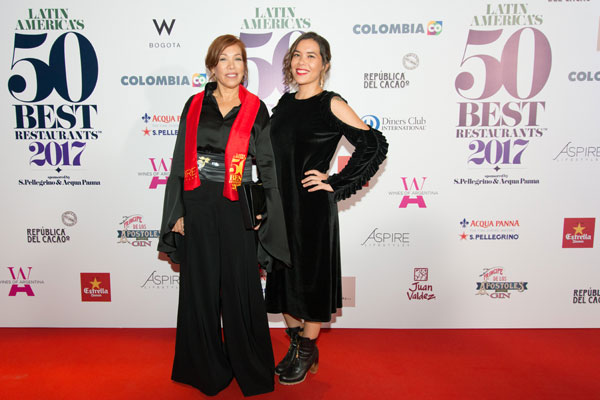 Espinosa’s view that women “only have ourselves to blame” is, of course, highly controversial. Dominique Crenn of Atelier Crenn in San Francisco, who won the World’s Best Female Chef title in 2016, says it’s important that all chefs, including men, speak up to make sure women are supported and able to succeed. “It’s important that if there are [female] chefs in their kitchen who have helped [male chefs], it’s nice to speak up and say ‘This is my chef, she’s been with me for 20 years.’ We need to support each other, we need to be clever and smart.” Ultimately, Crenn believes it’s time to move the conversation on from gender.

Ana Ros of Hisa Franko in Slovenia, who was voted World’s Best Female Chef 2017, said in her acceptance speech that “when I work 18 hours in the kitchen, I’m not with my children, and when I’m with my children, my team, my clients and my restaurant miss me a lot. There is always someone missing me. In the last few years, I realised that to be successful and to survive, I would still put my children first.” Ros rejects claims that male cooks don’t accept female chefs, adding that she is “deeply grateful” for their acceptance.

Across the 50 Best Restaurants lists, there are concerted and open efforts to bring more women into the kitchen. While only three of The World’s 50 Best Restaurants (Central, Arzak and Cosme) and seven of Latin America’s 50 Best Restaurants (Central, Maní, Leo, Parador La Huella, Gustu, Ambrosia and Rosetta) are run by women, many of the kitchens have females in senior positions. At Amber in Hong Kong, executive chef Richard Ekkebus operates a 50-50 kitchen gender split, which he says leads to a better balance of testosterone and helps things run smoothly. Daniela Soto-Innes of Cosme in New York City runs a 50-50 kitchen and advises female cooks to “ignore the gender thing”.

While many winners of the Best Female Chef title acknowledge that the award is controversial, most agree that it works as an effective platform to help promote and support women in the industry. “Those who stay [in the industry] are recognised,” says Espinosa. “But we still have a lot more to do.”


Find out more about Leo in Bogotá with our new video:

Get to know Espinosa in the latest instalment of our 50 Seconds With series:

The 50 Best BBVA Scholarship will award an aspiring chef with stages at Atelier Crenn in San Francisco and Mugaritz in San Sebastian. The scholarship is open to all cooks over the age of 18 with less than three years of professional experience. Find out more via the applications portal.