Anafe, a restaurant in Buenos Aires that melds Latin American and global influences in daring combinations, was recognised at Latin America’s 50 Best Restaurants 2021: Pasado y Futuro, sponsored by S.Pellegrino & Acqua Panna, with the American Express One To Watch Award, given yearly to a rising star venue in the region. Sorrel Moseley-Williams delves into the restaurant’s unique story and what makes it special

High-school friends with a passion for food, Mica Najmanovich and Nico Arcucci took separate paths to savour the world, but returned to Buenos Aires in 2017 to embark on a fresh project. Bringing together their colourful heritages and vibrant global experiences, Anafe started life as a humble pop-up wherever space allowed – but its tasty feasts quickly captured diners’ attention, including Canadian prime minister Justin Trudeau.

After four short years, Anafe (meaning ‘portable stove’ in Spanish) found a permanent home in the barrio of Colegiales, and the pair – today, partners in both business and life – is setting the standard in sophisticated comfort food, with the latest recognition of the American Express One To Watch Award marking a turning point. But, even before the chefs themselves became aware of it, Anafe’s culinary concept had already been in the making for years. 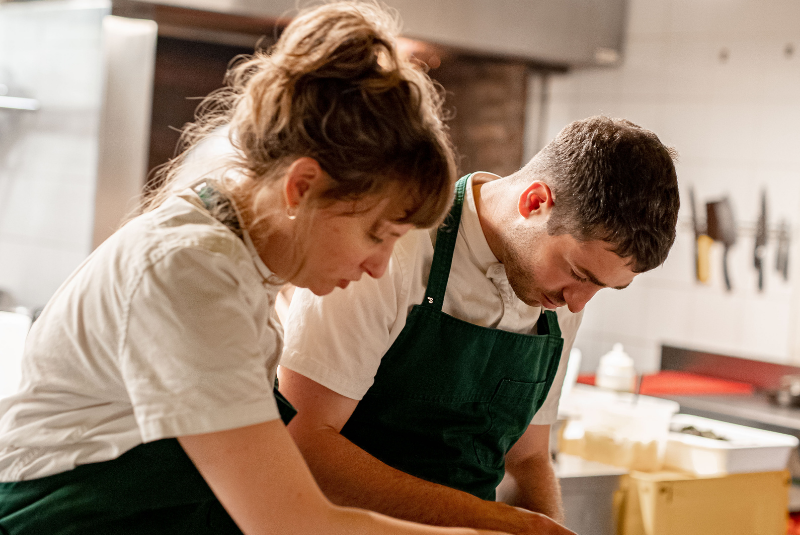 All roads lead to Buenos Aires
Moving to Spain to learn Mediterranean and Basque cuisine was a natural move for Arcucci, whose roots are a classic Argentine mix of Spanish and Italian, and he found himself cooking primarily with fire and embers. Najmanovich, on the other hand, decided to explore beyond her Jewish heritage, travelling even further afield to study patisserie in Melbourne.

“The culture of mezze, fresh products and small plates with a dozen dishes on the table was very much part of growing up, so studying patisserie in Australia meant learning about a very Anglo-Saxon gastro culture with huge Asian influences,” she reflects. “I gained a greater understanding of what flavours and condiments meant, which is why chimichurri coexists with rose water and sesame oil at Anafe.”

Both cooks returned from their international adventures around the same time and teamed up, quickly discovering how they complemented each other; a communal table followed suit. “It was just us, cooking out of my horrible kitchen, but we were both serious and committed to making this project function – and two heads are better than one,” says Arcucci. “Our palates are similar so we could correct flavours. Friends booked seats at our dinners, first held at Mica’s aunt’s house, then at my place. We did everything ourselves, but weren’t satisfied with a tasting menu as we wanted to create small plates – so the idea of doing pop-ups started to make sense.”

Hosting pop-ups also became a necessity to cope with growing demand, and Anafe first sprang up at Comité, then chez La Bohème. It was growing – and fast. A puerta cerrada or closed-door supper club experience was the next obvious choice. 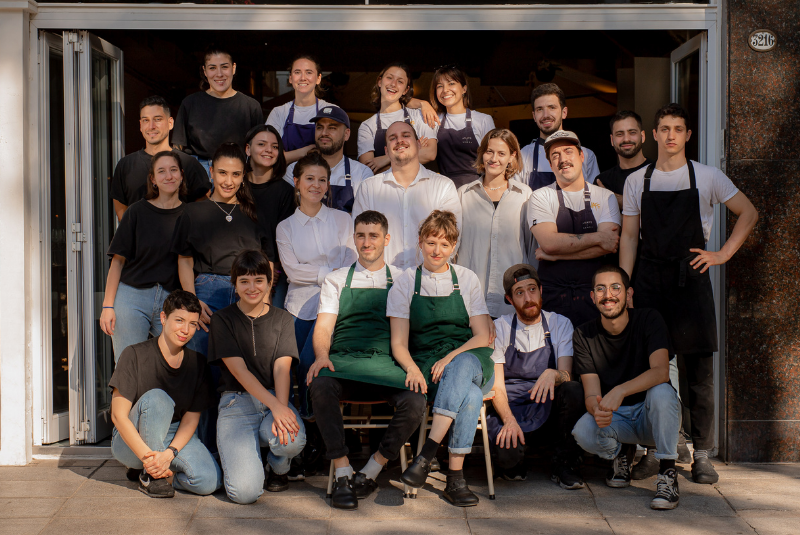 The Anafe team outside the restaurant in Buenos Aires, Argentina

A supper club with a difference
A popular trend in Buenos Aires, puerta cerrada concepts have allowed many chefs in the city to test out their fledgling restaurants, often with a set menu. While trailblazers like Casa Felix and Paladar have long closed their doors, 30 Sillas continues to fly the puerta cerrada flag, while Cantina Sunae turned into a permanent restaurant in 2014. (There’s even a 2021 revival of the concept, Glou Glou, led by Anafe’s head chef Luis Pabón.) Four years ago, the concept had started phasing out, but Najmanovich and Arcucci understood it would take Anafe to the next level.

“In 2017, pop-ups barely existed like they do today and we had to claw at the walls to be lent a kitchen,” recalls Najmanovich. “We worked at Nico’s 1970s house, where the fridge would break down once a day, and arrived at 7am to clean everything then work in the kitchen. That helped drive us forward. We could have thrown in the towel, but we carried on, understanding that if we could cook under these conditions, we could do so much more in our own kitchen.”

At the heart of the next phase was the desire to create a place where they themselves would want to eat. “Buenos Aires was changing its identity when we returned and, between the bodegón, parrilla and fine-dining concepts, there wasn’t much in the middle,” says Arcucci. “I also wanted to work in a nice space, not out of a living room, so we hired architects to create the kitchen we wanted at an eighth-floor apartment we rented.”

One of Anafe's popular dishes: ‘Bombe Alaska’, with a Pionono base, quince in syrup, Sambayón ice cream and meringue

First opening the restaurant Thursday to Saturday for dinner, during the week the chefs undertook taste tests, and that led to the idea of a brunch. “Doing these tests kept us alive and it was fun to bring the concept of a continental breakfast back to life. Sunday brunch really helped put us on the map,” he adds.

While Anafe became a hit with diners eager for cross-cultural dishes such as halloumi cheese with ponzu, homemade sriracha and fresh herbs salad, the closed-door restaurant was rather less popular with the residents with whom they coexisted. Anafe had gone through another growth spurt, and it was time to put down roots.

“During those last six months on the eighth floor, we were there five days a week, there was constant movement, people and deliveries… We realised we couldn't be there much longer so the situation propelled us to look for a new space,” reflects Arcucci. 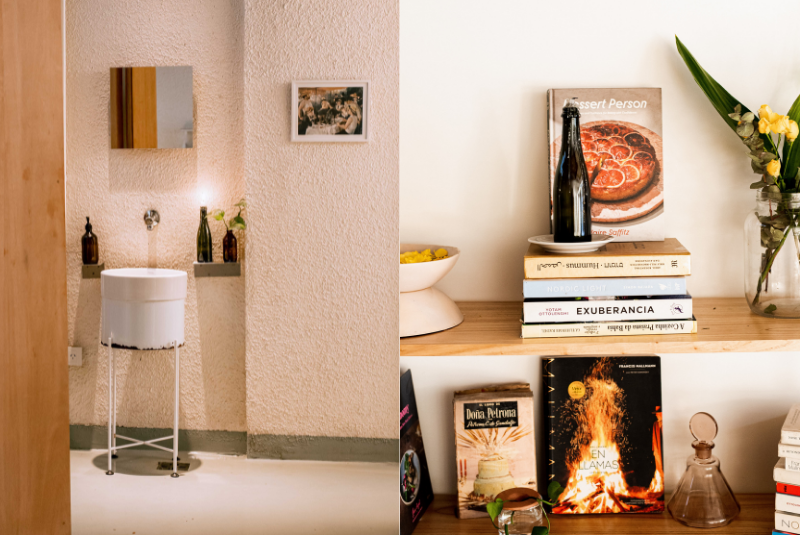 Putting down roots in Colegiales
With a great deal of care, the pair chose the leafy residential barrio of Colegiales for their first permanent location, an up-and-coming neighbourhood in the city’s dynamic food scene. “It's important to work in a lovely space with natural light, a place where we want to spend our time, which diners will then enjoy,” says  Najmanovich. “At the closed-door venue, we’d send the address and people came. They asked us: ‘How will you get people to come when you’re not in Palermo [the city’s premier food destination]?’ We believe that’s part of our identity, that it’s an experience to eat at Anafe.”

A month after Anafe’s opening in February 2020, the pandemic reached Argentina, meaning the couple had to improvise. “I’m an eternal optimist and thought it would pass fast, so we spent the first fortnight thinking about how to pay the first month’s salaries. Then, we put together a delivery menu for Passover,” recalls Arcucci.

Lockdown had various stages, adds Najmanovich, and the first challenge was how their food could become a great experience in people’s houses. “We weren’t into the idea of takeout, but some dishes were hits, such as the pâté pots and the milanesa [escalope] sandwich, while the knishes [Ashkenazi Jewish deep-fried snacks] lasted just two days on the menu, as did breakfasts. 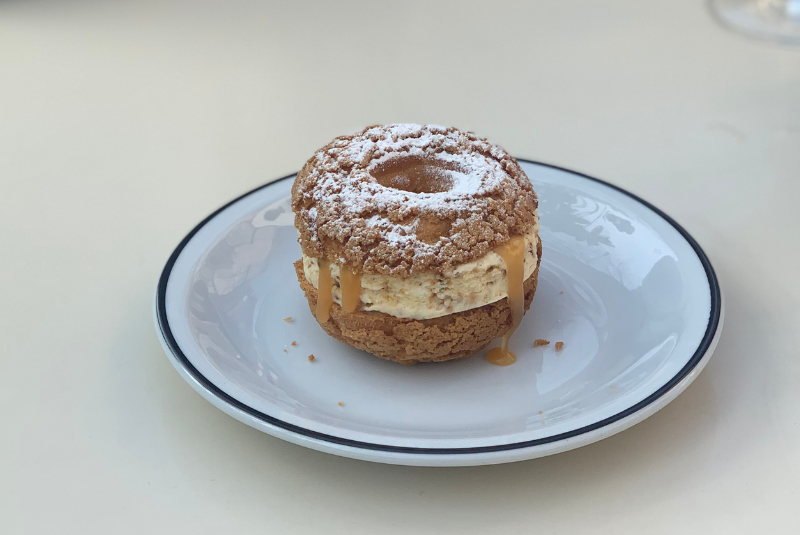 “We made adjustments as the pandemic unfurled, opening the patisserie counter, but never with tables and chairs; when serving lunch became a possibility, we prepared sandwiches, then eventually dinner. And now, we’ve finally opened the restaurant we wanted,” she says.

They call their concept cocina de ciudad, a city kitchen uniting culinary cultures with small plates designed for sharing; the menu is arranged by portion size, and from cold to hot dishes. Home-cured fish with sour cream, onion and pickled beetroot has long been a favourite, while tataki beef with nuoc cham, melon, cucumber, jalapeño and peanuts showcases Najmanovich’s Australian sojourn. Arcucci puts his experience with embers into practice with smoked gochujang glazed pork ribs or the charcoal-grilled ribeye, while patisserie techniques often ease their way into savoury dishes; think chicken liver pâté over a financier (almond tea cake) with pear chutney.

As for the future, the couple recently popped up at Turntable at Lord Stanley, in San Francisco, for a month – their first time travelling abroad to cook together – and hired space next to Anafe to set up an office and kitchen. “We need to be able to continue creating, to film videos, host private dinners and conceive new projects in order to grow,” says Arcucci. “Anafe has two sides, the public one and the private one. Both complement each other in the final experience and our philosophy is that a happy team works better — and guests can sense that. Authenticity is our secret sauce.”

Take a tour of Anafe in the video: