The chef-owner of Hof van Cleve, the restaurant currently ranked No.43 in The World’s 50 Best Restaurants 2019, sponsored by S.Pellegrino & Acqua Panna, is the leading authority on the food of his region. As 50 Best prepares to land in Flanders for this year's events programme, Goossens gives the inside line on the key dishes to look out for when the culinary cognescenti come to town

The eyes of the gastronomic world are looking to the region of Flanders in Belgium, where The World’s 50 Best Restaurants prepares to host its 2020 awards ceremony in Antwerp on 2nd June. Today, we kick things off with a guide to Flanders’ food and drink from the region’s eminent chef, Peter Goossens.

White asparagus
Between the months of April and June, much of mainland Europe is hit by white asparagus fever. With a slightly milder flavour than the green spears, Chef Goossens claims Flanders produces the best in the world. “When the season begins, I eat them every single day. Sometimes even twice a day,” he says. “For me, there is no better taste; it is so sweet and perfect. Flanders has the perfect soil cultivation to develop thin, tasty shoots.”

The key physical difference between green and white is that white asparagus is grown underground and therefore not exposed to the sunlight that causes them to produce chlorophyl, which in turn gives them their green colour. White are slightly more fibrous than green and require peeling and trimming before cooking. “In terms of the flavour [of white asparagus], it is beautifully smooth and rounded, with just hint of salt and a little hit of bitterness,” says Goossens. “The best way to eat them is simply – cook them in salted water for nine minutes and serve them with a lightly poached egg with Flemish butter, salt and fresh parsley.” 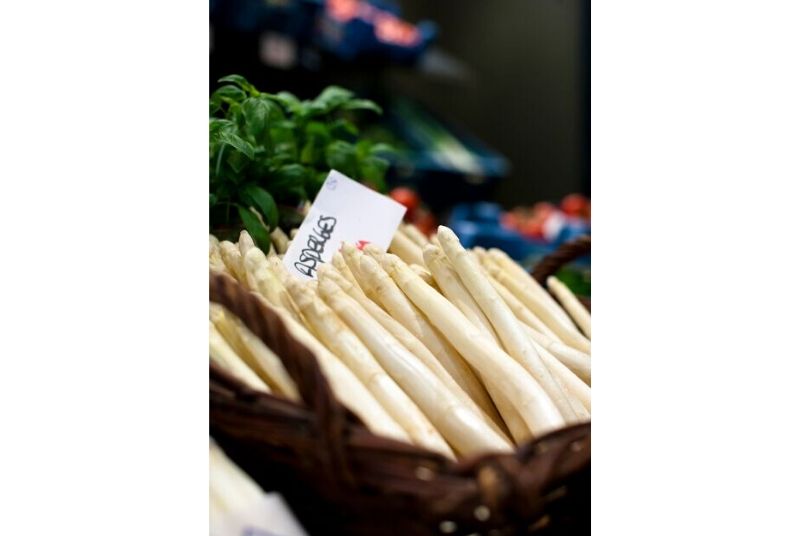 Hop shoots
For a country that produces such wonderful beer, it’s perhaps unsurprising that one of beer’s constituent parts is considered an edible delicacy. With a tiny growing season of just two months between February and April, the window to eat hop shoots is small and the process to extract them is labour-intensive and has to be done by hand. For these reasons, each year the first kilo of the season goes up for auction, where once it was sold for €1,000, giving it the title of the most expensive vegetable in the world.

“Eating these is quite literally like having spring in your mouth,” says Goossens. “They’re coming into season right now and all my cooks are very excited. We served them very simply poached in water with Ostend oysters and a sabayon made from white beer; we find the brown beer too strong.” The most sought-after come from the town of Aalst in Poperinge and hold a toothsome crunch that’s similar to beansprouts, but with a far more nuanced, almost grassy, flavour. 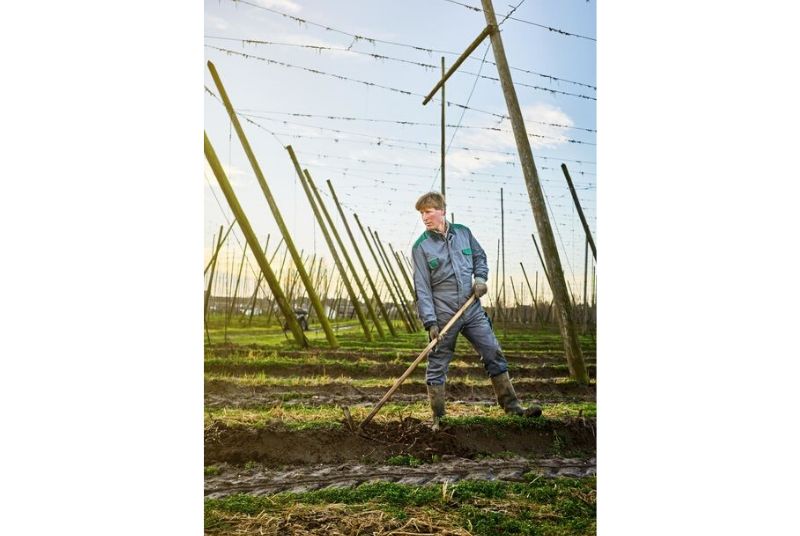 The first stage of the arduous hop shoot production processs

Ostend oysters
Bivalves are big business across Belgium. The locals – equally renowned for their healthy obsession with mussels – eat oysters by the dozen all year round. The oyster beds in Ostend are unique in that the oysters are germinated in the salt water of the sea, before being refreshed to finish their development in the water of Ostend harbour, which offers reduced salinity and a slightly cleaner flavour. “I remember the first time I tried oysters, I was a small child. And small children don’t like oysters,” says Goossens. “The taste is the pure flavour of the sea. Ostend’s variety is unique as they finish in less salty water, which makes them very delicate. They are very similar to the Colchester Rock variety in England... But in my opinion ours are better,” he laughs. “Of course, you can eat them plainly, but at my restaurant we serve them with yuzu and soy sauce.” 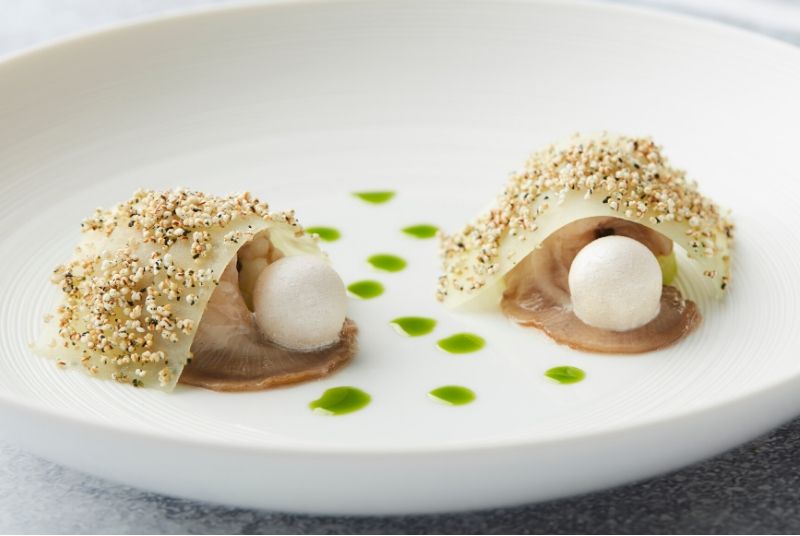 ‘Carbonnade flamande’ – Flemish stew with mustard
“We are a nation of pork-eaters,” proclaims Goossens. “For this reason, Hof van Cleve has been serving our traditional stew with pig cheeks for the past 25 years.” A true celebration of the region and the national dish, this iconic stew takes on many different guises depending on where you are in the country. In Flanders, it will always include the core local components of dark beer, mustard from Ghent and onions, another speciality of the region.

“Everyone’s stew recipe has its own identity and with my restaurant, we keep it simple with minimal ingredients,” says Goossens. “We use pork cheek, the thick, dark Tierenteyn mustard, Trappist beer and onions. Only onions. No celery, carrots or leeks like you would use in other stews. Many grandmothers will add bread spread with mustard to the pot to thicken it too, but you do not need it if it is cooked properly.” It’s best served with mashed potato or another Belgian delicacy, frieten, which brings us nicely onto...

‘Frieten’ – Belgian fries
Fries imitate art all across Belgium and they are held a similar reverence that’s reserved for Belgian beer. While 50 Best will be devoting an entire feature to these crispy, pillowy bites of pure joy in a few weeks’ time, it’s worth understanding the fierce rivalry between Belgian frieten and French fries right from the start. “French fries do not exist!” says Goossens. “Belgian fries are infinately better and French fries are just a confusion.”

He’s not entirely joking. When American soldiers who were stationed in the French-speaking part of Belgium in World War II came across the fried potato snack, hearing the French language they assumed they were in French territory. When they returned to the US touting these ‘French fries’, the misnomer was born. In 2014, patriotic Belgians successfully campaigned to have Belgian frieten accredited as a Unesco cultural treasure.

Goossens shares his recipe for the ultimate Belgian frieten: “Firstly, you need the right potato. You should change these with the season, but I like the Alegria potato the most. You peel and cut the potato and leave it to dry. Then, you must fry it in oil two times. Firstly at 160°C, then leave them to dry for an hour before frying them again at 180°C.” The emblematic Belgian accompaniment is fresh mayonnaise, though Goossens is partial to enjoying tomato ketchup with his, too. 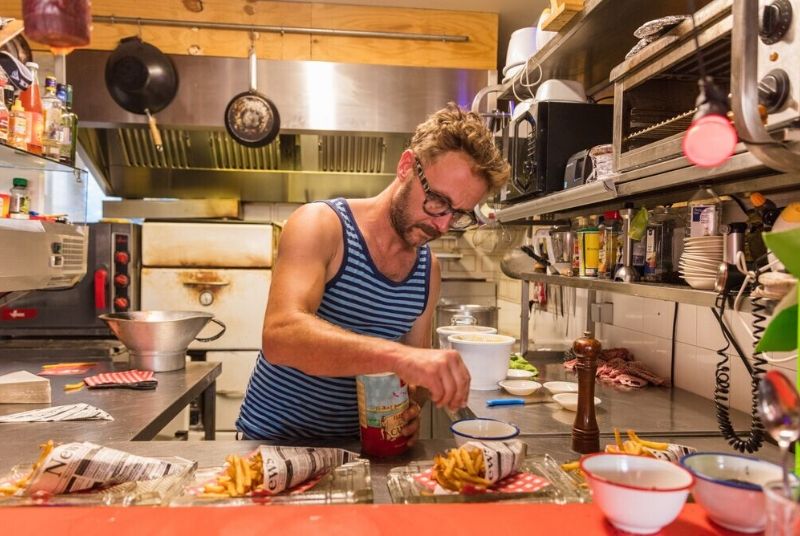 A streetside frituur in Flanders

Hare
Game meat is extremely popular all across Belgium. Partridge is one of Goossens’ top picks, although it doesn’t hold a candle to his favourite meat to work with: hare. “I absolutely love it,” he exclaims. “It is the best flavour in the world for me. When it is cooked properly the texture is so fine. I make sure to try a hare dish all over the world whenever it is on the menu and for me, no hare compares to those that we have in Flanders.

“At our restarurant we make a stew with the front legs and make a red pâté with the back legs using blood of the animal. It’s a very strong flavour so can compete well with other big tastes. Belgian endive goes very well with it and we serve it with some sweet and sour red berries.”

Beer
It would be impossible to compile a gourmet guide to Flanders without mentioning its most-famous export, beer. Brewing in Belgium has a long and distinguished history and, for a country with a population of around 11 million, it has just over 2,000 breweries. Flanders has the unique Flanders red ale, a citrussy, effervescent serve that is fermented with unusual bacteria, which gives it distinctive sour notes. 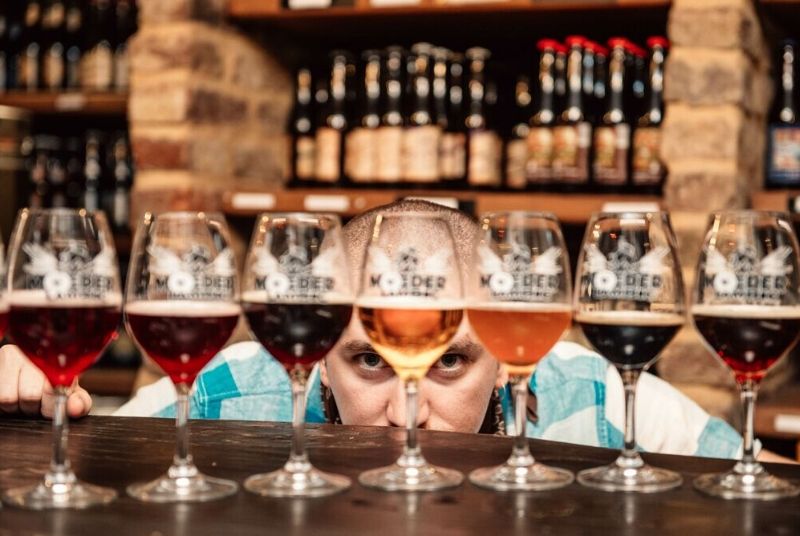 Now watch the highlights from The World's 50 Best Restaurants 2019 event programme in Singapore: