The polar opposite of a ‘celebrity chef’, an acolyte of an ancient and profound food philosophy that works in service of the body, the mind and the planet, and an advocate of the under-the-radar wonders of Korean temple cuisine – this, and much more, is Jeong Kwan. Meet the Seon Buddhist monk wowing the world with self-effacing vegan food

Jeong Kwan doesn’t cook with meat, fish or any dairy products – she says her food exists to preserve the wellbeing of planet Earth and all its sentient beings.

Her preparations eschew the five ‘pungent spices [alliums]’ (garlic, onions, scallions, chives and leeks) in favour of seasonings such as curcuma, Sichuan pepper and shiso, which she says keep your mind awake and alert, primed for meditation. In her nearly-impossible-to-buy cookbook, Baru, published in 2019, she shares recipes for the likes of lotus root with roasted walnuts and pumpkin seeds, summer napa cabbage kimchi, and bamboo shoot salad with mustard dressing.

As a rule, Jeong Kwan only cooks for her fellow seunims (Korean Buddhist nuns and monks) and the occasional visitor at the monastery where she has lived since she was 17. She has never had any formal culinary training, nor has she ever owned a restaurant or been called a chef.

Yet, her influence on international gastronomy is as deep as it is far-reaching. She doesn’t only count among her followers South Korea’s leading chefs Mingoo Kang and Cho Hee-Sook (the latter of whom won the Asia’s Best Female Chef title in 2020), but also Le Bernardin’s Eric Ripert, whose restaurant in New York is consistently voted among The World’s 50 Best. For years, she taught at Jeonju University’s College of Culture and Tourism, humbly sharing her food philosophy with aspiring cooks.

Now, the undeniable impact Jeong Kwan has been effecting on the Asian and global food scene is being recognised, with the Academy voting her as the winner of the Icon Award for the 2022 edition of Asia’s 50 Best Restaurants, sponsored by S.Pellegrino & Acqua Panna. Ahead of the awards ceremony on 29th March, when she will officially receive her trophy, the ground-breaking nun shares her story and philosophy with 50 Best. 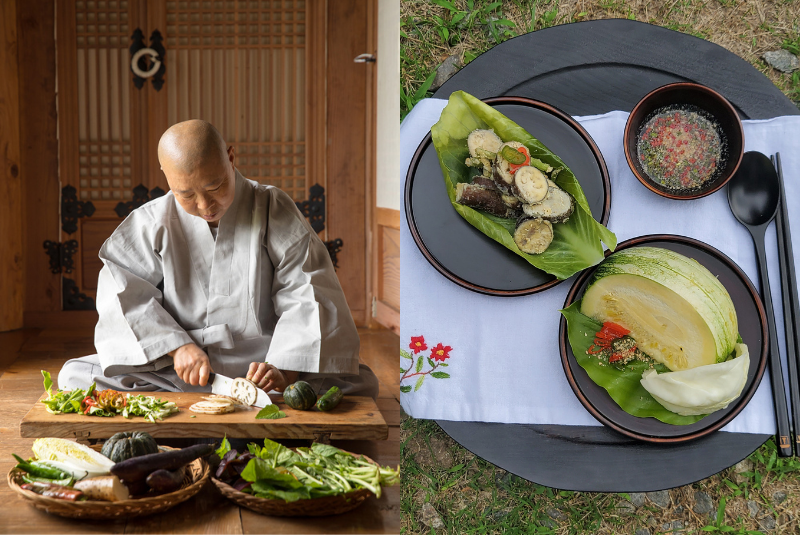 Jeong Kwan lives in the Baekyangsa temple in South Korea, where she cooks for her fellow nuns and monks

Chef by chance
In 1974, Jeong Kwan – then known by her secular name Chunjeong – left her house in the remote city of Yeongju in the North Gyeongsang province of South Korea. Still a teen, she travelled to Baekyangsa, a 7th-century Buddhist temple located on the forest-clad slopes of Naejangsan National Park. It was the beginning of a decades-long journey into zen practice that would also lead her to master the principles and techniques of temple cuisine.

What started as a chore at the monastery became for Jeong Kwan the principal way of practicing her religion. “It’s very important to understand that she’s not a chef like us,” says Eric Ripert, a fellow Buddhist. “She’s a zen practitioner who is known for her food. For her, [cooking] is a way to practice Buddhism, a way to practice what she’s learning every day and what she wants to share with the world.”

This practice starts in the monk’s garden at the monastery. Every ingredient that ends up in Jeong Kwan’s kitchen either starts its life here or is donated by visitors to the temple. “Wind, cloud, sunlight, dew: everything is together and any sentient being can join this garden,” she says emphatically. Against the principles of standard western agriculture, this means that insects are welcome, as are local wild animals, even if they may sometimes make off with a pumpkin or two. Beyond being organic or eco-friendly, Jeong Kwan’s garden exemplifies the Buddhist intention of letting nature “take care of it”. 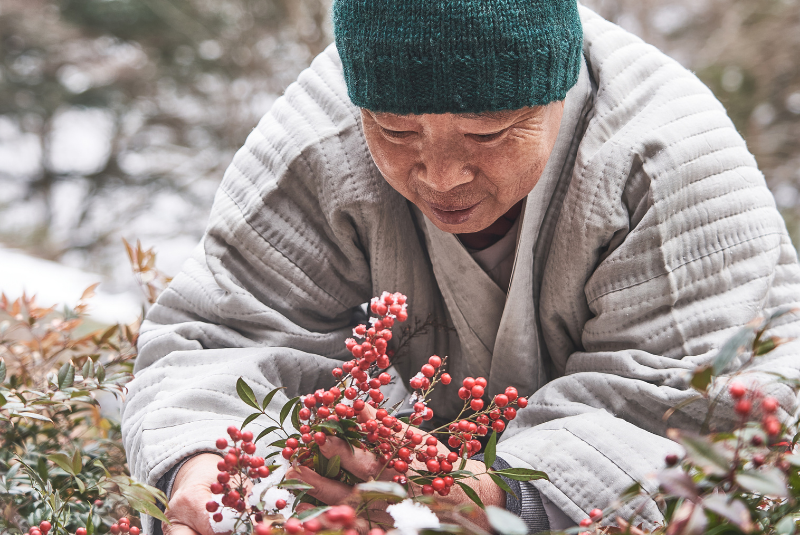 The monk says that the garden’s products are her main source of inspiration. “To me, cooking is not about being fancy or showing off difficult skills, but becoming one with the ingredients,” she explains.

This connection between cook and product is a cornerstone of temple cuisine. By applying principles of meditative mindfulness during the growing process, the cook sends positive thoughts to the plants, and in turn to the beings that the plants will feed. It’s a holistic process that continues as the food is cooked and then consumed.

“When I think of making food, I empty myself first. Understanding the nature of the ingredient, I share my mind with its nature. I think about where the ingredient comes from, how it was grown, what the environment was, how the soil was, how the weather was. From the leaves to the stem to the root, ingredients must be thought of as a whole. This can’t be learnt through culinary training, but is a constant attitude and state of mind.

“In short, when cooking, it’s more important to think of the ingredients and create in harmony than learning technical skills. The heart and soul put into the food will be received by the people who eat it and create a positive and sustainable cycle.

“Temple food is the connection that brings physical and mental energy together,” she adds. “When aubergine becomes me and I become aubergine, I can fully understand its nature and create something out of nothing.” 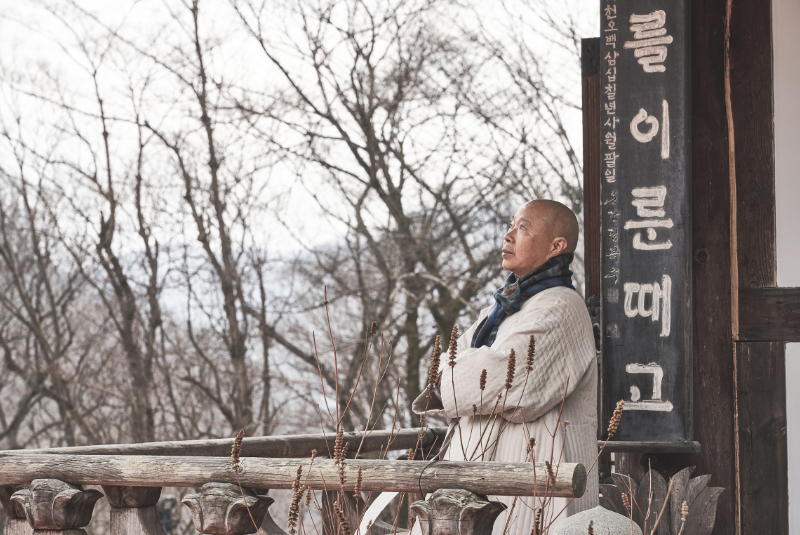 The cook applies the principles of meditative mindfulness to help her plants grow (image: Davin Park)

Bringing temple food to the world
After visiting Baekyangsa temple on a trip to South Korea, Ripert invited Jeong Kwan to cook at Le Bernardin in New York for a special event with selected guests in 2015. It was the beginning of the nun’s rising international profile, with food critic Jeff Gordinier writing of the meal in The New York Times: “Here were compositions on the plate that were so elegant they could’ve been slipped into a tasting menu at Benu or Blanca and no one would have batted an eyelash. Here were flavours so assertive they seemed to leave vapor trails on the tongue. Somehow, all of it was vegan.”

In 2017, a film crew followed the monk for weeks through her daily practice of gardening, meditating, cooking and teaching, resulting in an intimate and fascinating episode of Netflix’s Emmy Award-winning Chef’s Table series. But even as interest in her practice grew across the world, Jeong Kwan found it essential to keep a humble attitude.

“What she does has nothing to do with what professional chefs do,” explains Ripert. “It’s not about ratings; there’s no ego involved. It’s just zen practice, and her food happens to be amazing.”

In her Chef’s Table episode, Jeong Kwan is filmed saying: “Creativity and ego cannot go together. If you free yourself from the comparing and jealous mind, your creativity opens up endlessly. You must not be your own obstacle. You must not be owned by the environment you live are in. You must own the environment, the phenomenal world around you. You must be able to freely move in and out of your mind. This is being free.”

In her cooking, the monk relies on an essential ingredient often neglected in the modern kitchen: time. At the temple, she makes her own soy sauce, describing in philosophical terms the process of fermentation as the result of putting together “salt, what’s in the air and time” to kick-start a natural transformation. Soy sauce is for her “soy beans, salt and water, in harmony through time”. 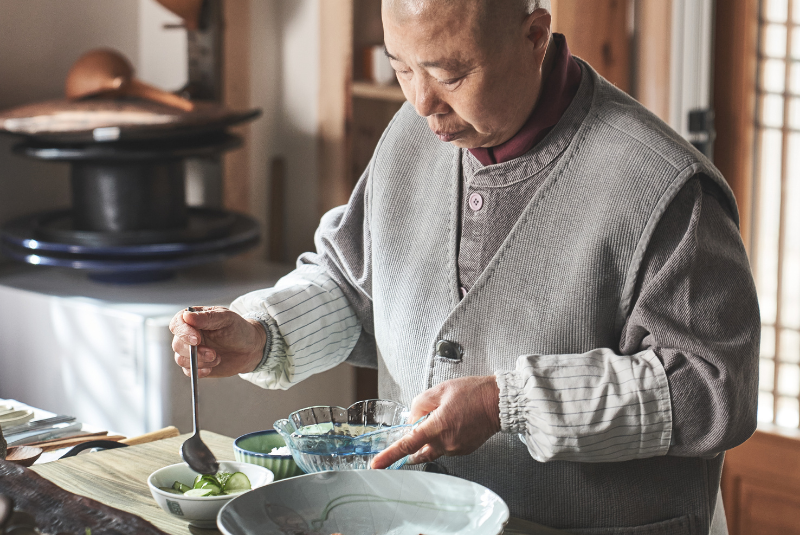 It is simple flavours such as soy sauce, chilli paste, soy paste and salt, coupled with time-intensive techniques such as fermentation and dehydration, that transform her ingredients into works of art. Though sometimes, it’s as simple as cooking shiitake mushrooms in sesame oil and soy sauce – the last dish she cooked for her father before he passed away, and the one that convinced him that a vegan diet could be as satisfying as a omnivore one.

“I believe there are no levels in cooking,” says the nun. “It cannot be categorised as beginner, intermediate and advanced. Dishes need to be pure. If the heart and mind is pure when making food, the final dish will also be pure. If you become one with ingredients and respect the natural elements, that is enough. If a three-year-old child pours their heart into making food, it can be the best dish in the world.”

Receiving the Icon Award bestowed by Asia’s 50 Best Restaurants is, for Jeong Kwan, a positive reinforcement of her beliefs. “I’m extremely honoured,” she says. “I’m a monk, not a trained chef. I don’t have a set recipe book or menu. But I’m always happy to cook for others and share positive energy through food.

“I’m grateful to Chef Eric [Ripert], the person who helped me open up. I have a hope that we can live lives that honour and respect nature and our environment, promote a sustainable lifestyle and have a positive effect on climate change. In order to do this, I need to change. Small actions start from myself. I hope I will be able to share this with more people around the world, including the wonderful chefs in the Asia’s 50 Best community.”