Clare Smyth and Andersen Lee on working at Core, improving every day and the 50 Best BBVA Scholarship

Young Canadian cook Andersen Lee, the winner of the 50 Best BBVA Scholarship 2019, is now two-thirds through his intercontinental journey completing stages at some of the best restaurants in the world. After tracking his progress at Odette in Singapore, we delve into his experience at Core by Clare Smyth in London. Smyth, who was named The World's Best Female Chef in 2018, and Lee took a break from the busy kitchen to field our questions

What is it like to stage in Clare’s restaurant?

Andersen Lee: Working at Core is super intense and it's constant running and pushing, but you get such a good feeling out of it at the end of the day. You go home and you know that you accomplished something, that you gave it your all and that you worked with a great team. What I'm going to take away from this experience will be the work ethic, how the team is constantly learning, pushing and looking to do better.

Clare Smyth: During people's time here with us in London, we don't just want to show them Core; we want to show them London too, so that they can soak up the city and what it's all about. We want them to touch on our culture, the food, the produce and what it is to be British. We've been trying to share some of that with Andersen during his time here.

AL: I also got to have a tour of Restaurant Gordon Ramsay, which was almost like walking into a sacred church. I've been dreaming of going there since I was a kid. I also had a chance to go to Borough Market and sample different British cheeses and see some of the local mushrooms, which was incredible. I got to work with edible flowers that I didn't know about, lots of beautiful garnishes and seaweeds. They bring a lot of umami to a dish and that was a new discovery for me. 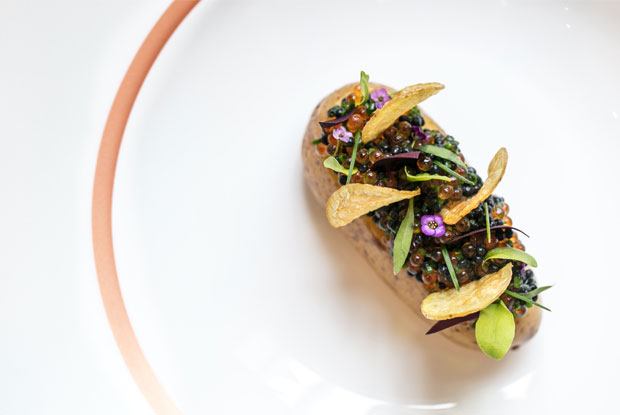 What is the most important part of the day at Core?

CS: The briefings are incredibly important for us to learn how to be better every single day. During the service, we write down all the points, mistakes and things that we could do better, as well as any ideas we might have, and we talk to the team about them the next day. It's about constant education and trying to give young chefs the confidence and knowledge to go out into the world. We try to address each point every day, learn from it and talk to everyone about what they're doing and how to solve problems, come up with solutions and answers, and we are always open to ideas.

AL: The briefing lasts only 10 to 15 minutes, but it's the golden moment of the day, because it’s when you learn the most. Everything is given to you right away and you go home, think about it and improve. I was surprised at how disciplined Core's kitchen is – it's the cleanest and most efficient kitchen I've ever worked in, but at the end of the day, it comes down to discipline and the things we learn on a day-to-day basis.

CS: Andersen is super passionate, it just radiates and you can see how enthusiastic he is to learn about everything. He's super excited and he reminds me of when I was young – it's the best time to soak everything up like a sponge.

AL: Working with Chef Clare was really fun because she brings such a dynamic to the team; she really wants to get the best out of everyone and you can see the experience that she has from various other restaurants, including Restaurant Gordon Ramsay.

How do you work with the rest of the Core team?

AL: When I first stepped into the kitchen at Core, it was absolutely electric. I will take good memories of the collective emotion of everybody coming together. When one station is having a bit of trouble, someone is always there to help and the team dynamic is really impressive.

CS: As the leader of the team, I try and transmit respect for produce, professionalism between the members of the brigade, respect for the guests and the constant desire to be better every day and to grow as individuals. People's individual personalities within the team are very important to me. That's what makes a team fantastic – seeing each character add colour and depth to the group.

AL: I was also very impressed at how the kitchen works with the front of house. The cooks are so involved in the front of house, they learn how to act in the dining room, how to do a chef drop and explain dishes properly. 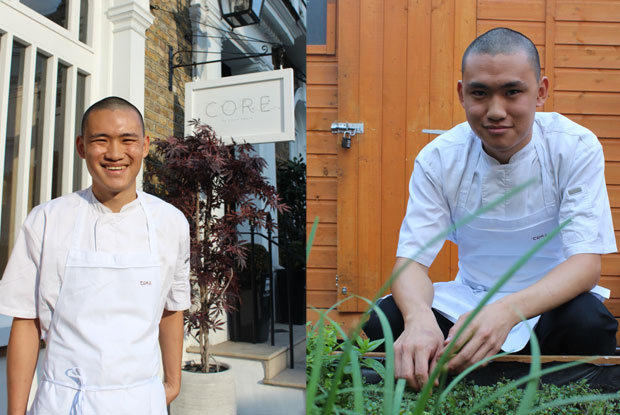 Lee in front of Core and working in the restaurant's garden

From your insider perspective, how would you describe Core’s food?

CS: The style of Core's food is modern British fine dining, but it's very much driven by product, history and culture. Some of the menu development we're doing now comes from Victorian ideas – the old and the new coming together is something I love to play with. Andersen  has been working on the development for some of the new dishes and that is something I really wanted him to do, to understand how we create a dish and what our ethos is, where the ideas come from.

AL: I've been working on a new dish called beef and oyster. I knew that it would take a lot of hard work to get a new dish onto the menu, but I didn't know how much time and effort is put into it. For me, the food at Core is really humble; it’s the people’s food taken to a new level and it's also historical food that is modernised.

CS: Core is just entering its third year, which is a big one because I want to continue on with the same pace of evolution that we've had so far. We have lots of plans in the pipeline, so if you [Lee] come back in one year's time, you'll see lots of physical changes and you'll hopefully see some of the new dishes you've been working on becoming stars.

What is like to be involved in the 50 Best BBVA Scholarship?

AL: The 50 Best BBVA Scholarship is a great opportunity for aspiring cooks to work in world-class restaurants and to see the world, go to three countries across different continents and work at such high level. If I could give some advice to future applicants, it would be not to be shy and to really go for it. Take your time, think about your answers, take it seriously and give it your all – but most importantly, surround yourself with people you can bounce ideas off, and just do it!

CS: I think this Scholarship is just the most incredible opportunity for a young person to be able to travel the world and work at three distinctly different restaurants and countries. It's something that as young people we often don't get the opportunity to do – to be able to have a voice and connect with people. It's actually all about Andersen and how he has been since he's been with us – we're never going to forget him, his reputation starts from now and already it's going to be global. He's always going to have us to reach out to in the future.

Header image: Smyth and Lee at Core; the restaurant's bar

Now watch the video interview with Smyth and Lee: