Canadian chef Andersen Lee was the lucky winner of the 50 Best BBVA Scholarship 2019. He recently completed the first of his three six-week stages at Odette, the Singapore-based restaurant ranked No.1 in Asia’s 50 Best Restaurants 2019. His next two placements will be at Core in London and Quintonil in Mexico City. Here, he shares with us what he took away from working with Julien Royer and what impressed him the most about his kitchen

The most significant thing I learnt at Odette is how important positive kitchen culture is. There are 15 or 16 chefs and pastry chefs in the kitchen and they work 70-hour weeks, but there’s never any yelling and everyone is happy. The three sous chefs always try to create a good atmosphere in the team. I was more impressed by this than by any cooking technique that I learnt there.

In the kitchen, they’re very patient, they explain things a lot, they make sure you’re not too stressed and if you are, they crack a joke. The team also has outings once a month, like barbecues and meals out together – it’s a nice team chemistry.

My favourite dish to make was the crab. Chef Julien has a crab dish with apple, ginger, wasabi sorbet and this green apple jelly on top. When I was making it, I thought it was a very beautiful, simple and elegant dish, and it looks very interesting. But when I ate it – the temperature and the balance are incredible; it’s a perfect dish. It was fun to make and fun to eat, too. 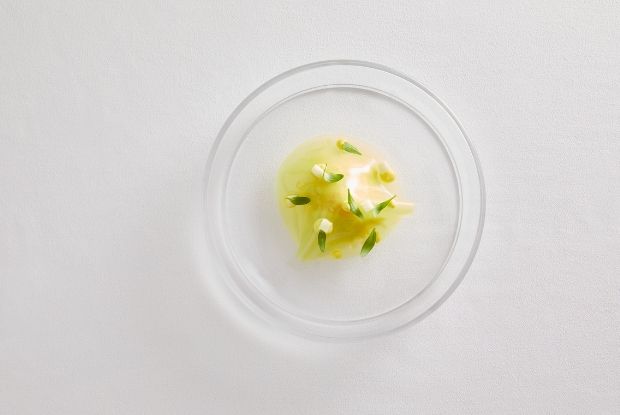 Chef Julien is at the restaurant all the time. The first week I got there was the week after The World’s 50 Best Restaurants 2019, so they were working like crazy. I got to see how he runs the show, and after that I got to speak with him a bit. We had a tea and talked.

The chef gave me a lot of advice on which direction I should head into with my career and the importance of mental health. We talked about the 50 Best BBVA Scholarship and how I must use this experience to my advantage to inspire future recipients, but most importantly, to teach those around me. The chef made me realise the importance of staying active. Ever since, I've rediscovered my passion for playing basketball and hiking.

I was very curious as to what makes an Odette dish. Sometimes the dishes have multiple proteins, some vegetables and three different sauces, while other dishes are just like a pigeon breast with garnish on top. I asked Chef Julien and he said they all have the ingredient as the star of the dish, without changing the texture or the flavour too much. The secret is just to make it familiar for the guest and not overcomplicated.

I was impressed at how they used molecular gastronomy. The cooking is very advanced, but it is never just using technique for technique's sake. I had never worked with thinning agents or foams before, and they’re almost in every dish. At the same time, it’s not too crazy: the chef incorporates modern cuisine with old school techniques and at the end of the day you feel comfortable eating the food. 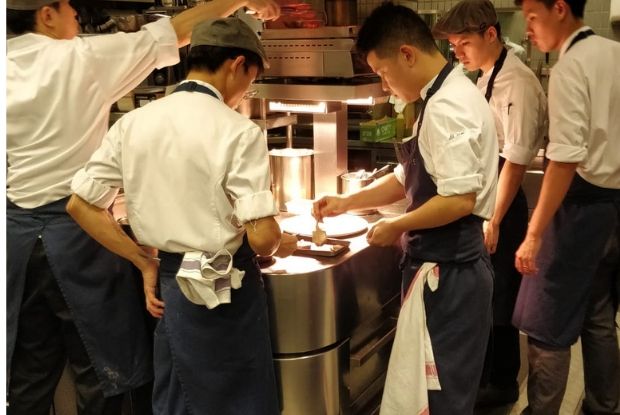 Lee in the Odette kitchen

I went for lunch at Odette with my friends and I was blown away. I had been cooking the food for a while, so you sort of imagine the taste and the texture, you take it for granted. Then, you’re sitting in the dining room and it goes to another level; every single dish is incredible. The food was great, but I was really impressed by the service. The guys were amazing, they were talking to us and cracking jokes, they really take care of every guest individually with a personal touch.

The first two weeks were pretty hard. I was getting used to everything, but I was also very homesick, I was thinking that I left everything in Montreal. I was sad and I was missing my girlfriend… Then, I had a talk with the sous chef and he told me I shouldn’t worry about it too much.

By the third week, I felt that I started to perform at a higher level and that was really fun. Towards the end, I felt that with the brigade, on a personal level, we were more than just colleagues, we were friends.

When I talked to Chef Julien, he told me about the sacrifices that come with this profession. In the third and fourth weeks, I started to realise that I dropped everything to go on this adventure. I learnt that the first few years you have to work really hard, and I started to feel happier at work. I realised that Montreal may be home, but I should enjoy the moment in Singapore, no matter how scared I was at first.

I would definitely recommend Singapore – it’s like an introduction to Asia. It’s very western and you get to see lots of different cultures like Indian, Pakistani and Thai, and it is very safe – people go to hawker centres and they leave their wallet and phone on the table.

At the hawker centres, you can eat local food for two Singapore dollars. I was eating chicken rice and lots of local dishes that are super interesting. I was inspired by laksa and dishes like these because they are super simple, they are just like family recipes. 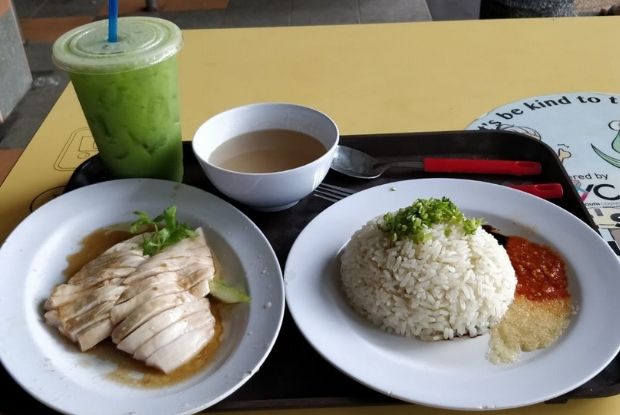 Singapore’s most underrated national dish is fish cakes. Back in the day, they used to be made of fish meat turned into a purée and poached. It’s so simple, but it turns fish into something that has a bite to it and a good finish, you can put it in a soup and it just makes everything taste better. I was very inspired by the traditional way they used to make them. Nowadays, they put everything into a blender, but this breaks down the fibres, so you then have to add egg and flour as a thickening agent. But there are still a lot of handmade fish noodle soups in every hawker centre – they cost about two dollars and they are incredible.

Working at Odette has been a great introduction to The World’s 50 Best Restaurants. As much as the food is familiar, it’s modernised and it’s French so it’s everything you learnt in cooking school, but made in a very fun, new way of working. It was definitely a highlight because of the way I was treated and how much there is to learn without fear or stress.

Lee is now working at Core by Clare Smyth in London, UK, for his second stage as part of the 50 Best BBVA Scholarship 2019. Stay tuned to follow his adventures with chef Clare Smyth and then with Jorge Vallejo at Quintonil in Mexico City.