New York State and much of the United States has been in lockdown for over two months, which has given Blue Hill at Stone Barns chef Dan Barber a chance to step back and think. His reaction to the topic on everyone’s lips – whether restaurants will survive the coronavirus pandemic and what they may look like once they reopen – comes from a different point of view than most. As he explains the different ways he’s looking to save independent farmers, the chef reflects on what’s at stake for the food world and proposes a movement to protect independent agriculture

Before it was forced to close, Blue Hill at Stone Barns – located approximately 30 miles north of Manhattan – operated as an idyllic farmstead restaurant attached to the non-profit educational space Stone Barns Center for Food and Agriculture. Chef Dan Barber served a 30-course tasting menu centred on produce, long at the forefront of the farm-to-table movement, and was recently found designing his own, better-engineered, extra-flavourful vegetables from bespoke seeds.

Thanks to the close relationship he had built with farmers, fishermen and a whole host of small producers in the area, Barber was well positioned to feel the impact of the sudden nationwide restaurant closures on small, independent suppliers. What he didn’t expect to realise, however, was how vital a role restaurants such as Blue Hill at Stone Barns played in supporting organic, high-quality agriculture. This realisation set him on a path of investigation, problem solving and crafting solutions.

“Restaurants need to understand how powerful they are,” says Barber. “Before this, I certainly didn’t understand it to the extent that I do now. If we don’t react quickly, we will find ourselves without the right sourcing options for our environment, our health, our enjoyment, and for flavour and deliciousness. That’s what’s at stake. That’s why it’s a critical moment – and we have a choice.”

Now, the chef is spearheading a worldwide mobilisation programme for out-of-work cooks and everyone who wants to raise awareness about the flaws in the food system. Everyone can get involved in this initiative, named the Kitchen Farming Project. But the journey that led him there took a few steps…

Talking to his producers during the lockdown, Barber realised that Blue Hill at Stone Barns was a critical end point of the supply chain, often buying between 50% and 100% of a farms’ produce. “We were concerned not only with the amount of ingredients and food we had at our restaurant ready for serving, but also with a core group of farmers who relied on us for sales,” he recalls. 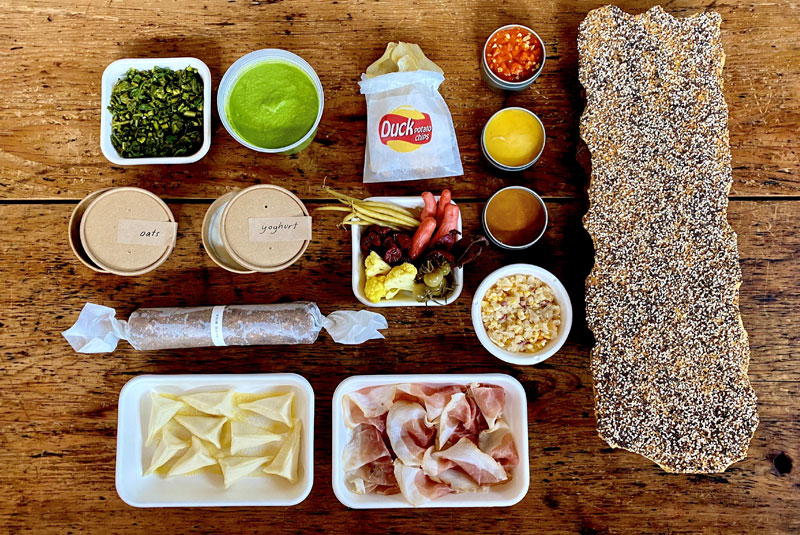 The contents of one of the resourcED boxes

His solution – one that he quickly instituted in April and that is still extremely popular – was to create a marketplace to help sell his farmers’ ingredients, a model that has been spreading around the globe. With nine different boxes available to buy, providing everything from fish and bread to cakes and pastries, Barber created a valuable avenue to help producers maintain a part of their income. But for the visionary chef, this wasn’t enough.

Rather than stopping the moment he was able to help his core producers, Barber set out researching how bad the problem was at a wider level. “Our core group of farmers seemed to be in real trouble, so I wanted to know if there was a larger story to it,” he says. “We came together and asked ourselves, what if we sent out a survey to farmers in our region? This then went national, and we’ve had responses from over 500 farms across the US.”

The survey asked producers a simple question: if sales to restaurants are down 50% through August and September, and sales at farmers’ markets are also down 50% due to social distancing regulations, where does that leave you? “For between 30% and 40% of the farms, the answer was bankruptcy,” says the chef. “That’s an extraordinarily high number and what it points to is a catastrophe.”

Surveying a variety of farms that produced everything from vegetables to poultry, cheese and flowers, the chef discovered that over a third of the producers were suffering from an average 50% revenue decrease compared to 2019, and that many were struggling to cover expenses, being forced to cut payroll or take on debt. 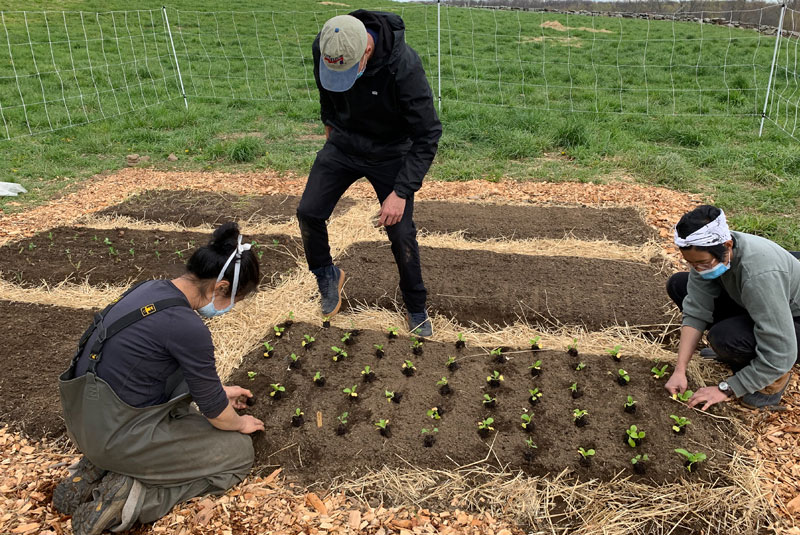 “What this shows is the power of restaurants to preserve and promote the kind of farming that is absolutely critical from an ecological, environmental and health perspective,” reflects Barber. “These farms are a leading light, a compass for young producers looking to farm. Realising this was like looking at tsunami from the shore when it’s still a couple of miles away. If we don’t raise awareness now, this will impact a whole generation not only of small famers, but also of chefs and their ability to create interesting, diverse, regional and local gastronomic offers.”

In Barber’s mind, two things were happening that he didn’t like: with the restaurant closed, his cooks were shuttered at home “laying on their couches watching YouTube and wasting time”, and the farmers these cooks used to support with their work at Blue Hill at Stone Barns were at risk of not surviving the pandemic. “I thought to myself: what a powerful moment to make a statement about what’s possible with these cooks,” he says. “If they can’t fit into our kitchen, then they can certainly get out into an open space of land and get productive and, at the same time, activate their interest in food in all the right ways.”

Barber handpicked three of his out-of-work cooks and gave them a new purpose: to be the activists leading a change in consciousness in how we think about the food chain. Each was given a patch of land and a step-by-step ‘recipe’ written up by Stone Barns farm director, Jack Algiere, on how to grow their own food, and all got to work designing their gardens, shaping the beds and planting seeds.

The stories of these three cooks – Pruitt Kerdchoochuen from Thailand, Bronson Petti from the US and Chuan-Chieh Chang from Taiwan – are now being told in a series of videos on the Stone Barns Center for Food and Agriculture’s YouTube channel, creating a sort of reality show that follows their journeys learning to farm while also teaching anyone in the world how they can do the same. Each of the chefs is taking a different approach to their kitchen garden, with Kerdchoochuen focusing on growing peppers for hot sauce while Petti experiments with dry rice farming. 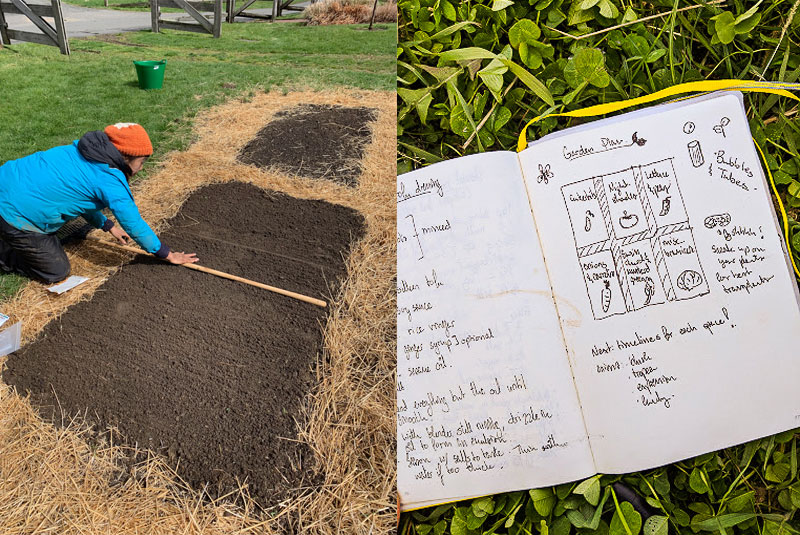 A cook seeding their patch of land and a garden journal

The real potential of the Kitchen Farming Project is in its accessibility and global reach. “This moment is an inflection point,” suggests Barber. “If we don’t activate our interest in good soil, good seeds and cultivation done the right way, then we’ll have a lost a real opportunity.” When the chef put out a call to the world, the response was overwhelming. Over 2,500 cooks from 65 different countries have already signed up to create their own kitchen gardens and participate in the project, and anyone can get involved by simply filling in an online form. All that is needed is a small garden space and some basic tools. In return, Blue Hill sends a step-by-step 'recipe' to create your own kitchen garden, in conjunction with the video guides they have already been sharing.

“I don’t know where this goes,” admits the chef. “We are going to carry through and watch the cooks harvest the food, watch them cook with the vegetables and engage with them during the course of their yield. Ultimately, the Kitchen Farming Project brings awareness to the people who grow the food that we eat. Everyone will be able to see the connection between our cooks doing it and the farmers at the farmers’ market doing the same behind the scenes.”

At this unprecedented moment for the whole world, Barber wants to plant the seeds of a new food consciousness with small farming at its heart. By spreading the movement around the world, the Kitchen Farming Project can promote and protect the reality of small, organic and independent farmers on a whole new level. This is why the chef wants you to get involved.

“Everyone can sign up; it’s free,” he says. “Just let us know that you want to do it, and we’ll email you the recipe.”

Visit the Restaurant Recovery Hub and the Bar Recovery Hub to explore useful resources and read the stories of chefs and bartenders around the world. Follow 50 Best on Instagram, Facebook, Twitter and YouTube to discover positive initiatives by the worldwide hospitality industry.

Header photos: Dan Barber (image: Christina Holmes) and Blue Hill at Stone Barns (image: Ingrid Hofstra). All other images on this page are courtesy of resourcED.