As he launches seed breeding company Row 7, Blue Hill at Stone Barns chef-owner Dan Barber is set to revolutionise the relationship between cook and farmer with a view to bringing flavour-packed vegetables to the wider public.

Dan Barber, the chef known for putting vegetables centre-stage at his restaurant Blue Hill at Stone Barns, is about to take his commitment to farm-to-table dining a step further. Through experimentation with seed genetics, Barber and a team of other chefs, farmers and geneticists have created seven new breeds of vegetables, from squash to potatoes and peppers, that promise to deliver better flavour and productivity than anything currently available in the United States.

“It takes the idea of farm to table and moves it forward by broadening the conversation to include seeds,” says Barber, whose company Row 7 will sell individual and bulk seed packets.

Barber’s interest in seeds was planted 10 years ago after a conversation in his kitchen with Michael Mazourek, a butternut squash breeder. When Barber asked Mazourek why he didn’t make a squash that tasted good, the breeder responded by saying that nobody had ever asked him to breed specifically with flavour in mind.

“That’s when it struck me that we had an opportunity, and maybe a responsibility, as chefs to have a conversation with the people who were writing the original recipe for how something will taste,” Barber says. Ten years later, Mazourek’s Honeynut squash is sold coast to coast at every major farmer’s market and supermarket. “It was bred for farmers to make money growing it but it also has exceptional flavour. There’s a world where those are not trade-offs – you can do both.” 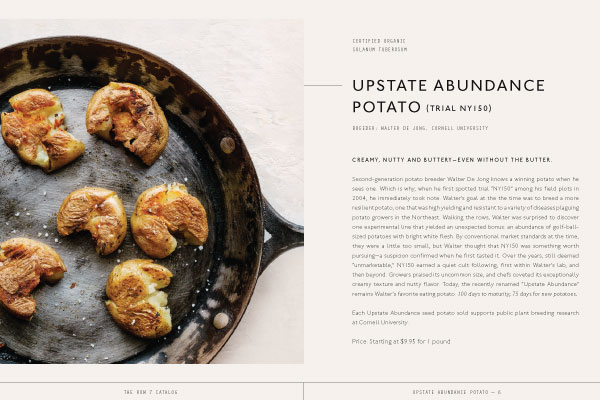 Barber’s initial catalogue of seeds includes seven varieties, among which are the Habanada Pepper, a version of the habanero chilli with melon-like sweetness but much less heat; Upstate Abundance Potato, which is “creamy, nutty and buttery – even without the butter”; and 898 Squash, a small squash based on the Honeynut with even more flavour and beta carotene. Prices begin at $4.95 for 12 seeds of the 898 Squash or $9.95 for a pound of the potatoes. Barber’s plan is to make his flavour-packed vegetables available to everyone in the US and eventually the world.

“The goal of the company is to democratise the seed so that it ends up in your kitchen or on the supermarket shelves,” says Barber. “We’re not just doing the top, white-tablecloth restaurants. We’re looking at this in a regional and very diverse way.”

Eventually, the plan is to roll out the seeds beyond the US, which will require testing in different climates and environments around the world. Barber is in touch with other likeminded chefs from The World’s 50 Best Restaurants lists and beyond, including Dan Hunter from Brae and Ben Shewry from Attica in Australia, Alain Ducasse in France, Rodolfo Guzmán of Boragó in Chile and Jorge Vallejo of Quintonil in Mexico. He cites Peruvian chef Virgilio Martínez of Central as a cook with a similar mindset – Martínez and a group of farmers are involved in repatriating old potato varieties at different altitudes. 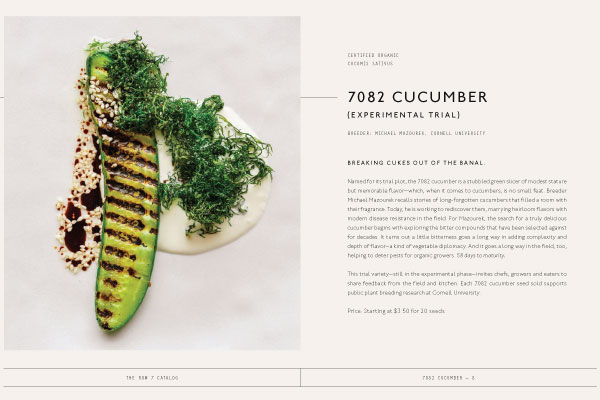 Barber is quick to clarify that his manipulation of vegetable genetics is not genetic modification, or GMO crops – in his words it is “old-world breeding with modern technology”. While genetic modification may involve the manipulation of genes that would never otherwise meet in nature, Barber’s Row 7 is about using genome mapping to predict how genes in squash or another vegetable will respond to each other and putting them together to create the best flavour.

Barber’s most famous dish is perhaps the carrot steak, where carrot replaced meat protein as the focus of a course or even a meal, and the dish spurred copycats all over the world. Blue Hill at Stone Barns is not a vegetarian restaurant by any stretch, but its commitment to using the produce from the onsite farm in Pocantico Hills, in New York’s Hudson Valley, means that entire sequences of courses are heavily focused on seasonal greens and leaves picked straight from the garden.

In the last few years, Barber has written a book, The Third Plate, on food ethics, he has advised President Barack Obama’s government on nutrition and he launched the wastED pop-up dinners series in New York and London to help educate diners on reducing food waste. While Blue Hill at Stone Barns, No.11 in The World’s 50 Best Restaurants 2017, is only accessible to those who can afford its $258 tasting menu, Barber is adamant that his seeds will be available to the general public.

“People tell Thomas Keller that they ate his carrot dish at The French Laundry, went home and cooked it according to his cookbook and it didn’t taste the same,” Barber recounts. “He said of course it didn’t taste the same because they’re not using the carrots that I’m lucky to be using – and this company is the answer to that. Why can’t people use the same carrots as Thomas Keller? There’s no reason why not, if you breed for it. But you have to ask for it and you have to have the support. That’s what the investors and chefs involved in this project are doing.”