Fighting prejudice. Feeding the planet. Breaking down barriers. These are just some of the themes that chefs from all over the world highlighted at the events around the announcement of The World’s 50 Best Restaurants 2019 in Singapore. The latest edition amplified a paradigm shift that has been a long time coming, proving that if chefs really have achieved the cultural status of celebrities, then they are ready to set the example for many other icons in society.

Daniela Soto-Innes is at the forefront of this shift. The 28-year-old could have been hindered by the tags that have frequently been attached to her: an immigrant to the US, a Mexican, a woman, too young for her success. Instead, however, she has turned her background and identity into the core of her strength. At Cosme – the New York restaurant that was just voted No.23 in The World’s 50 Best Restaurants 2019 – Soto-Innes runs a gender-balanced kitchen famous for its energy and joy, where men and women of all backgrounds and ages work together to create an environment that is as happy as the chef wants her guests to be.

Accepting her prize as The World’s Best Female Chef 2019 at the awards ceremony at Marina Bay Sands on June 25, Soto-Innes gave an inspirational address, reflecting on her heritage, her experience in restaurants in the US and calling for happier workplaces all over the world. Read her speech below and stay tuned for the equally stirring words of José Andrés, winner of the American Express Icon Award 2019.

“Buenas noches a todos. I’m really grateful that this year, my friends gave me the opportunity and the platform to represent my thoughts not only as a chef, but as a human.

I was born in Mexico City. Before I could talk, I was polishing my great-grandmother’s pots and spoons. So yes, I grew up in the kitchen. There were constant conversations around baking and cooking, but the most important thing was to always have joy when you were in the kitchen. 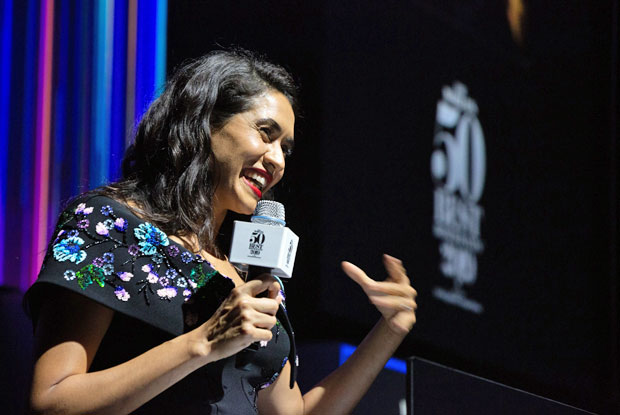 I started cooking professionally, but soon I found out that happiness and good energy were not the standard in any of the kitchens where I worked. I quickly realised that the hospitality field was sometimes the least hospitable place to work in; that although chefs were making their guests happy and creating amazing memories for them, they were doing the opposite to their own teams.

I was very disappointed. I decided that if I ever ran my own kitchen, it would be more like the kitchens I grew up in: full of happiness and community. I promised myself that I would create an environment that could be as pleasant for the person developing the idea as for the person receiving it. I didn’t believe happiness in the front of the house should mean misery in the back.

The fact that I’m here proves that it is true. To me, the role of a chef is that of a leader, a balancer and a team builder; someone who seeks to inspire by learning something new every day with their team. With discipline, communication and grace, we can inspire the success of each individual. A chef is not only the one who cooks, writes menus or develops recipes, but also the one that listens to their team, takes care of them and learns how to treat each person individually so they can fulfil their highest potential.

Today, I’m happy because I know that with this platform I’m making our team proud, not only of me, but of themselves. We’re hungry to grow as a team, to make changes not only to the kitchen and the restaurant, but beyond.