A true culinary leader giving a voice to the under-represented

“Food is my platform,” says Dominique Crenn simply, but few individuals have utilised and built on that platform in such effective and myriad ways as the French-born, San Francisco-based chef. Indeed, to define Crenn by her role as a professional cook is almost too limiting; she may be one of the finest chefs in the world, but she’s also an activist and campaigner who effects genuine change in society. In the gastronomic sphere and well beyond, she is an Icon, hence the bestowing of this award as part of The World’s 50 Best Restaurants 2021 programme.

Now 56, Crenn came relatively late to the culinary world after moving to California from her native France in her mid-20s. There she found a new freedom to express herself that had not been so apparent in the more conservative confines of the French gastronomic world. She spent almost two decades working for others, including the great Jeremiah Towers at Stars in San Francisco and the Intercontinental Hotel Group – heading up one of its Asian hotels in Indonesia – before opening her own place in 2011.

Atelier Crenn, located in San Fran’s Cow Hollow district, allowed Crenn to unleash her imagination as she developed her inimitable ‘poetic culinaria’ approach, whereby a traditional menu is replaced by a poem penned by the chef that reflects the narrative and emotion of the dishes. The restaurant was an immediate hit, gaining first one, then two and finally the fabled three Michelin stars over the following years and entering The World’s 50 Best Restaurants ranking in 2019. It continues to offer a truly standout multi-course dining experience in its intimate space, fed by sustainable produce from the chef’s own farm in the Sonoma Valley.

Crenn opened a second more casual bistro, Petit Crenn, in the city in 2015, inspired by the home cooking of her mother and grandmother back in Brittany, France. Bar Crenn, a wine bar situated next door to Atelier Crenn, was added to the chef-restaurateur’s portfolio in 2018.

But it’s beyond any of her establishments’ doors that Crenn perhaps has the most telling influence. She has long spoken up for what she believes in – inspired in part by her politician father – but in recent years her voice has been amplified and her scope broadened. She is an articulate champion of women’s rights, of workers’ rights, of sustainable practices, of the LGBTQ+ community, the BIPOC community and even the cancer community (she was diagnosed with breast cancer in 2019 and is currently recovering from treatment).

Crenn backs her words with actions: during the pandemic, she and her team cooked and served thousands of  free meals for those most in need; she is helping to drive policy change around labour laws for the hospitality sector; she removed meat from Atelier Crenn’s menu in 2018 and is researching more ethical long-term alternatives; and advocating for a fundamental rethink of our food systems from chefs, producers and consumers alike.

Her motivation is simple. “I want to forge a better future for the new generation,” she says. “I’m grateful for the platform I’ve been given and it’s my responsibility to help others.”

Not only is the winner of this year’s Icon Award an outstanding chef and restaurateur, she is an example of someone who speaks truth to power in every aspect of her life. More power to Dominique Crenn.

Discover Dominique Crenn's story in our article and watch the video: 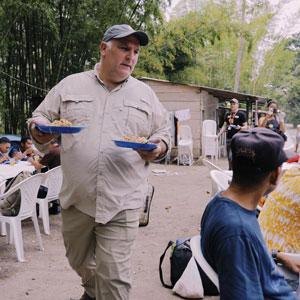