Like the flower after which her restaurant is named, Pía León is set to bloom when she unveils Kjolle at Lima’s brand new Casa Tupac on August 10. After a decade cooking at Central, the three-time No.1 in Latin America’s 50 Best Restaurants, alongside her husband Virgilio Martínez, Latin America’s top female chef reveals everything you need to know about her début project in the Peruvian capital’s Barranco neighbourhood.

Mauka is one of many little-known ingredients served at Kjolle

“We’ll be working more with vegetables at Kjolle (pronounced koy-ay) overall. I’m investigating some projects with Mater Iniciativa, which is how we obtain information to create concepts, that Central hasn’t been able to revise and we want to show off in Kjolle. One example is mauka, a root that’s no longer used in Peru but has adapted really well to both Andean and Amazonian soils.

“I’ll be using lots of seafood plus I love tubercles so I want to take a fresh look at them. Mater’s work with herbs is very important so there will be plenty on the menu. I love citrus fruits from the Amazon, products that Central doesn’t necessarily use, while corn on the cob is my all-time favourite ingredient.”

“My diners will see Peru; ingredients will be 100% Peruvian and it’s a freer concept, less structured and bit messier, than Central. There isn’t a menu but there will be seven courses, showing off a concept with ingredients from all around the country.

“Kjolle will showcase Peru’s nature. If it’s orange season and I’m feeling inspired, I’ll get some incredible ones that are sourced from just 20 minutes away. I want to work on a day-by-day basis, have fun and play around.”

“We’ve planted an orchard at Casa Tupac and introduced coastal species such as leaves, sprouts, aromatic herbs and anything that we can use in both Central and Kjolle. There’ll be lots of flowers too, as I love cooking with them, as well as mustard from the mountains and mashwa leaves (Tropaeolum tuberosum), little chile peppers, oxalis, huacatay (black mint), lemon verbena and muña (similar to mint).

“My son Cristóbal, who’s two and a half, loves gardening and plants so it’s really nice that he can also be involved. He brings me a flower every time he goes to the park, so I wanted to create a space for him so he can play at being gardener. He loves garden cress and making people eat them.”

Most of Kjolle’s team has worked at Central

“The idea is to maintain the same group as always and between Central and Kjolle, we’re hiring around six new staff members. I don’t tend to focus on whether cooks are men or women; it’s simply about the fact that they do a great job. Virgilio and I have given them a choice and lots have said they want to work with me rather than him! Of course, many want to stay with Central. That said, they will rotate every six months.”

The name stems from a flower

“Kjolle is a flower that grows at very high altitude and has yellow flowers, my favourite colour [she wore it at The World’s 50 Best Restaurants awards ceremony in 2018 in Bilbao]. I love it and will be using it somehow.” 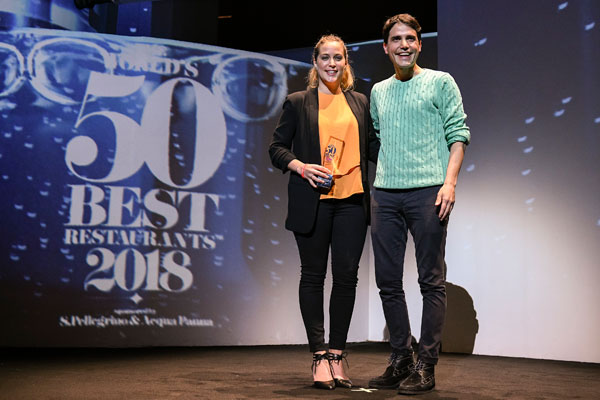 There are no tablecloths

“The space is going to be warm and welcoming, warm colours, with lots of plants and light, thanks to the windowed terrace. It will be free and fun, and there won’t be any tablecloths. Everything we’ve used to build Kjolle is 100% Peruvian, from the wood to the stone. Stone – and onyx in particular – comes from Ayacucho and Junín, Andean areas. We’ve used cedar and capirona sourced from the Amazon since the beginning for our dishware, but now these woods will play a new role in décor.”

“As I like to create things from scratch, I’ve helped design dishware, which will mainly be ceramics but some wood will also be involved. It’s meant to be very personal, down to the teaspoons and dessert spoons. Colours are fundamental, and there won’t be sober colours but pinks and yellow, which I adore. After eight years working at Central, which I love, it’s time for me to stir things up!”

“I love beer so there will be plenty of that on the drinks list, plus we’re working on cocktails featuring Amazonian fruits plus things we produce, to give added value. You’ll also find classics, of course, but the idea is to use what we already have.”

Her husband has been involved to a certain extent…

“Virgilio and I are husband and wife so what he does influences me and vice versa. His opinion will always be important to me. At Central, I’ve always been present with regard to menu changes, but at the end of the day it’s his restaurant. And, while we’ve worked on Kjolle together, it’s definitely more ‘Pía’, more me, and I’ll be leading it.”

Now read all about Mil, the new project run by Pía León and Virgilio Martínez in Cusco, Peru.