As ambassadors for Farm Africa’s Chefs for Change initiative, trailblazing chefs Gaggan Anand of Gaggan and Andoni Luis Aduriz of Mugaritz travelled to Tanzania to follow the life cycle of rice and discover how this product impacts people’s lives – and learnt a trick or two from the local chefs

When world-renowned chef Gaggan Anand spoke at #50BestTalks, presented by Miele, in San Sebastian in 2018, the focus of his talk was rice. “Growing up in India, rice was probably the first thing I ate after my mother’s milk. It feeds two and a half billion people. It could be $20 a kilo or five kilos for a dollar. Rice would be in the poorest home in the world, but also in the richest man’s home.” It is the bridge that connects all nations in Asia, from Japan with sushi to Thailand with fish curry and rice, reflected the chef.

Less than 12 months later, Anand flew to Tanzania in East Africa, where he met with friend and fellow chef Andoni Luis Aduriz of restaurant Mugaritz in Errenteria, Spain. As ambassadors for Farm Africa’s Chefs for Change initiative, the chefs were in the country to understand more about the role of rice as they visited the Babati District, where the crop is a means of survival for hundreds of farmers.

“Imagine a life without rice. Rice is life, and this is where life begins. It’s incredible,” said Anand as he visited the paddy fields where Farm Africa – 50 Best’s charity partner – runs a ground-breaking project with local producers. Surrounded by pieces of string with scraps of material fluttering in the wind – a trick to scare birds away from key crops – the cooks were surprised to discover the stories behind one of the world’s most common foods. 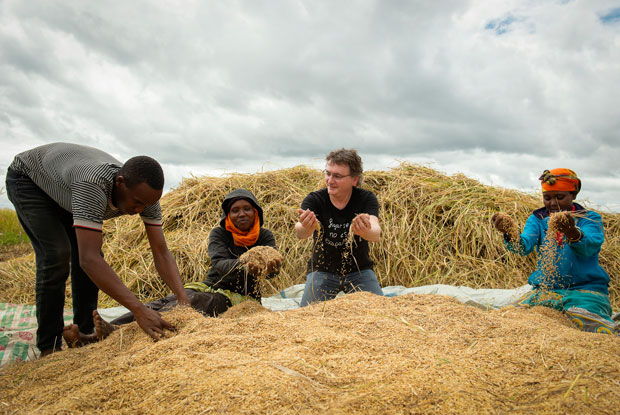 Aduriz in the paddy field with local farmers

“When you hold an ingredient in your hand, you get the people and the community behind it,” said Aduriz, who is widely considered one the world’s most forward-thinking chefs and whose restaurant Mugaritz is No.7 in The World’s 50 Best Restaurants 2019 list. “It’s food’s sixth sense, which is the story of the people who grew it.”

In Tanzania, rice can be a source of happiness and relief when a crop yields – or of despair when the harvest doesn’t return the vital income that the farmers need. As they listened to the human stories behind the cereal, Anand and Aduriz helped the local producers to thresh-cut paddy stalks onto a tarpaulin to release the grains, a process that improves drying and reduces the risk of fungal infection.

Gathering the grains up in enormous sacks, the cooks followed the rice’s journey to the warehouse, learning how simple measures introduced with Farm Africa’s support – such as using waterproof sacks and improving moisture control in the storage facilities – have helped farmers to gain more confidence in their crops and ensure they can gain the vital income they need.

As well as rice, another vital ingredient in local cuisine is sunflower oil, which is often milled from the flowers that grow in the fields surrounding Babati Town, the capital of the Babati District. Much like the grain, growing sunflowers is an essential means of sustenance for local smallholders, but in a country often plagued by drought, it can be difficult to guarantee a consistent income. 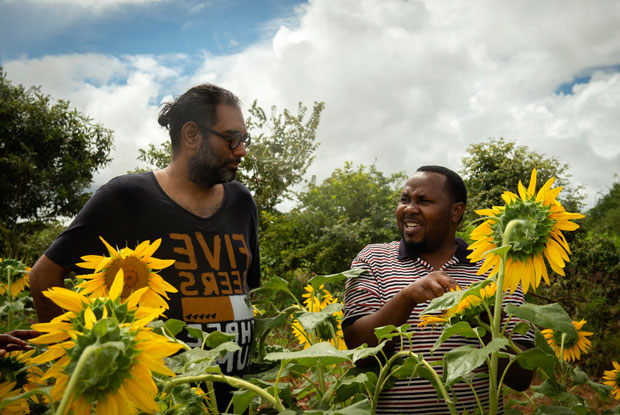 Chef Anand and farmer Stone in the sunflower field

Meeting with farmer Timothy Stone, Anand and Aduriz discovered that new hybrid seeds introduced with the help of Farm Africa are helping producers overcome the challenges of farming in the region. Stone and his wife have dedicated half of their farm to a new seed, which produces flowers with larger, drought-tolerant heads. In Tanzania’s difficult conditions, the sunflower performed so well that 100 local farmers have taken notice and want to buy the hybrid seed for the next harvest.

“Fats such as sunflower oil are a central product in the diet of the Tanzanian population. To make these people self-sufficient in the production of this raw material is to advance food security,” said Aduriz as the chefs visited the oil mill where sunflowers are transformed into the vital fat.

The oil mill and rice warehouse are only the beginning of the ingredients’ life cycles. In Babati Town, Anand and Aduriz entered the kitchen of Mama Zai – one of the most popular restaurants in the area – where they witnessed how the eponymous local culinary legend creates outstanding dishes in a kitchen with no tweezers, electricity or even chopping boards. 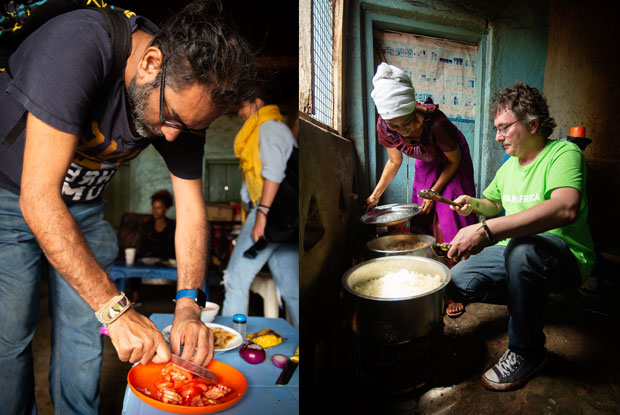 As they reached for plates to help with Mama Zai’s busy lunch shift, the chefs observed how the cooks chopped the greens while holding them in their hands. On the restaurant’s daily-changing menu was ugali (a traditional maize porridge), chicken stew, smoked fish in tomato sauce, green bananas in a creamy sauce, amaranth, white cabbage and two types of rice flavoured with spices.

“Mama Zai gave me the best meal on this trip. Her food was rustic, raw, cooked on charcoal in front of us. Her skills, presence of mind and passion blew me away,” said Anand, while Aduriz reflected that the chef’s dexterity would make anyone feel like an amateur.

As they left Tanzania having gone to the roots of the human story behind rice, the two award-winning cooks highlighted the need to invest in sustainable agriculture to ensure food security on a global level and empower local producers to adapt to climate change.

Watch the video with Anand and Aduriz and visit farmafrica.org/chefs-for-change to discover more about Farm Africa’s initiative and to find out how to get involved.

Now read what happened when the chefs behind SingleThread travelled to Peru to trace the production process of coffee and cacao, and stay tuned for the next Chefs for Change adventure, featuring Luke Dale-Roberts of The Test Kitchen.