Why Geranium in Copenhagen has the secret to award-winning hospitality

As Geranium wins the third Ferrari Trento Art of Hospitality Award, we look at how the Danish restaurant delivers an outstanding dining experience.

Geranium may be concealed atop the eighth floor of Copenhagen’s national soccer stadium, but cheap soda and fast food are guaranteed not on the menu. Instead, diners might find delicate edible leaves made from a purée of Jerusalem artichokes with rye vinegar or a tomato water broth studded with a rainbow of wild flowers.

The combination of chef Rasmus Kofoed’s artful approach to season-specific, detailed Danish cuisine with the seamless, comfortable and totally soignée dining experience led by co-founder and general manager Søren Ledet helped Geranium to earn a debut spot on The World’s 50 Best Restaurants list in 2009, within just a few years of its opening. And in 2016, the restaurant became the first in Denmark to win the coveted three Michelin stars.

Kofoed also serves as the only chef to have won the gold, silver and bronze medals at the esteemed global cooking competition, Bocuse d’Or, and his and Ledet’s objective of crafting the ideal guest experience within Geranium’s clean, light-flooded dining room has led the restaurant’s climb to No.19 on The World's 50 Best Restaurants list.

From warm, attentive service that’s never disruptive, to any number of Geranium’s 17 or so sea- and vegetable-hinged courses with accompanying wine pairings, Kofoed and award-winning sommelier Ledet’s ability to build a spectacular dining adventure for every patron explains why Geranium is a natural fit for the Ferrari Trento Art of Hospitality Award. Here are five of the restaurant’s incredible touches:

A meal at Geranium typically lasts three and a half hours. After concluding savouries, guests move over to a lounge area that was remodelled three years ago to create a more comfortable sitting space in which to end on three dessert courses, like ice cream made from beeswax and pollen; and a bite of beetroot with blackcurrant and yoghurt. This transition enables guests to continue to enjoy the experience without feeling rushed to finish sweets and any final digestifs, while the restaurant can prep for the next service. 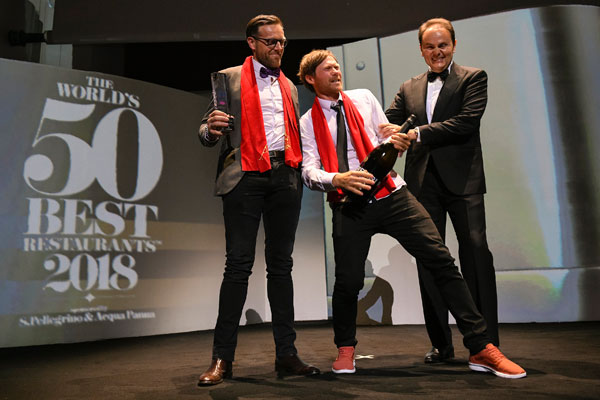 Kofoed’s hyper-detailed, innovative and sometimes playful approach to crafting a parade of delicious dishes rooted in nature, yet built with progressive technique, is designed not only to please the eye, but also to challenge the mind. While menus change as dictated by the seasons, one dish perpetually present is Kofoed’s marbled hake. This stunning presentation of hake pressed into a thin disk and swirled with ash from burned parsley stems camouflages into a plate designed with the same patterned aesthetic. 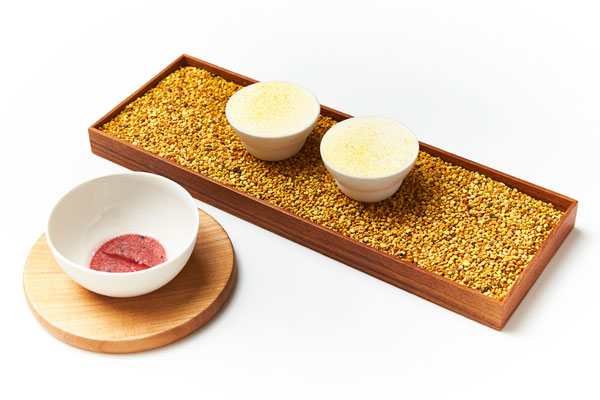 
3. Gluten-free is never an afterthought

The crisp, golden-hued nuggets of nutty warm bread that Kofoed serves as one of the three options during his bread course are gluten-free. Crowned with a mixture of cracked seeds, the addictive, small rolls could fool even the most devout wheat-eater into thinking they’re sampling the real thing. Elevating a product aimed at pleasing those with dietary restrictions represents just one of the many carefully considered details of the Geranium experience, and reinforces the restaurant’s dedication to diner satisfaction.

Geranium offers guests a prime view of the cooking action via a table for two perched beside the open kitchen – the best seats in the house. However, the good news is that thanks to the restaurant’s uncluttered layout and sun-drenched dining room, pretty much everyone can catch a glimpse of kitchen goings-on. 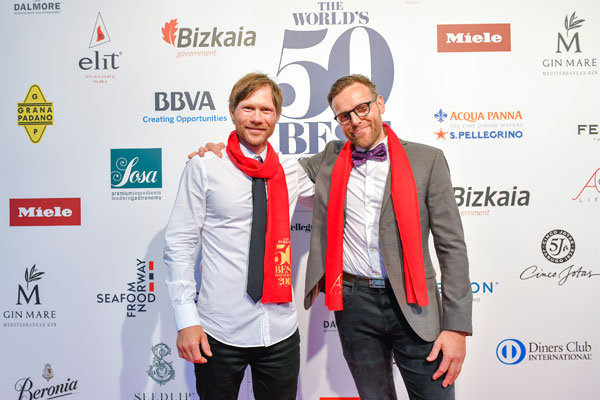 Rasmus Kofoed and Søren Ledet on the red carpet in Bilbao

Any guest who signs up for the beverage pairing is in for a thrilling ride, with sommelier Søren Ledet having won Wine Spectator’s prestigious Grand Award for the restaurant’s extraordinary wine programme. When Geranium first opened in 2007, Ledet took a risk by building his 350-bottle wine list entirely out of organic and biodynamic selections to complement Kofoed’s nature-inspired cookery. A decade ago, such a wine list was unheard of in Copenhagen, and many operators around the city took note, compiling their own natural-leaning lists. Today, Ledet’s roster has grown to offer a wider guest selection of 2,500 bottles, from independent producers who embrace less-manipulated juice to more classic expressions.

Ledet and Kofoed both have chef backgrounds and initially planned to divide their time between cooking and running the front-of-house. But Kofoed quickly found himself romanced by the kitchen while Ledet fell in love with hospitality and wine. From the series of accolades bestowed on the restaurant since its opening, culminating in the Ferrari Trento Art of Hospitality Award, it seems clear they both made the right decision.


The Ferrari Trento Art of Hospitality Award was introduced in 2016 in collaboration with the Italian winery to celebrate the outstanding work of front-of-house and service teams at restaurants around the world. The category was voted for by the same body of 1,040 worldwide voters that makes up The World’s 50 Best Restaurants Academy. The first winner of the award was Eleven Madison Park in New York, followed by El Celler de Can Roca in Girona, Spain, in 2017.

Catch all the highlights from The World’s 50 Best Restaurants awards ceremony, held in Bilbao: