Only two years after opening, Lima restaurant Mérito debuted on Latin America’s 50 Best Restaurants 2020 at No.37, winning the Highest New Entry Award, sponsored by Aspire Lifestyles. We take you inside Juan Luis Martínez and José Luis Saume’s increasingly popular spot to discover what their Peruvian-Venezuelan concept is all about

Juan Luis Martínez and José Luis Saume are the only Venezuelan chefs whose restaurant was voted in the list of Latin America’s 50 Best Restaurants 2020, sponsored by S.Pellegrino & Acqua Panna. Although they have currently made themselves at home in Lima, Peru, they have always made it a priority to honour their country’s diverse culinary heritage in their work.

“Latin America shares a beautiful endemic pantry,” says Martínez. “A product may be used one way in Venezuela and another way in Peru, but that’s where the link is. People always ask us: ‘You’re from Venezuela, do you do Venezuelan cuisine?’ ‘No.’ ‘Then, do you do Peruvian cuisine?’ ‘No, we don’t.’ We have recipes from each country, and we use products from both, but our cuisine is not necessarily one or the other.”

Although fusion cuisines are popular in Latin America and especially in Peru – you only have to look to Nikkei, which marries Japanese and Peruvian flavours, or chifa, that combines Chinese and Peruvian influences – Martínez and Saume were breaking new ground when they opened Mérito in 2018 with their search for an authentic blend of the two Latin American countries on opposite sides of the northern tip of their continent. 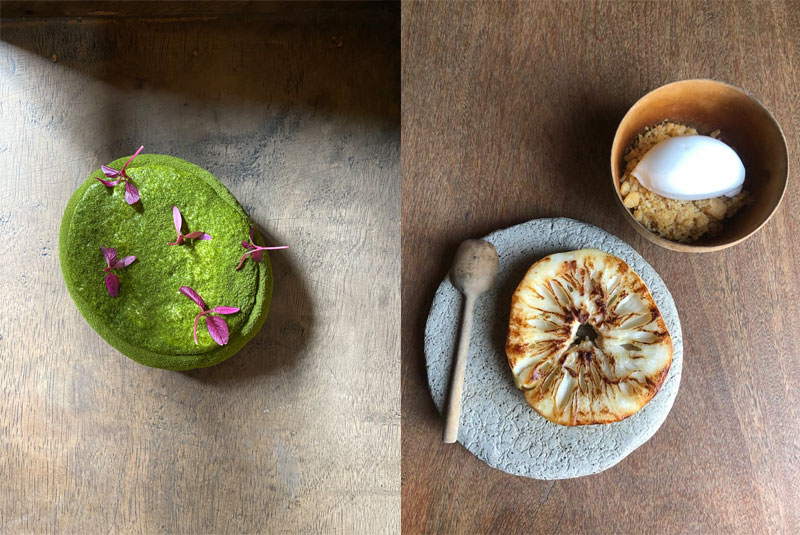 Both cooks felt strongly about their home country of Venezuela, where they grew up, studied and where their partnership started, but they were also in awe of Peru’s deep-rooted food culture and explosive flavours that made it a gastronomic power across the world. “To have found a way to embody Venezuelan cuisine in a country with a strong culinary culture such as Peru – that is our way to keep our homeland always with us,” says Martínez.

The idea to open Mérito came to Martínez after moving to Peru in 2014. He now looks after the creative and conceptual side of the restaurant, as well as being its spokesperson, while Saume oversees the kitchen and runs the day-to-day operations. The two cooks met while working at restaurant Planta Baja in Caracas, Venezuela, at the beginning of their careers.

Martínez subsequently went to France to continue his training, then moved to Spain, where he worked for a period at Madrid’s DiverXo with chef Dabiz Muñoz – an experience that became a watershed moment for him. “DiverXo was incredibly intense, it was crazy,” he recalls. “The restaurant was about to receive its third star and there was a lot of pressure. I saw something there that I didn’t know existed – a wonderful complexity of cooking. The things that came out of that small kitchen, which was chaotic, but in its own way perfect, were incredible.” 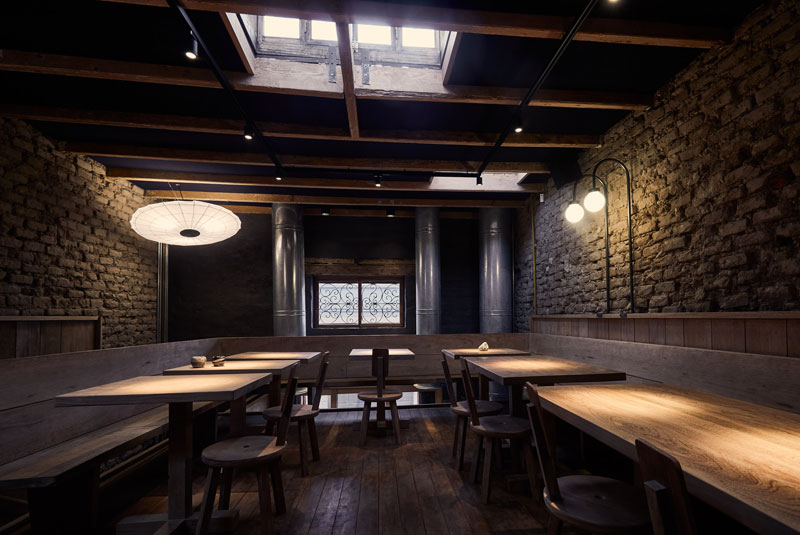 The next landmark moment for the chef took place at the gastronomic conference Madrid Fusión soon after. “I saw chef Virgilio Martínez give a talk and I was incredibly impressed,” he says. “I felt a little ignorant, to be honest, that I didn’t know that anyone was doing gastronomic work at that level on my side of the world, in Latin America. I felt uncomfortable in my way of seeing things, so I decided to go.”

Less than two weeks later, the young chef had already started working at Central, and within a couple of months, he was offered a full-time job and moved permanently to Lima. “I learnt so much about how Virgilio sees not only gastronomy and recipes, but also products, and how he takes these ingredients that nobody dares to use and gives them the value they should really have,” he says. “So the idea of Mérito arose from there, from all the things that I absorbed during those years of work in Europe and Latin America.”

To explain Mérito’s unique style, the chef describes one his favourite dishes: his and Saume’s version of the Venezuelan arepa, a cornmeal patty that is traditionally grilled at street food stalls, cut in half and filled with meat, stews or cheese. “Arepas are like our daily bread in Venezuela, the equivalent of tacos in Mexico,” says Martínez. “For Mérito, we came up with our own recipe, which is a thinner dough that puffs up in the oven. But what could we serve it with? 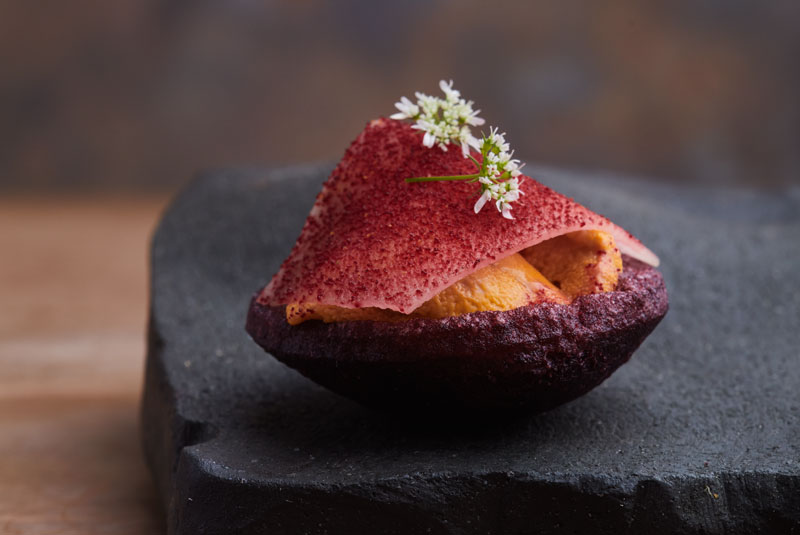 “We thought about butter, because there’s nothing better than a warm arepa with butter. We took a heritage Peruvian product called chicha de jora [a beverage similar to beer that results from the germination and fermentation of malted corn] and made a reduction, creating a concentrate. Then, we mixed the butter with the chicha de jora reduction and served it with the Venezuela arepa. So there is a modern aspect, but it still carries a lot of culture, it doesn’t stray too far away from tradition. Here, you can see Peru and Venezuela together in a dish.”

With the inclusion of Mérito in Latin America’s 50 Best Restaurants 2020, and with the restaurant being recognised with the Highest New Entry Award, sponsored by Aspire Lifestyles, Martínez and Saume are now working on expanding and developing their concept. Having recently acquired the space next to Mérito – which is located in Lima’s artistic district of Barranco – they are planning to expand their bar, lounge space and cocktail programme, as well as creating a new space for their production kitchen.

Martínez also has a plan in the works to start a bakery. “I love bread,” he says emphatically. “Here in Lima, I always go to a bakery called El Pan de la Chola. If I’m in London, I visit Flor [chef James Lowe’s casual restaurant and bakery], where a friend of mine makes the bread. In Copenhagen, I’m always eating croissants. If I had to change careers, I would be a croissant baker.” 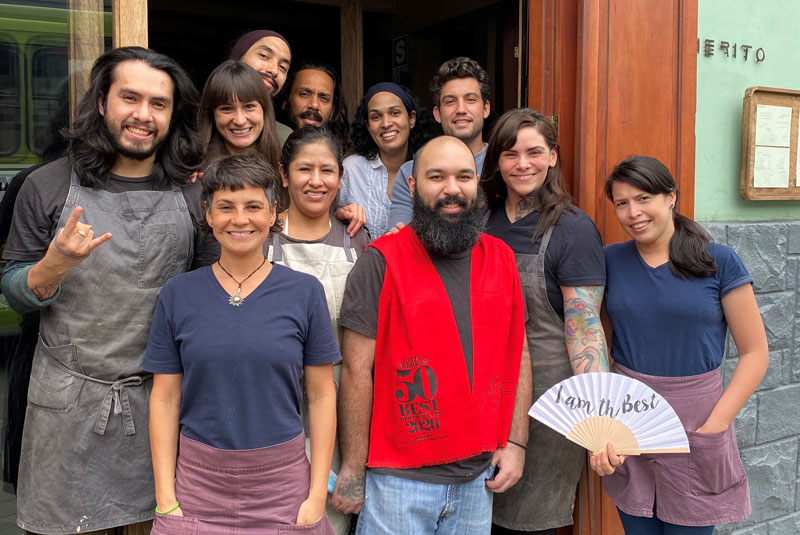 The new kitchen would therefore also accommodate a space for a bakery, to create a casual place for people to enjoy breads, sandwiches, pastries and salads – a concept that would also work well for takeaway and delivery, highlights Martínez. At Mérito, the kitchen team makes a sourdough flat bread with pancetta that the chef would love to expand and serve with more toppings.

Through all these exciting developments, he’s keeping Venezuela close to his heart. “Venezuelan gastronomy is very diverse. It has indigenous, African and European roots, and a large pantry of products from the coast to the Andes and the Amazon,” he says. “It’s impossible to talk about Venezuela without mentioning our political situation, but it is a country that is rich in every way.

“Unfortunately, there is much that we haven’t yet been able to take advantage of because of the political situation – but that won’t last forever. Now that many of us Venezuelans are everywhere around the world, we are learning so much about ourselves and about what we are worth. We are going through a period of learning that will leave us with a lot of wisdom afterwards. And for me, that is one of the most valuable things we could have.”

Catch up on all the highlights from Latin America's 50 Best Restaurants 2020: