Kjolle’s Pía León on family life, leading from the front and working with husband Virgilio Martínez

Just 15 months after opening, Pía León’s restaurant Kjolle in Lima, Peru, debuted on the Latin America’s 50 Best Restaurants 2019 list at No.21, claiming the Highest New Entry Award. We catch up with the chef to talk about the restaurant’s inaugural year, her views on kitchen management and how her son is the most-loved kid in the Latin American chef community

Pía León knows the importance of patience. Although she ran the kitchen at Central – the three-time No.1 in Latin America’s 50 Best Restaurants' list, sponsored by S.Pellegrino & Acqua Panna – for 10 years, she bided her time for the perfect moment to open her own restaurant, Kjolle.

That moment came in July 2018, when León and her husband Virgilio Martínez decided to move Central from its original location in Miraflores to a new home in the trendy neighbourhood of Barranco in Lima. Over eight intense days, the team didn’t only move Central across the city, but also set the foundation for a new cocktail bar, Mayo, in the same building, as well as León’s debut restaurant. A month later, Kjolle opened its doors for the first time.

“The time had come when I needed to build something new,” says León. “I needed to start from scratch and do it myself. Everyone was asking me why I didn’t open my own restaurant, but I hadn't really felt ready until then. I wanted to absorb as much as I could from Virgilio and the team, until the time came and I said ‘I'm off’.” 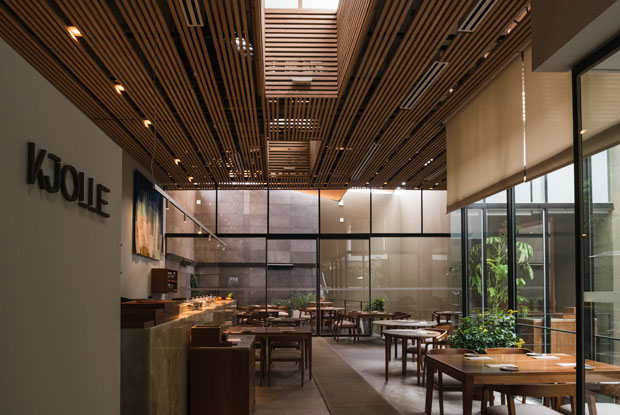 At Kjolle, León feels free to express her own culinary personality. Moving away from Central’s world-famous ‘ecosystem menus’, which take the ingredients from a certain area of Peru and transform them into dishes that portray the ecosystem on a plate, she chose a more instinctual approach that puts the focus fully on the product.

“At Kjolle, we only look at the ingredient without thinking about the ecosystem. A dish may have something from the coast combined with something from the Amazon – you could say it’s a little freer. Kjolle is Peru, products, colours. It’s more concrete, not as researched as Central,” she says.

As the two restaurants are located in the same building, they thrive off the differences between their concepts. However, both reflect to the couple’s shared vision to showcase Peru’s lesser-known produce in culinary form, using ingredients that are researched and discovered by Mater Iniciativa, the association led by Martínez’s sister Malena. 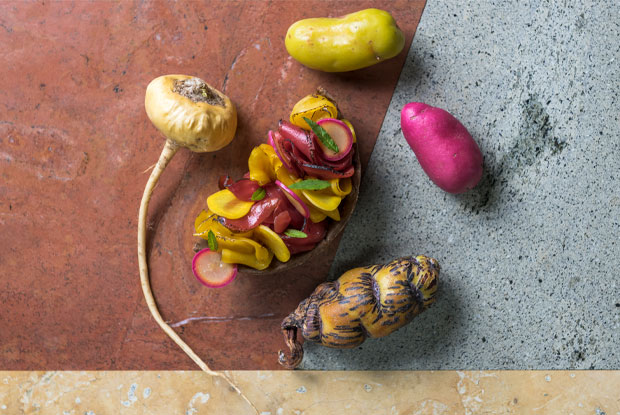 Although León and Martínez each run their own restaurant now, she says that keeping their collaborative approach to creative development has been crucial. “Virgilio and I have been working together for 10 years. At the beginning, it was a bit more complicated, because we had to get to know each other, but now I respect his space and he respects mine. We don’t bother each other, but we also work a lot as a team, otherwise, it doesn't work.

“Each one respects the other’s ideas and listens to what the other has to say, and this way we get results. I really love working with Virgilio. What's more, I appreciate him because we share the time to look after our son, otherwise it would be very complicated. I'm happy.”

The couple and their son, four-year-old Cristóbal, live in the same building where Kjolle and Central are found, a move which allows them to spend the most time together as a family. They can take their son to school together, for instance, or share a drink after service. “We're happy in the ecosystem we're in,” she says. “We don't need anything else.” The chef laughs that Cristóbal already knows where the chocolate is kept in Kjolle’s kitchen and that he’s the ‘most-loved kid in the Latin American chef community’. 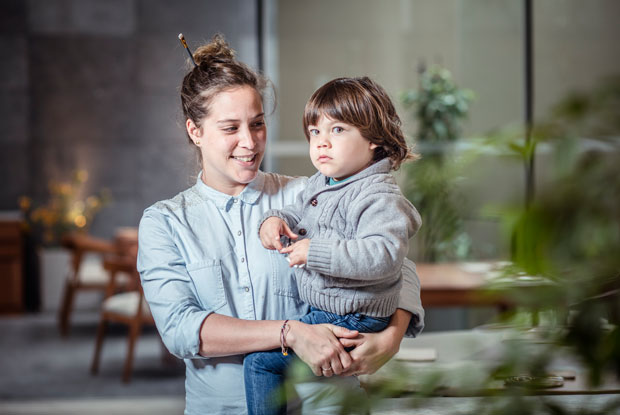 León and her son Cristóbal in 2018

Choosing to step into the spotlight after 10 years in the kitchen at Central didn’t come without challenges, but León took them in her stride. In 2018, she was named Latin America’s Best Female Chef, and Kjolle’s debut on the Latin America’s 50 Best Restaurants 2019 list at No.21, accompanied by the Highest New Entry Award, has given her even more confidence.

“At the beginning there were a lot of nerves, a lot of fear, because you don’t know what’s going to happen or if people are going to like the restaurant,” she says. “With time, you become more confident. Now we are happy, but you have to be at the restaurant every day, you have to move forward, and you also have to motivate a team, which is super important. Without the team, you can't do anything.”

Just as she does with Martínez, León takes a collaborative approach in her own kitchen too. The full team takes part in the development of Kjolle’s new dishes, contributing ideas, different approaches and variations until the recipe is deemed complete. León also likes to organise weekly outings for the team and small competitions – such as an ice cream making challenge – to foster team spirit. 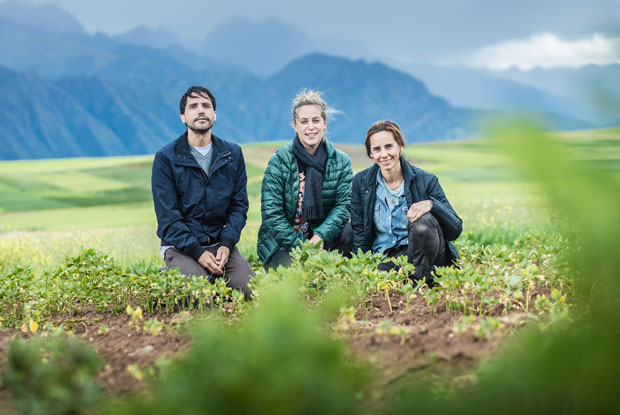 Virgilio Martínez, Pía León and Malena Martínez in the Andes

Opening her own restaurant, León also had to step into a new role as Kjolle’s leader – a change she took very seriously. “To become a leader, you have to be very consistent, have clear objectives, persevere and always remember that you are an example to the team and all your actions are seen,” she says. “You have to give your 100% every day and you have to stay curious to avoid falling into conformity.”

The chef reflects that when she entered Usina del Arte’s theatre in Buenos Aires for the Latin America’s 50 Best Restaurants 2019 awards ceremony, she didn’t imagine that she would soon be on stage to receive the Highest New Entry Award for Kjolle. “It was a surprise,” she says. “We knew we had done a good job during our first year; an honest job with a lot of passion and dedication. So we’re very happy with the result – it gives us even more strength and fuels our desire to continue doing our own thing, our own way.

“To my team, thank you for trusting this new project and for trusting me, not only as a cook but also as a friend. The restaurant is made by the team, so with a great team – a great family – you can do very rewarding things. We have a lot of work ahead of us to continue learning, watching and listening. We are a new restaurant, so everything depends on our daily work, our will and what we want to communicate. We continue with the same passion and motivation we started with on the first day.”

Get to know León as she takes a trip to the Amazon in our video: