As winners of The Macallan Icon Award for Latin America’s 50 Best Restaurants 2021: Pasado y Futuro, Rodrigo Oliveira and Adriana Salay have worked hard to nourish the community around their restaurant in São Paulo throughout the global pandemic. 50 Best speaks to the couple about regional Brazilian gastronomy, restaurant inclusivity and their efforts to feed the hungry.

Tune in to watch the awards ceremony for Latin America’s 50 Best Restaurants 2021: Pasado y Futuro on Monday, 22nd November from 23:00 UK time on Facebook and YouTube

While life may have returned to almost-normal in many parts of the world, in others the pandemic has exacerbated existing problems of poverty and hunger, leaving millions of families worse off than ever. In Brazil, where more than half the population now suffers from some level of food insecurity, one couple has taken to nourishing its community to alleviate the effects of the worst crisis in recent history.

In the working-class neighbourhood of Vila Medeiros on the outskirts of São Paulo city, Mocotó chef-owner Rodrigo Oliveira and historian, teacher and activist Adriana Salay, who handles the restaurant’s communications, have been quietly feeding their community for the last 20 months. Through their project Quebrada Alimentada, funded in large part by the restaurant, they have been providing nutritious daily lunchboxes and monthly food baskets to those in need since Covid-19 hit. 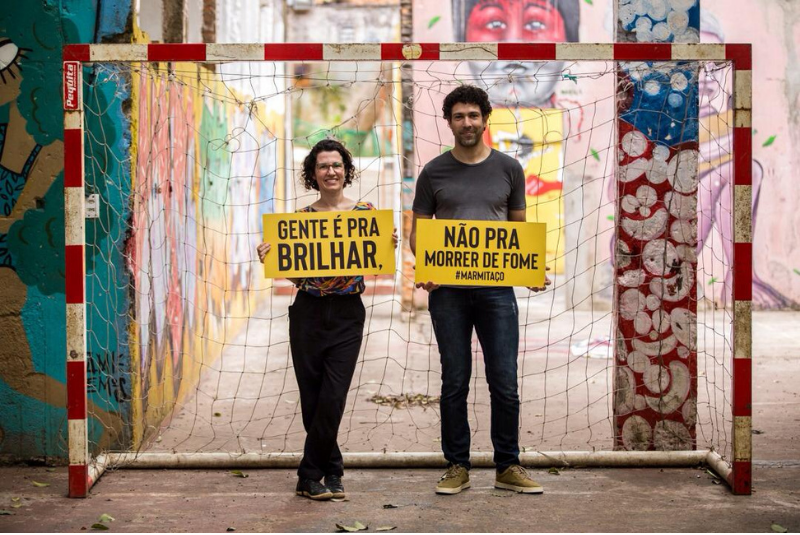 Adriana Salay and Rodrigo Oliveira holding signs that say: 'People are made to shine, not to die of hunger'

“Brazil’s hunger problem is so big and deep-rooted it’s disheartening,” says Oliveira. “When you look at the enormity of the issue, you don’t think you can make the slightest difference, but if you serve 10 hot meals, you make a difference to 10 people, and you inspire others too. We’re under no illusion that we’ll fix the problem at its root, but we can give people hope and help them sleep better at night.”

This urge to serve the community is something that has always been at the heart of Mocotó, the restaurant founded in 1973 by Oliveira’s father, José de Almeida, known affectionately as Seu Zé. He moved to São Paulo from the Sertão, an impoverished backlands region in the northeast of Brazil made famous in literature. Almost 50 years later, Mocotó still serves the namesake cow’s foot soup that Seu Zé started making in those early days, alongside other sertaneja foods like baião de dois, a humble dish of rice and beans with halloumi-like coalho cheese.

While it has featured in every edition of Latin America’s 50 Best Restaurants and is often referred to as São Paulo’s most iconic restaurant, Mocotó has always remained true to its principle of inclusivity. With a great value à la carte and no tasting menu, it is accessible by the local community as well as international diners.

“Mocotó isn’t like any other restaurant on the list,” says Oliveira, who took over the kitchen from his father in 2001. “We might be on the list because of our language. We’ve helped people understand sertaneja cuisine, which was always stigmatised and associated with poverty, as well as being thought of as ugly, heavy, indigestible. We’ve made people see it can also be a gastronomic experience with value. It’s about a format of excellence that’s not linked to exclusivity, but excellence of product and technique. It’s important that restaurants like Mocotó gain this type of recognition because it shows that people have understood our message: that value comes above cost.”

One of Mocotó's popular dishes: carne de sol with chilli pepper and garlic

Making the world a better place
While Oliveira was born and raised in Vila Medeiros in the north of São Paulo, close to the international airport, Salay grew up with a similarly humble background in Santo André, south of the city. They met when Salay was studying the nation’s eating habits and enrolled on a course at Mocotó. “Even though we have different personalities, we have very similar visions of the world,” she says. “We both want greater equality.”

The couple, who now have two children together, conducted a study on Vila Medeiros and found that the neighbourhood’s average wage was much lower than that of the rest of São Paulo. It also lacks parks, theatres, squares, leisure areas and other public spaces. They decided their role through Mocotó was to help transform the neighbourhood and bring dignity to its people, and in early 2020 they had just opened an events space for the community beside the restaurant when the pandemic forced everything to close. While the space has served as extra seating during social distancing measures, it will soon reopen as a venue for music, art, education and gastronomy. They are also working on plans to help educate the locals and give them the tools with which to find gainful employment at a time when many members of the community are struggling to put food on the table.

“Before the pandemic, Brazil’s poverty figures were already on the rise,” says Salay, who has studied the topic in-depth as part of her PhD programme. “In 2014, the figures were improving and we were taken off the UN Hunger Map for the first time in Brazil’s history. But in 2015 we entered a recession, with an increase in unemployment, reduced purchasing power and a consequent increase in hunger. The pandemic has acted as a catalyst for social problems that were already escalating.”

The couple are well aware they can’t solve Brazil’s issues alone. Salay is vocal about the actions she believes must be made by the government, starting with an increase in the minimum wage in the short term, and job generation policies and price controls on food in the medium term. In the longer term, she wants to see agrarian reform, tax reforms and the prioritising of education.

“Adriana is a teacher, an activist, a mother, a dancer,” says Oliveira. “She has a lot going on, but whatever she does, she puts the same effort into it and makes the world a better place. That really inspires me.” 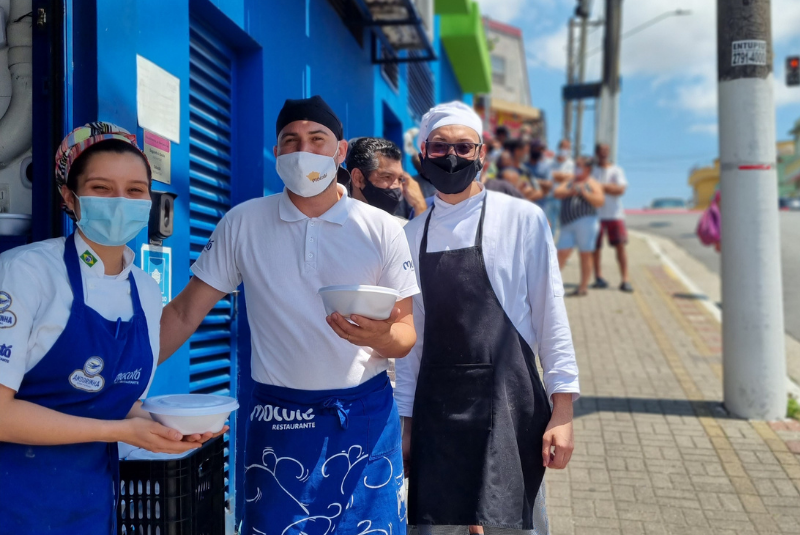 The Mocotó team working as part of Quebrada Alimentada, the project that has provided lunches to those in need since the outbreak of the pandemic

Taking Brazilian cuisine global
While Salay fights for a better world through her campaigning, Oliveira is busy spreading his message of inclusive gastronomy beyond Brazil. In September, he took his smash-hit signature tapioca dice to Los Angeles with his newest restaurant Caboco, meaning indigenous in Portuguese. Despite challenging times for restaurants globally, he says bookings are constantly full and the reception has been overwhelmingly positive.

Back in São Paulo, Oliveira runs the flagship Mocotó as well as two more casual Mocotó Cafés, a food truck and a restaurant called Balaio inside the Instituto Moreira Salles cultural centre. Now keen to get closer to the products they serve, Oliveira and Salay have bought a large plot of land in São José dos Campos, São Paulo state, where they will open a laboratory and grow everything from coffee to corn, fruit and veg and cassava. The couple say it will also serve as a refuge from the hustle and bustle of city life, where they have been ploughing all efforts into the opening in Los Angeles, reopening Mocotó and continuing to feed those most in need.

Restoring the community
While the couple are well-respected for using their small and mighty platform to help alleviate hunger in their tiny corner of Brazil’s biggest city, they emphasise that Quebrada Alimentada is a collective effort.

“Our business is not just about food and drink; it’s about relationships,” says Oliveira. “For a project like Quebrada Alimentada to happen, relationships are key; they make it possible to set up a network in a peripheral neighbourhood like ours. Sure, there was a huge investment on our part, but we wouldn’t have been able to do a fraction of what we did without the help of many hands and many hearts.”

But there’s little doubt the project’s success is down to the combination of gastronomic wizardry and humanitarian spirit that make this iconic couple so beloved by both international foodies and their own community. And it’s certain they’ll continue to do whatever they can to support the people around them.

“Adriana has a phrase that I love: ‘A restaurant serves to make sure people leave better off than when they arrived’,” says Oliveira. “If a restaurant can restore a person, it can also restore a community.”

Watch the video with Rodrigo Oliveira and Adriana Salay:

In 2021, due to restaurant closures caused by the pandemic, no vote was held for Latin America’s 50 Best Restaurants. Instead, Latin America’s 50 Best Restaurants is holding a special ‘Pasado y Futuro’ edition, sponsored by S.Pellegrino & Acqua Panna, recognising the top 100 restaurants of the last nine years and awarding a series of individual and special prizes that celebrate emerging talent.

As part of this edition, Oliveira and Salay were voted as winners of The Macallan Icon Award from a shortlist of four candidates. The award celebrates an individual whose work is effecting long-lasting change in the industry.