Ahead of the reveal of the special edition of Latin America’s 50 Best Restaurants 2021: Pasado y Futuro, sponsored by S.Pellegrino & Acqua Panna – which will take place on Monday, 22nd of November – today we announce the shortlists for four special awards in the programme. Meet the finalists here.

Tune in to watch the awards ceremony on Monday, 22nd November from 23:00 UK time on Facebook and YouTube

In 2021, Latin America’s 50 Best Restaurants is reinventing itself with a special, one-year-only retrospective edition that will include the 100 best places to eat in the region of the last nine years. But on top of that, as part of this year’s unique format it is also announcing shortlists for a range of special awards for the first time, in order to shine a spotlight on the region’s diverse culinary talent after a period of marked challenges for the industry. Some of its usual accolades are changing to recognise the restaurants and chefs who are working to create a better future for Latin America’s hospitality sector – thus celebrating both the Pasado y Futuro of the scene.

Discover the special awards that will be announced this year and meet the finalists in each category:

Fadul’s culinary mission is clear: to raise the bar of the Guatemalan cooking scene. Using only local and seasonal produce in creative ways at her restaurant, Diacá, she aims to provoke conversation through her cooking and a profound connection with the earth. In 2020, Fadul founded three not-for-profit projects to educate diners on the origins of sustainable Guatemalan produce.

Francesca Ferreyros – Baan, Lima, Peru
Beginning her culinary career at a young age, Ferreyros travelled the world and worked in prestigious kitchens such as El Celler de Can Roca in Spain and Gaggan in Thailand. Armed with knowledge and passion for Thai cuisine, she returned to Peru to open her Pan-Asian restaurant Baan and establish the UNE project, combining the flavours and heritage of the Amazon rainforest and the Asian jungle. 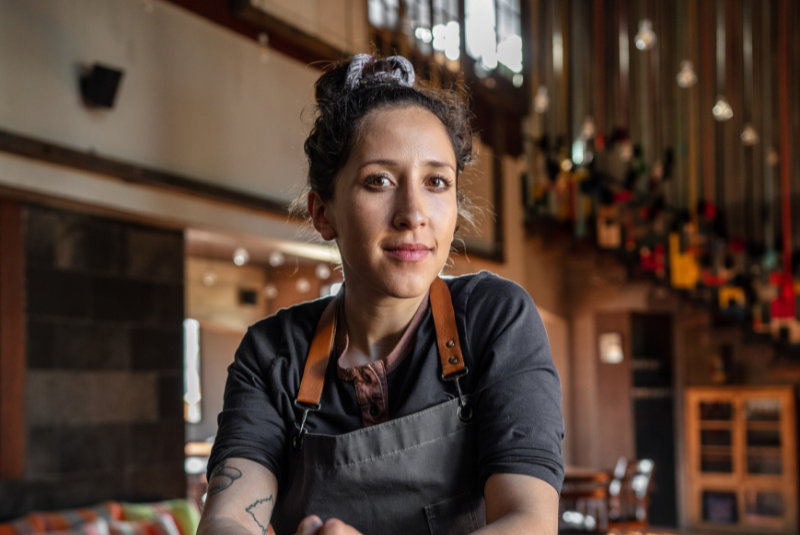 Since joining Gustu in 2013, Taha has risen quickly through the ranks to become one of the few Bolivian women working as head chef at a top restaurant. While her menu showcases Bolivia’s extensive endemic pantry, Taha is also a founder of Sabores Silvestres, a group of researchers, scientists and biologists aiming to preserve Bolivia’s produce and culinary heritage.

Pía Salazar – Nuema, Quito, Ecuador
Pastry chef Salazar serves up a storm of desserts at Nuema. Established in 2014, the restaurant – whose ethos is to showcase Ecuador’s broad biodiversity – first entered the rankings of Latin America’s 50 Best Restaurants in 2020. Salazar’s contemporary and avant-garde creations include locally grown ingredients such as sacha inchi – a green star-like fruit – and the Amazonian u’kuisi used as natural food colouring. 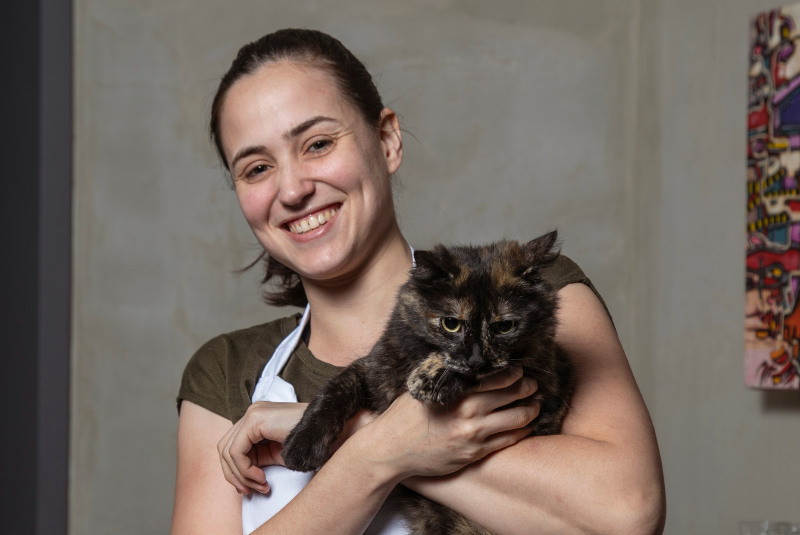 Pfannl is pushing the boundaries of creative New Paraguayan cuisine from her kitchen at Pakuri, the restaurant she runs with her partner and restaurant sommelier, José Miguel Burga. Pfannl’s dishes unite nature and indigenous culture, for instance by cooking unusual ingredients in a tatakua oven, such as grilled surubi with turmeric butter and panache vegetables.

Read the article about the winner of The Rising Star Female Chef Award, Marsia Taha 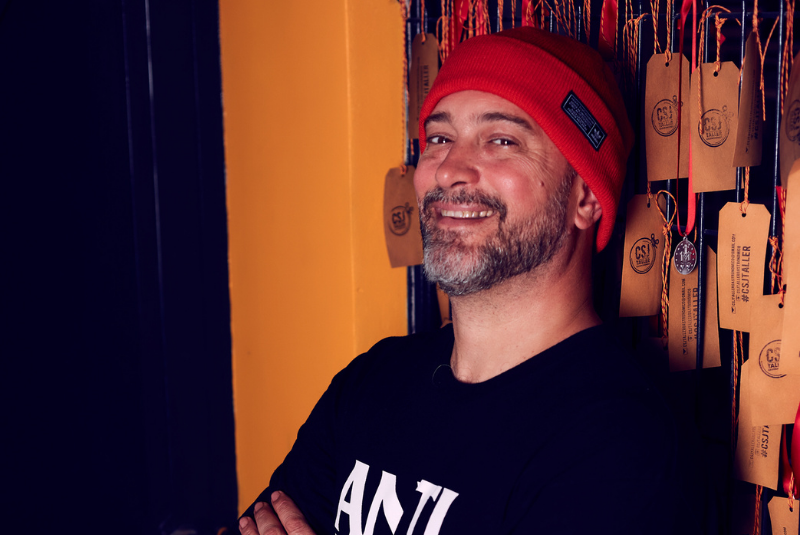 Café San Juan has been a favourite of Buenos Aires residents for 20 years, but during the pandemic it transformed into a pillar of the local community. Under Cristóbal’s lead, the restaurant developed a ‘neighbourhood menu’ delivering comfort foods to customers for just 250 pesos ($3) per meal, and provided hot meals to frontline medical staff throughout the lockdowns.

Norma Listman and Saqib Keval – Masala y Maíz, Mexico City, Mexico
Listman and Keval opened Masala y Maíz to explore the migration of ingredients, culinary techniques and cultural foodways from India to East Africa and Mexico, with environmental and social justice at the heart of their work. In 2020, they created a cooperative grocery store that supported artisanal suppliers, restaurants and employees through the hard times caused by the pandemic. 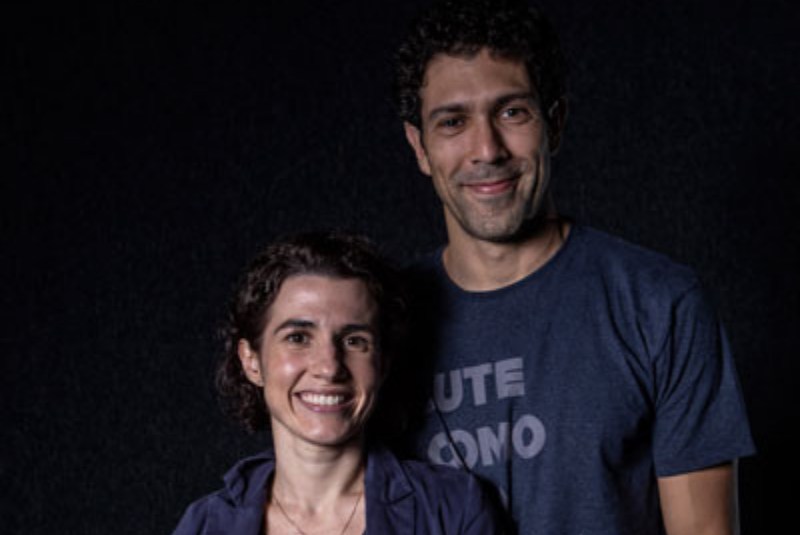 Chef Rodrigo Oliveira of restaurant Mocotó (a São Paulo favourite that ranked No.33 in Latin America’s 50 Best Restaurants 2020) and his wife Adriana Salay, a historian and food campaigner, together founded the non-profit Quebrada Alimentada in 2020. The self-funded initiative served over 80,000 meals to the hungry, making a difference in the lives of many Paulistanos.

Read the article about the winners of The Macallan Icon Award, Rodrigo Oliveira and Adriana Salay


Estrella Damm Chefs’ Choice Award – Best Reinvention
This year, the award will honour a chef who has successfully reinvented themselves or their restaurant during the pandemic, creating a fresh blueprint for the future 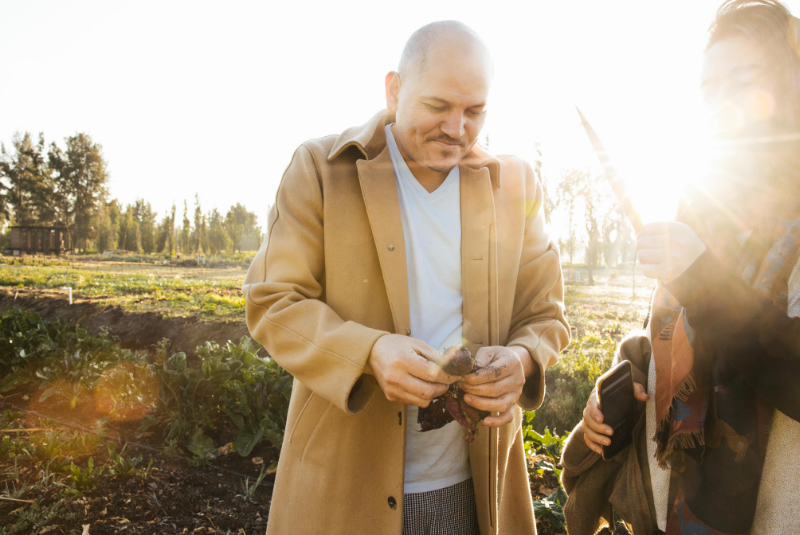 At his restaurant Máximo Bistrot – No.36 in Latin America’s 50 Best Restaurants 2020 and a favourite in Mexico City since it opened in 2014 – García showcases the best fresh, Fair Trade and sustainable produce from Mexico City. Over the last 18 months, he helped organise programmes to feed the vulnerable and to support producers, while also working on relocating Máximo Bistrot to a new location, inaugurated in July 2020.

Benjamín Nast – De Patio, Santiago, Chile
Despite all the pandemic-induced difficulties, young entrepreneur Nast – who helms De Patio, an innovative venue that took the No.31 place on Latin America’s 50 Best Restaurants 2020 – didn’t stop for a second during the pandemic. Changing his model business to ensure he could support his employees, launching the delivery concept Ramen and Burgers in 2020, and opening the casual Demencia Restobar in 2021 are among his recent achievements. 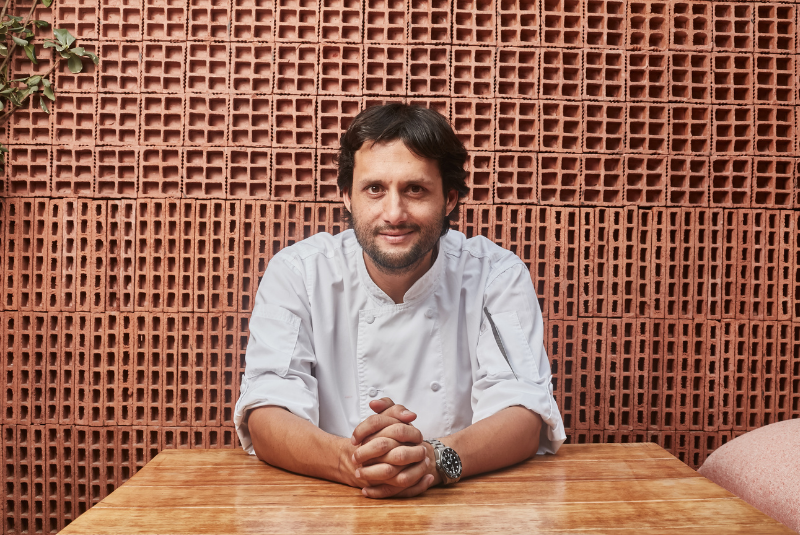 With his flagship Mayta voted in the last two editions of Latin America’s 50 Best Restaurants, Pesaque is a dynamic chef used to wearing many hats. His pandemic delivery concept Mad Burgers was a success, and new restaurant Sapiens is set to follow suit. Pesaque also doubled down on research during the pandemic, working on recovering the biodiversity of the Ica ‘fertile desert’ region of Peru with his Yachay project.

Jennifer Rodríguez – Mestizo Cocina de Origen, Mesitas del Colegio, Colombia
Rodríguez took over from her father, Alonso, to run Mestizo Cocina de Origen, a family restaurant that preserves rural culinary traditions and sits at the very heart of its community. It features its own bakery, Pancoger, that uses Colombian ingredients and fermentation techniques. Through Pancoger, Rodríguez launched a ‘Share bread with your neighbour’ initiative to help the most vulnerable. 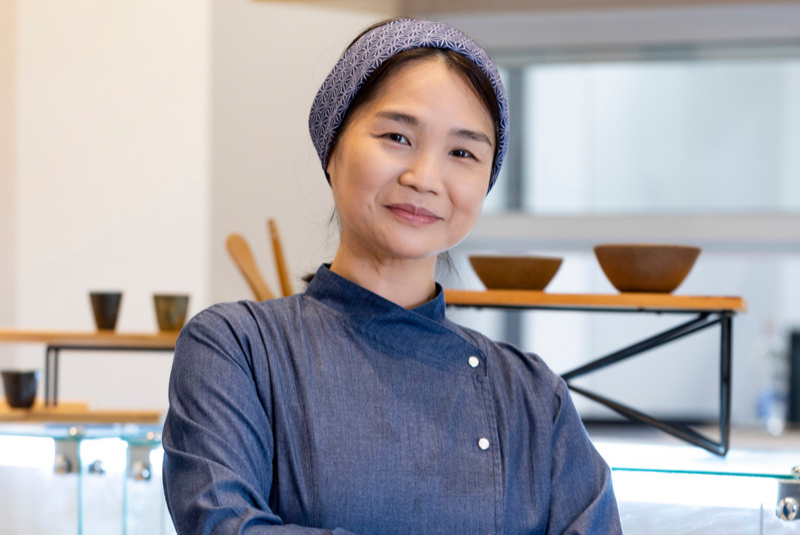 Shiraishi helms one of São Paulo’s best-loved Japanese restaurants, Aizomê, on top of being honoured by her home country as an ambassador for the dissemination of Japanese culture and cuisine in Brazil. During the pandemic, she created and raised funds for the Água no Feijão movement, which distributed around 100,000 packed lunches to the Heliopolis community of São Paulo in 2020. 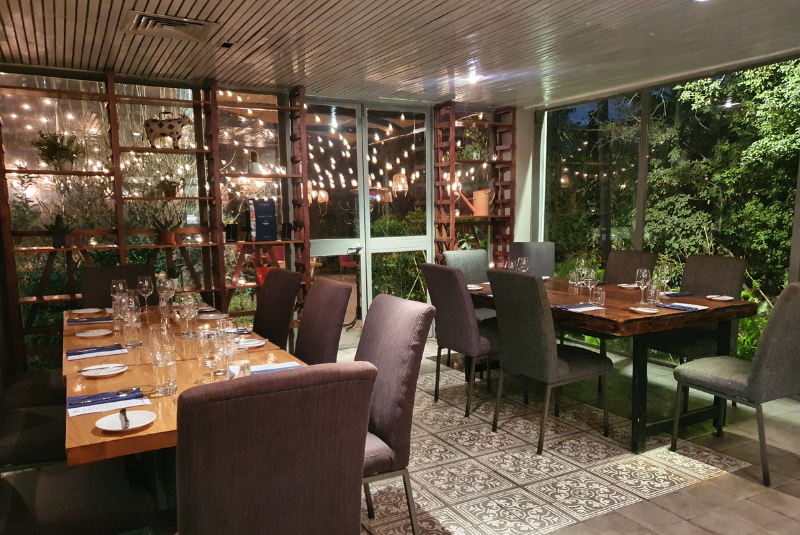 This family-run restaurant is a gastronomic melting pot of Chilean, French and broader Latin influences. The friendly atmosphere and excellent hospitality across the several dining rooms and comfortable outdoor seating area are led by chef Carolina Bazán and co-owner Rosario Onetto. The restaurant has recently reinvented itself with an in-house shop, selling deli items from local farmers as well as house plants.

Celele, Cartagena, Colombia
Dynamic duo Jaime Rodríguez and Sebastián Pinzón have always put the diners’ experience first in their vibrant restaurant, Celele. Combining Caribbean produce with Colombian techniques, the dishes highlight flavours and ingredients that might otherwise have been forgotten. Determined to provide during the pandemic, Celele shipped delivery boxes all over Colombia, showcasing unique products from their artisanal suppliers.

At Maito, chef Mario Castrellón has created a menu of colourful and exciting dishes forged from sustainable products from indigenous communities, leading to it being hailed as Panama’s foremost fine-dining establishment. During the pandemic, Castrellón turned the restaurant into a production facility and delivered meals from his casual concept La Despensa de Maito, opened Asian concept Lao Ban and even launched a new food truck.

Mishiguene, Buenos Aires, Argentina
Personal history plays its part in Tomás Kalika’s restaurant. Honouring his Jewish heritage and his grandmother’s homeland of Israel, many of his creations are contemporary versions of traditional dishes, including a Russian-Polish borscht and spit-roasted Moroccan lamb. During the pandemic, Mishiguene upped the tempo further, providing a delivery service and an outdoor terrace for its guests, and opening the new Café Mishiguene in September 2021. 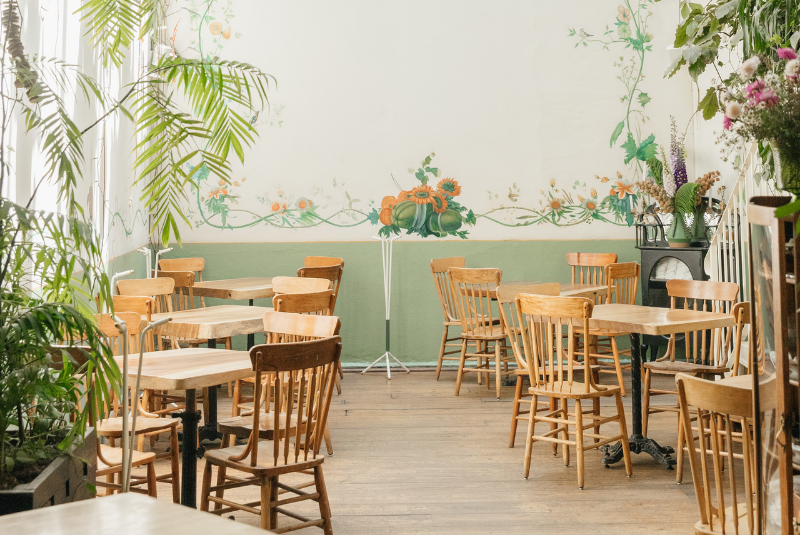 Chef Elena Reygadas had to adapt the concept of her restaurant, Rosetta, during the coronavirus outbreak. When the eclectic mansion in Mexico City could no longer welcome its diners inside, Reygadas began a new grocery list. It led Rosetta’s offering – which might include wagyu beef tartare and Jerusalem artichoke with lentil and beetroot hummus – to become portable for delivery and take-away, but certainly no less delicious.