As an ambassador for Chefs for Change, the chef-owner of Cape Town’s The Test Kitchen took the journey north to Lake Victoria to witness the sustainable fishing methods cultivating a healthier future

In the world of quality restaurants, we often talk piously about the importance of indigenous ingredients, reducing food miles and the benefits of a locavore approach. But what if eating local was damaging the ecosystem?

Lake Victoria – the water mass bordered by Kenya, Tanzania and Uganda in east Africa that has provided the lifeblood to its surrounding communities for centuries – is running out of fish. Overfishing, illegal fishing, a change in the PH levels to the water through pollution and a declining water table have all contributed to the sharp reduction in the fish population. Since its peak in 2004, the number of perch in the lake has halved, with 76% of the 204 fresh-water species unique to the lake at risk of extinction, according to the International Union of the Conservation of Nature.

As the grab for the remaining fish has increased on all shores of the lake, it has seen desperate fishermen design nets that catch fish of below the legal size to sell at market, export or cook at home. Policing the issue is difficult, thanks in part to the sheer size of the lake – the second-largest freshwater lake in the world – and the vast numbers who work its shores every day in attempt to make a living. For any sort of fish volume to be maintained in the water, action had to be taken.

Angling for a better future

Luke Dale-Roberts cooks fish every day. The way he approaches produce at The Test Kitchen, his Cape Town restaurant ranked No.44 in The World’s 50 Best Restaurants 2019, sees him look to the entire world for inspiration and technique. Many of his ingredients, however, come from closer to home.

Although his restaurant is some 3,000 miles from Lake Victoria, Dale-Roberts is well aware of its plight. “Cooking and being a chef and living in South Africa, I understand the importance of sustainability in all of Africa, as well as across the globe,” he says. As an ambassador for Chefs for Change – an initiative involving 50 Best Chefs created by charity partner Farm Africa – Dale-Roberts was given the opportunity to visit Kenya’s Kisumu District and explore the area surrounding Lake Victoria to examine what is being done to combat the lake’s dwindling resources. 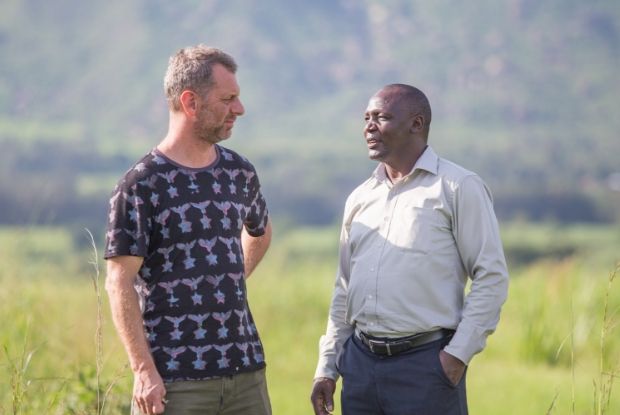 Sustainable fish farms are one highly effective tool, putting the future of the lake in local hands. Dale-Roberts met the farmers working with Farm Africa who are being educated in the systems of breeding, hatching, maintaining and exporting freshwater fish from manmade pools in the region. “It’s a great privilege for me to be involved in Chefs for Change, seeing the way food can be grown and farmed in a sustainable way. Today, I’ve been looking at tilapia and catfish farms. They cooked me some tilapia – it had a beautiful, flaky texture,” he says.

Taking to the water in his waders, Dale-Roberts experienced first-hand the process involved in sizing the fish. He assisted in training the locals in how to assess quality specimens, while Chefs for Change representatives educated farmers on how to access high-value markets, showing the benefits of farmed fish over wild-caught. 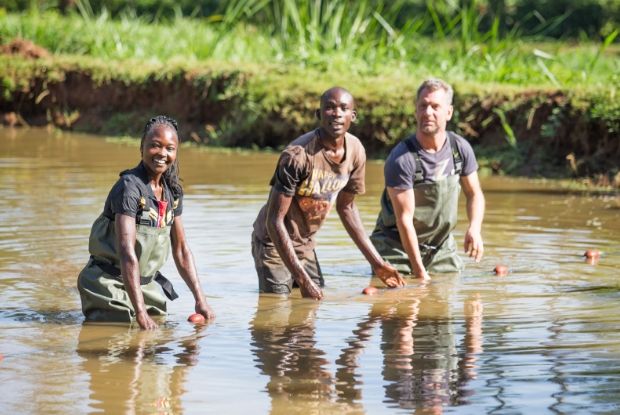 Taking to the water to help size the fish

Suzanna from Vihiga, western Kenya, is one of many farmers meeting the growing demand for fish by developing environmentally friendly farms in fishponds. “We have been working with Farm Africa for six years. They have made a tremendous difference to our farm, in terms of providing fingerlings [baby fish] for us, providing guidelines on how to feed the fish, how many grams they can weigh and so on and so forth,” she says.

Dale-Roberts joined Suzanna for the day’s harvest and, while his assistance was appreciated, what the staff were really waiting for was his expertise in the kitchen. “Catching the fish this morning was the easy bit,” he says. “Now we’ve got to fillet it, make the sauce, make the ugali. Hopefully I can create something delicious.”

Even one of the world’s best chefs isn’t immune to the pressure of cooking in an alien environment. “I’m feeling nervous; totally out of my comfort zone,” Dale-Roberts admits. “We do a nice dish at The Test Kitchen where we smoke the fish bones to make the sauce and serve it with fennel. Then we fry the fish and poach it in butter. So I’m going to take a little bit of the fish dish we do in The Test Kitchen and try to do it here.

As they prepared the fish, Luke asked one of the crew, Zinath, how switching for farming crops to fish had changed her outlook. “Fish farming is creating quite a number of jobs,” she says. “You can see people here on my farm: without the fish farm, they wouldn’t have jobs. That’s why I say fish for a healthy, wealthy living. It creates jobs, it creates wealth, it creates education.” 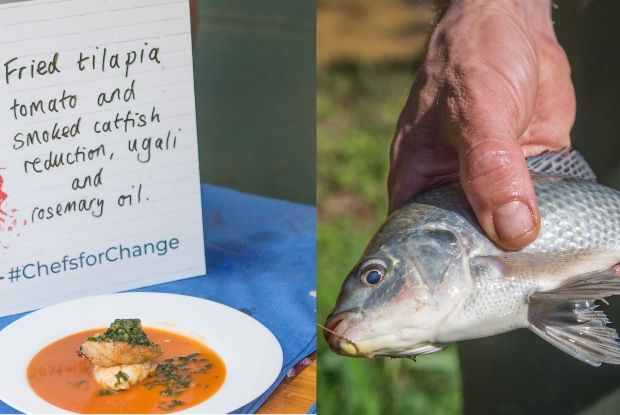 Fish of the day - Dale-Roberts' creation

It’s fair to say the supper went down well. Thirty clean plates and an empty cooking pot saw locals asking Dale-Roberts when he might be back to cook a second service. “This trip to Kenya, to Kisumu and Nairobi has been fantastic,” he says. “It’s given me a true insight into what it is to farm fish and to create a sustainable future.”