Eight reasons why Masque is changing the Indian culinary landscape

Masque in Mumbai, India, has been named the Miele One To Watch for Asia’s 50 Best Restaurants 2020, an award that identifies a rising star restaurant in the region. Discover what makes Prateek Sadhu and Aditi Dugar’s modern Indian restaurant stand out

Away from Mumbai’s traffic and noise, in one of the city’s former textile mills and hidden behind a nondescript black door, is one of Asia’s most promising restaurants. Opened in September 2016 by chef Prateek Sadhu and cook-turned-entrepreneur Aditi Dugar, Masque pays tribute to India’s diverse produce through a 10-course tasting menu – an interactive and exciting two-hour journey alternating moments of nostalgia for the country’s traditional flavours and fresh taste discoveries.

“It was high time people changed their perception of what Indian food is – it's not about kebabs and biryanis, there's much more to it,” says Sadhu, a 33-year-old Indian cook who lists world-famous restaurants such as The French Laundry, Noma and Alinea on his CV. “India is so diverse, it’s an accumulation of different cuisines from as many as 29 states, each with their own traditions and food cultures, so it’s about putting these 29 countries together.” 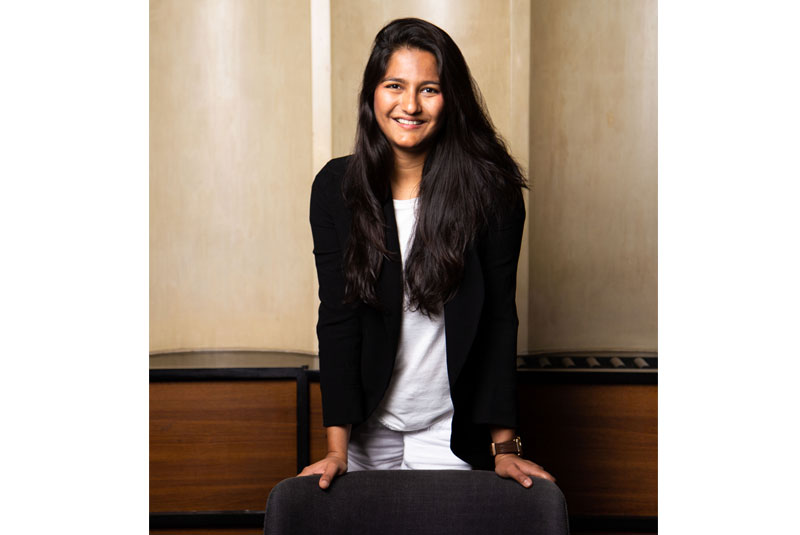 Sadhu was scouted by Dugar – now the restaurant director – while working as chef at a hotel group in Mumbai, and soon the entrepreneur approached him with a proposal to open his own restaurant. “With Masque, we wanted to create something that we could truly feel proud of, through which we can help put India on the map. We want to be a restaurant that people visit to experience progressive Indian food. Over the last three years, we've been able to achieve that, and it gives me great pride and belief in our vision,” says Dugar.

Now, Masque has been selected as the recipient of the Miele One To Watch Award 2020, and the duo couldn’t be more excited. “I was literally pinching myself when we found out that we had received the award,” says Sadhu. “We are really motivated – this gives us a chance to showcase Indian food to the world.” Discover what Masque is all about and what makes it stand out in our eight highlights.

1. It was the first restaurant to introduce the tasting menu-only concept to Mumbai

Masque’s ten-course tasting menu is inspired by and based on seasonal ingredients. When it opened, it was the only restaurant in Mumbai that didn’t also provide an à la carte option. “Instead of having 30 or 40 dishes on the menu, we thought we would rather highlight the seasons and micro seasons of India,” says the chef. “This was the format that worked best to tell a story to the diner and highlight the best produce that the country has to offer.”

The ever-changing menu, available in vegetarian and non-vegetarian formats, may include green almond with its milk and corn pani puri; raisin-glazed quail with yakhni broth and spruce oil; and yak cheese with apricot and buckwheat. “Sustainability was always a part of Indian culture. If you go back to my grandma's generation, they would eat super seasonal food,” adds Sadhu.

Dugar also highlights that in a hectic city like Mumbai, people rarely have time to slow down. “Often, you don’t have even time to sit down for a proper meal for 20 minutes, but with Masque, you're sitting there in an immersive experience for two hours. You really feel that you pause, because you lose track of time,” says Dugar.

2. It serves Indian ingredients difficult to find anywhere else

When Dugar approached Sadhu with her business proposal, he had one condition. “With me being an urban city girl, he felt that I didn't know what India had in store,” says the Mumbai native. “So, before we joined hands, we travelled together for 18 months, visiting farmers in different regions and tasting local food. As we did this, his idea and vision became clearer and that's how we decided to do this restaurant together.”

During this period of travelling, Sadhu focused on finding ingredients that may be known locally, but aren’t popular everywhere in the country – he says that diners often don’t even know that the ingredients he uses can grow in India. Berries such as hisalu, kafal, sea buckthorn and cloudberries are examples of the produce the chef discovered and eventually started using at Masque, creating dishes such as his squid and sea buckthorn. 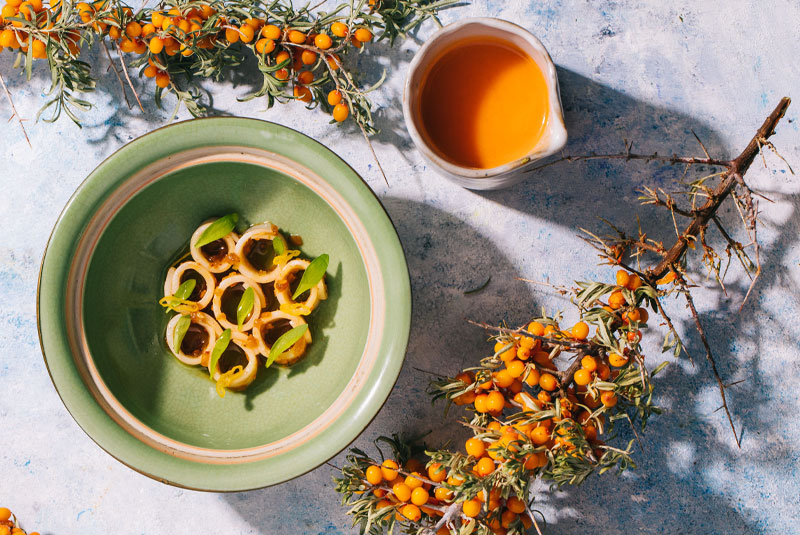 3. Its kitchen occupies 50 per cent of the restaurant

According to Sadhu, one of the most progressive aspects of Masque is its kitchen. “We dedicated around 50 per cent of the restaurant space to the kitchen,” he explains. “We wanted diners to come to our kitchen and see how we do things. The way the kitchen is laid out also gives everybody a good sense of space, and therefore good creative freedom for the entire team.”

The kitchen is also the setting where one of the courses on the tasting menu is served, adding an element of fun to the meal. “The course is a play on the idea of eating fruit with salt and chilli,” explains Sadhu. Currently, it’s a serving of passion fruit with smoked chilli salt. “When you put it in your mouth, it brings back memories of eating similar preparations as a child – a tradition of India as well as other Asian countries.”

“There is always an element of fun in our menu,” says Dugar, giving the example of a dish inspired by Chef Sadhu’s memory of being a student in New York and trying the city’s famous bagels. In this preparation, the guests are served crab, chutney and fresh bread, and they have to build their own sandwiches. “It's really fun when the diners are eating this dish, because you get to interact with them and show them how to assemble and eat the sandwich,” adds Sadhu. 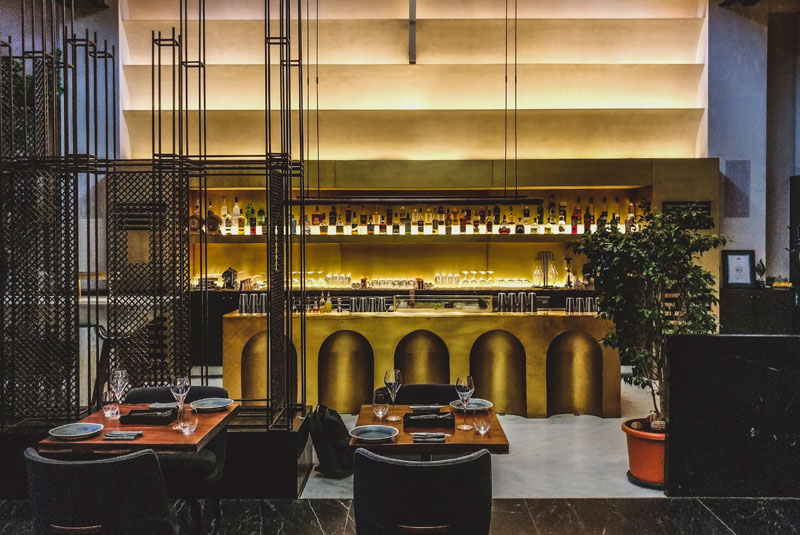 5. It’s housed in an old cotton mill outside of Mumbai’s centre

Masque’s elegant and airy feel is the result of its location in a large former textile mill to the south of Mumbai’s centre, surrounded by design stores and hip shops. “The moment we saw the space, we fell in love with it,” recalls Dugar. “It’s really serene and quiet, because it’s the only commercial space in the mill. We thought we could make this space our own and develop our language, and that diners would come especially for us – it wouldn't be a restaurant that you just stumbled upon.”

Featuring high ceilings, fluted walls, a stylish bar and marble counters, and decorated with plants and industrial-style black iron details, Masque truly feels removed from Mumbai’s noise. “You drive through this dark lane, open a black door and you come into the restaurant. It’s a wild experience for our customers,” says Dugar.

6. It proposes a new language of modern Indian food

“For us, modern Indian food isn't about taking traditional recipes and plating them with a few tweaks,” says Sadhu. “It’s about revisiting ingredients in different ways – ways that can build cross-cultural bridges. Sometimes, that means combining the essence of two dishes into one, other times, it involves borrowing the central idea of a dish, but making it with entirely local ingredients. It's a new kind of Indian food.”

With between 60 and 70 per cent of its diners coming from across India, Masque had to offer something different to attract a loyal clientele. “Initially, there was some hesitation [from diners] because it was something that had never been done before,” he says. “We are changing the idea and the language of modern Indian food. Three years down the line, people who have come to the restaurant know what we stand for and what we are trying to do. The flavours are familiar, but the way we arrive at those flavours is completely different.” 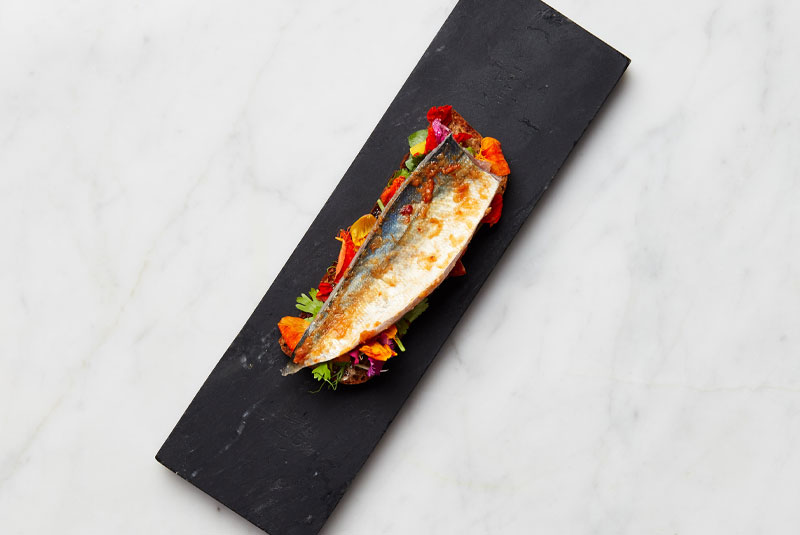 7. It plays on nostalgia to create new flavours

Making reference to traditional techniques, regional preparations and local ingredients, Masque’s recipes play on creating feelings of nostalgia and longing in the diner – as seen through Sadhu’s creative lens. A perfect example is the chef’s dish of smoked mackerel and buckwheat toast. “It’s inspired by a preservation technique from Kashmir in which the fish is burnt, then pulled apart and eaten with bread and chutney,” he explains.

“When you eat the traditional dish, there are three main elements: the smokiness, the freshness of the chutney and the bread. At Masque, we do a version of the dish in which the mackerel is smoked on the hearth for just three minutes before being served to the diner, with a chutney made from the fresh ingredients we have available at our farm, and Indian bread. When you put the bite in your mouth, it transports you back to that old traditional dish: though it looks different, and the ingredients are completely different, it's still so familiar. Traditions are very important, but to preserve those traditions, change is necessary.”

8. It sources 70 per cent of its produce from its own farm

With the ingredient at the heart of everything that Masque does, Sadhu and Dugar wanted to make sure they could source the highest quality ingredients and thus decided to have their own farm, from which they source about 70 per cent of the fresh produce used at the restaurant. Located in Pune, two and half hours away from the restaurant, the organic and biodynamic farm grows Indian vegetables and fruits, including – in this season – radishes, beetroots and squash varieties.

“The farm really defines what we are putting on the menu and that's also why the tasting menu becomes important, because you want to showcase what India has to offer,” says Sadhu. The chef also uses it to do some R&D, bringing back different plants from his travels and trying to see if they can grow in India – his most recent experiment was with a finger lime plant from Australia.

The full list of Asia’s 50 Best Restaurants 2020, sponsored by S.Pellegrino & Acqua Panna, will be revealed through a virtual awards ceremony starting at 8am GMT on Tuesday 24th March. Watch the stream on Facebook and YouTube and stay tuned to our Instagram and Twitter for the latest news, photos and features.