Chef and restaurateur Jaime Pesaque is leading a quiet revolution in Peruvian gastronomy. The creator of many acclaimed brands including 500 Grados, Mad Burger, Yachay and Mayta – which received the Highest Climber Award, sponsored by illycaffè, at Latin America’s 50 Best Restaurants 2020 – Pesaque is well on his way towards becoming Peruvian cuisine’s next spokesperson. Here are six ways he’s refreshing his country’s beloved gastronomy through his food

Mayta was the first restaurant that Pesaque opened in Peru 12 years ago, following a series of formative international experiences. In his time in Europe, he attended the Italian Culinary Institute for Foreigners and worked at Best of the Best restaurant El Celler de Can Roca in Spain. Since then, he has been constantly updating and evolving his unique take on contemporary Peruvian cuisine – and when the pandemic hit, instead of pivoting, he decided to double-down on his efforts.

“Why did we work so hard for so many years only to reinvent ourselves?” he asks. “We’re not going to stop doing what we do. So, at that time, we said: ‘Let’s take risks and face this situation by setting an example and showing strength and motivation. Let's show the city, the country and the world that we have a strong passion and that problems are solved by working hard and questioning ourselves’. This last evolution of the restaurant has been a bit more aggressive, in the best possible way – we were less shy.” 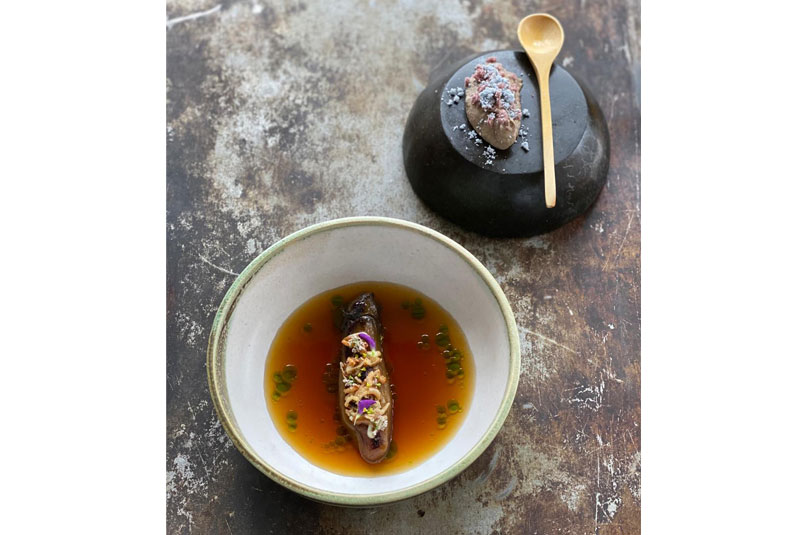 From the Yachay tasting menu: grilled eggplant with eggplant and onion jus and smoked eggplant shake

As a result, Mayta launched a new tasting menu called Yachay (more on this later), while Pesaque focused on being the best possible leader to his team. “We realised that we depend on each other, that selfishness doesn't work and that we have to think of the common good,” he continues. “Financially, it was so complicated, but emotionally and mentally, we were better and more solid than ever.”

2. …but he is also focusing on accessibility and casual fare

Aside from Mayta, the group’s flagship restaurant, Pesaque owns several other well-known and loved brands in the Peruvian capital that give him the chance to focus on different cooking techniques and reach a wider audience.

First, there’s the casual 500 Grados (meaning ‘500 degrees’), which is built around two wood-fired ovens. One oven, which is at slightly higher temperature, is mainly used for bread, pizza, cookies and other pastries; while the other, with a lower temperature and suited to longer cooking times, is perfect for delicacies such as chicken wings, burgers, ribs and much more.

Then there’s Mad Burger, a crave-worthy brand serving Pesaque’s artisanal takes on American classics such as hot dogs, chicken poppers, milkshakes and – of course – the traditional cheeseburger. Finally, opening in May 2021 is Sapiens, a new concept based around a series of wood- and charcoal-fired grills, divided into meat, seafood, rice dishes such as paella, and vegetables.

These neighbourhood restaurants form the backbone of Pesaque’s business model, while also giving him an avenue to cater to more people. They presented an offer that was easily adapted for delivery and take-away, which prospered during the lockdown.

3. With Yachay, he’s researching and evolving his country’s cuisine

Pesaque’s family owns a pisco vineyard in the desert region of Ica, about two hours’ drive south of Lima – a part of Peru that has always fascinated the chef. Here, he founded Yachay, which he describes as a “space to disconnect from the everyday and reconnect with curiosity and exploration”. 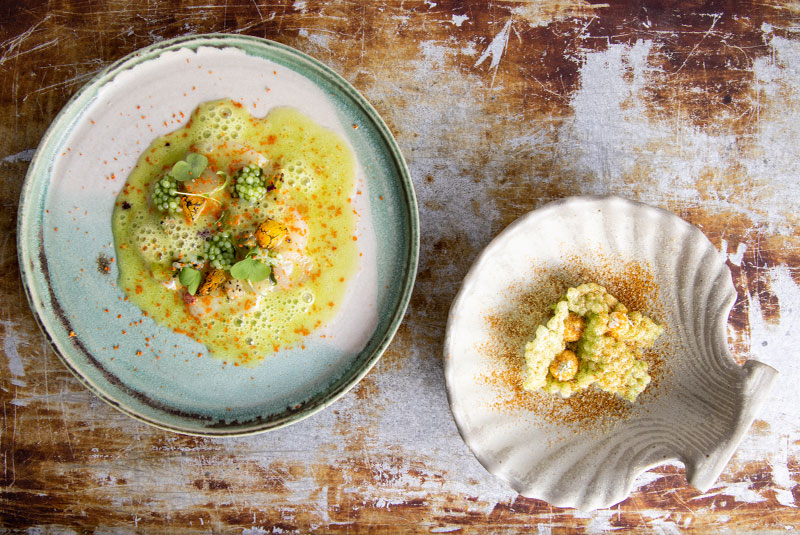 “Ica is found in an area considered a fertile desert,” he says. “We started by creating a garden of about 600 square meters and realised that vegetables grow in a completely different way there. They are crunchier and saltier thanks to the soil, the climate and the sea breeze. We visit Yachay weekly with the team to harvest, think and cook. We have a small kitchen there, and eventually, perhaps in a year and a half, we’d like to open a gastronomic restaurant.”

Yachay has also provided the inspiration for Mayta’s latest tasting menu, launched in 2020. Focusing on vegetables and seafood products (despite being a desert, Ica is only eight minutes away from the sea), this is the purest incarnation of the chef’s culinary identity. Some of the highlights include a grilled eggplant dish with eggplant and onion jus and a smoked eggplant shake; and baby corn with a pecan emulsion, quinoa flowers and corn sprouts.

On entering Mayta, guests are often in awe at the sight of the bar, featuring glass bottles of all sizes and shapes filled with colourful liquids. For Pesaque, this is an essential part of Peruvian gastronomy: “Although I’m a chef, we’re in constant communication with the bar,” he says. “What we think and investigate in the kitchen is often transferred to our bar team.” 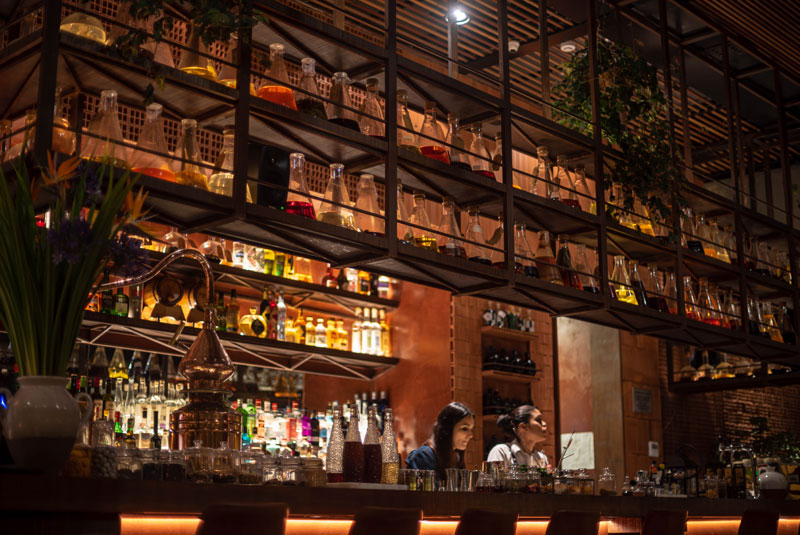 The chef highlights that the bar does many of its own distillations – including, in 2020, creating an anti-bacterial solution by distilling macerated pisco, resulting in a more pleasing aroma for guests than store-bought hand sanitiser. Pesaque also highlights that they have a bartender fully dedicated to coffee who goes on monthly trips to source his favourite organic, Peruvian coffee blend for the restaurant. All these details fit seamlessly into a quintessentially Peruvian experience.

As well as the full tasting menu experience inspired by Yachay, Mayta also offers an extensive à la carte menu of contemporary takes on traditional Peruvian techniques and preparations. Pesaque’s favourite is the sarten de pato (duck pan). “Some guests come to the restaurant with a photo of this dish and say: ‘This is what I want to have’. It has become quite iconic,” he says. “It’s inspired by a recipe from the north of Peru of rice cooked with duck, coriander, chicha de jora [corn beer], and zapallo loche squash.

“In our version, we make a point of using the whole duck. We cure and smoke the breasts, the legs are candied, we use a duck egg, and we preserve the liver, interiors and tongue to make a sauce,” he continues. “The techniques have evolved from the traditional recipe, but we also show that we respect the animal – we are trying to send a contemporary message without losing all the flavours and history of the dish.”

A post shared by Mayta Lima by Jaime Pesaque (@maytalima)

6. He’s turning his restaurants around the world into embassies for Peru

At a turning point in Pesaque’s career, he recalls serving a customer at his (now closed) restaurant in Hong Kong. “This guest came to the restaurant and said: ‘I want to be honest, I don’t even know where Peru is, but a friend told me that I had to eat here’. I served his table, plated his dishes and looked after him personally. Three days later, he came back with his family. He told me that he had loved Peruvian cuisine and it sparked something in him. He had bought tickets for his whole family to take a week-long trip to Peru. That’s when I realised that restaurants are embassies of our culture and that we have to take that seriously,” he says.

Currently, Pesaque has restaurants in The Hague, Netherlands (Callao Cevicheria); in Miami, Florida (several branches of brand Suviche); in Milan, Rome and Porto Cervo in Italy (Pacifico); and is next planning to open in Mykonos, Greece. “Every time we have an opportunity to open a restaurant outside Peru, it’s our responsibility to bet on something Peruvian. What we’re doing at each of our restaurants is culture,” he concludes.

Catch up on all the highlights from Latin America's 50 Best Restaurants 2020: