Powering creativity: Helena Rizzo on the patchwork quilt of inspiration behind Maní

For the best chefs in the world, creating the unimaginable isn’t a linear process; it’s an endless dialogue that stems from many different seeds, often over a period of years, if not a lifetime. In the first article of our three-part ‘Powering Creativity’ series in partnership with Miele, Helena Rizzo, chef-owner of Maní in São Paulo, finds inspiration in everything from pasta to pioneering technology. Here, the Brazilian cook and brand ambassador for Miele’s Generation 7000 series talks us through some of the elements that fuel her imagination

With Italian, German, Portuguese and English roots and an upbringing in Brazil’s immigration-rich south, it’s no wonder Rizzo cites diversity – of both her family and her country – as one of her biggest creative muses. “Brazil is such a diverse country,” she says. “Our cuisine is like a patchwork quilt with a mix of influences that are similar but different; distant, yet always connected in some way.”

São Paulo, where Maní is located, is home to the biggest Japanese population outside Japan, as well as vast Lebanese and Syrian communities. “I love Japanese food and it connects well with northern Brazilian and Amazonian cuisine, so I like to bring the two together. We also play with Arab flavours – I love using ingredients like mint and za’atar.” Maní merges Italy with Japan in dishes such as squid ramen and Rizzo’s signature gnocchi with tucupí dashi. 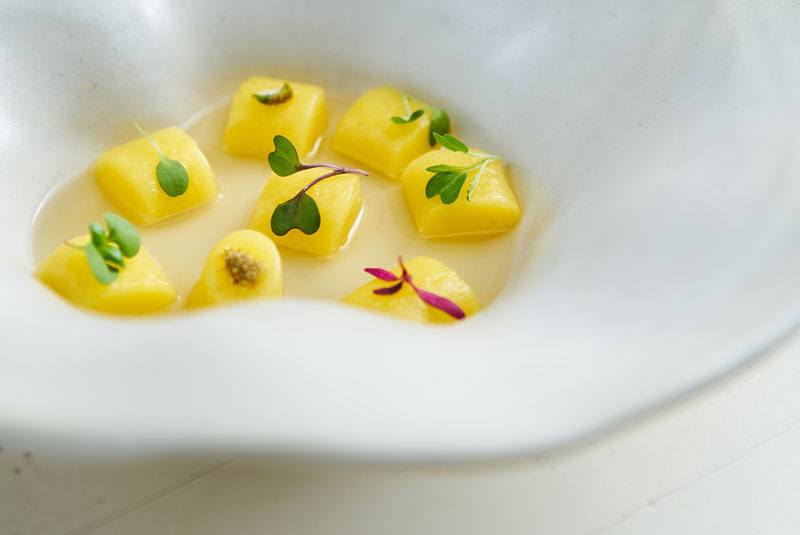 Rizzo grew up in Porto Alegre in the southern Brazilian state of Rio Grande do Sul, which, like the chef, has strong German and Italian heritage. She mines childhood food memories to inform her cooking. “In the south, we eat a lot of pumpkin tortelli, which is a much more rustic version of the classic Italian tortelli di zucca. On the weekends, we would buy fresh pasta from the market and eat it at home or at my grandparents’ home.” Now Rizzo recreates those formative experiences with a version of Italian tortelli with peach palm and squash, as well as referencing her enduring love for Italy via her popular capellini with mushrooms, butter and Sicilian lemon dish.

From an early age, Rizzo has always loved drawing and painting and her home was a hive of creativity. “My mother worked as an art teacher so she always encouraged us to draw. There was always paint, paper and clay at home. The three of us – me and my younger brother and sister – all loved design, and my sister is now a talented stylist.” These days, the chef finds therapy in art, always doodling or experimenting with ideas on paper.

“To draw freely, just pick up a pen and see what happens, is something that really does me good; it calms me.” In her 2016 book, Maní, Rizzo included her own illustrations and handwritten notes alongside the recipes for her signature dishes. 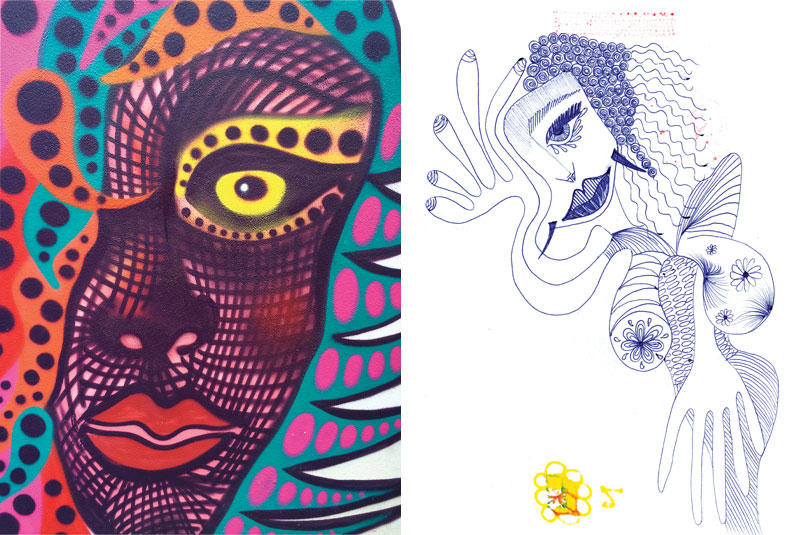 When she was preparing for a course given to Maní’s staff, Rizzo recently researched Brazil’s traditional caipira, or countryside, cuisine and was inspired by native fruits such as jabuticaba and bacupari. “I love the tropical fruits we have here, they’re such an important expression of Brazilian terroir… We have such an impressive and infinite diversity of plants, and ingredients, and we don’t even know the half of it.”

But when it comes to her creative process, it is the ingredients that drive the chef, and not the other way around, resulting in a productive dialogue. “The moment you get your hands dirty, that’s when things reveal themselves. The process carries you along with it and you only really discover if something is going to work when you try it.”

For Rizzo, that intuitive process is very much a team effort, not an individual one, and she says ideas come from all of her staff. “I’m not the only one responsible for our creations. My team bring things into the mix and I like the fact that we share things, because it’s important for people to see themselves in their work.” 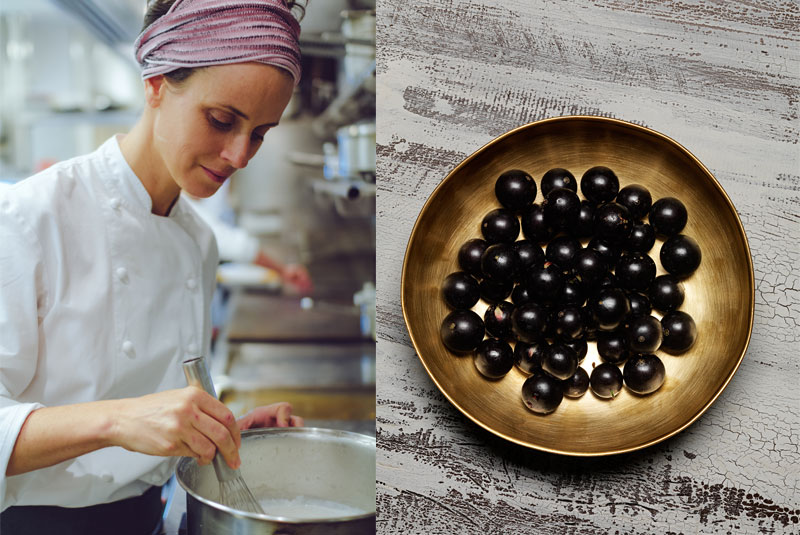 Early in her career, Rizzo was invited to write a weekly food column for a Brazilian newspaper, which led her to read extensively. She enjoys culinary books like Contra los Gourmets (Against the Gourmets) by Spanish author Manuel Vázquez Montalbán as well as Brazilian writers Luís de Câmara Cascudo and Carlos Roberto Dória. “Reading has always inspired me in the kitchen. You might read the history of an ingredient and then that takes you to a certain combination, which helps you create a dish.”

While Rizzo is constantly inspired by culinary history, she can’t necessarily trace back the starting point of each dish. “Inspiration is never objective. We have to be open to absorb everything, and then at some point an idea will spark.”

When it comes to the execution, all the inspiration in the world can’t be transformed into the perfect dish without the right technology, and Rizzo says she values precision in the equipment she uses. “To make sure something is cooked to perfection, you need precise temperature and uniformity. For example, we make a lot of crisps and we need to know that if we put it in at 60 degrees, it will be cooked at 60 degrees throughout.” One of Maní’s most precise dishes is a serving of lightly grilled tuna with avocado puree, quinoa tabbouleh and a corn crisp. 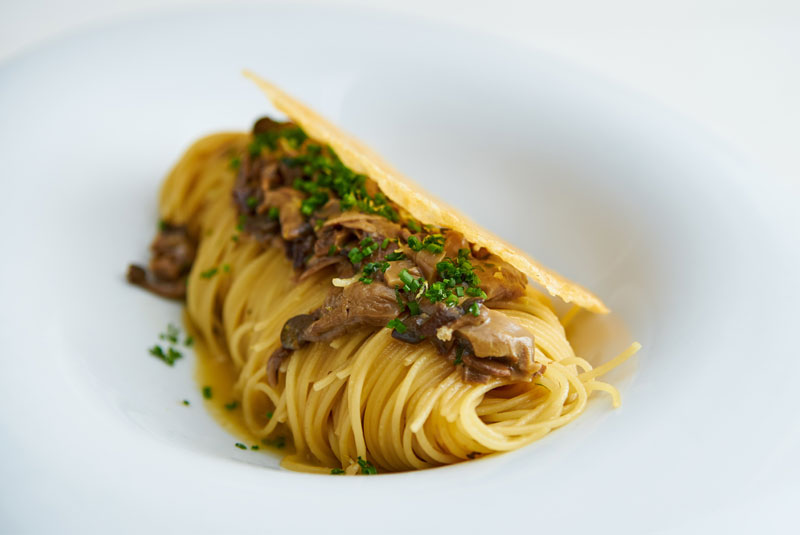 Married to a musician [Bruno Kayapy of Macaco Bong] and with a lifelong love of punk and artists like David Bowie and Depeche Mode, Rizzo finds enduring inspiration in music. It’s not as direct as a lyric triggering an idea for a dish – the chef says music is all about bringing good vibes and the right energy. “The thing about punk is the message of being who you are. It’s about creative freedom, freedom of expression. That philosophy inspires me and is reflected in my cooking.”

However, she never plays music in the Maní kitchen. “It’s hard to run service with anything playing in the background. Besides, the kitchen has its own music. I prefer to listen to the natural noise around me.”

For more on Helena Rizzo and Miele’s Generation 7000 series, follow @TheWorlds50Best on Instagram. Watch out for upcoming articles in the ‘Powering Creativity’ series in partnership with Miele featuring chefs Kyle Connaughton and Gaggan Anand.