Set in sprawling Californian wine country, SingleThread has been redefining perfection since it opened in 2015. In the second article of our three-part ‘Powering Creativity’ series in partnership with Miele, Kyle Connaughton, co-owner of SingleThread in Healdsburg, Sonoma County, finds his inspiration in everything from Japanese lacquerware to the ingredients grown on his wife’s farm. Today, the epoch-defining chef and brand ambassador for Miele’s Generation 7000 series lets us into the secrets that keep his creative juices flowing

The farm
SingleThread first laid down roots in Sonoma in the summer of 2014 when it began planting the crops that would grow to define its seminal opening menus. Katina Connaughton, Kyle’s wife and the co-owner of SingleThread, is the farmer whose hand is behind almost all that lands on the plate. “Everything here starts with the farm,” says Kyle. “Nearly every menu development meeting we hold takes place with my chefs and I walking around the farm. It helps me to think creatively; everything just seems to flow better in terms of the ideas we come up with.” Connaughton’s is a dialogue with ingredients that begins long before they arrive at the pass.

“Right now is a beautiful time of year for the restaurant and the farm. Spring arrives much earlier in this part of America than anywhere else,” he says. “We get the young fava greens, the first flush of peas, pea tendrils, wild radish and mustard. These crops are truly wonderful as they are very regenerative to the soil; they’re fixing its nitrogen content while also yielding all of these delicious things.” As well as dishing up some of the most forward-gazing food in the States, the Connaughtons deliver it with a side-serve of ambient education, where the wait staff subtly inform diners about the importance of crop rotation for the land’s ecosystem.

“We grow a lot of ‘cover crops’,” says Kyle. “There are some in the beds we are harvesting right now, those for next season and some in the growing spaces that are resting, anticipating the summer’s growth. These give us some great inspiration for dishes and we actually bring out a floral display of all the cover crops right before the meal begins and the guys explain the process of how important their role is in a farm such as ours. We do what we can to bring guests into our world.”

The SingleThread farm from above

My wife, Katina
The phrase ‘childhood sweethearts’ doesn’t do justice to the bond Kyle and Katina Connaughton share. They have been together since age 15, which initially may not sound so unusual. But when you consider that Kyle has spent his life flitting between countries learning his craft as a chef in some of the world’s best kitchens and the number of hours at the pass this entails, it begins to appear increasingly special. “We have been on this journey together for decades,” says Kyle. “We started this dream when we were teenagers and we opened SingleThread when we were 40 – it is amazing to see the fruits of our labour today.”

It’s the juncture where Kyle and Katina’s love collides with their mutual respect for the land that makes for their true, unique, catalyst for creativity. “I feel that my role as the chef is to show Katina’s work as the farmer in the best possible light,” he says. “When I think about the months and months that it takes to create an ingredient, it makes me feel an immense sense of responsibility. I will only have that piece of produce in my hands for one day, sometimes it will never even touch the refrigerator. I’m very proud of that.”

Japanese spirit
Connaughton’s restaurant is moulded in the Japanese spirit of ‘omotenashi’, a system where a restaurant operates on a basis of selfless and intuitive hospitality: a guest’s needs are anticipated before they have to ask. For the chef, this is less of something he has decided to adopt, but rather something ingrained in him from a very early age. “I had a very eclectic childhood,” he says. “I was the first in my family to be born in LA, but I spent a lot of my youth in Japan. My mother was from Norwich, UK, and my dad is from Ireland. We moved to Japan when I was very young for my dad’s work and Japanese culture just makes so much sense to me. All of these mixed influences feed into my ideas today, but Japan is at the core.

“I travel to Japan every eight weeks and the first thing I do when I get there is just walk through the fish market alone,” he says. “I find it incredibly relaxing and inspiring. I often see artists and other producers doing just the same. It is a place where I find extreme harmony.” This Japanese leaning comes through in his food. Even though you couldn’t define it as purely Japanese by design, tropes come through in nearly every course, with dashi-heavy stocks, impeccably prepared fish and a wagashi [Japanese confectionary] selection served with tea at the end of the meal that looks almost too beautiful to eat. 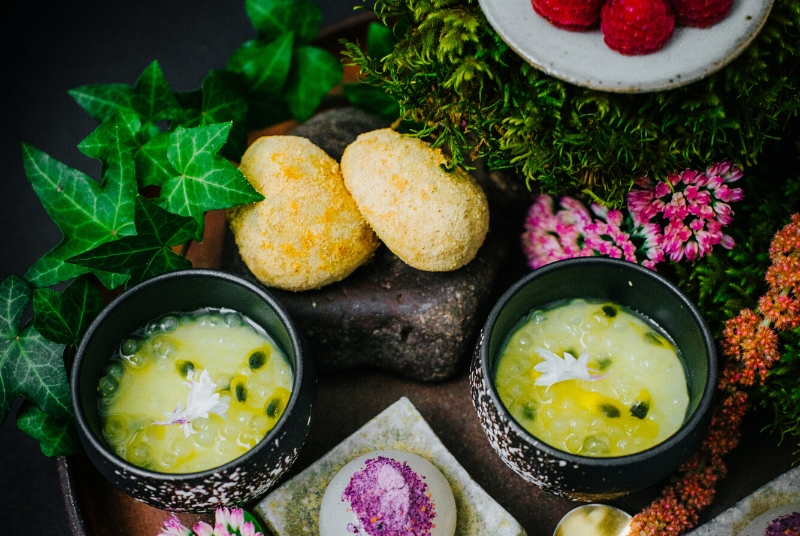 Craftsmanship and crockery
The Connaughtons value personal relationships very highly. Both Kyle and Katina are involved at every stage of the process and one another’s input is required before a dish arrives on the SingleThread menu. “For us, it’s a case of triangulating the farm, the plateware and the food – Katina and I are just the conduit for this symbiosis,” says Kyle. “I will regularly visit the kilns and lacquerware artists that we use in Japan. Quite often, I will design a dish based on the crockery that I have been shown.” Tables at SingleThread are laid with ceramics from the eighth generation of the Nagatani dynasty, the master potters who produce the earthenware donabe which Kyle uses for much of his cooking and many of the serving items that land on the table.

It’s a process that takes time and one that is always inspired by the pursuit of excellence. “Sometimes it can take up to six months to produce the plate,” says Kyle. “We talk about shapes, texture, look and feel – they will propose a piece and then I will arrive at an idea that works for that style of dish.” In this respect, SingleThread is not like any other restaurant. One piece may contain over a dozen different entry points as vessels for the food – each as considered as the last.

Peruvian enlightenment
“Now that the restaurant is three years old, I’ve been able to travel for research a bit more,” says Connaughton. “I went to Peru with 50 Best and Chefs for Change to meet some of the farmers and I was hugely inspired by their techniques and the way that they work. I brought some tubers back from Cusco and now they are growing at the farm.”

“The most inspiring meal I have had in the past 12 months was at Mil [Pía León and Virgilio Martínez’s restaurant] in Cusco. First off, it was a fantastic meal. Secondly, its basis is in anthropology, work with communities and respect for history. It was hugely inspiring on every level. It is a restaurant that wasn’t even meant to be a restaurant – it was designed as an outlet to show the work the community is doing. I was just sitting there eating this amazing meal looking out over these incredible Incan ruins – we still don’t even know what their purpose was. In California, we just don’t have this kind of history. It really stood out for me and is inspiring the menus we are creating this year.”

Technology in the dining room
Even though it is one of the most environmentally aware restaurants on the planet, SingleThread is also one of the advanced in terms of the technology it applies to every aspect of service. The lights in the restaurants are programmed to change seven times throughout the evening, subtly adjusting the ambience as the meal progresses. The system knows the time of year and adjusts the lighting based on the time of sunset and position of the sun and moon. “We actually go against convention by designing a lighting system whereby it actually gets a little brighter as the night draws on to give guests a little more energy,” says Connaughton. “The sound system is a directional spear that sits above each table to create individual sound environments.” Even though the restaurant thrums to the same soundtrack, music is projected around the table so the ambience remains, without hearing other tables’ conversations. It’s revolutionary sound and light architecture, pioneering technology where many restaurants are light years behind.

“We use a phrase from Japanese which means to ‘read the air’,” he says. “For us, it means to quickly understand the dynamic of the party and the way the guests want to enjoy the experience. Whether that means at a leisurely pace or with lots of information about the farm, food and wine, or if they way to stay engaged with their own conversations.” 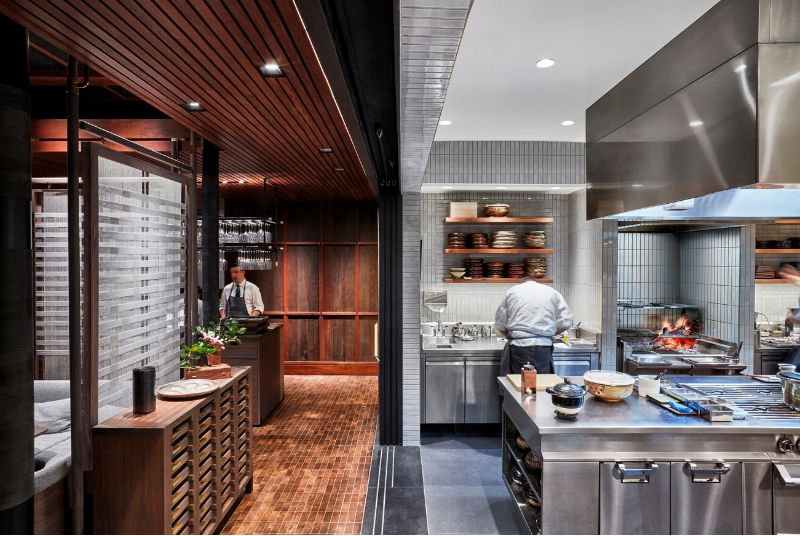 The kitchen blends seamlessly with the dining room

Technology in the kitchen
In keeping with the restaurant’s ideology, SingleThread melds the advanced with the ancient in the kitchen, too. “For us, the open hearth and donabe are as important as the Miele precision temperature combi ovens and immersion circulators,” says Connaughton. “One of our greatest pieces of technology that inspires us every day and helps us drive things forward throughout the entire restaurant is the Slack app. It’s an incredible real-time platform where exchange information and photos on vegetables from the farm, the foragers’ journeys as well as the new dishes, trials and recipes.”

Arguably the most consistent motif of continued evolution for SingleThread is its logo, the Japanese onion flower, kujo negi. It is the only vegetable that is evergreen on the farm and it adorns everything from servers’ shirts, to the signage and stationery. Indeed, it is the single thread that ties everything together.

For more on Kyle Connaughton and Miele’s Generation 7000 series, follow @TheWorlds50Best on Instagram. Check out Part One of the ‘Powering Creativity’ series with Helena Rizzo and keep an eye out for the third and final instalment with Gaggan Anand on 9th March