On Monday, 22nd November 2021, from 11pm UK time, 50 Best will unveil a special edition of its Latin America’s 50 Best Restaurants ranking and awards. Called Pasado y Futuro, the one-off awards ceremony will reveal the 100 best places to eat in the Latin American region of the last nine years, as well as celebrate the individuals who are making a difference in the country’s gastronomic sector.

Check out the Spanish digital programme to discover everything you can expect from this edition, and read on to discover what will happen on the night and how you can follow the action live


When will Latin America’s 50 Best Restaurants 2021: Pasado y Futuro, sponsored by S.Pellegrino & Acqua Panna, be announced?
This year’s special edition of the list and awards will be revealed through simultaneous broadcast on Facebook and YouTube on Monday, 22nd November. It will start at 5pm Mexico City and Central America time; 6pm Peru, Colombia and Ecuador; 7pm Bolivia and Venezuela; 8pm Brazil, Argentina, Uruguay and Chile; 11pm UK.

What can I expect from the show?
The awards ceremony will include a countdown of the 100 best places to eat in the region of the last nine years as well as several special award announcements. It will culminate in the announcement of the No.1 for this retrospective edition, which will be named The Greatest Restaurant in Latin America 2013-2021, sponsored by S.Pellegrino & Acqua Panna. 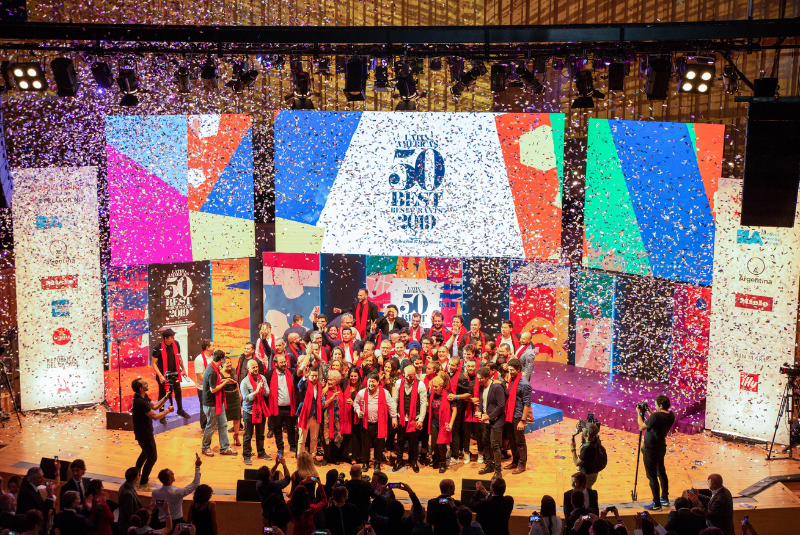 With many restaurants closed for much of 2020 and 2021, how was the list created?
This edition won’t look at the recent period, which is not comparable to anything in recent memory, but rather will go back to the past and forward into the future to provide an influential representation of the state of the restaurant sector in Latin America today.

The Pasado y Futuro list will therefore recognise 100 restaurants based on the aggregated votes of the previous eight editions of the ranking. Every year since the awards’ inception in 2013, the Latin America’s 50 Best Restaurants Academy – an ever-evolving body formed of more than 250 restaurant industry experts – has voted to select the best dining experiences in the region. In 2021, all votes from all previous editions were added up to create the unique ranking of Latin America’s 50 Best Restaurants 2013-2021.

What about the special awards?
The ranking will be accompanied by a series of special awards that look to the future, honouring individuals and restaurants that are helping to create positive change following the devastating impact of the pandemic on the restaurant sector. Moreover, each special award will not only be a chance to celebrate a single recipient, but also to shine a light on the shortlisted candidates worthy of the honour. Discover the shortlists for four special awards, including the Estrella Damm Chefs’ Choice – Best Reinvention and the Gin Mare Art of Hospitality Award, in this article; and the shortlist for the American Express One To Watch Award in this article.

Are any events taking place in Latin America?
To give the gastronomic community in the region the chance to get together again and celebrate its shared achievements, a series of local awards ceremonies will take place on Monday 22nd November in the following locations: Mendoza in Argentina; São Paulo in Brazil; Santiago in Chile; Bogotá in Colombia; Quito in Ecuador; Oaxaca in Mexico; and Lima in Peru. Catch up with the highlights from these events on the 50 Best social channels in the days after the event.