As 50 Best’s main sponsor, S.Pellegrino, celebrates its 120th anniversary, the global ranking broadens its scope in celebration, as well as exploring the future of gastronomy at a special birthday event.

The World’s 50 Best Restaurants aims to champion a diverse range of establishments – geographically, culturally, stylistically – without compromising its focus on revealing the greatest dining destinations on Earth. In 2019, it is adding 20 more restaurants to its extended list, shining the spotlight on more brilliant chefs and hospitality teams from across different parts of the globe.

For some years, the annual guide has actually named 100 restaurants in its full ranking: 50 on the night of the awards, and a further 50 – those ranked from 51 to 100 – in advance. This year, the organisation is extending the latter section of the list to 120 in partnership with S.Pellegrino to mark its main sponsor’s 120th anniversary.

On 18th June, one week ahead of the 2019 awards ceremony in Singapore, the extended list of those restaurants ranked from 51st to 120th will be announced via 50 Best’s social channels. Intrepid international diners can expect a raft of first-time entrants in locations spanning Belgium to Russia, Mexico to Macau. In total, 44 different cities in 25 countries will be represented with restaurants in the 51-120 list. 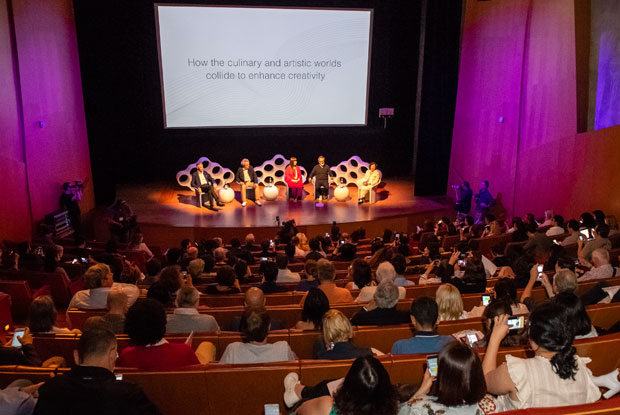 In 2018, 50 Best and S.Pellegrino hosted an event called 'Food Meets Art' at the Guggenheim Museum Bilbao

50 Best and S.Pellegrino are also joining forces to add a special element to the programme of culinary events taking place in Singapore from 22-26 June. On the morning of 24th June, ‘Food Meets Future’ will see leading chefs explore the building blocks of the gastronomic world going forward.

Co-hosted by Massimo Bottura of Osteria Francescana, the current holder of The World's Best Restaurant 2018 title, Food Meets Future will include: 50 Best chefs making commitments to a more inclusive future; an address by José Andrés, newly announced as the winner of the American Express Icon Award, on the responsibility chefs have to help feed the hungry; a Q&A session with young cooks quizzing their more established counterparts on nurturing the next generation; and an edible art installation created by innovative Singaporean pastry chef Janice Wong. The event affirms 50 Best and S.Pellegrino’s shared focus on encouraging positive changes in food and restaurant culture.

Key moments and messages from the invitation-only event will be featured across 50 Best’s social media channels.


Header image: highlights from The World's 50 Best Restaurants 2018 events in the Basque Country

Watch The World’s 50 Best Restaurants 2019 awards ceremony live from Singapore on the 50 Best Facebook page or via Fine Dining Lovers on 25th June from 1:30pm GMT.