Anatomy of a dish: Joan Roca on the Calçotada

Joan Roca, co-owner of El Celler de Can Roca in Girona, Spain, analysed the human footprint of his Calçotada dish for the launch of Chefs for Change, an initiative created by Farm Africa that brings together the world’s best chefs and the planet’s most remote rural communities, at #50BestTalks: Life Cycle, presented by Miele.

A restaurant with deep roots in its terroir and community, El Celler de Can Roca has become an institution of Catalonia and the whole of Spain and was voted No.1 in The World’s 50 Best Restaurants in 2013 and 2015. But its reputation is not only that of a restaurant serving delicious food – it’s also a place inspired by the local environment and products, and willing to give back to the community.

Speaking at #50BestTalks: Life Cycle for the launch of Farm Africa’s initiative Chefs for Change, El Celler de Can Roca’s chef Joan Roca said: “Landscape and nature have always been one of our creative inspiration sources and our cuisine aims to embrace our natural heritage with the restaurant. We believe we can cook the world you want, we can cook the world we want.”

To highlight the restaurant’s commitment to applying sustainable practices to different fields, Roca analysed the human footprint of the dish Calçotada, inspired by the Catalan tradition of grilling the local sweet spring onions known as ‘calçots’. Roca’s recipe included Ripollesa lamb from a local breed recovery project, recovered calçot seeds and a plate made from recycled glass. 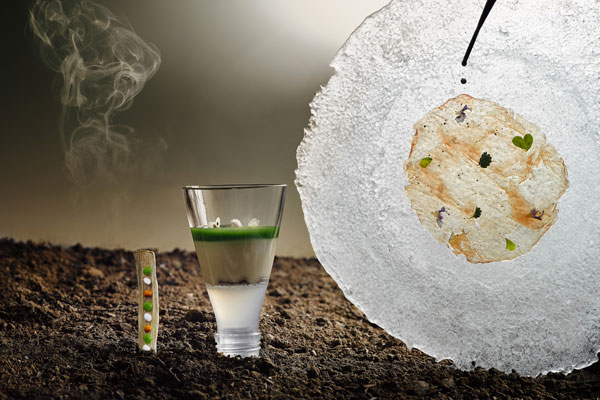 The calçots were grilled on live flames, then a calçot absolute was made by a local scientist in his laboratory. It was served with calçot cream, calçot leaf cream, freeze-dried calçot with parsley sauce and romesco sauce and calçot incense, then garnished with white garlic flowers. Many people were involved in the process, from local breeders to researchers and artists who work with recycled materials.

Nicolas Mounard, CEO of Farm Africa, said: “The Calçotada has a huge history of terroir, region and tradition. Talking to Joan, one of the common ingredients in our jobs is the balance between innovation and tradition, which is something we face when we try to change things on the ground. We need to embrace tradition but we also need to break it, growing from the tradition in the same way he’s doing with the Calçotada.”

The ultimate family business, El Celler de Can Roca in Girona is owned by Joan Roca – the restaurant’s chef – and his brothers Josep and Jordi, the sommelier and pastry chef. Always involved with the local community, since 2016 the brothers started working on altruistic activities further afield too, when they became Goodwill Ambassadors of the United Nations Development Programme.

“We started a project in Nigeria with farmers and chefs called Food Africa,” said Roca of the brothers’ initiative with the UNDP. “Kaduna is a region that suffers from hunger issues, and when the surplus of tomato crops is wasted, it’s terrible. Where this is no culture of preservation techniques, life is wasted. But we can share this knowledge with them.”

With their involvement in Chefs for Change, the Roca brothers will have an opportunity to help new communities, choosing from one of Farm Africa’s sustainable farming initiatives in Africa, Latin America or Asia, to support the local workers and help them develop their product and practices. “In Kaduna, the tomato has become a symbol of social development, of fighting poverty and hunger, and of economic growth. For us, it means more. It means that it’s necessary that we do our bit to help,” said Roca.

Find out more about Chefs for Change on the website, https://www.chefsforchange.org/

Now watch the process of the Calçotada being made:


EL CELLER DE CAN ROCA: CALÇOTADA from UMAMI on Vimeo.