In the third instalment of the four-part mini-documentary series, 50 Best Explores Peru, English chef James Lowe takes a vertiginous trip across the Andes. Local cooks Diego Muñoz and André Patsias join him on a journey of discovery of the outstanding – but relatively unknown – produce that grows in the mountains’ unique ecosystems.

On a sunny day, the short flight from Lima to Cuzco – the ancient Inca city set at 3,400m altitude in the heart of the Peruvian Andes – is nothing short of extraordinary. Ragged peaks, blue lakes and green valleys crossed by the shimmering snake of a river are the first taste you get of these unique mountains, which remain one of Peru’s still relatively undiscovered pantries.

Getting off the small plane at Cuzco airport, chefs James Lowe, Diego Muñoz and André Patsias are immediately approached by local vendors offering them small bags of dried leaves. Cuzco’s height above sea level means that visitors are almost immediately hit by the symptoms of altitude sickness: shortness of breath, headaches and nausea. But thousands of years ago, the local peoples figured out a natural remedy to help adjust to the altitude.

Despite its association with cocaine, research has shown that the coca leaf is high in nutrients and has many medicinal properties. In Peru, coca leaves are often dried and chewed, brewed in hot water to make tea or even made into candies. Muñoz immediately buys bags for the whole travelling brigade, instructing Lowe and Patsias to chew on the leaves until they start to feel relief from the sickness. 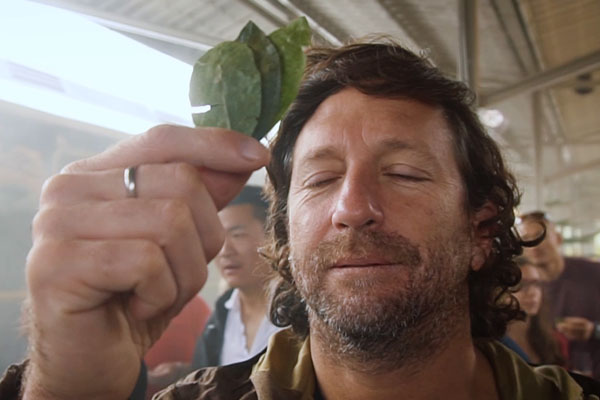 Popular among the Quechuas and the Incas, the coca leaf has an unparalleled ability to oxygenate the blood. It is also high in vitamins (A and B), iron, protein, riboflavin, phosphorus and calcium – more so than 50 other more popular vegetables, cereals and nuts, including peppers and quinoa. The amount of psychoactive alkaloid contained in dried coca leaves is so miniscule that, even if you chewed on them all day, you wouldn’t feel any of the effects of the drug; however, in order to deter cocaine production, its cultivation is often restricted, making the coca leaf an underused product even in local gastronomy.

The coca leaf is the first product on a journey of discovery of the ingredients unique to the ecosystems of the Andes. “Peru is a blessed country geographically, in terms of minerals, ecosystems, in the richness of the sea with the two different currents, and then the people,” says Muñoz, who has recently opened a new culinary project, a 10-people pop-up restaurant in his own Lima house called Atman.

Chef James Lowe of Lyle’s in London, No.38 in The World’s 50 Best Restaurants 2018, shares in Muñoz’s excitement. “The mountains have always drawn me and I’m really fascinated by the people who live here. It’s a very awe-inspiring kind of place and there is so much to learn. The more you travel, the more you realise you don’t know anything. It’s fascinating to be with these people, who have been using these products for a long time.”

One of the most advanced civilizations in the Americas before Columbus’ arrival in 1492, the Incas performed extensive agricultural research on the coca plant and other high-altitude flora, trying to adapt it for cultivation at lower altitudes, and to adapt other plants to grow in tougher conditions. One of the sites where they performed such research is Moray, a few hours’ drive from Cuzco – and the site where Peruvian chefs Virgilio Martínez and Pía León set up their restaurant Mil. 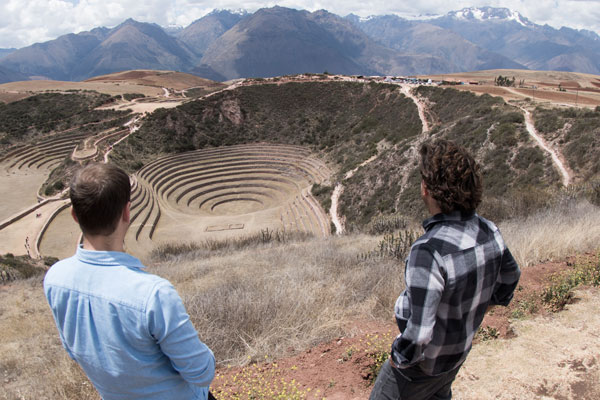 Lowe and Muñoz at Moray

At 3,380m, overlooking the terraces where the Incas performed their research and surrounded by a stunning backdrop of snowy peaks, Mil serves only products that grow on the nearby mountains. Martínez’s sister Malena Martínez has been leading the research to discover the produce via their Mater Iniciativa project and head chef Luis Valderrama works with the local farmers and producers to source the ingredients used at the restaurant, including 56 different varieties of potatoes, as well as urucu, kiwicha and chia seeds.

“There are over 4,000 varieties of native potatoes identified in Peru,” says Valderrama. Among the ingredients used at Mil, he highlights the muña, an Andean type of mint, and quinoa, a nutritious grain that has enjoyed a growth in popularity around the world in the last few years. Mil is not only a restaurant, but also a research centre where Martínez, Valderrama and their team research and catalogue new products, studying their gastronomic applications.

“There are 55 varieties of corn in the country. Then there is this alga, called cushuro, which is a colony of bacteria that prospers in lakes at altitude, around the shore, during rainy season. What is interesting about cushuro is not the flavour, maybe the texture, but it has more nutrients than quinoa and more protein than some meats,” says Valderrama.

Mil is surrounded by fields, and Lowe, Muñoz and Patsias are taken to meet the local farmers, who are planting the Peruvian tubers known as mashwas. The farmers have no irrigation system, relying only on seasonal rains, and use a rotating system to keep their fields fertile, as well as burning coca leaves to thank the earth for the harvest. 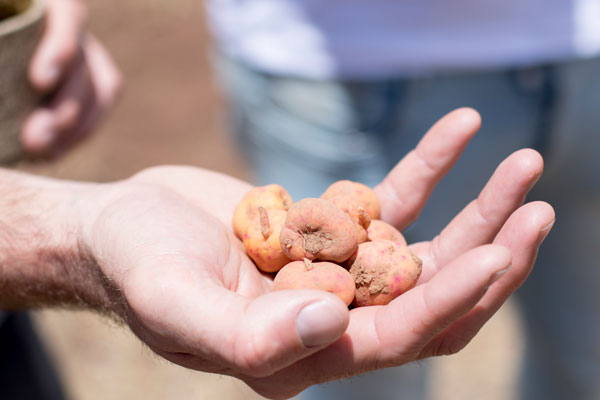 “This kind of tuber only grows at over 3,500 metres,” says Muñoz, who was head chef at Gastón Acurio’s restaurant Astrid y Gastón in Lima from 2011 to 2017, a period during which he had the chance to work with Andean ingredients. “This year the farmers are going to use this land, then let it rest, then use the other one and rotate it. The more they rest, the more fertile they are. They don’t use chemicals or fertilisers, just patience and time and a lot of faith.”

Even for the local chefs, these are not products that you come across every day. “The experience has been a surprise, as happens every time I travel within Peru,” says chef André Patsias of restaurant Statera in Lima, which opened in mid 2018. “This discovery is what I'm looking for as part of my restaurant philosophy and also because we have these wonders so close to us. It pushes me, my team and my restaurant to innovate, to be in constant change and movement.”

At Statera, Patsias strives to “integrate and generate new combinations, generate a new environment and a new concept of place between the products. I mix products that would never cross. I combine the Andes with a region as rich as the Amazon forest and the desert, the opposite ends of Peru,” he says.

Patsias discovered that it isn’t only solid ingredients that are unique to the altitude. Mil also offers a drinks menu made only of beverages fermented on site, including fermented pineapple, fermented tea and a fermented coca leaf drink known as chicha de coca. In recent years, the locals have also been developing other products that take advantage of the extreme elevation.

One example is distillates: with thinner air and lower pressure, the distillation temperature is lower and allows for a higher level of temperature control, one of the most important factors in the distillation of a good spirit. One such example is Caña Alta, a spirit produced from fresh sugar cane juice and distilled at 2,800m in the town of Ollantaytambo by a local company called Destilería Andina.

Another entrepreneurial local is brewing beer using the products of the mountains. Juan Mayorga founded the Cervecería del Valle Sagrado in 2014, focusing on “making traditional styles of beer using local ingredients”. The brewery uses produce grown in the Andes such as cocoa and muña to create Belgium-style beers, sour beers, and American and English ales with a unique Peruvian twist.

To experience the magic of the Andes and its produce, the group of chefs board the Belmond Andean Explorer train, Peru’s first luxury sleeper that crosses the nearly 400km of mountains between Cuzco and Puno, a city in the south of Peru. 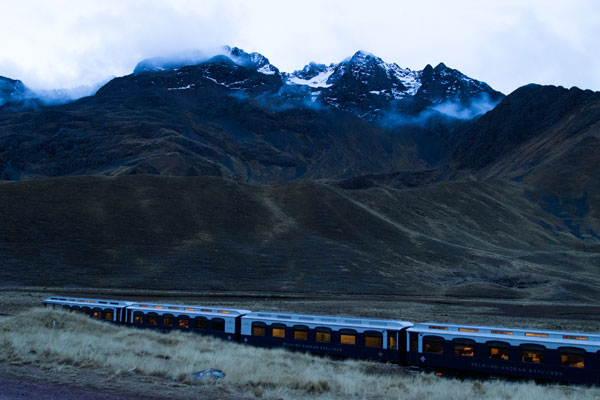 “When you travel with someone and you take them to discover what you already know, you discover it with new eyes,” says Muñoz. “You strive to show them beautiful things, but you also discover new things.”

Muñoz is also the chef behind the train’s unique menu, inspired by the mountain scenery and its produce. “To design the menu for the train was a great experience,” he says. “It was designed with inspiration from the produce of Cuzco, Puno and Arequipa, but also the celebrations and the cultural part of them, the traditions. There are little details around the menu that try to put in context what the train journey is.”

Light and varied, the menu is designed to suit the longer digestion times caused by the extreme altitude. As the passengers are transported across vast valleys, alongside frozen lakes and through colourful local towns and markets, Muñoz’s dishes provide a harmonious accompaniment, featuring Andean cereals, local chocolate and kañiwa, a local variety of goosefoot.

The trip on the Belmond Andean Explorer leads Lowe, Muñoz and Patsias to Lake Titicaca. The world’s highest navigable body of water, Lake Titicaca is at over 3,800m in altitude and straddles the border between Peru and Bolivia. The legend goes that the first Inca emerged from this lake, which has long been considered sacred by local peoples. The lake is dotted with islands that benefit from a unique subtropical climate, despite the elevation. 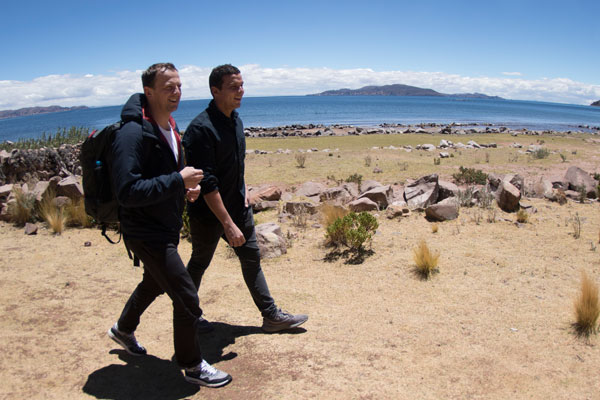 Lowe and Patsias on Taquile island

There are 105 floating islands on Titicaca, built by the Uru people, who have been living on the water for hundreds of years. Taquile is the biggest natural island, with a population of about 2,000. Here, enjoying the sunshine and tasting a local quinoa soup and grilled fish from the lake, the chefs reflect on their trip across the Andes.

“I've been lucky enough to have this great opportunity to show a piece of my country to a great cook and friend, James [Lowe], and also to André [Patsias], who didn't know this part of Peru either,” says Muñoz. “To have been able to take them on the train, which is for me an incredible experience and a wonderful service that we give in Peru, has been a privilege.”

“At the beginning, I thought: ‘When am I going to do that?’” says Lowe. “You just don’t have the time at the restaurant. The opportunity to have a really dedicated, intense period to see and experience as much as you can is incredible.”

“This is also socially enriching, because it is an important cultural exchange that we have and need,” says Patsias. “We all live in different parts of the world and we are all busy, and this kind of change, travel and experience allow you to break with that monotony, free yourself a little, take your backpack and exchange experiences, culture and knowledge. Even without being in my kitchen, I learnt something really important.”

Read about how Daniela Soto-Innes has joined Peruvian chefs Francesca Ferreyros and José del Castillo in the fight for a more sustainable fishing industry in the first episode of the series, and follow Jock Zonfrillo, Pedro Miguel Schiaffino and Matias Cillóniz as they explore the Amazon jungle.

Now subscribe to 50 Best's YouTube channel for alerts on the last episode of the 50 Best Explores Peru series, in partnership with PromPeru, where chefs Ana Roš, Pía León and Arlette Eulert explore the valley of Arequipa.