As JL Studio in Taichung, Taiwan, is named as the winner of the Miele One To Watch Award for Asia’s 50 Best Restaurants 2019, we talk to chef-owner Jimmy Lim about modern Singaporean cuisine, growing up behind a hawker stall and educating Taiwanese customers.

When he was only six years old, Jimmy Lim was already considered a gourmet. His father owned a hawker stall in Singapore, one of the famous street food stands central to the city-state’s gastronomic culture, which specialised in fish head curry. Lim loved this dish. “Most people only eat the flesh [of the fish], but since I was very young I liked the heads,” he says. “In Chinese culture, when you know how to appreciate the fish’s eyes, jaw and lips, you’re a gourmet.”

Years later, as his restaurant JL Studio is announced as the winner of the Miele One To Watch Award for Asia’s 50 Best Restaurants 2019, a prize that recognises a rising star eatery in the region, Lim recalls the days spent at his late father’s hawker stall as what inspired him to follow his dream.

“Dining should be fun,” he says. “Food should be an experience, with the guests coming and enjoying their night. It's not all about the food. Even though it was only a hawker stall, it was the way my father treated his guests, his generosity and hospitality, that stuck with me. When guests are enjoying themselves, because of the food or the wine or the company, it makes me so happy.”

Lim opened JL Studio in Taichung, Taiwan, in early 2017 with a clear ambition: to fulfil a vision of Singaporean cuisine that goes beyond the city-state’s traditional dishes, reimagining popular meals with new ingredients and presentations. “At JL Studio, I try to do three things: recompose, rethink and reimagine Singaporean cuisine. I brought traditional techniques and flavour profiles from Singaporean cuisine and reinterpreted them into a more modern sensitivity for the contemporary palate and for this era,” he says. 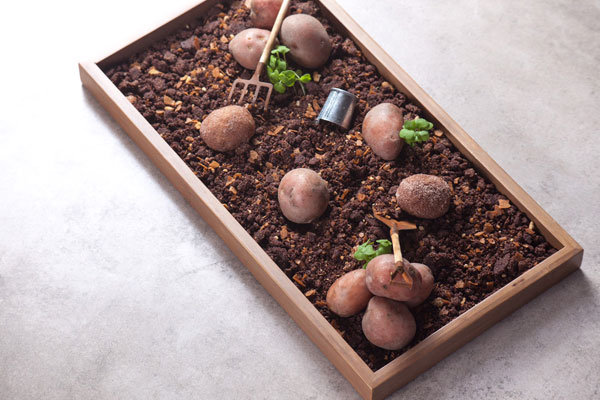 It all comes back to Lim’s days at the hawker stall, when he helped his parents by washing dishes and clearing plates while taking in their family recipes and food philosophy. “When I was in primary school, I was already strong enough to hold a wok, so my dad taught me how to make simple things, such as frying an egg or sautéing vegetables,” he says.

However, Lim was still far from considering a career in the kitchen – taller than most of his peers, he was passionate about sports and wanted to become a professional basketball player, until an injury cut this project short. It seemed logical to him to pursue a career in the culinary world next.

“Thinking back now, cooking was already inside me. It came so naturally to me. Even at home, I loved standing by the fire and watching my grandmother and my father cook. When I'm in the kitchen, I'm in my element,” he says.

Lim trained at the Singapore Hotel and Tourism Education Centre and there he realised that he was different from most of the other students – having grown up around pots and pans, he wasn’t afraid of the fire or the hot oil, and felt at home wherever he was cooking.

His career took off when, after moving to Taiwan in 2007 to gain more kitchen experience, he was introduced to award-winning chef Lanshu Chen of restaurant Le Moût in Taichung. “Chef Lanshu told me about how she wanted Le Moût to be a gourmet destination doing food with Taiwanese ingredients. That was hardcore ten years ago, it was a new way of doing things in Taiwan. She wanted Le Moût to be a European-style, Michelin-level restaurant, and that got me excited,” he says. 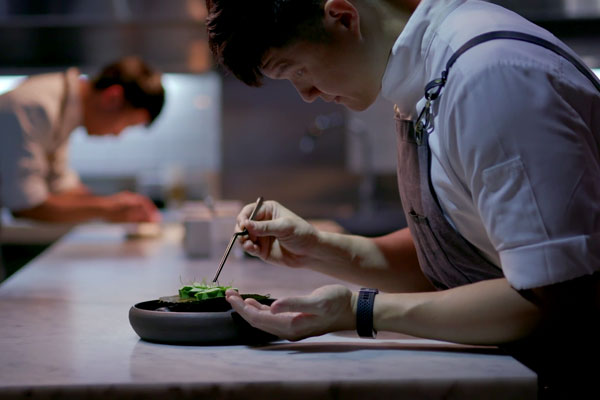 Lim working in his kitchen

It was the start of a fruitful relationship between Chen and Lim, as she became his mentor and guided him through different positions in the kitchen, leading him to discover the richness of Taiwanese ingredients. Lim eventually became Le Moût’s chef de cuisine until 2015 and the two are still close.

“She is a friend, a mentor and a great chef,” he says. “I really appreciate that she gave me the opportunity to run the restaurant – she handed me her kitchen and trusted me to run it. No matter if I failed or made mistakes, she supported me and let me carry on. That's so important in the learning process and I really appreciate it.”

When Chen was voted as Asia’s Best Female Chef in 2014, Lim travelled with her to Singapore to attend the Asia’s 50 Best Restaurants celebrations, sparking a dream that is now about to become reality. “I still remember being at the awards [ceremony]. I was standing at the back and thinking to myself: is it possible that one day I will be sitting among the award-winning chefs? Five years ago, I didn’t know what would happen, but I made a wish that I would attend again,” he says.

Lim will be travelling to Macao to take part in the 2019 edition of Asia’s 50 Best Restaurants, to be revealed on Tuesday 26th March, as he had hoped – but since he opened JL Studio at the beginning of 2017, it hasn’t been all smooth sailing.

“It was so difficult [when we first opened]. The first three months, I thought I would shut down the restaurant. It was difficult because people didn't understand my food and didn't know about Singaporean cuisine,” he says. Seeing a gap between the guest’s expectations and the dishes that were served at JL Studio, Lim set out to bridge it. 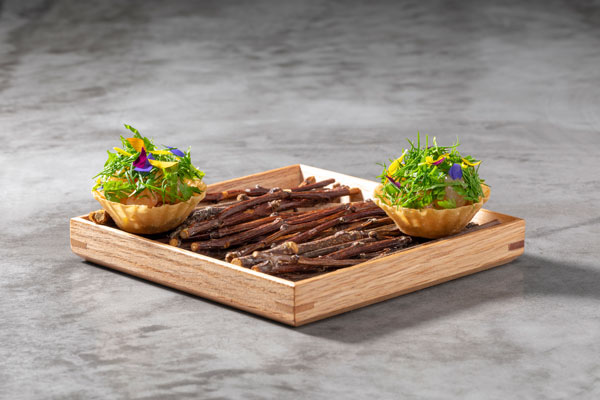 “I was doing Singaporean dishes, so the local guests had no reference point, no knowledge of them. I realised that it wasn't that they didn't like my food, but the understanding wasn't there. So I changed my service. I would go out and explain the dishes to them, explain why certain flavours come together, why a dish is spicy or sour, and how all these vibrant flavours are used to whet the appetite in a hot country like Singapore,” he says.

It took a few months, but as a result of the change, guests started appreciating Lim’s work more and more – until the restaurant really took off. In the two years since opening, Lim has been fine-tuning his concept and dishes, moving towards an approach that puts the ingredient at the centre and uses traditional Singaporean recipes and techniques as the framework in which the chef works.

“For the first two menus, I was trying to share my cuisine with the guests in Taiwan and let them know more about Singaporean food, so it made sense to deconstruct a dish in order to share it with them,” he says. “Now I need to push to elevate myself and do more. I'm looking more at the produce, as the local ingredients form a very important part of my creative process.”

Lim’s philosophy shines through a dish called Shroom Kut Teh. While visiting farms around Taichung, the chef tasted a local mushroom that impressed him for its flavour and meaty texture. The mushroom lent itself to being cooked with peppercorn and garlic – the same way pork ribs are cooked in the classic Singaporean version of a dish called Bak Kut Teh. 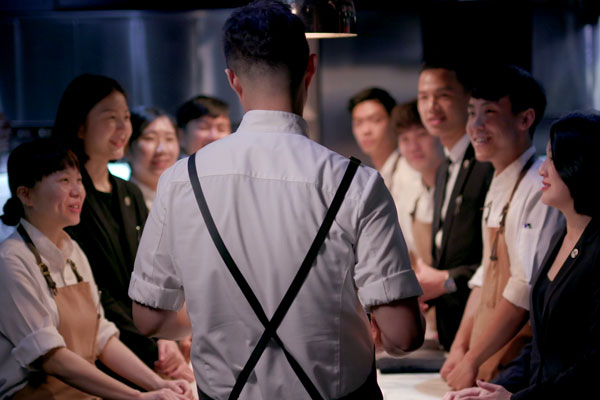 Lim and his team at JL Studio

Bak Kut Teh is a pork rib soup served across Singapore that carries Malay influences, whose flavoursome broth is the result of a mix of herbs and spices such as star anise, cinnamon, cloves and fennel seed. In Lim’s version of the dish, the broth is made from mushroom, and the pork ribs are replaced by mushroom, abalone and a jelly that imitates the texture of the meat fat. “I really like this dish because I started with these native ingredients and I added my heritage of Singaporean cuisine and my belief,” says Lim.

Although he has already reimagined many of Singapore’s traditional dishes at his restaurant, there is one in particular that the chef is still working on. “I haven't created my own version of the fish head curry yet, because I still haven't done it better than my dad's. One day it will come. This is one is so special to me – this dish is him, it's my dad. One day, when I'm ready and everything is perfect, then it will be on the menu,” he says.

Reflecting on the meaning of the Miele One To Watch Award for the restaurant and the team, Lim gets emotional. “[When I first found out about the award] my knees went weak. It's difficult to put it into words. We're so honoured to receive it, it means a lot to me and my team. At the same time, we're also very humbled by it, because this honour encourages us to continue challenging ourselves.“

The chef’s dream is to share his vision of modern Singaporean cuisine with the world, and he sees the award as a launch pad for the next phase of his career. “I want to share Singaporean cuisine with a bigger audience, because it is underrated and not many people really know about it. The flavours are so vibrant, the spectrum of flavours so wide, and it's so fun and interesting that more people should know about it.”