For the opening speech at #50BestTalks, presented by Miele, in Paris, Mauro Colagreco spoke lyrically about his approach to ‘cuisine without borders’

Mauro Colagreco tied his colours to the mast in Singapore back in June, when he collected the award for The World’s Best Restaurant, sponsored by S.Pellegrino and Acqua Panna, draped in the flags of the four countries that comprise his restaurant’s identity. “This [combined] flag represents the world for us,” said Colagreco on stage at The World’s 50 Best Restaurants 2019. “It represents Mirazur and the new French approach to cooking… This restaurant made me understand that cuisine is able to flow across borders.”

For the Paris edition of #50BestBestTalks: Beyond Frontiers at Musée du Quai Branly – Jacques Chirac, Colagreco further explored this concept by devoting his presentation to what he means when he talks about ‘cuisine without borders’.

“I am Argentinian, Italian and French,” he opened. “But above all, a chef anchored in the terroir of the Mediterranean.” In his restaurant Mirazur, located in Menton in the south of France a few hundred yards from the Italian border, he has the perfect case study. A multinational brigade staffs his kitchen, the techniques he applies to his food takes its influence from South America, Europe and the Far East, and the produce he uses comes predominantly from the few kilometres surrounding his restaurant. It’s global influence with local flavour.

“My roots are planted between two borders – France and Italy – between the sea and the mountains,” he said. “It is a huge opportunity for me to be here, to work with small producers and such rich culture and biodiversity. For me, a producer is someone who shares a heritage linked to their terroir. It is much more than simply using a supplier – I have a taste of the earth and a love for the terroir.” 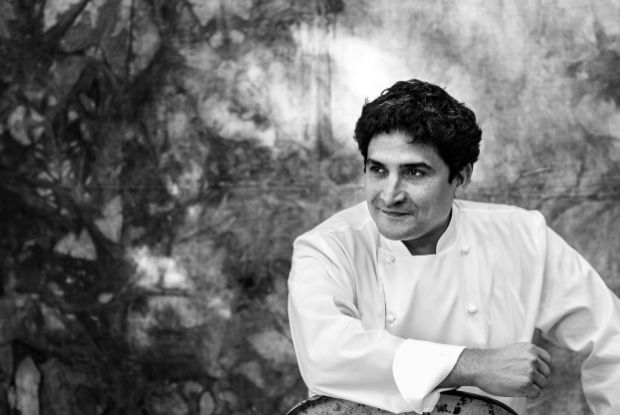 After explaining his philosophy towards ingredients, he dived deep into his approach to cooking. Close to his restaurant and overlooking the Côte d'Azur, he has five hectares of gardens that cascade down towards the sea. Every morning, the chefs work with the gardeners to pick the produce that will influence the menu that day. “My garden is a place of hopefulness, where everything is settled. Each component is important in maintaining the ecosystem of the soil. The gardens allow us to reconnect with forgotten or endangered produce. I prepare the ingredients in a way that I believe displays their unique characteristics best, from the techniques I have learnt on my travels. I allow myself total creative freedom to use influences from across the world.”

Colagreco’s journey is never far from the food he creates. He spoke lyrically about what brought his family to Argentina, his place of birth, and how the importance of multiculturalism was ingrained from an early age. “My aunt arrived in Argentina from Italy with a small suitcase and a fig tree branch, which her mother had given her and told her to keep alive… Today, we continue to enjoy figs from this tree.” Whether the figs he speaks of are edible or metaphorical, they reinforce the importance of the chef’s heritage of immigration.

“There is an emotion at the heart of cooking and a desire to integrate oneself. It is these desires that have shaped my life. I come from a family of immigrants who crossed the ocean with hope. I have built my identity through contact and exchange with others. I come from the American continent that illustrates perfectly the cultural encounters with native people. The immigrants come from around the world; they are never static.”

To conclude, he produced a statement that eloquently summarised his theory of a kitchen without boundaries. “Borders are mostly new meeting places of discovery. Cooking terroirs are not on maps; they are in our hearts, in our memories and in our experiences.”

See below to watch Colagreco's presentation in full.

Now read what Brazilian chef Manoella Buffara of Manu said at #50BestTalks: Beyond Frontiers and how Dan Barber intends to revolutionise agriculture through seeds.