The city-state of Singapore was in the crosshairs of the culinary world between 23rd and 26th June, when the chefs of The World’s 50 Best Restaurants, industry VIPs and media gathered to celebrate with a series of world-beating gastronomic events and the unveiling of the new list, sponsored by S.Pellegrino and Acqua Panna. Catch up on the proceedings with our highlight reel. 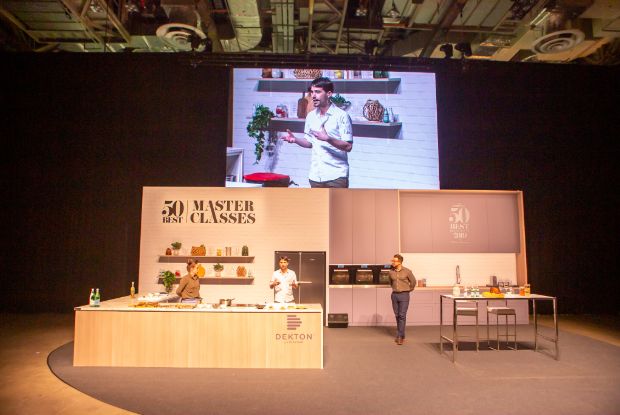 The week of festivities kicked off with an educative but entertaining tone: three 50 Best Masterclasses on Sunday, 23rd June, where renowned chefs Rasmus Kofoed of Geranium, Virgilio Martínez and Pía León of Central and Gaggan Anand of Gaggan shared unique insights into their philosophies and style of food. The Masterclasses provided a unique chance for foodies from Singapore and beyond to discover what happens behind the scenes at some of the best restaurants in the world and how their signature dishes are created.

The programme of events wouldn’t be complete without #50BestTalks, presented by Miele. 50 Best’s thought-leadership series shines a spotlight on current trends and issues in the culinary world. This year’s edition (which was open to the public and the best-attended Talks ever) featured chefs Massimo Bottura of Osteria Francescana, Daniela Soto-Innes of Cosme, Eric Ripert of Le Bernardin, Ana Roš of Hiša Franko and Tetsuya Wakuda of Waku Ghin. The cooks discussed how kitchens are becoming a more relaxed environment where anger is replaced by a focus on the team as they shared their own experiences and tips on how to lead a happy brigade and channel positivity into the dining room.

3. The World’s 50 Best Restaurants press conference set out the path ahead 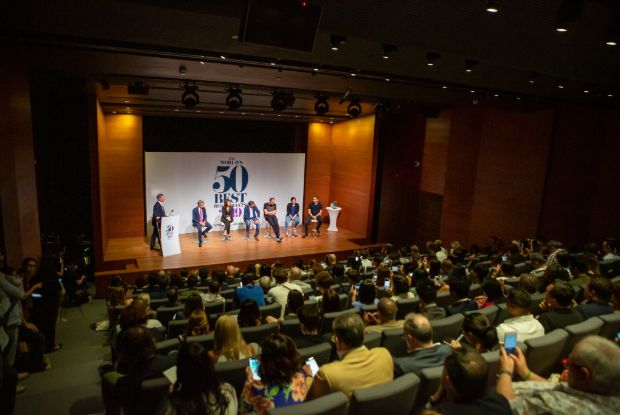 On Monday, 24th June, a special press conference took place at the National Gallery Singapore hosted by The World’s 50 Best Restaurants organisation and Singapore Tourism Board. Speakers included Joan Roca of El Celler de Can Roca, Daniel Humm of Eleven Madison Park, Garima Arora of Gaa and Julien Royer of Odette. The chefs discussed the changes introduced to the voting in 2019, such as the institution of the Best of the Best category, as well as the rising importance of Asia as a gastronomic destination. 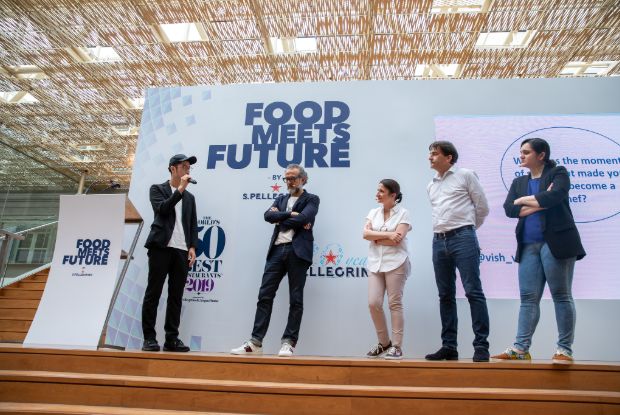 To celebrate the 120th anniversary of The World’s 50 Best Restaurants’ main sponsor, S.Pellegrino, a unique event followed the press conference at the National Gallery Singapore. Exploring four themes that are central to the future of food – talent, responsibility, inclusivity and inspiration – the event saw world-class chefs engaging with the new generations and pledging to take practical measures to create a better world. The event involved Massimo Bottura of Osteria Francescana, Anne-Sophie Pic of her eponymous Valence restaurant, Yannick Alléno of Pavillon Ledoyen, Garima Arora of Gaa and the American Express Icon Award winner José Andrés. Chefs from the 50 Best list also had the opportunity to make individual pledges in a bid to bring about positive change for the future and they jumped at the chance. 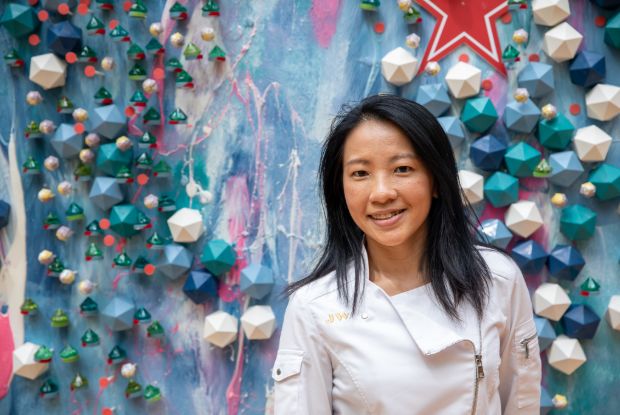 Asia’s Best Pastry Chef Award alumnus Janice Wong, who earned the accolade in both 2013 and 2014, showcased how food can be an inspiration for various forms of art by building six unique edible walls at the National Gallery Singapore. Featuring various bite-sized elements including chocolate, jelly and sugar, Wong created special flavours that reflected the different tastes and influences of Singapore. More than style over substance, it tasted fantastic, too.

The annual party for the chefs of The World’s 50 Best Restaurants this year took place at Tanjong Beach Club, where cooks from all over the world reunited to catch up, enjoy incredible food and drinks and dance under the stars on the beach. In the photo, Latin American chefs Virgilio Martínez and Pía León of Central, Jorge Vallejo of Quintonil, Leo Espinosa of Leo and Mitsuharu Tsumura of Maido enjoy the festivities.


7. Singapore’s hawkers made the menu 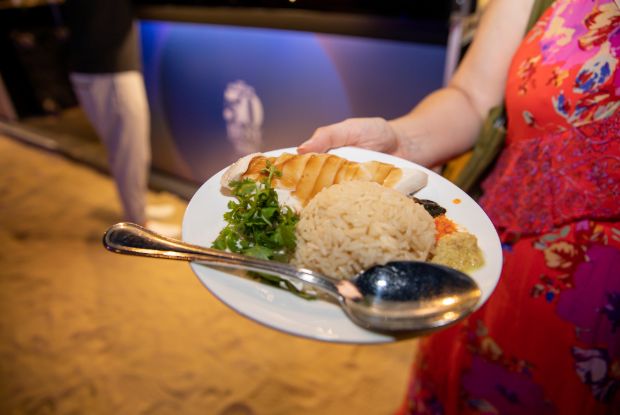 To keep the party well fed, 50 Best curated a selection of Singapore’s best hawker stalls who left their pitch for one night only to offer their wares to chef peers from all over the globe. Hawkers – the historic traders that sell the city’s most famous street food – included Tian Tian Hainanese Chicken Rice, Mr Mohgan’s Super Crispy Roti Prata and Ah Tan Fried Chicken Wings.

8. Italians united at the party 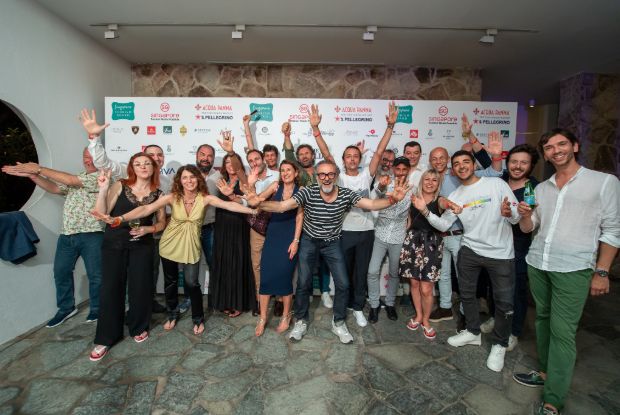 Italy was well-represented at the Chefs’ Feast, and the cooks couldn’t miss the opportunity to take a unique photo together. Spot in the photo Raffaele Alajmo of Le Calandre, Asia’s Best Pastry Chef Fabrizio Fiorani, Massimo Bottura of Osteria Francescana, Enrico Crippa of Piazza Duomo, Luca Fantin of Il Ristorante Luca Fantin, Filippo Uliassi of Uliassi, and the Camanini brothers of Lido 84.

9. …which ended with a bang 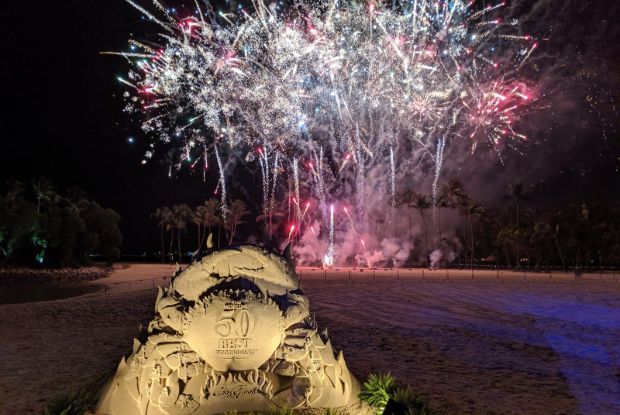 To conclude the Chefs’ Feast, the guests enjoyed a surprise show of fireworks from the beach under the night stars. 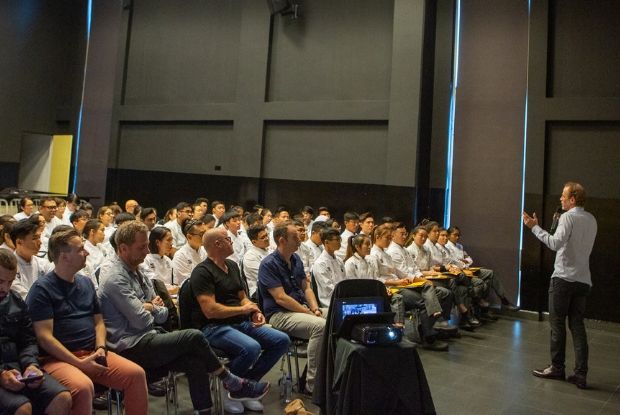 On Tuesday, 25th June, 50 Best reunited a host of international culinary stars to speak to the students of Singaporean cooking school At-Sunrice. Dan Barber of Blue Hill at Stone Barns, Vladimir Mukhin of White Rabbit, Tim Raue of Restaurant Tim Raue and Luke Dale-Roberts of The Test Kitchen shared their pearls of experience with the students and judged a cooking competition for four lucky teams of the school’s highest achievers. The event was topped off with a surprise cameo appearance from a certain Mr Heston Blumenthal, much to the students’ delight.

11. Spanish pride on the red carpet 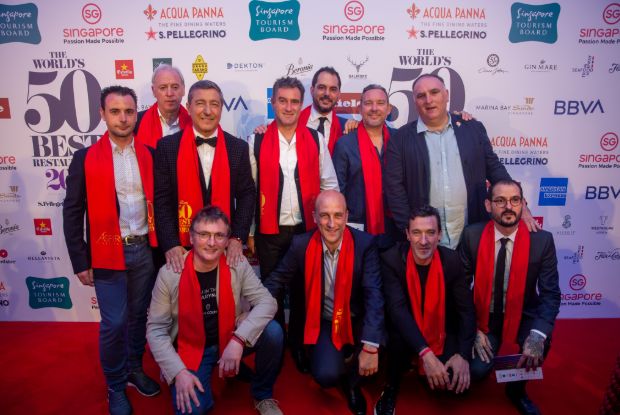 12. The Best of the Best spoke out 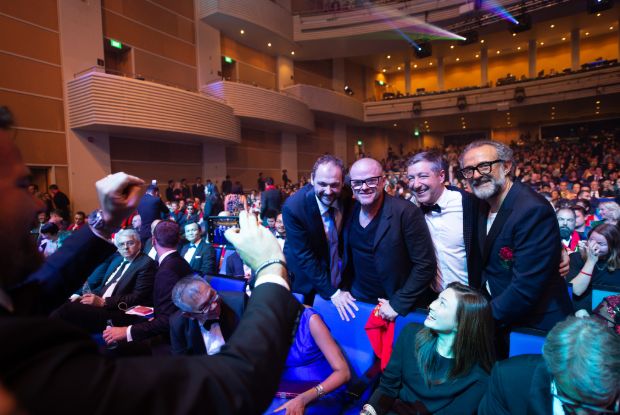 The creation of the new Best of the Best category, which includes all the restaurants that have topped The World’s 50 Best Restaurants list since its inception, was formalised at this year’s awards ceremony. To discover more about these restaurants, which are no longer eligible to be voted on the list, head to the Best of the Best section on the website. In this photo, Daniel Humm of Eleven Madison Park, Heston Blumenthal of The Fat Duck, Joan Roca of El Celler de Can Roca and Massimo Bottura of Osteria Francescana get together for a picture before the ceremony. 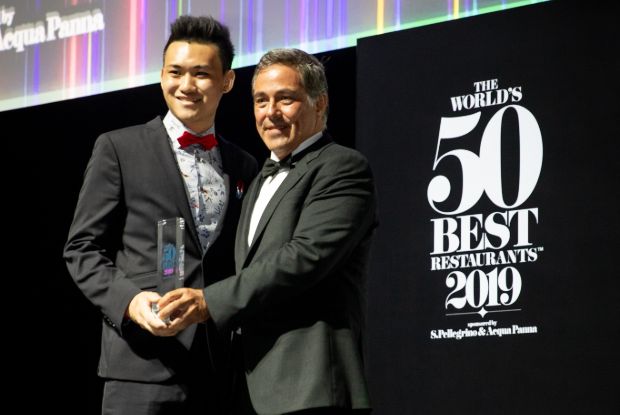 Canadian cook Andersen Lee, the winner of the 50 Best BBVA Scholarship 2019 – an initiative that helps young talented cooks to train in some of the most famous kitchens in the world – accepted his prize on stage. Lee will soon start staging at Odette in Singapore, before he moves to Core by Clare Smyth in London, UK, and finally to Quintonil in Mexico City, Mexico. 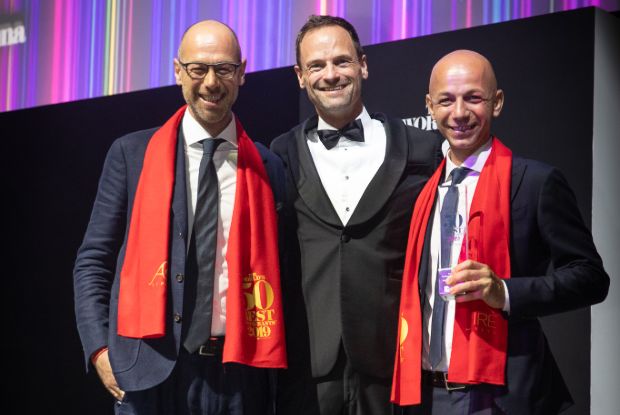 Brothers Riccardo and Giancarlo Camanini of Lido 84 in Gardone Riviera, Italy, collected the Miele One To Watch Award for their restaurant, which was selected by the 50 Best organisation as a rising star of global gastronomy.

15. The Sustainable Restaurant Award went to a Swiss castle 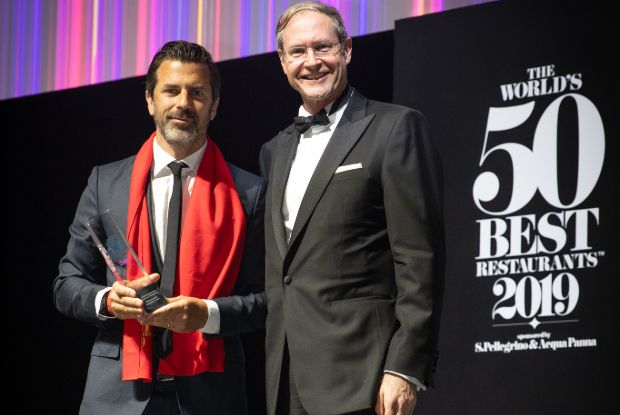 This year’s Sustainable Restaurant Award, which is adjudicated by 50 Best’s partner Food Made Good Global, was awarded to Schloss Schauenstein in Fürstenau, Switzerland, for their varied initiatives to protect the environment, value natural resources and give back to the community. Chef Andreas Caminada picked up the trophy. 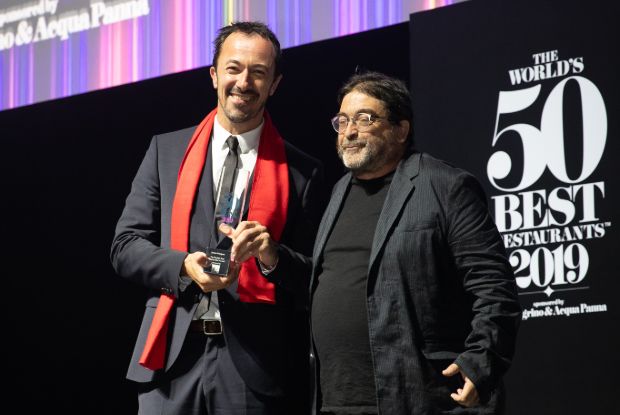 The winner of The World’s Best Pastry Chef Award, sponsored by Sosa, was Jessica Préalpato of Alain Ducasse au Plaza Athénée in Paris, France. She accepted her prize via video, as she couldn’t attend the ceremony due to impending motherhood. The restaurant’s chef de cuisine Romain Meder collected the award on stage on her behalf. 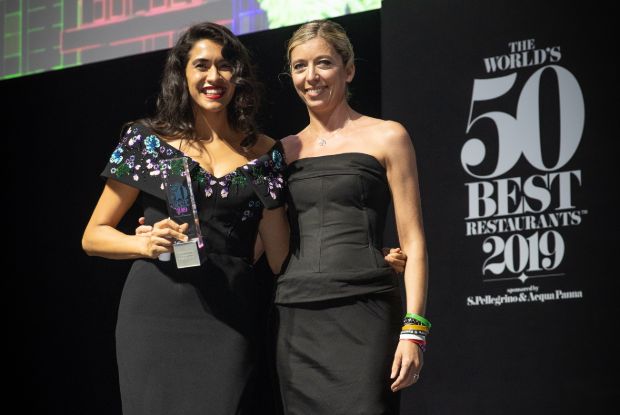 Daniela Soto-Innes of Cosme in New York, USA, accepted the award as The World’s Best Female Chef 2019 and gave a rousing speech on the importance of following your dreams, regardless of your background, gender or race. “Not only does happiness matters, but we can spread it. Not only do dreams matter, but we can make them come true,” said Soto-Innes to rapturous applause from the floor.

18. The Chefs’ Choice Award went to a French icon 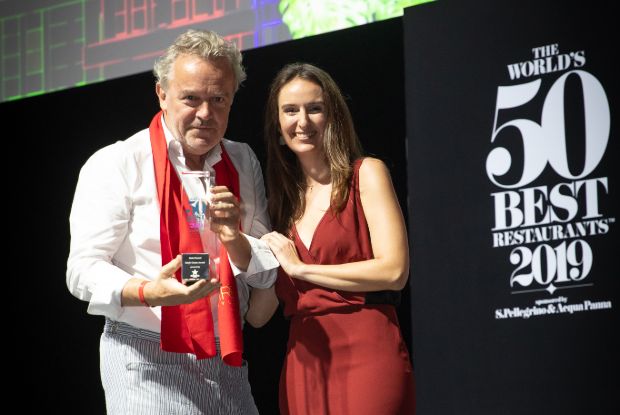 The Chefs’ Choice Award, sponsored by Estrella Damm, the only accolade that is voted for by the chefs in The World’s 50 Best Restaurants list, went to chef Alain Passard of Arpège in Paris, France. One of the icons of the modern culinary world, Passard has remained at the top of global gastronomy for over two decades and was among the first to promote a new style of vegetable-forward cuisine. 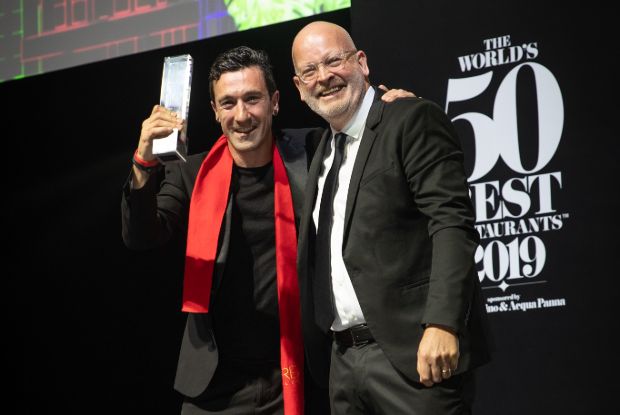 The winner of the Westholme Highest Climber Award 2019 was Azurmendi in Larrabetzu, Spain, which leapt a meteoric 29 positions up the list since 2018. Chef Eneko Atxa jumped on stage to pick up his restaurant’s prize

20. The Art of Hospitality Award went to a Japanese master 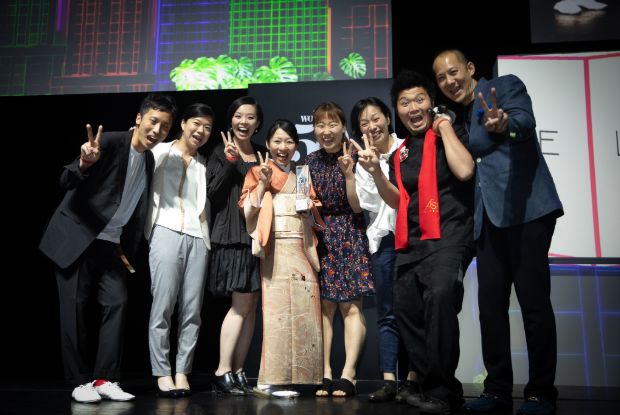 Celebrating an essential part of every restaurant – the service – the 2019 Art of Hospitality Award, sponsored by Legle, was granted to Tokyo-based restaurant Den, which has long been recognised for its warm and personal interpretation of traditional Japanese cuisine. Chef Zaiyu Hasegawa brought his team on stage to accept the deserved plaudits.

21. The American Express Icon Award was presented to a man whose reach extends beyond the pass 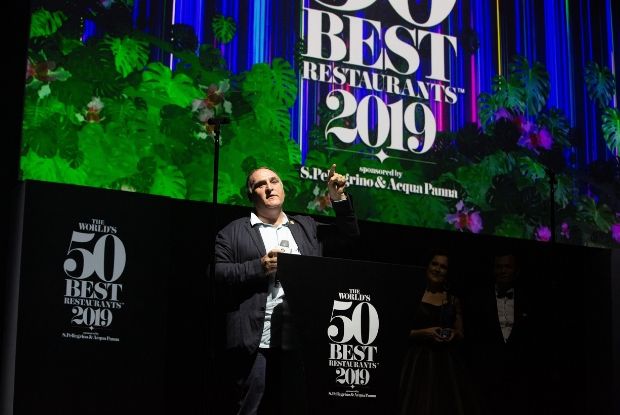 Spanish chef and humanitarian José Andrés, who has gained the world’s respect thanks to his charitable efforts all over the world via World Central Kitchen, accepted his American Express Icon Award on stage. Andrés gave an inspirational address in which he recognised the efforts of the women all over the world who are feeding the planet and encouraged his peers do their part to better nourish the population. 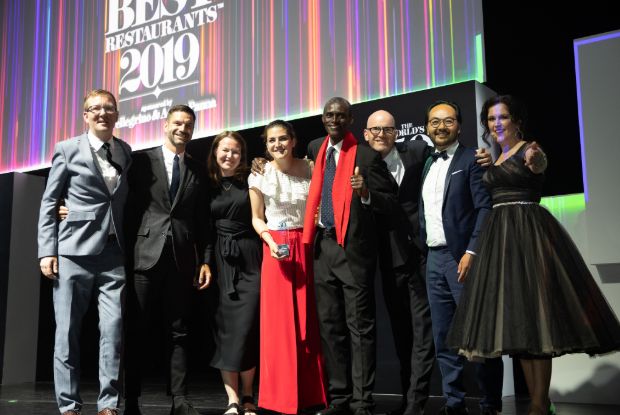 Debuting at No.2, the new incarnation of Copenhagen restaurant Noma made its first appearance on the list with a bang. Chef René Redzepi’s team collected the Highest New Entry Award for the reinvented version of the restaurant, which features a new location, new menu and new culinary concept.

23. The World’s Best Restaurant 2019 went to France for the first time 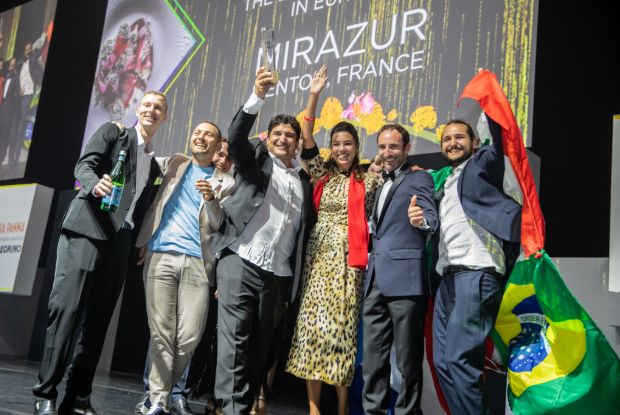 The ultimate culinary accolade, the prize for The World’s Best Restaurant 2019, sponsored by S.Pellegrino and Acqua Panna, went to restaurant Mirazur in Menton, France. Marking the first time that a France-based restaurant has topped the list, chef Mauro Colagreco and his team celebrated their restaurant’s international character and unique combination of culinary influences by bringing on stage four flags and spreading a message of unity across borders. We’re told their party went on long into the following morning…

24. Guests let their hair down for the after party at Marquee 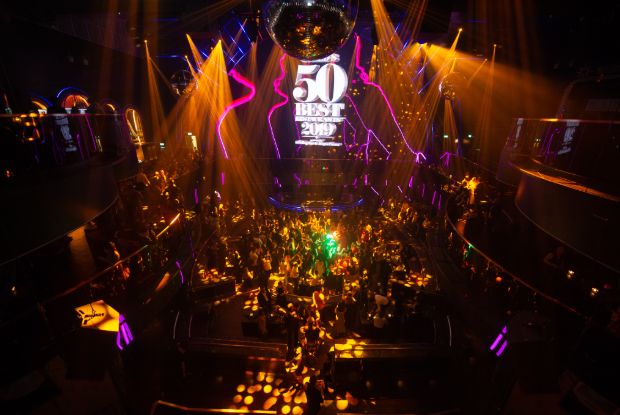 Following the unveiling of the new list, the chefs and guests of The World’s 50 Best Restaurants 2019 headed to Marquee at Marina Bay Sands for the post-awards festivities. The party featured glowing 50 Best tattoos, Singaporean drummers, cocktails mixed by some of the world's greatest bartenders and plenty of chefs showcasing some pretty impressive dance moves. 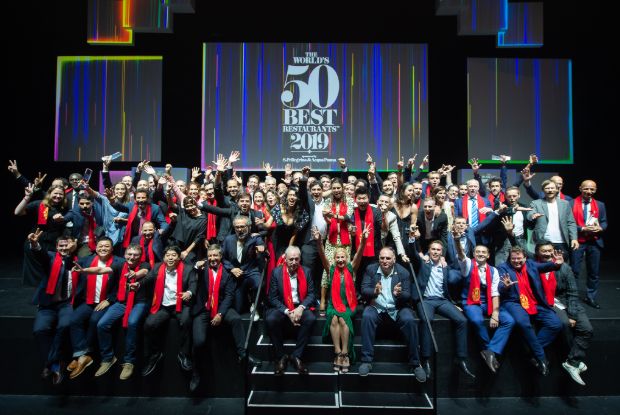 Once again, The World’s 50 Best Restaurants brought together the planet’s most acclaimed cooks for a week of celebrations of the global restaurant industry’s achievements. Stay tuned for the announcement of next year’s host city, which will be made soon.