When chef Jorge Vallejo opened his restaurant Quintonil in Mexico City in 2012, he didn’t only help start a global wave of positive recognition for Mexican cuisine, but also rooted his concept in fresh local products and ancient culinary traditions, making it timeless. Ten years on, the restaurant is firmly established as one of the world’s unmissable culinary experiences, most recently achieving the No.9 position in The World’s 50 Best Restaurants 2022.

To celebrate Vallejo being voted by his peers as the winner of the Estrella Damm Chefs’ Choice Award 2022, 50 Best travels back in time to discover the six dishes that left a lasting impression on him, while also learning about the chef’s life, philosophy and career

Born in the Mexican capital in 1981, Vallejo began showing his love for food when he was a child. “My favourite dish, the one that makes me happiest to eat, is roast chicken,” he says. “I remember the roast chicken from the Pollos Río rotisserie in the neighbourhood where I grew up – it brings back a lot of memories because it was what I ate on a weekend with my parents.

“For my eighth birthday, I asked my dad for a whole rotisserie chicken just for me. When we ate it as a family, since I was the youngest in the house, what I got was the leg and the wings. I hated the leg – what I liked the most was the breast and the thigh! So I asked for a whole roast chicken from Pollos Rio and a lemon pie as my birthday present.” The dish later became a Vallejo family staple and in 2019 the chef shared with 50 Best the recipe for his homemade chicken casserole – discover it here. 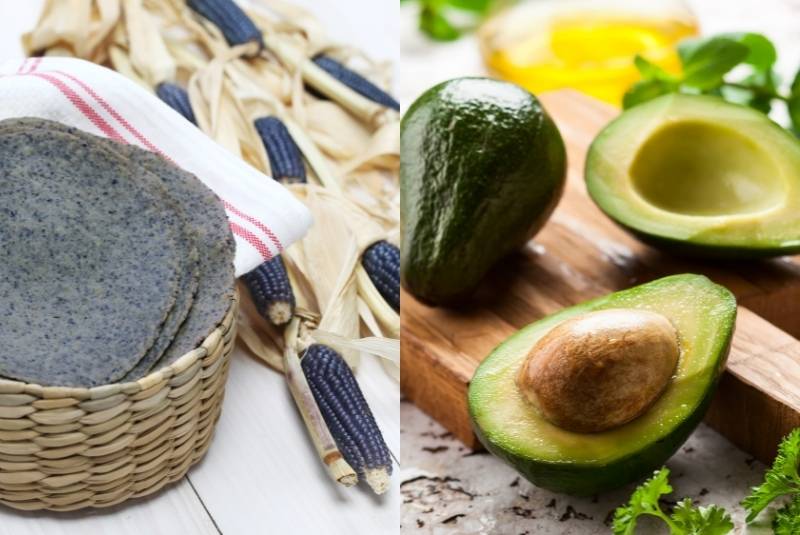 “This dish influenced me in the way I understood and ate Mexican food,” says Vallejo of the next bite, which he tasted just before he decided to study gastronomy at the Culinary Center of Mexico. “I only ate avocado tacos at my grandmother's house, I don't know why, but that’s how it was. They were super-good blue tortillas and creamy avocados that she bought at the market near her house in Coyoacán.

“Nothing else was necessary. All she did was lightly char the tortilla on the open fire of the stove, so it would be burnt and toasted – which was how I liked it – then add the avocado and a little salt. It was the most sophisticated and minimalist, but also the most delicious taco you could ever eat in your life.”

Vallejo credits his grandmother for infecting him with a passion for cooking for his loved ones and ultimately for inspiring him to become a chef. Mexico’s ubiquitous blue tortillas, made from an ancient variety of blue corn, are a pillar of the country’s traditional cooking and the chef later recognised avocados as one of the nation’s best ingredients, building a signature Quintonil dish around it (see number 5) – showing how early food memories can play a key role in a chef’s professional development.

The year before he decided to strike out on his own with his now-wife Alejandra Flores, whom he met while working at Pujol, Vallejo visited Alinea in Chicago. “Another bite that marked mine and Ale’s life was a Grant Achatz dish of hamachi [Japanese amberjack fish] and banana,” he recalls. The year was 2011, when Alinea had burst onto the culinary scene and diners were flocking to Chicago to taste Achatz’s artistic and hyper-creative dishes – the restaurant placed No.6 in The World’s 50 Best Restaurants that year.

“When we ate that bite, we just stared at each other and agreed that it was crazy. It was something completely new to us: the way it was presented, the texture, the temperature. Even now when we talk about what our best dining experiences have been, we remember that first time at Alinea.” 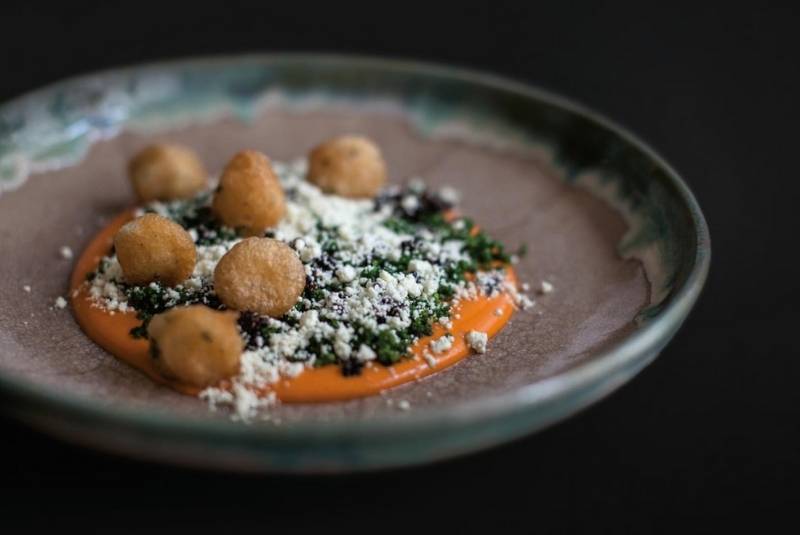 Inspired by their experiences dining around the world, Vallejo and Flores opened the doors of Quintonil in 2012 – the chef calls the restaurant their ‘project of a lifetime’. They named the eatery after a Mexican herb: quintonil is the ancient Aztec name given in Náhuatl language to the edible part of the amaranth plant. Then, they set to work creating a tasting menu that celebrated Mexican flavours and market-fresh ingredients. “A dish that definitely not only marked my life, but Quintonil's as well and that has also been one to return to the restaurant continuously is the huauzontles,” he begins.

“It was one of the first dishes we created at the restaurant. Besides the fact that it brings back a lot of memories and that the customers like it very much, it portrays well the essence of Quintonil. We use the ordinary products of our gastronomy and recipes that were traditionally made at home, especially in the case of such a Mexican ingredient as huauzontles, another herb in the amaranth family. We cook it in an herbal tea and we make a tomato sauce with habanero chilli and queso de cuadro from Chiapas, a semi-aged heavy cream cheese that melts very well in the sauce.” The result is an eye-catching, delicately layered dish that remains ever popular at the restaurant today. 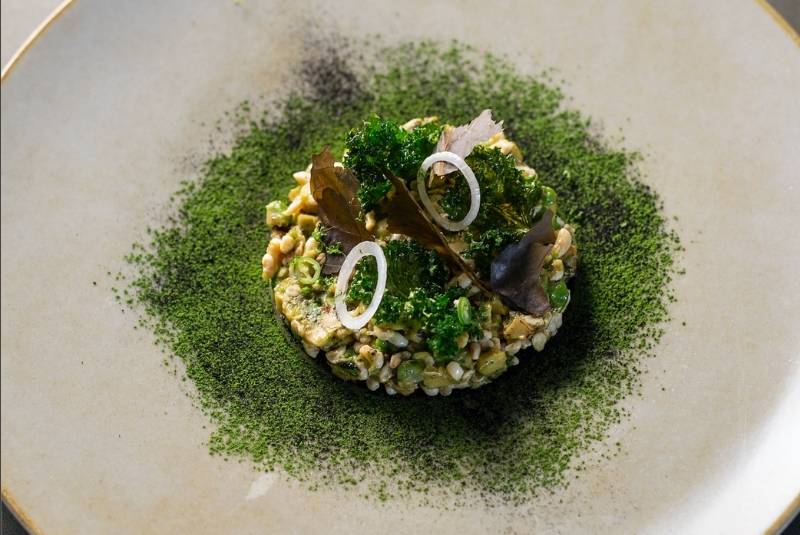 Vallejo came to recognise quelites – another Náhuatl-descended word that means edible plant and has come to define traditional Mexican cooking herbs – as the family of ingredients that gives personality to his country’s gastronomy. Today, Quintonil’s tasting menu features several of these herbs, including the likes of epazote, hoja santa, cilantro, pitiona and hierba de conejo. These are coupled with classic Mexican ingredients such as escamoles, ant larvae. “This next dish is very important to me because it has become emblematic at Quintonil,” he says.

“Besides featuring ingredients that we protect and like so much, such as avocado, quelites or escamoles, it is also a challenge for foreign palates, since they are often not used to eating ants, although here in Mexico they are considered a delicacy (because they are). This dish doesn’t exist as such in the recipe book of our territory, but it represents a total Mexican experience for the diner.” In Vallejo’s recipe, the avocado is lightly charred, then mixed with ant larvae sautéed in brown butter with garlic, chilli and epazote – the chef calls it the restaurant’s own version of guacamole. 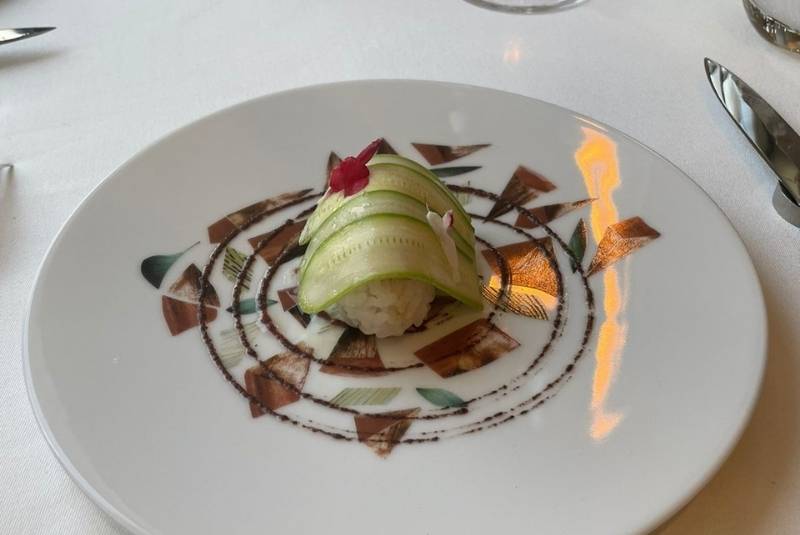 In July 2022, Vallejo travelled to London to attend The World’s 50 Best Restaurants awards ceremony, where his fellow chef Joan Roca of Best of the Best restaurant El Celler de Can Roca presented him on stage with the Estrella Damm Chefs’ Choice Award. While in Europe, the Mexican chef took the chance to visit Alain Passard’s restaurant in Paris, Arpège, where he tasted the latest dish to make this collection.

“Another memorable dish was just earlier this year in France, one of Passard's great classics: vegetable sushi. I had tried it once with beet, but this year it was unforgettable – a nigiri with koshihikari rice and a spectacular fig leaf oil and zucchini on top. It was brutal; an explosion of flavour. I like dishes with a combination of forcefulness and minimalism and this one was delicious: the perfect temperature, the exact amount of rice, the ideal vegetables… One of the greatest dishes I have ever eaten in my life.”

As the chef’s gastronomic adventures continue in the coming years, Quintonil is sure to carry on growing and developing apace, further promoting Mexican culture and securing its own place among the culinary world’s sweethearts.

Find out more about the winner of the Estrella Damm Chefs' Choice Award, Jorge Vallejo: