Discover the sensational line-up for #50BestTalks: Beyond Frontiers in Paris in September

After its best-attended edition ever in Singapore in June, 50 Best’s thought-leadership event series #50BestTalks, presented by Miele, moves to Paris, France, on 16th September. Mauro Colagreco of No.1 restaurant Mirazur will be joined by a host of renowned chefs to discuss how cuisine crosses borders and debate the future of French gastronomy

In a world increasingly marked by social and cultural division, the global gastronomic community has been on a mission to show how cuisine can help build bridges and blur boundaries between countries and continents. Providing a platform for the world’s finest chefs and restaurateurs to push for social change, the new edition of #50BestTalks, presented by Miele, will see acclaimed international chefs voice their opinions around the theme of “Beyond Frontiers”. The occasion will mark 50 Best’s first official event in France, held in Paris at the Musée du Quai Branly Jacques Chirac on Monday, 16th September.

The stellar line-up for #50BestTalks: Beyond Frontiers includes Mauro Colagreco of Mirazur in Menton, France, No.1 in The World’s 50 Best Restaurants 2019; Manu Buffara of Manu in Curitiba, Brazil, winner of the Miele One To Watch Award at Latin America’s 50 Best Restaurants 2018; and Dan Barber of Blue Hill at Stone Barns in Pocantico Hills, USA, winner of the Chefs’ Choice Award 2018, sponsored by Estrella Damm. The keynote speakers will lead a series of thought-provoking presentations highlighting the universal language of food.

A chef who has forged his cooking style based on his own multi-cultural experience, Colagreco will reflect on the countries that have influenced him, including France, where he trained with some of the nation’s best chefs. He will highlight the importance of looking to a restaurant’s setting for inspiration, while sharing the message that cuisine can bring people together regardless of nationality, language or heritage. His ethos certainly worked for Mirazur, which won the title of The World’s Best Restaurant 2019, sponsored by S.Pellegrino & Acqua Panna. 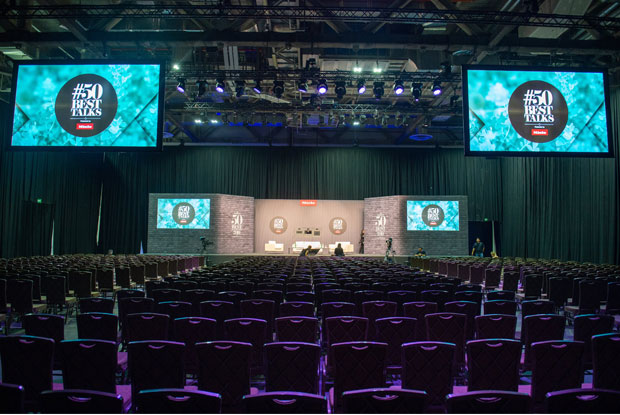 The set for #50BestTalks at Marina Bay Sands in Singapore

Brazilian chef Buffara – a proponent of an organic approach to cuisine that sees farming, foraging and cooking all seamlessly integrated – will take to the stage to discuss how sustenance farming has informed her approach and how it fits into global discussions around sustainability. Finally, Blue Hill at Stone Barns’ cook Barber, who with his company Row 7 Seed is revolutionising farming with seeds specifically designed for flavour, will outline how working in unison with nature can help build a better future beyond all borders.

Barber will also discuss how his French culinary training has impacted the way he views and works with ingredients, leading into a panel discussion with a host of renowned French chefs who will assess the relevance and debate the future their country’s cuisine. The session, moderated by broadcaster and food lover Eric Brunet, will feature Yannick Alléno of Alléno Paris au Pavillon Ledoyen, Alain Passard of Arpège, Romain Meder of Alain Ducasse au Plaza Athénée and Bertrand Grébaut of Septime, as well as Colagreco.

To conclude the #50BestTalks: Beyond Frontiers event, guests will enjoy a gastronomic lunch created by a choice group of Paris’s most talented male and female chefs. Adeline Grattard from restaurant Yam’Tcha; Guillaume Sanchez from Ne/So; Chiho Kanzaki and Marcelo di Giacomo from Virtus; and pastry chefs Yann Couvreur from Pâtisserie Yann Couvreur and Moko Hirayama from Mokonuts Paris have been tasked with designing bespoke dishes for the event that highlight the creativity and innovation at play today in the restaurants of the French capital. It will be an event not to be missed.

Stay tuned for more information on the speakers and topics that will be discussed at #50BestTalks: Beyond Frontiers. Meanwhile, catch up on the highlights from #50BestTalks in Singapore: