Jesús Escalera is the young and talented chef behind dessert-only restaurant La Postrería in Guadalajara, Mexico, who was recently crowned Latin America’s Best Pastry Chef 2018, sponsored by República del Cacao. We find out why he wants to spread “sweet culture” to the world, plus the secrets behind the unusual flavour combinations in his desserts.

Jesús Escalera, the 32-year-old award-winning chef behind La Postrería restaurant in Mexico, is the force behind a new trend in the pastry world – although he prefers to call it the ‘sweet world’ or ‘dessert world’, as the word ‘pastry’ is too narrow for the task he has undertaken. At his restaurant in Guadalajara, Escalera serves two tasting menus – one of six and one of 10 courses – both of which are made exclusively of desserts, featuring savoury ingredients from cilantro to olives.

The chef, who has been trying to change conceptions around desserts since he opened his restaurant in 2013, says that being voted as Latin America’s Best Pastry Chef, sponsored by República del Cacao, was as surprising as it was fulfilling. “I still cannot really believe it,” says the chef. “It’s a dream. In the past, this award has been given to some of my mentors, such as Albert Adrià, Jordi Roca and Gustavo Saez, whom I all admire very much. To receive it this year leaves me speechless. I feel very proud.”

Well-placed to influence a new generation of pastry chefs with this platform, Spain-born Escalera is adamant that things are about to change in the pastry world. “In just a few years, there will be a sweet revolution, the same way that there was a revolution in the savoury world a few years ago,” he says. The concept behind this watershed moment in the dessert scene revolves around what Escalera calls ‘the cultural savoury world’. 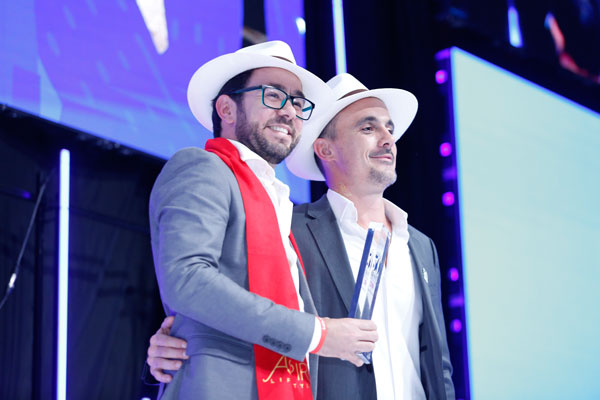 “People think that pepper is savoury and that cinnamon is sweet, both of which are wrong,” he says. “For example, cinnamon is bitter. When you start breaking these simple rules, a big stage opens up. Beet, celery, fennel, all of these are sweet ingredients. In Mexico, people think that cilantro is only for tacos. But if you taste it, cilantro has an aniseed flavour, which goes very well with pineapple or honey.”

It was by breaking down the boundaries between the savoury and sweet worlds that Escalera got to where he is now. Looking further than the cultural conceptions around ingredients, he focused on creating flavour combinations that surprise and delight diners, whether they like sugar or not.

“My father doesn’t eat dessert,” he says. “For dessert, he wants an espresso, and coffee is bitter. So why don’t we make a bitter dessert? Other people prefer to have a cheese board for dessert, which has creamy and savoury notes. So that’s what we play with – always with sweet touches, but also with more acidic, bitter, spicy or savoury flavours. I’m not creating anything new, only looking for the logic behind flavours.”

Escalera’s love for blurring the boundaries between food worlds may come from his own education – when he originally started cooking, he wanted to become a head chef, although he says that life seemed to always take him towards pastry chef roles. Originally from Utrera, a city near Seville in southern Spain, Escalera began his career at the age of 14 working at a bakery, but he only started falling in love with the sweet world at the age of 19, when he did a stage at the hotel Hacienda Benazuza, whose gastronomic offer was overseen by legendary Spanish chef Ferran Adrià.

“When I started, I hated pastry,” he says. “I was convinced that pastry was something exact, precise to the millimetre, that if you put two extra grams of something, it wouldn’t work. That suffocated me. I liked to be more intuitive, like in the kitchen.” 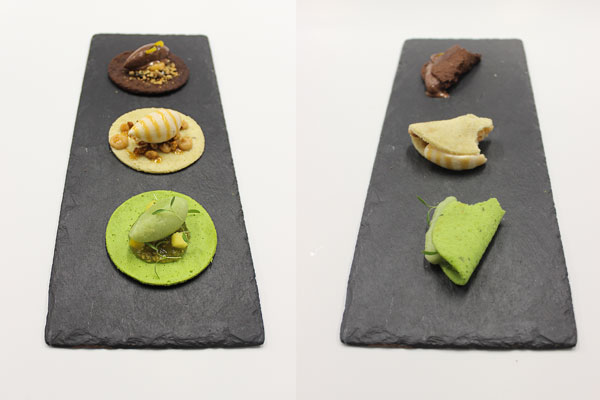 When he started at Hacienda Benazuza – which later became El Bulli Hotel under Adrià – Escalera wanted to move away from his experience in pastry roles. But, as nervous teenager, he was taken aback when the head chef asked him if he wanted to work in the savoury or the pastry kitchen, and ended up once again as a pastry chef. “There, I started making plated desserts. That was what completely changed my idea of sweet cuisine. It’s not that exact – you do have to be consistent, but if you know the ingredients, you can change whatever you want.”

As well as his experience at El Bulli Hotel, where he had a chance to learn from Adriá’s award-winning pastry chef brother, Albert Adriá, Escalera also had the chance to work alongside some of his other idols, such as Jordi Roca of El Celler de Can Roca in Girona, Spain, and Heston Blumenthal of The Fat Duck in Bray, UK.

“When I started in pastry, I would ask my line chef: why is it done like this? But they would just say that it was the recipe and that was the way it was done. Because I couldn’t understand, I wanted to learn more. When I met Albert and Jordi, they didn’t hold anything back. They told you everything. That’s the difference,” he says.

In 2011, while he was working at The Fat Duck, Escalera received a call from his former head chef at Hacienda Benazuza, who offered him the role of head chef at a new property the company was opening in Cancun, Mexico. In charge of the tasting menu for the new restaurant, Escalera started experimenting with different ratios of sweet and savoury dishes.

“It got to a point where the 20-course menu was made of 10 savoury and 10 sweet dishes,” he says. “I noticed that people liked that. They liked that transition where you didn’t really know what kind of dish you were having.” 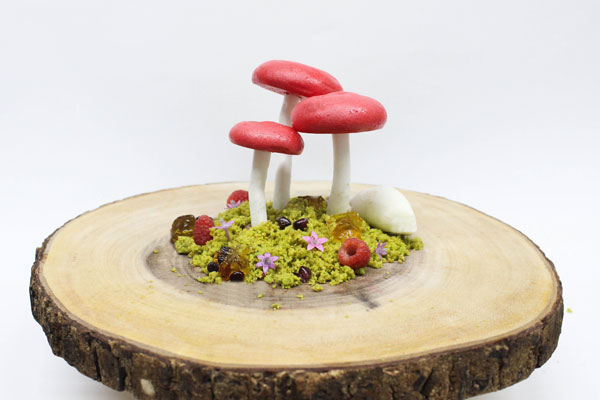 That was how Escalera and his soon-to-be business partner, Mexican chef Fernanda Covarrubias, started playing with the idea of opening a dessert-only restaurant. “We kept saying: can you imagine a restaurant where the dessert is not bound to the tasting menu?” he says. In 2013, tired of the 20-hour working days and tight schedules that his restaurant jobs imposed on them, Escalera and Covarrubias opened La Postrería as a café serving some plated desserts.

“We wanted to bring something new to the scene and we wanted people to understand that a dessert can be so much more than what we’re used to,” he says. As it grew more popular, the café developed a full dessert menu, which eventually evolved into the tasting menus that make it unique today.

When he is creating a new dessert, Escalera says he always starts from the flavours. Often, in his search for new combinations, he is inspired by nature. “We ask ourselves: what does the forest taste like? Berries and herbs, then there is the fresh air, like eucalyptus or pine trees. That’s how we start. What about a Mexican agave landscape? It’s tequila, agave syrup… You drink tequila with lemon, but we can change that for a different citrus and use yuzu. Then, we apply our techniques, which help us get different textures, which in turn help with the look of the dish,” he says.

At La Postrería, the menus change seasonally to ensure that the team of chefs can work with the best and freshest ingredients, especially fruit and vegetables. However, there is one dessert that has been on the menu since the restaurant opened: Flor de Vainilla (vanilla flower). Escalera considers this a dish that is particularly symbolic of his approach to sweet cuisine. 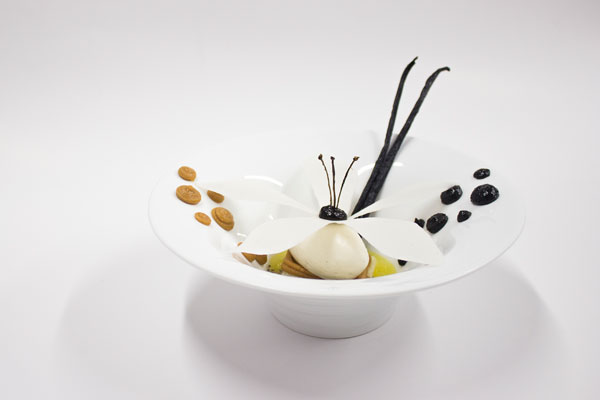 “We’re in Mexico, so in its presentation, the dessert represents a vanilla orchid. But as a dessert, there is very little vanilla in it – only a vanilla ice cream. People think it’s a weird combination: the vanilla goes with whisky, black olives and caramel. They think it cannot taste good. But when they try it, they say: ‘I cannot believe that this combination tastes so much like vanilla’. So you start from a flavour, or a product, and you enhance it with other products that have similar aromas,” he says.

Although his accent still betrays him a Spanish national, Escalera is fully in love with Mexico – and he thinks that Latin America is a powerhouse for pastry chefs. “If you take away Latin America from the pastry world, you are left without vanilla, chocolate, coffee, lots of fruits… The whole recipe book behind French and Swiss pastry falls apart. It’s time for Latin America to raise its flag. Here we have some of the best pastry chefs in the world,” he says.

Escalera has noticed that the sweet world revolution is already under way. At La Postrería, he receives over 700 requests for stages per year, and he is happy to see more young chefs getting into pastry and more restaurants giving the dessert the respect it deserves. However, his mission stands unchanged.

“We want to focus on making sweet culture. We want the public to understand that a plated dessert is not something fancy that only belongs in a fine dining restaurant. It can be something available for everyone to enjoy.”

Watch the moment when Escalera received the award at Latin America's 50 Best Restaurants 2018 and the video interview with the chef: