50 Best Explores is back and heading to Georgia

Ready to uncover some of the oldest wine-making and food traditions in the world? 50 Best Explores is travelling to Georgia, the country ensconced by the Caucasus mountains and wrapped up in some of the most ancient gastronomic traditions on Earth. Discover the chefs and sommeliers packing their bags for this epic location

50 Best will be sending four teams – each including chefs and sommeliers from establishments on The World's 50 Best Restaurants list – on four routes to four different parts of Georgia to explore the country's food, drink, culture and landscape. In the process, 50 Best will create a series of films to be aired in July, shining a spotlight on the little-known traditions that influence much of what we see in restaurants today. Starting here, 50 Best Explores Georgia...

Saddle up for the first leg as two of the world’s eminent authorities in cuisine and wine head due east from Tbilisi, Georgia’s capital city, to Kakheti, the principal wine region that plays host to 4,250sq km of vines. This region produces half of the country’s vinous stock and it's believed Kakheti has the oldest uninterrupted wine-producing history in the world. Monasteries date back 1,500 years, where unique grape styles such as rkatsiteli, mtsvane and saperavi hold sway over the more common varietals that we see on wine lists today. The wine here is characterised by deep, tannic reds and ethereal, floral whites that are gradually being reintroduced to the wider gastronomic world as supply chains become more sophisticated. The team will stop by the legendary Pheasant’s Tears winery and restaurant, owned by American John Wurdeman, who has been paramount in raising the profile of Georgian wine across the globe. 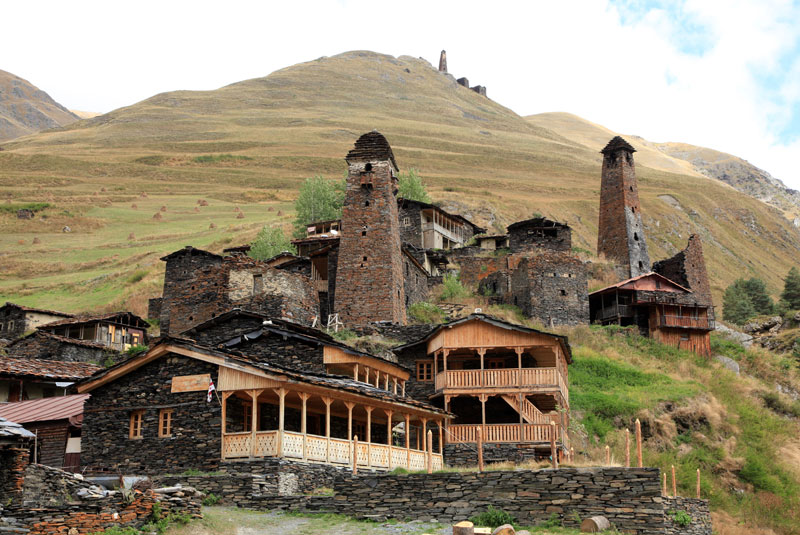 Switzerland's most lauded chef and his rising-star sommelier head to one of the most culturally diverse regions in Georgia, occupied by the Ottomans in the 16th century and with a population that is part Muslim and part Christian. Javakheti's cuisine draws influences from Turkey, Russia and north Africa and is home to a string of unique breads that you won’t find anywhere else in the world. Somini, kakala, ukhas and bazlama laven and un-laven bakes form the basis of every meal, often paired a mulberry-based jam with either sweet or savoury courses. This route sweeps along the vertiginous Samtskhe Pass, where grapes grow on the steep valley steps. With vines at up to 1,700m above sea level, this is one of the highest viticultural regions in the world, producing crisp, acidic whites and rich reds that hold characteristics similar to the more-familiar malbec grape, grown mainly in France and South America.

The epic mountain valley of the Samegrelo and Svaneti region – home to the legend of the Argonauts and the location thought to be where the historic Golden Fleece was stored – will play host to iconic San Fran chef Dominique Crenn alongside one of the world's most acclaimed sommelier-restaurateurs in Søren Ledet. This jaw-slackeningly beautiful province is also one of Georgia’s most remote, where gold prospectors settled in antiquity, enjoying the isolation afforded by the inaccessible mountains. Megrelian gastronomy is distinguished by its wide variety of dishes and strong contrast of flavour packed with heacy spice. The locals are so reliant on spice that the residents of Samegrelo attempted to fight malaria with the hot spices of Ajika for hundreds of years. The Svan culture here is remarkably preserved and home to unique traditions that have remained the same for hundreds of years. It is also home to the Svan polyphonic singing – a harrowing chant that reverberates through the mountains day and night. In ancient times, the Svan Supra (feast) was a symbol of peace and respect repeated across all Georgia. The feast would feature up to 50 toasts during a meal, charging rakhi (a local moonshine similar to vodka) long into the night. 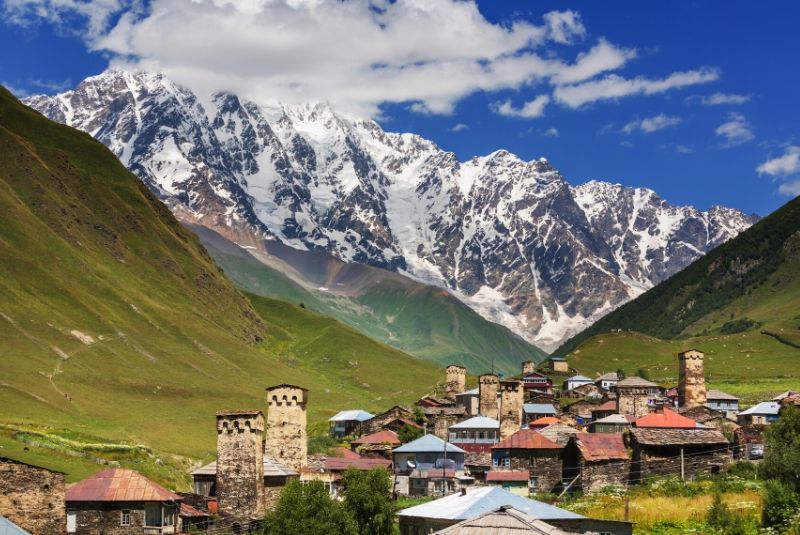 Svaneti in the spring time

The London-based duo will experience an ancient region that has been inhabited for at least three millennia and was a key staging post on the Silk Route from China. Set in one of the most mountainous areas of the country, Racha is lined by towering coniferous trees, where the southern slopes of the Great Caucasus mountain range divides Racha from Russia. The team will head to the diminutive village of Nakhshirghele, where some of the country’s finest wines are produced. Far out in the forest, they will discover the Baia family, where a group of six sisters are keeping the family’s wine-making tradition alive. Theirs is described as reverence for tradition bordering on ‘anarchic’, where this sisters' clay amphora pots buried in the ground used to produce the wine have a history dating back nearly as far as the country itself. Imereit is also home of the locally famous Imeretian khachapuri, a dish of thin pastry filled with cheese that is growing in popularity as street food from California to London.

To find out more about the 50 Best Explores series, see what happened when Daniela Soto-Innes visited Peru: