In the final instalment of our four-part mini-documentary series, 50 Best Explores Peru, Slovenian chef Ana Roš is given an insight into the culinary traditions and techniques of the region of Arequipa. Local chefs Pía León and Arlette Eulert lead her on a trip taking in canyons, earthen ovens and the traditional restaurants known as picanterías.

Chefs Ana Roš, Pía León and Arlette Eulert stand close to the vertiginous edge of the Colca Canyon, pointing at something in the sky. Relatively unknown outside of South America, the Colca Canyon in the southern Peruvian region of Arequipa is actually one of the deepest in the world, reaching nearly 3,500m with stunning views extending in all directions. Five Andean condors, with wingspans of up to 2.5m, circle above them, dipping low and suddenly shooting back up into the blue.

It is the first day of this 50 Best Explores Peru trip, and the three chefs are about to embark on a journey that will lead them to discover Arequipa’s unique scenery, gastronomy and culture.

“We saw so many condors flying that after a while, I felt all the pressure of my life going away,” says Roš, who was named The World’s Best Female Chef in 2017 and whose Slovenia restaurant Hiša Franko earned spot No.48 on The World’s 50 Best Restaurants 2018 list. “I came straight from working and I’m under a lot of pressure. When I felt this moment of freedom within nature, I thought that I should say a big thank you out loud.”

Even as a Peruvian, Kjolle chef-owner León – who won the title of elit™ Vodka Latin America’s Best Female Chef last year – is equally impressed by the region. “I hadn’t visited the Colca Valley before,” she says. “I knew it was beautiful, but my imagination didn’t travel so far. The landscape you have here, and the opportunity to see these majestic animals, is simply shocking. I want to come back.”

Not far from the canyon, nestled among the hills and gorges of the Colca Valley, a feast is being prepared for Roš, León and Eulert at the Belmond hotel Las Casitas. The staff have been hard at work since 7am to assemble a special welcome in authentic Peruvian style. They start by heating up volcanic stones and firewood, all of which go into an earthen oven about a metre deep. The pachamanca is about to start.

This traditional cooking technique is used to prepare many Peruvian ingredients that are still little known outside the country. “Many people around the world already know potatoes, quinoa and peppers, but we have to continue investigating and studying products that are not as well known,” says León. “Then new things begin to appear, tubers like the mashuas and ocas, and not only quinoa but other grain varieties such as kiwicha and kaniwa.”

Once the stones have absorbed enough heat, it is time to start filling the earthen oven. “The first ingredients we put in are potatoes and sweet potatoes, then the meat,” says Hernán Castañeda, chef of Belmond Peru, who is visiting the hotel in the Colca Valley. “We have chicken, pork, beef and lamb. The meat has been marinating in Andean herbs since yesterday. Finally, we put in the fava beans and the ocas, Andean tubers.”

Eulert is the chef-owner of restaurant Matria in Lima and has been studying the culinary traditions of Peru for years. “For the pachamanca, we use a traditional aznapa, which is a mix of lots of herbs from the Andes. It’s the flavour of the mountains,” she says. To finish the preparations, the oven is covered with grass and earth. In the Colca Valley, it takes about two hours for the food to cook underground. 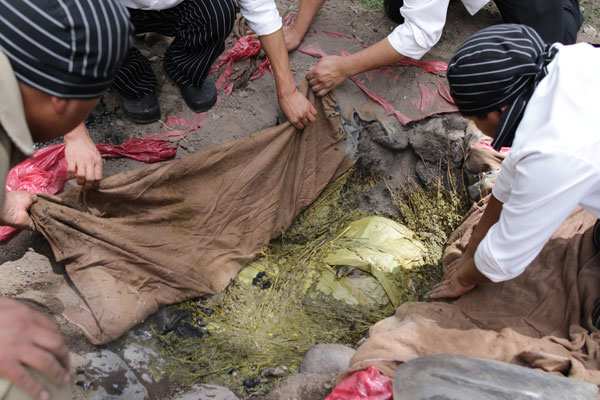 Opening up the pachamanca

A traditional preparation of the central Peruvian Andes, the pachamanca has origins dating as far back as the Inca Empire. Its name is a combination of ‘pacha’, the earth, and ‘manca’, meaning cooking pot in the Quechua language. As well as an ancient cooking technique, for the local people the pachamanca is also a way of paying homage to the goddess of earth, Pachamama.

When it is extracted from the oven, the food is earthy and flavoursome, the meat tender and with an acquired salty, mineral taste. “It was something I’d already seen in Mexico and I know that a similar technique is used also used in New Zealand by the Maori,” says Roš. “The mix of spices and the different tubers, the pumpkin and the meat were amazing. It was a fantastic meal.”

With a long and respected gastronomic tradition, Arequipa is something of a hidden gastronomic gem of Peru. “The region is famous for its freshwater prawns, which are said to be the best in Peru,” says León. “It is also known for herbs such as the huacatay [Peruvian black mint], for the artisanal fresh cheese characteristic of this region, and for its unique tubers.

“Many things make me proud of Peru: I'm a cook, so of course, the food; then the territory and landscape, the great diversity of scenery that you can find in the country from the coast to the Andes and the jungle; and the people, the good vibes and the desire to share what we have with those who visit us.”

León’s words ring true when the chefs are taken to visit La Nueva Palomino in the city of Arequipa, a traditional picantería restaurant, and are greeted by a party of locals and cooks dressed in colourful traditional clothes, playing music, singing and dancing with the chefs. 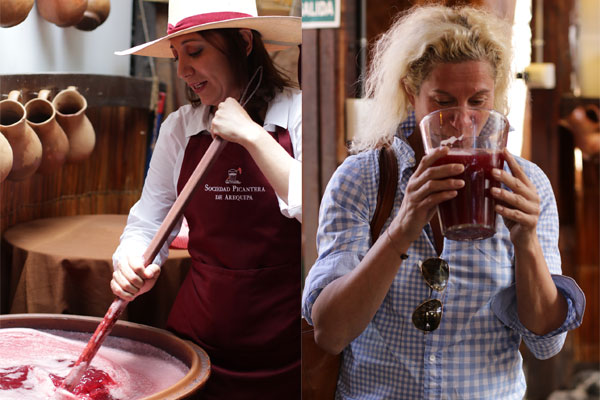 Picanterías are traditionally managed by women and passed down through generations, creating what the locals call the ‘matriarcado picantero’. Their rise dates back to the 16th century, shortly after the Spanish conquistadores founded the city of Arequipa, the same period when the consumption of chicha – a traditional drink made from fermented corn – was spreading across Peru.

The history of the picanterías is closely tied to that of the chicha, and a tour of the restaurant begins around the giant mud pot where the beverage is steeping.

“To make chicha, you start from the black corn,” explains Mónica Huertas, owner of La Nueva Palomino, which she inherited from her mother. “You shell the corn, let it sprout, then dry it, grind it and boil it.” The whole process takes a couple of weeks, as black corn germinates over a week or so and has to dry for at least five days. After grinding and boiling the corn for a few hours, the chicha has to cool, then it is strained and steeped with a bit of sugar for at least 24 hours. The resulting drink has a deep red hue and it is refreshing, rich and highly nutritious, thanks to the fermentation process that the corn undergoes.

Many ancient picanterías started out as chicherías – then, the owners realised that they could incentivise the consumption of chicha by serving hot, spicy dishes that would increase the patrons’ thirst. The traditional food of these Arequipa restaurants is, therefore, complex and highly aromatic. Despite serving as many as 1,500 covers per day, there are no hobs at the restaurant: everything is cooked on open fires the traditional way.

“The food of the picanterías blew me away,” says Roš. “Usually, when you talk about traditional food, you talk about simplified food – food that is made from the combination of two or three ingredients and not very rich in contrast. Today, I found the food extremely rich, so rich that sometimes I had to stop and say ‘Hey, I would like to know what the main ingredient is’. Even if traditional, the dishes had these practically futuristic flavours with so many combinations and interesting colours, even comparable to Thai food.” 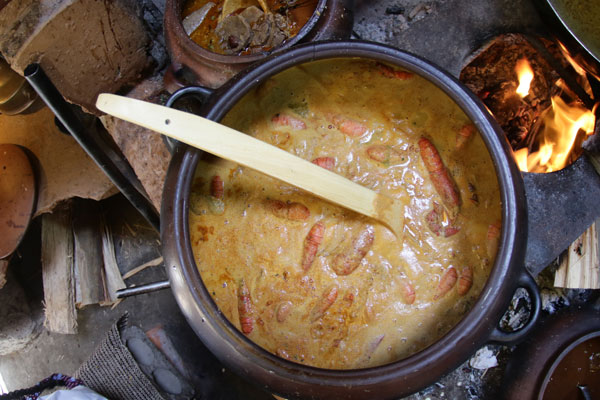 Traditional recipes include rocotó rellenos – spicy peppers filled with meat, eggs and cheese, a favourite of León – as well as many variations of the traditional soup known as chupe, with the most famous being the chupe de camarones, made from Arequipa’s famous freshwater prawns. Another traditional preparation is the cuy – deep-fried guinea pigs, crunchy on the outside while juicy and tender on the inside, a dish that is prepared for big celebrations.

The locals say that the picanterías are democratic restaurants, with a cuisine that lends itself to sharing and large tables where friends and strangers all sit together. The festive atmosphere, accompanied by traditional songs and large glasses of chicha, gets the chefs talking.

“I was very lucky to travel with Ana,” says León. “She is a career model. Like me, she also has children and a family, but she is in charge of a restaurant. I learnt from her that you can make it work. It's just about organising yourself and asking for help if necessary.” Eulert shares a similar feeling about the trip. “Ana is one of the best chefs in the world and she’s also humble and amazing. That’s the kind of person I want to meet in my life and I want to be a part of my kitchen.”

“I really loved what I saw, I think Peru is one of the most diverse countries one can imagine," says Roš. "For someone who likes food and is also interested in culture and nature, it’s practically a perfect spot.

“Every time you enter into a culture and a nature that you don’t know, if you open up your feelings and you try to understand what it’s about, it enriches you and it makes you so much happier. When I get home, I will transfer this happiness to my people. I really thank 50 Best for this experience, it has been amazing.”

Read about James Lowe's journey of discovery of the outstanding and unknown produce of the Andes; how Daniela Soto-Innes has joined Peruvian chefs Francesca Ferreyros and José del Castillo in the fight for a more sustainable fishing industry; and follow Jock Zonfrillo, Pedro Miguel Schiaffino and Matias Cillóniz as they explore the Amazon jungle.