Central is named restaurant of the decade in Latin America

The world-renowned Lima dining destination has been named The Greatest Restaurant in Latin America 2013-2021, sponsored by S.Pellegrino & Acqua Panna, at the culmination of multiple gastronomic gatherings across the region. Its chef-owners Virgilio Martínez and Pía León discuss the impact of Peruvian cuisine, the nature of innovation and reassessing food as medicine

“This is an award for doing what we love consistently over the last nine or 10 years: serving people and serving our community,” says a visibly emotional Virgilio Martínez immediately after his restaurant, Central, topped the list of Latin America’s 50 Best Restaurants 2021: Pasado y Futuro.

“We never imagined this,” adds his wife Pía León, also recently named The World’s Best Female Chef 2021. “We started as a small place just trying to please people, but over the years we started doing more and more new things and it just built!” 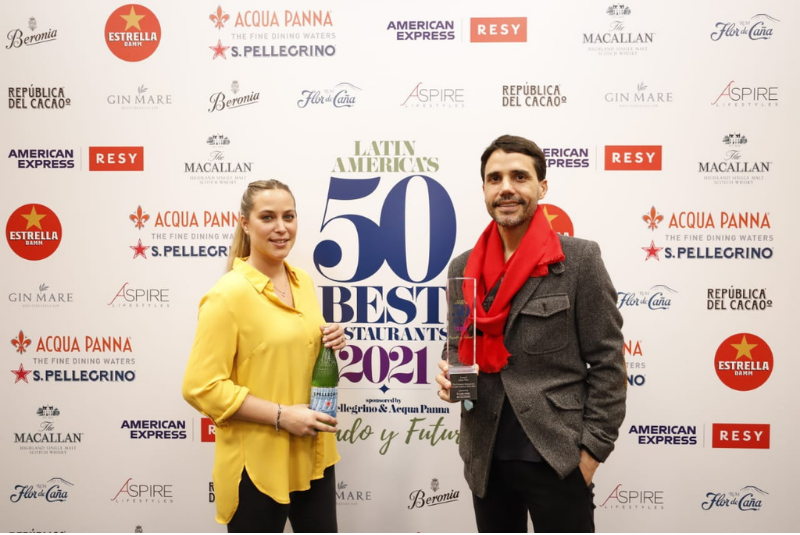 Central has been named No.1 in this year’s one-off retrospective ranking, which collates the votes over the history of Latin America’s 50 Best Restaurants since its inception in 2013. The reveal of the 100-strong list took place simultaneously at a series of live events on 22nd November in cities throughout Latin America, from Oaxaca in Mexico down to Santiago, Chile, which brought chefs and food lovers together in person once again.

Martínez and León’s humble approach belies the fundamental impact that Central has had on the region’s gastronomic scene over the last decade, mirroring the history of the Latin America’s 50 Best Restaurants list itself. The period has seen Latin American cuisine raise its global profile exponentially, powered by Central and fellow Lima restaurant Maido (No.2 in the newly unveiled ranking), Pujol in Mexico City (No.5), legendary Brazilian restaurant D.O.M. (No.3) and Chile’s Boragó (No.6), among others.

The Central team has taken the process of simultaneously nourishing the body and the mind to a new level, and it has done so while remaining delicious, fun and welcoming. Initially inspired by mentor Gastón Acurio’s brilliance in promoting and internationalising Peruvian cuisine, these ambitious young Peruvian chefs gradually developed their own singular approach, focusing on deep research, biodiversity and innovation. What began as a compact restaurant in the Miraflores district of the Peruvian capital in 2008 became the three-time winner of The Best Restaurant in Latin America award, before it moved to its current large premises in Barranco. It is currently ranked No.4 on The World’s 50 Best Restaurants 2021 list.

The exterior of Central in Lima, Peru (image: Ken Motohasi)

The Barranco complex houses not only the flagship, but also León’s own solo restaurant Kjolle, cocktail bar Mayo and perhaps most significantly the headquarters of Mater Iniciativa, the research project which drives so much of the menu development. The final member of the family is Mil, a restaurant and research centre in Moray’s Sacred Valley above Cusco. “We learn so much from the team at Mil, they are always bringing new things for us to explore,” adds Martínez.

The team’s multi-disciplinary and sustainability-led approach blends history, science and culinary innovation to showcase and celebrate the country’s vivid biodiversity, gleaned from the ocean and the Andes, fertile valleys and Amazonian jungle.

“Innovation is key. But not just in the kitchen, it’s in the mountains, in the Andes, in the Amazon... It has to come from a deeper understanding and then we can create something amazing. We try to create a happy place to work, and then people can have the state of mind to innovate.

“The true challenge is bringing different fields together,” continues Martínez. “Sometimes we have to stop thinking as cooks, and think as historians or scientists or farmers. We are currently looking at food as medicine and that’s hard to understand [from a chef’s perspective], it changes our mindset.”

Asked why he thinks Peruvian food and restaurants have become so admired, driving gastro-tourism to the country and wider region, Martínez says: “Gastronomy has value in Peru because it is authentic and nature plays a key role. Our gastronomy is progressing and evolving and we are just happy to play a part in this... Every single member of our team over the years has contributed to something meaningful. I want to thank them and all our colleagues all over Latin America.”

This year’s edition of Latin America’s 50 Best Restaurants 2021: Pasado y Futuro focuses not only on the eight years since the birth of the list, but also on the future of the sector through a series of special awards. These include: the American Express One To Watch Award, which is presented to Anafe in Buenos Aires, Argentina, and the Estrella Damm Chefs’ Choice Award – Best Reinvention, which is awarded to Eduardo García of Máximo Bistrot in Mexico City.

Other winners include Celele in Cartegena, Colombia, which picks up the Gin Mare Art of Hospitality Award and Corrutela in São Paulo, Brazil which bags the vitally important Flor de Caña Sustainable Restaurant Award. The overall ranking features entries from 12 countries and introduces 21 new restaurants across Latin America, broadening the spotlight on the sector.