In the latest instalment of 50 Best’s Igniting Passion series, presented by elit™ Vodka, we speak to Janse about her culinary journey at Le Quartier Français and beyond, how Isabelo is changing the lives of children in Franschhoek and why chefs must lead by example.

In April 2017, when Margot Janse took off her chef’s whites for the last time at Le Quartier Français – one of South Africa’s most famous restaurants and a regular on The World’s 50 Best Restaurants from 2002 until 2011 – there was still one initiative that ignited her passion. In 2009, she and her restaurant team had created the charity ‘Isabelo, Feeding Hungry Minds’, and despite her desire to take a break from the world of dining after more than 20 years behind the pass, she couldn’t leave this project behind.

“Living in South Africa, you are confronted with poverty on a daily basis,” says Janse. “In 2009, we wanted to create a programme where we could give back, but also create a gateway for our guests.” Janse selected a local playschool, which looked after 70 children under the age of five, and worked with a dietician to create a breakfast muffin that would provide the kids with the nutrients they badly needed. Then, every Friday, the restaurant’s guests would be invited into her kitchen to help the staff prepare the muffins and deliver them to the children.

It was the beginning of Isabelo, which Janse named after an expression in Xhosa language that loosely translates as ‘sharing is caring’. 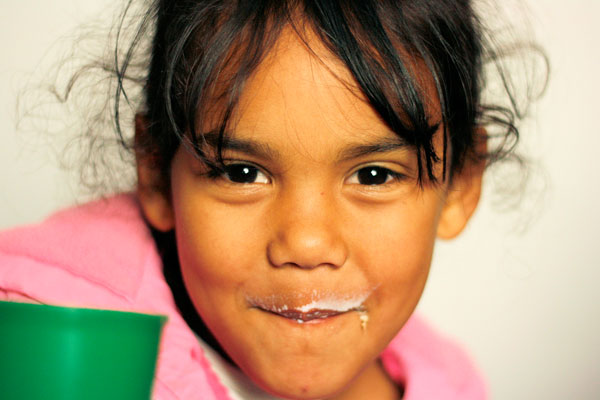 A child enjoys the breakfast provided by Isabelo

“The government provides school lunches, but it's never quite enough,” she says. “Very often, the children don’t even have dinner the night before. I don't think we have any idea of what kind of hunger that is, of what it feels like not to eat for a day and a half or two days. It's too decadent just to be busy with fine dining, where everything needs to be top class, while there are people who don't even have a carrot to eat.”

Through donations and Janse’s own fund-raising efforts, Isabelo started growing. “In one of the very first sessions, a guest said: ‘I want you to feed the children on another day. Here's $3,000, it should be enough for a year.’ He wanted to be anonymous, so we called him Mr Tuesday, because we then started feeding the children on a Tuesday as well,” she says.

Nearly ten years after the first batch of muffins, in 2018 the charity provided daily healthy breakfasts to over 1,000 children across two primary schools, as well warm, protein-based lunches to 200 pre-school children – a total of 336,980 nutritious meals a year.

Since adopting Isabelo independently of the restaurant in 2017, Janse has been managing the charity from her own house – but that doesn’t mean that she is alone in her efforts. On 16th February, 25 international chefs – including personalities from the 50 Best family such as May Chow, Mauro Colagreco, Rodolfo Guzmán, Pía León, Virgilio Martínez, Alain Passard, Ana Roš and Heinz Reitbauer – are converging in Brussels, Belgium, to collaborate on three unique dinners, with the proceedings going towards the charity.

The international chefs will be hosted in the kitchens of Chef Christophe Hardiquest’s restaurant Bon Bon, Karen Torosyan’s restaurant Bozar and Pascal Devalkeneer’s Le Chalet de la Forêt, with the three dinners taking place in the city at the same time. Ticket sales for the dinners, organised with the help of 50 Best TasteHunter Amelie Vincent, are open on the restaurants’ websites.

“The chefs in Brussels have been phenomenal and the response from the community has been incredible, a bit intimidating almost,” says Janse. “But it's been fun. From all the years that we appeared in The World’s 50 Best Restaurants, we made a lot of connections. We did many pop-ups and forged beautiful friendships. I'm talking across time zones, from Hong Kong to New York, Peru and Chile, and connecting with everyone.”

As well as raising funds for Isabelo, the dinners will also feature unique South African ingredients that Janse is sending to the chefs. “We have such incredible things in South Africa. I know that as a chef, it is super exciting when you get your hands on something you've never seen before,” she says.

“There is an indigenous herb called buchu that grows only in the Cape region. It has incredible detoxing and anti-inflammatory properties, and a stronger compound of the flavour of blackcurrant than blackcurrant itself. It's a very interesting and strong herb that can go with root vegetables, pumpkin or chocolate. Alain Passard, Mauro Colagreco and Pascal Barbot are cooking with buchu.” Diners will also have a chance to try the fruit of the baobab tree, Baleni salt from a natural hot spring in the north of South Africa, local sour figs, honey flower tea and marula nuts. 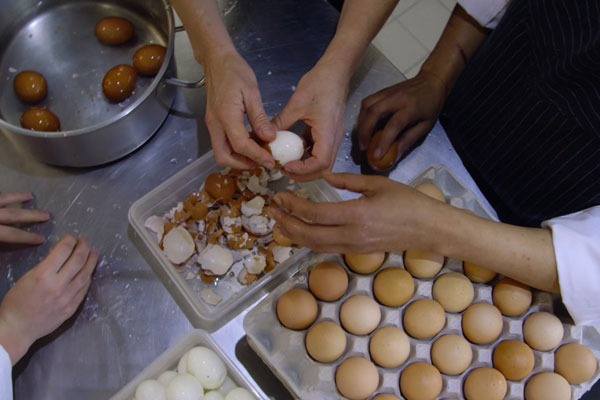 The team at Le Quartier Français peeling eggs for Isabelo

Over 20 years at Le Quartier Français, Janse built a reputation for her creative cuisine that highlighted southern African flavours, incorporated ingredients from the restaurant’s garden and paired the dishes with local wines. Now, she sees her work at Isabelo as an extension of this ethos.

“From day one, I have always wanted to highlight all the beautiful things in this country. It's almost a continuation now to be catapulting the ingredients into the world and exposing these chefs – who have seen everything in the world – to new products,” she says.

As well as preparing the meals for the children, at Le Quartier Français Janse also found other ways to give back, motivated by the inequality she witnessed on a daily basis. “I wasn't born in South Africa, so none of this is natural in my DNA – to have such separation, segregation and difference,” says Janse. “I managed to create a good life for myself, but I couldn't enjoy it without giving back.

“Our staff was 70% from the village and we had training programmes for hospitality and for the kitchen. I had a number of cleaners who worked themselves up over the years. Two became sous chefs and others became senior chefs de partie or brilliant waiters. I think this is another aspect of this country that is very special, that there are a lot of opportunities,” she says.

Preparing the meals for the Isabelo children became part of the routine at the restaurant. “When you help people, it's so appreciated. As a chef, you don’t only have a responsibility to do it, but also to show your team that it's part of your daily make up,” she says.

“I expected it to be treated with the same respect as the food that we served for the paying customers. Sometimes we would make pasta for the children, and I would be cross if it was even slightly overcooked, because why can't we put the same care in cooking for the needy as you do for those who are privileged enough to pay for it?” 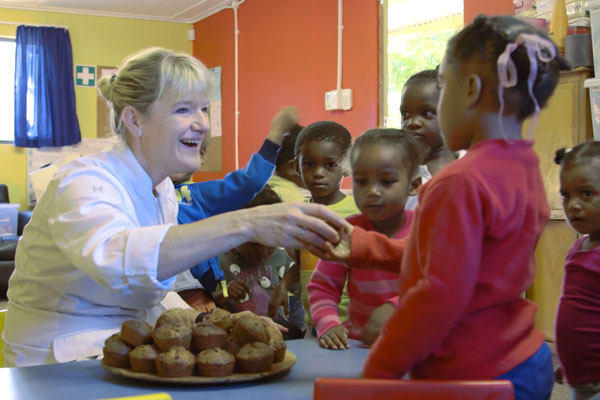 Janse shares muffins with the children

Janse has long been vocal about chefs’ responsibility to do more than cook. “It's about getting a message across that we need to do more than just create beautiful food in our industry. We need to make a difference. Lots of chefs are doing it, but it should be almost a given,” she says.

The experience of working for Isabelo also provided challenges for the staff, who had to come up with creative culinary solutions. When they first prepared the breakfast muffin and served it to the children, many of them wouldn’t eat it. The muffin was packed with raisins and oats to make it nutritious, but the texture was unfamiliar to the children.

Janse and her team came up with a solution: they soaked the raisins and oats in orange juice, then puréed them before adding to the dough and baking. “The whole muffin completely changed texture, but the children loved it. If I bring it now, they say: 'Oh, it's cake!' But it's a very healthy cake,” she says.

“Poverty and hunger are so massive that if I think of how many people go hungry, I think gosh, I'm just one drop in the ocean. But at least it's a drop. And if it can inspire other people to do similar things, or cause some kind of ripple effect in the community, or get people thinking differently about what they're doing, then it's a worthy drop in the ocean.”

You can buy tickets for the dinners in Brussels on Saturday 16th February 2019 on the following restaurants’ websites: Bon Bon, Bozar and Le Chalet de la Forêt.

Header images: Janse and the children involved in the Isabelo initiatives. The images on this page are courtesy of Isabelo.