Chefs, bartenders and restaurateurs around the world have come together to fundraise, start initiatives and show their support for the people of Ukraine. Here is an outline of some of the incredible efforts made by the global food and drink community, plus links to donate and show support

This article will continue to be updated to cover more areas of the world and new initiatives. (Last update: 08/04/2022)

Worldwide initiatives
While many projects have been established by members of the gastronomic community over the past weeks, three have been swept onto the world stage and are raising funds for globally acclaimed charities.

The #CookForUkraine campaign is the brainchild of Russian chef Alissa Timoshkina and Ukrainian Olia Hercules. By celebrating traditional Ukrainian food, the pair hope to spread awareness about the recent humanitarian crisis and to raise money with Unicef, which provides on-the-ground support and emergency care to refugee families.

Restaurants across the world are pledging donations to the cause, including London-based Ikoyi, Kol – where chef Santiago Lastra is also offering an auction prize for a table at the restaurant – and Sabor, which is adding a special cocktail and dish to its menu. 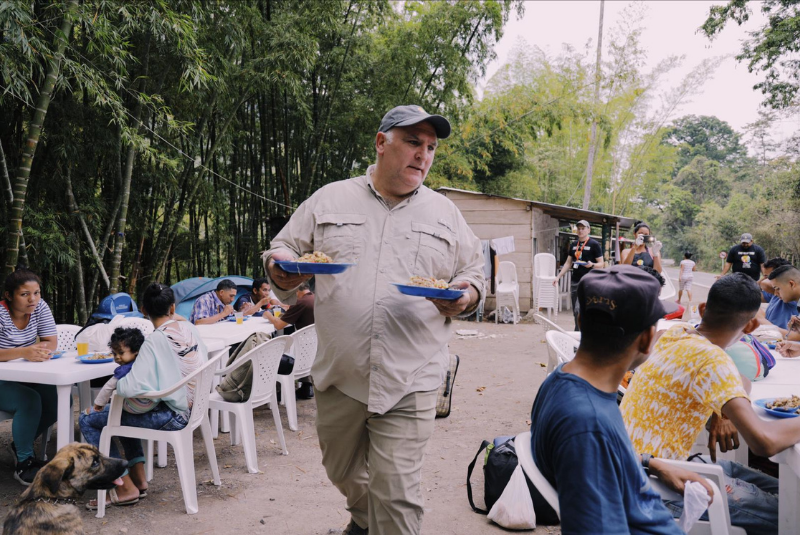 World-renowned chef and humanitarian José Andrés (winner of the Icon Award 2019) is volunteering on the front lines at eight border crossings across Ukraine. His team are helping local restaurants to provide hot food to tens of thousands of families in need.

To date, the #ChefsForUkraine movement has helped to serve nearly 1 million meals and has posts on the Polish-Ukrainian border, and in Lviv, Kharkiv and Kyiv.

Chef Paola Velez, who set up Bakers Against Racism in the wake of the pandemic, has turned the attention of her baking community to the crisis in Ukraine. Velez calls all bakers, chefs and home cooks across the world to host their own bake sales and donate to local charities and organisations such as World Central Kitchen, Save the Children and International Rescue Committee.

Started by a group of Italian bartenders, spearheaded by Daniele Maciò and amplified by IndieBartender, #MakeDrinksNotWar sees bars donate the profits of a spritz to Unicef’s campaign to support children affected by the war. These drinks will be emblazoned with the Ukrainian flag on the glass and are created bespoke for this initiative. The initiative is soon to be rolled out further afield and the bars involved so far include: 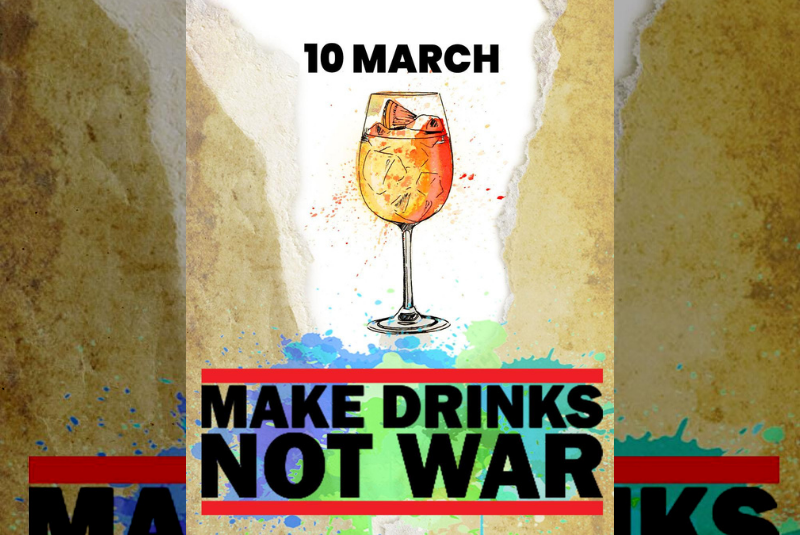 Local support
Restaurants and bars across the world have joined the movement with smaller, but no less significant contributions.

The inimitable Dominique Crenn, winner of the Icon Award 2021 and chef-owner of Atelier Crenn in San Francisco (No.48 in The World’s 50 Best Restaurants 2021) is breaking bread in solidarity with the people of Ukraine. As part of her Chefs for Unity challenge, from which all proceeds are donated to José Andrés’ World Central Kitchen, Crenn shared her own bread-making recipe and nominated world-renowned chefs such as Eric Ripert and Daniela Soto-Innes to bake a loaf of their own. The challenge concludes on 11th May during a fundraising event that will be livestreamed worldwide.

Throughout the pandemic, chefs Yoshihiro Narisawa of Asia’s 50 Best Restaurants regular Narisawa in Tokyo and Hisato Hamada of Wagyumafia have supported medical staff and hospital workers across the country by donating profits from their special onigiri, Japanese rice balls.

Struck by the plight of the people of Ukraine, the chefs have shifted their focus. A #OnigiriForUkraine event will take place on Monday 11th April and all profits from their creations will be donated to Unicef Japan’s Emergency Fund for Ukraine. 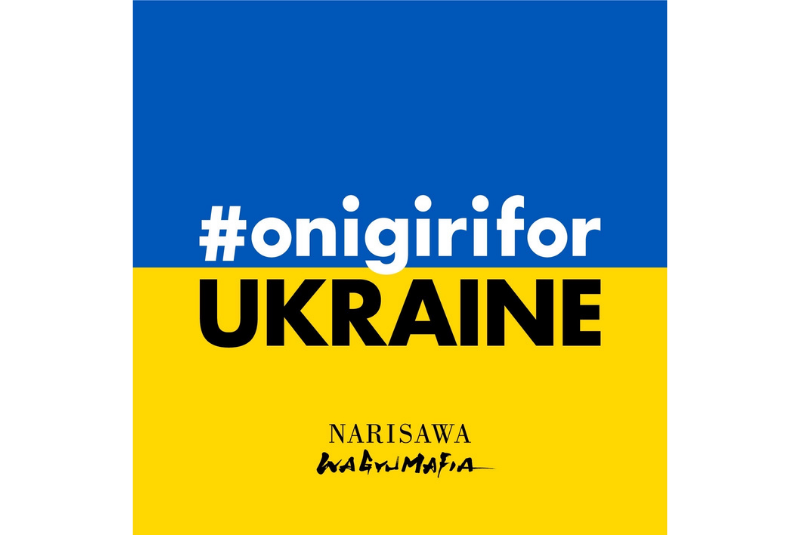 Ukrainian-born bartenders, bar managers and marketers are collaborating to support their compatriots with the founding the BudmoUA organisation. Taking its name from the nation’s most popular toast, budmo, meaning ‘let us be’, the charity provides support for Ukrainian restaurants that are cooking for troops, medical staff, the elderly and young families in need.

To raise funds, BudmoUA have organised jazz evenings and created a sticker to place on cocktail glasses, encouraging guests to cheer for Ukraine and donate to the cause.

One of New York City’s most popular Ukrainian restaurants has become a symbol of solidarity for the eastern European country. Thanks to their project ‘Eat Borscht and Stand with Ukraine’, queues of people stretch daily through the East Village to buy borscht, a traditional Ukrainian soup, all profits from which are donated to non-profit Razom For Ukraine.

The World’s Best Restaurant 2021, led by chef René Redzepi, donated all their beverage sales on 4th March to the Red Cross, a charity that provides aid, including hot food and clothes, to people in desperate need in Ukraine.

The cocktail bar in London’s Fitzrovia neighbourhood hosted a fundraiser in collaboration with a premium Ukrainian vodka brand. At the ‘Donate with Drinks’ event, all beverages were £10 and proceeds were donated to British-Ukrainian Aid.

Asia’s Best Female Chef 2022, Natsuko Shoji, is flying the Ukrainian flag in cake form from her restaurant Été in Tokyo. All proceeds from her limited-edition blue-and-yellow creations are being donated to Unicef.

Tom Sopit, partner of Employees Only, a cocktail bar with sister venues in New York, Sydney and Singapore, is showing solidarity with the Ukrainian community in Los Angeles and in eastern Europe. His latest cocktails are created with Ukrainian vodka, stone fruit and berries, in imitation of nalewka, a popular Ukrainian liqueur.

The eastern European food concept, led by Trina and Jessica Quinn, started a campaign under the #CookForUkraine slogan in collaboration with New York City-based bakers and pastry chefs. Their sweet and savoury pastry boxes raised over $10,000 in support of Ukraine.

Ukrainian-American chef Johnny Clark re-invented the menu at Chicago’s popular restaurant, Wherewithall. A portion the proceeds from his Ukrainian-inspired prix-fixe offering, which was available from 9th to 13th March, was donated to Razom For Ukraine.

Rasmus Kofoed, head chef of Geranium, ranked No.2 in The World’s 50 Best Restaurants 2021, is planning a special lunch service on 27th March at his plant-based pop-up, Angelika. All proceeds from the meal, which includes a tasting menu and drinks pairing, will be donated to Unicef to support their work in Ukraine.

Venues on Brooklyn’s Vanderbilt Avenue are showing their support of Ukraine on 14th March with a street-wide benefit. Cocktails will be served by Haley Traub of Attaboy, the Legend of the List Award winner in 2021, and small plates will be created by New York City favourites Golden Diner and Bien Cuit. All proceeds will be donated to The Ukraine Crisis Relief Fund, which provides support, food and shelter to refugees.

Publiq, The Gibson and Coupette, London
Fundraising for: Razom for Ukraine
Read more and donate

For three nights in March (15th at Publiq, 16th at The Gibson and 20th at Coupette), some of London’s favourite bars are hosting events for the ‘Meaningful Drinking for Ukraine’ campaign. Featuring the creations of bartenders such as Eddie Rudzinskas, Simone Bodoni and Andrei Marcu, the bars will be donating 30% of all profits to non-profit Razom for Ukraine.

On 16th March, notable chefs across Chicago, including Tony Priolo, Sarah Stegner and Darren Gest, will be collaborating in a one-of-a-kind evening of top gastronomy to raise money for their campaign, ‘Chicago Chefs Cook for Ukraine’. All proceeds will be donated to José Andrés’ organisation, World Central Kitchen.

A post shared by Chicago Chefs for Ukraine (@chicagochefscookforukraine)

The restaurant team from Mirali, one of Ukraine’s first fine-dining restaurants with a focus on local produce and in-house fermentation, has emigrated to Berlin following the crisis in their home nation. Together with Billy Wagner of Nobelhart & Schmutzig and with the support of other Berlin-based restaurants, Mirali will be hosting a charity dinner in the German capital.

The special set menu, devised by chef Wagner and chef Mirali Dilbazi, will be created with products transported by GoodWine from Ukraine, and will raise money for humanitarian efforts across the nation in eastern Europe. All proceeds will be donated to Goodwine, who have stopped regular business operations and are now dedicated to the humanitarian relief effort. They serve up to 400 meals a day to people in need.

Mirali will be touring Germany on:

The Greek non-profit civil partnership, Metron Ariston, which was co-founded by 50 Best Bars Academy Chair Eleni Nikoloulia, is supporting the Ukrainian community. The organisation has created a platform for refugees looking for work in the hospitality sector, and is acting as liaison between the migrants and hotels, bars and restaurants in Greece and across the European Union.

Berlin-based Laurel Kratochvila is encouraging bakers to show their solidarity for the people of Ukraine with her baking initiative. More than 130 home bakers, cafés, delis and restaurants around the world have created and sold the traditional Jewish pastry hamantashen in March, with all proceeds donated to a Polish charity that provides food and aid to Ukrainian refugees. 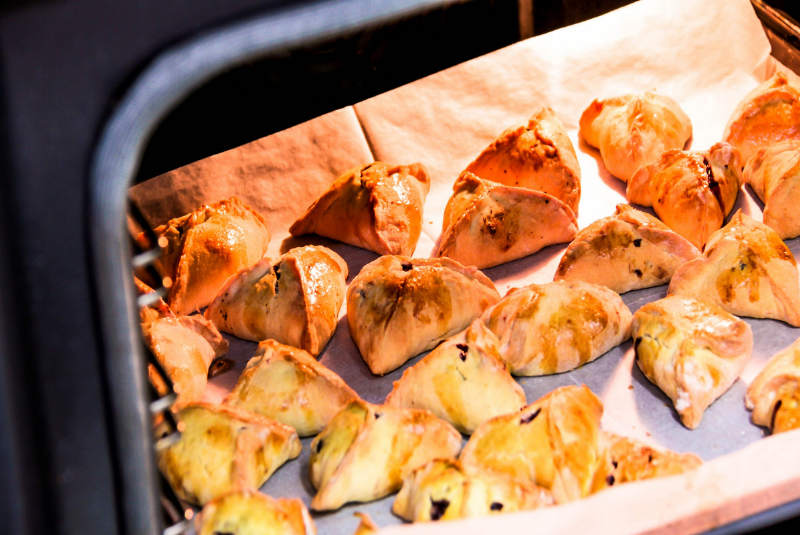 The Hong Kong-based bar, led by head bartender Artem Fatkulin, is doing its part to raise awareness and support for the people of Ukraine. Besides sharing a collection of graphics and videos with information about the ongoing crisis, the team has also added a special cocktail to their takeaway menu – the Herno Lemon Balm Gimlet – all proceeds for which will be donated to humanitarian aid.

There are also plans to collaborate with bartenders Pernod Ricard and Gagan Gurung of neighbouring bar, Tell Camellia to raise money for the cause.

Other organisations providing food aid
Anyone can donate to the following non-profits providing much-needed support in Ukraine.

Spearheaded by the #AllTogether4Ukraine campaign, the organisation is raising money to provide emergency food and sustenance to Ukraine and neighbouring countries including Moldova, Romania and Poland.

CARE is one of the world’s largest humanitarian aid organisations, dedicated to fighting global poverty. The Ukraine Crisis Fund is providing food and drinks, as well as other aid, to families across the country.

This article will be updated as more initiatives come to the 50 Best team’s attention. Please contact the writer via Chloe.Vialou-Clark@wrbm.com with other hospitality initiatives for consideration.