Brunch with Mauro Colagreco, dinner by Massimiliano Alajmo, afternoon tea courtesy of Karim Bourgi… these are just some of the one-time-only culinary experiences available to diners in Abu Dhabi as part of the Middle East & North Africa’s 50 Best Restaurants event programme in early 2023. Check out the extensive 50 Best Signature Sessions collaborative dining series as well the all-new Flavours of 50 Best evening. Just make sure you come hungry

It’s destination Abu Dhabi for food lovers across the Middle East and beyond come late January 2023, as 50 Best curates a series of unique dining experiences that is as extraordinary as it is extensive. The 50 Best Signature Sessions see some of the finest chefs from across the world, as well as leading culinary figures in the MENA region, join forces with local chefs and restaurants in the UAE capital from Friday 27th January through to Wednesday 1st February. 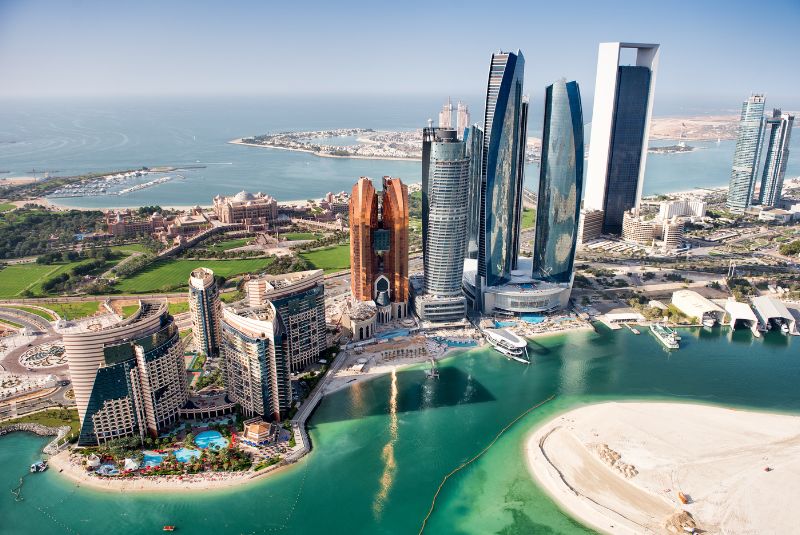 And in a fresh launch specifically tailored to the Middle East, the programme also includes an international brunch like no other. Flavours of 50 Best, taking place at Graphos Social Kitchen in Hilton Yas Island on the evening of Saturday 28th January, will include signature dishes showcased by world-topping chef Mauro Colagreco of Mirazur in Menton, France, Mexican rising star Santiago Lastra of London’s Kol and Asia’s Best Pastry Chef 2022, Maira Yeo. The full brunch experience will include drinks offerings a-plenty created by some of The World’s 50 Best Bars, as well as premium food stations to suit every taste.

These dining opportunities will be hosted by Abu Dhabi’s leading restaurants, including Talea by Antonio Guida at Emirates Palace, Al Mayass in The Galleria on Al Maryah Island and The Observatory on the 74th floor of Conrad Etihad Towers. Finally, Maté at the Abu Dhabi Park Hyatt will play host to Chef Tomer Tal of George & John in Tel Aviv, Israel (No.10 in MENA’s 50 Best Restaurants 2022), enacting a cross-border collaboration that sends a positive message of cooperation and cultural exchange through food.

Here’s everything you need to know about these delicious dining opportunities, starting with Flavours of 50 Best and then going in chronological order. Each of the host restaurants will run its own booking system, with details on how to register for the coveted reservations included below. 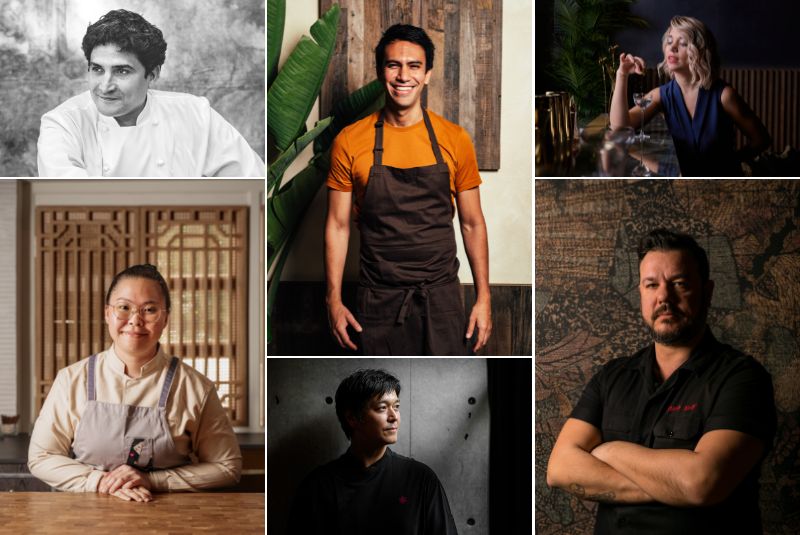 This entirely new concept is making its debut in the UAE, the birthplace of the modern brunch! Flavours of 50 Best offers an evening brunch experience at Graphos Social Kitchen within the Hilton Yas Island hotel, featuring dishes from some of the world’s leading chefs, including the one and only Mauro Colagreco.

Alongside an extensive food and drink offering – from lobster counters to cocktail bars, live barbecue stations to smoothie carts – four globally renowned gastronomic names will each serve a signature dish to all diners, as well as demonstrate its plating and discuss its origin and inspiration in live kitchen interviews.

Mexican chef Santiago Lastra of Kol in London, which blasted onto The World’s 50 Best Restaurants extended list in 2022, will kick off proceedings, followed by Japanese maestro Hiroyasu Kawate of the brilliant Florilège in Tokyo. They will be followed by Mauro Colagreco, the chef-owner of Mirazur in Menton, France, which was ranked the No.1 restaurant in the entire world in 2019 and is now part of the Best of the Best hall of fame. The signature dishes will be completed by a special dessert from Asia’s Best Pastry Chef winner Maira Yeo of Cloudstreet in Singapore.

Complementing the culinary talent, guest bartenders from The World’s 50 Best Bars will also be on hand to mix exclusive cocktails (both alcoholic and non-alcoholic), including Patrick Pistolesi, the charismatic creator of Drink Kong in Rome, and Coralie Doillet of the wonderful Galaxy Bar in Dubai.

Expect an evening of great entertainment, extensive eating, plentiful drinking options and the chance to sample dishes from – and even meet and chat to – some of the biggest stars in the culinary firmament. We look forward to welcoming you to an event filled with the Flavours of 50 Best. 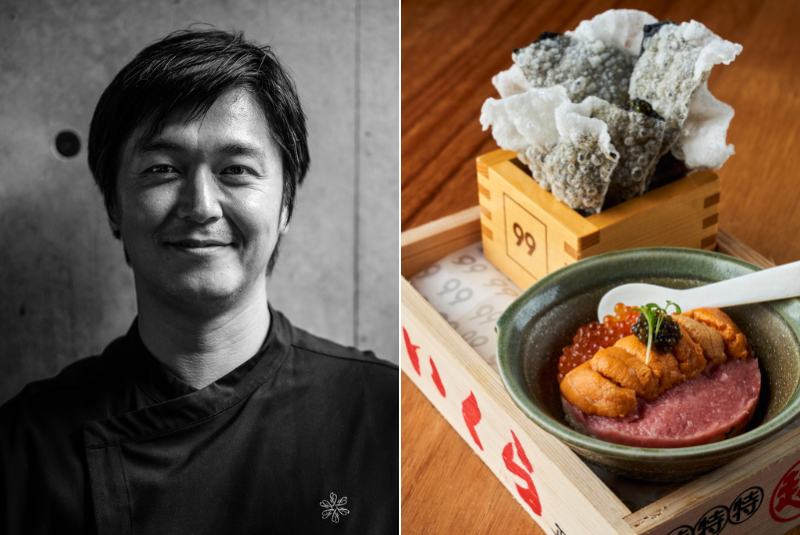 Who: As the chef-owner of Florilège in Tokyo, Hiroyasu Kawate is at the head of a new generation of forward-thinking Japanese chefs. Having risen to be ranked No.3 in Asia’s 50 Best Restaurants 2022, Florilège debuted on The World’s 50 Best Restaurants list the same year. Kawate-san will work in unison with the team at 99 Sushi, which is one of just three restaurants in the UAE capital to have received a Michelin star, to create a modern Japanese menu for one evening only.

What else: Expect an exceptional omakase experience served in 99 Sushi’s elegant surrounds within Al Maryah Island’s upscale The Galleria, priced at 990 AED per person with wine pairing. 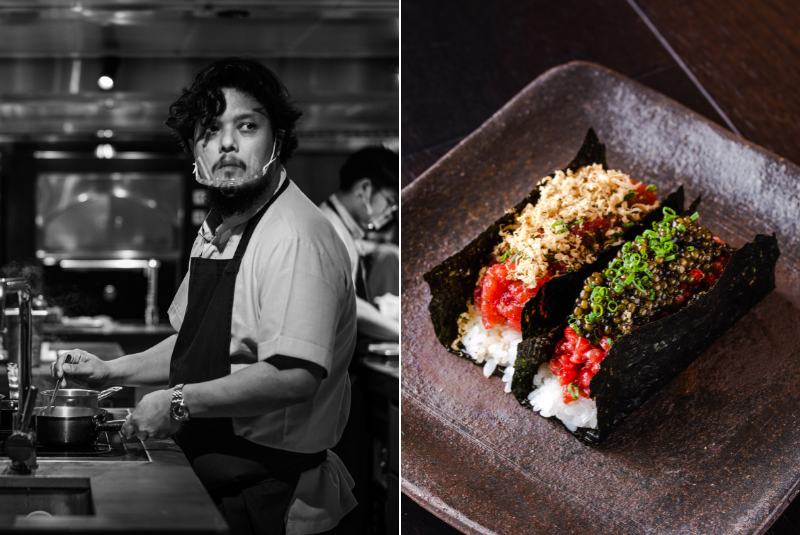 Who: Darren Teoh is the chef and founder of Dewakan in Kuala Lumpur, voted The Best Restaurant in Malaysia by Asia’s 50 Best Restaurants 2022. Famous for championing the indigenous produce of his home country, Teoh is Malaysia’s most high-profile culinary figure, but remains both passionate and humble. Dewakan’s food will find a one-night-only home at Otoro, the first Abu Dhabi restaurant from chef Akmal Anuar, who co-founded 3 Fils – named The Best Restaurant in Middle East & North Africa 2022 – as well as Goldfish and 11 Woodfire in Dubai.

What else: Having admired his work for some years, Anuar specifically picked out Chef Teoh for this 50 Best Signature Session. Teoh and his team will present a six-course menu mixing signature dishes with some new creations, supported by the Otoro crew, priced at AED 625 per person with a non-alcoholic beverage pairing option at AED 100. 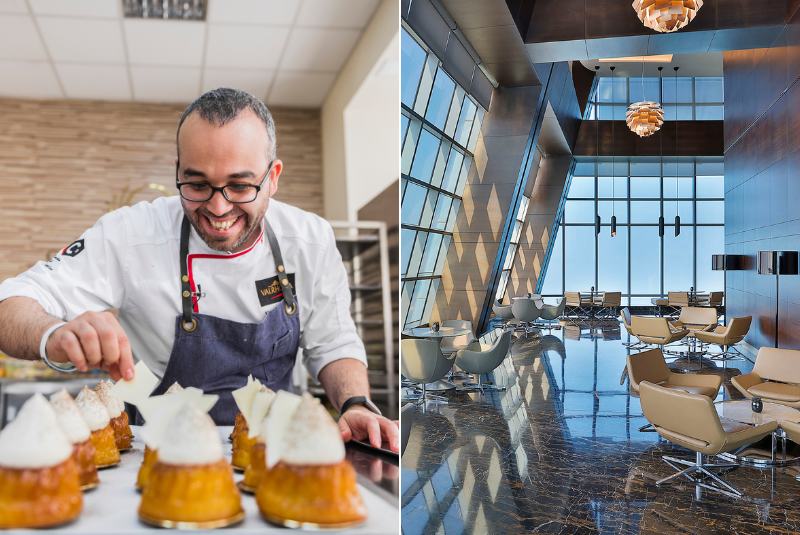 Who: Pastry chef Karim Bourgi is arguably one of the hottest names in the Middle East right now, famous for his signature French-style patisserie and baking skills, and with a range of dessert bars, cafes and restaurants across the region. The head pastry chef of the Al Mana Group will bring his standout pastry skills to bear on an exclusive Afternoon Tea experience at Conrad Etihad Towers in collaboration with the hotel’s award-winning Executive Pastry Chef, Sumeda Palihakkara.

What else: Customers can choose to reserve their Afternoon Tea experience in either the 63rd-floor Observation Deck (AED 260) or the Lobby Lounge (AED 230) on either Saturday 28th or Tuesday 31st. 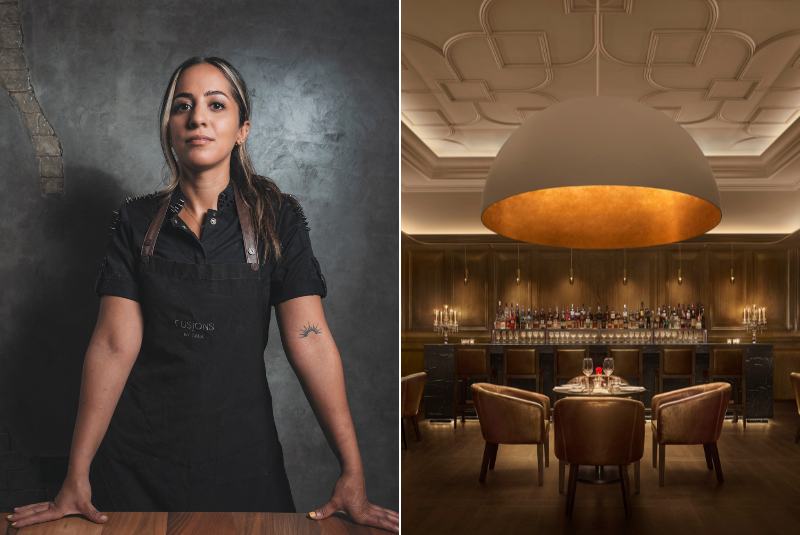 Who: Named MENA’s Best Female Chef 2022, Bahraini-born Tala Bashmi has elevated her Manama restaurant, Fusions by Tala, to prestigious heights in recent years. A skilled advocate of updating and reinventing traditional regional dishes, she will cook in Abu Dhabi for the first time at the beautiful Oak Room, the Edition hotel’s signature steakhouse overseen by celebrated British chef Tom Aikens.

What else: Enjoy pre-dinner drinks in the adjacent Library Bar before a four-hands menu co-created by Bashmi and Oak Room’s culinary team priced at AED 500, with the option to add a wine pairing for AED 250.

Book: Online here, or alternatively by emailing restaurantreservations.auh@editionhotels.com or calling +971 2 208 0000 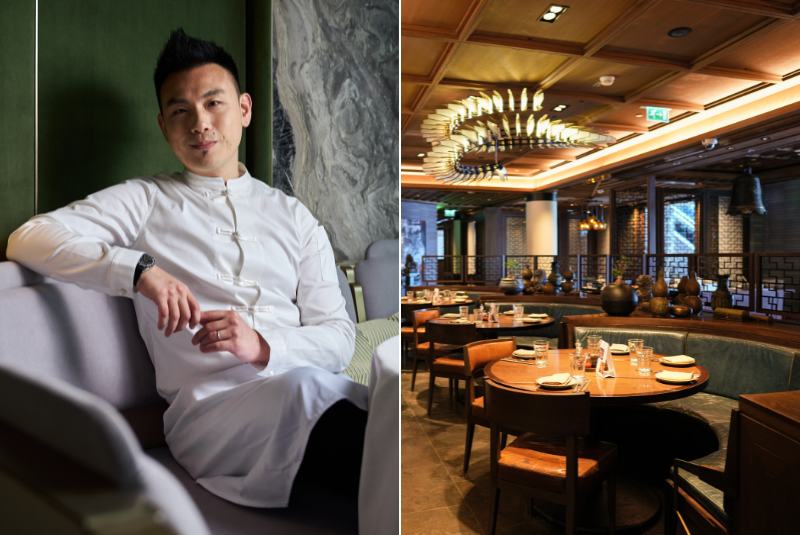 Who: Vicky Cheng is the dynamic Hong Kong chef behind French-Chinese restaurant Vea and the newer Wing, which focuses purely on regional Chinese cuisines. Having opened in 2021, Wing is already ranked in the extended list of The World’s 50 Best Restaurants, reflecting the acclaim with which it has been greeted. Chef Cheng will work in tandem with Dai Pai Dong’s own Chef Nie Dong and team to create a very special Cantonese-focused menu.

What else: This exciting collaboration follows the hugely popular Tim Raue dinner at the same venue in February 2022 and promises to provide an even more refined and memorable experience. 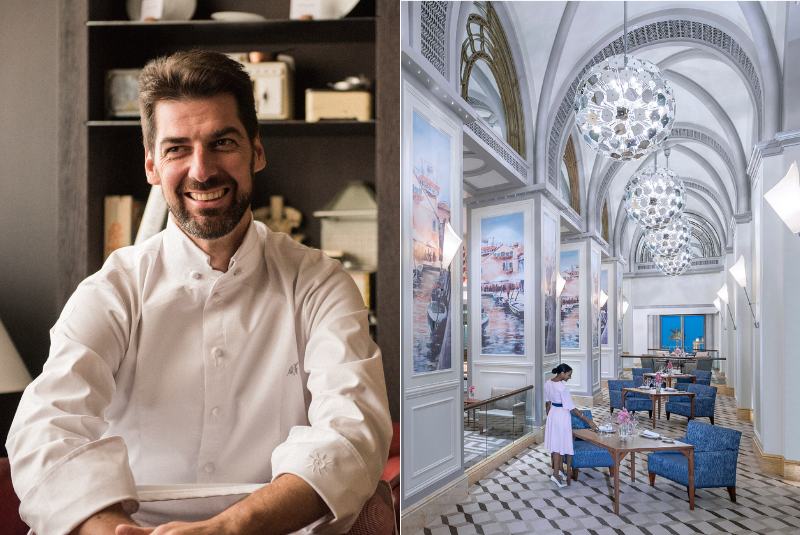 Who: The Alajmo clan are arguably the first family of Italian cuisine – and Massimiliano its most celebrated son. A culinary prodigy who was the youngest chef in history to gain three Michelin stars at Le Calandre, the family’s flagship restaurant in Rubano, north-east Italy, he is now established as one of the great Italian chefs of the 21st century. He will showcase his innovative take on classics alongside Chef Luigi Stinga of Talea by Antonio Guida within the emblematic Emirates Palace Mandarin Oriental.

What else: Diners will be taken on a voyage of Italian culinary discovery in the beautiful indoor/outdoor setting of Talea, which recently gained one of Abu Dhabi’s first Michelin stars. 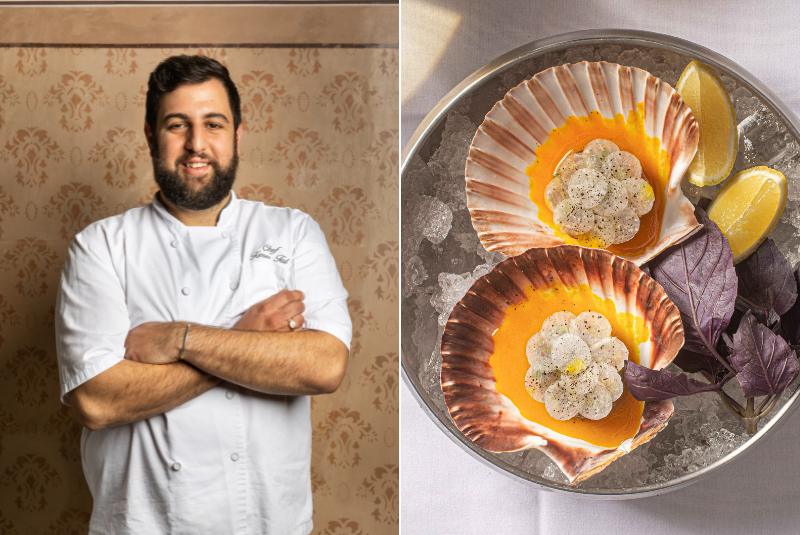 Who: Tomer Tal leads the kitchen at George & John, one of Israel’s most long-established and successful restaurants, located in Tel Aviv’s historic The Drisco hotel, as well as being a judge on the country’s most high-profile TV cooking shows. He joins the team at recently opened beachfront restaurant Maté within the Park Hyatt’s luxurious Saadiyat Island resort for a momentous cross-border collaboration.

What else: Diners can expect an 8-course menu mixing influences from across Israel, the Arab world and beyond to South America; priced at 645 AED, with a beverage pairing option (including wine and cocktails) for 195 AED. 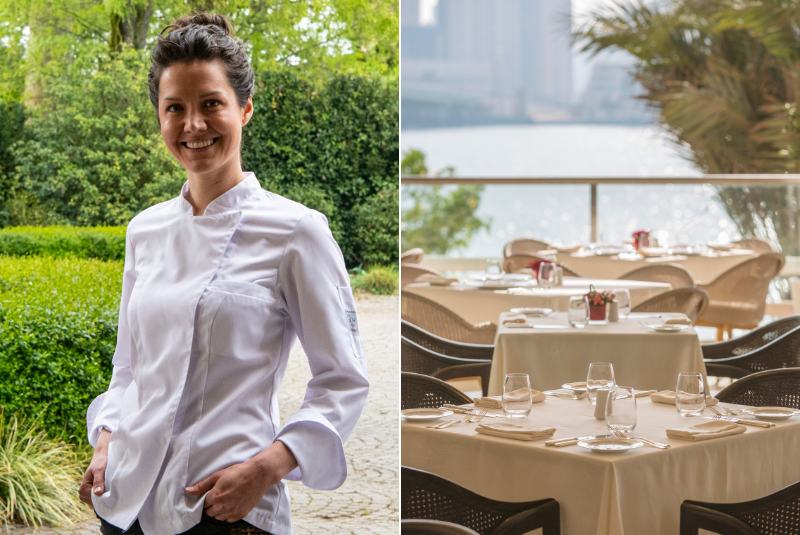 Who: Hailing from Canada, but based in Italy for almost a decade, Jessica Rosval is the head chef at Casa Maria Luigia, the luxury boutique guesthouse-restaurant from Massimo Bottura and Lara Gilmore of Osteria Francescana fame. There, Rosval recreates a selection of classic dishes from OF (formerly The World’s Best Restaurant, now part of the Best of the Best hall of fame), as well as introducing her own specialities. She is the perfect match for Café Milano, notorious for its warm hospitality and authentic dishes, for a unique Italian-accented evening.

What else: Rosval, considered a rising star in international food, will introduce some of her own signatures to a six-course Italian feast, priced at 870 AED including wine pairing. 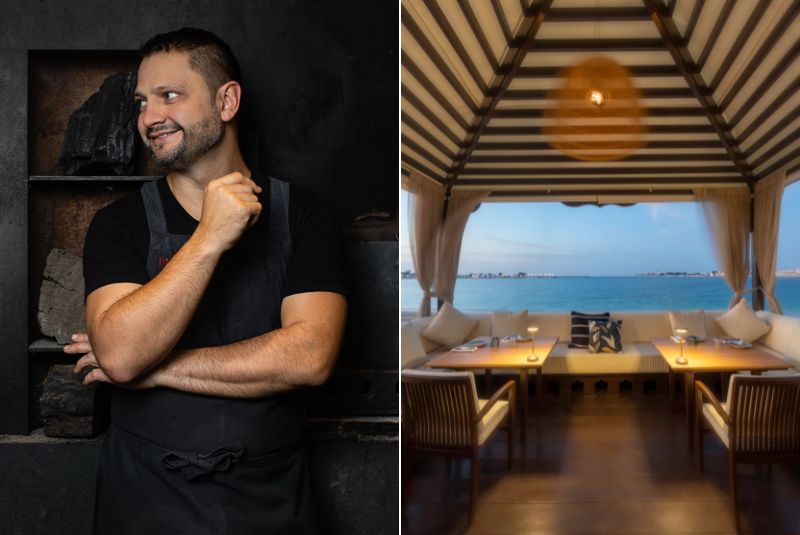 Who: Lennox Hastie is the grillmaster behind Firedoor, the outstanding barbecue-led restaurant in Sydney. A reservation at Firedoor is fast becoming one of the most exclusive seats in Australia, with diners flocking from all over the globe to sample the elevated smoke- and fire-led cooking which treats meat, fish, seafood and vegetables with equal reverence. Hastie will be following in the footsteps of Aussie cook Dave Pynt (Burnt Ends, Singapore) who last year took over the outdoor grills at BBQ Al Qasr for an outstanding evening of barbecue cookery for the inaugural 50 Best: Playing with Fire immersive dinner. This year’s menu will be served family style, with Hastie’s signature 200-day dry-aged beef rib, his legendary paperbark grilled fish and ultra-smoky crab and corn all taking centre stage.

What else: The evening will begin with cocktails and canapés around the fire, before diners head to heated beachfront cabanas to enjoy the seven-course extravaganza. Want to learn more about Hastie’s skill with flame-cooked food? Check out this Masterclass he filmed with 50 Best to help you cook like one of the world’s best pitmasters at home. 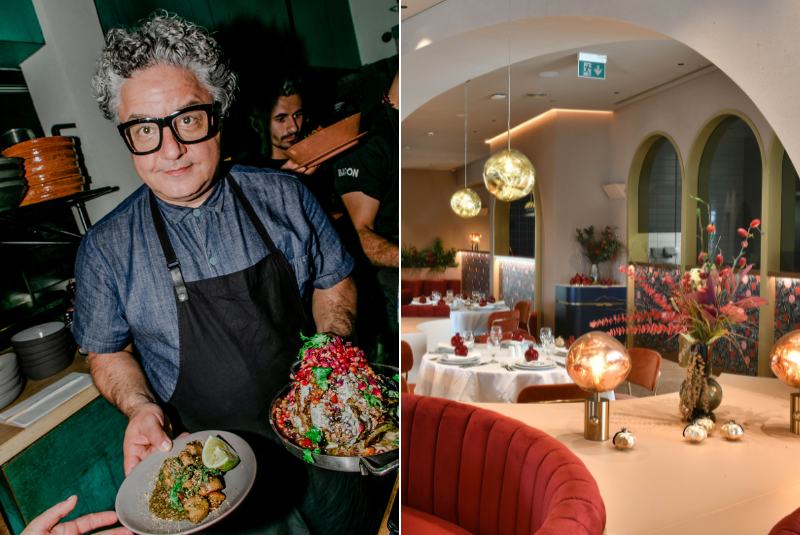 Who: Athanasios Kargatzidis – aka ‘Chef Tommy’ – is a major personality in Middle Eastern food with his flagship, Baron, named The Best Restaurant in Lebanon at MENA’s 50 Best Restaurants 2022. He will bring his mix of Mediterranean and Levantine ingredients and influences to Abu Dhabi’s premium Lebanese establishment, Almayass, overlooking the water in The Galleria on Al Maryah Island.

What else: With both restaurants notorious for providing meze plates groaning with food, expect a true Lebanese feast with an array of spectacular sharing dishes; price to be confirmed. This will also round off the 50 Best Signature Sessions in Abu Dhabi for 2023.

The second edition of Middle East & North Africa’s 50 Best Restaurants, sponsored by S.Pellegrino & Acqua Panna, will be announced on Monday, 30th January 2022. To be the first to hear about the latest news and announcements, follow us on Instagram, find us on Facebook, visit us on Twitter and subscribe to our YouTube channel.