From #MeToo to marches, the past 18 months have seen a gear shift in the conversation around women. Across the bar and restaurant scene, staff have spoken up about abuse after decades of fear, and there are global efforts to boost female representation and create a fairer industry.

As this International Women’s Day celebrates the theme #BalanceforBetter, we list just nine of the hundreds of initiatives towards equality from within the wider 50 Best family. 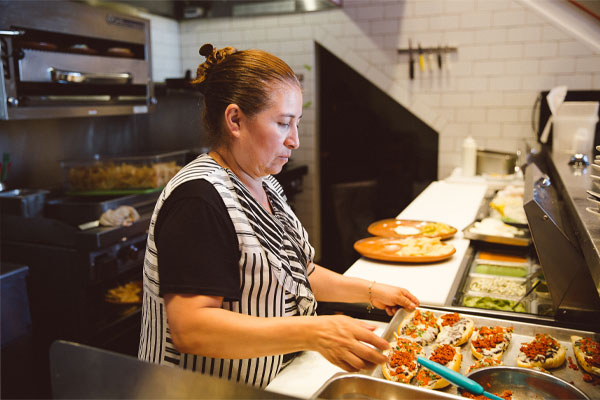 Inside the kitchen at El Buen Comer

Later this year, the non-profit foundation La Cocina will break boundaries by opening the US’s first ever all-women food hall in San Francisco’s Tenderloin district. La Cocina Municipal Marketplace will showcase the cuisine of women who have graduated from its incubator kitchen programme, which trains immigrants and people of colour to run their own restaurants. As part of a special diversity edition of #50BestTalks in 2018, 50 Best visited chef Isabel Caudillo’s Mexican restaurant, El Buen Comer, one of the 30 successful establishments opened by La Cocina graduates across the Bay Area since 2005.

2. I Drink Alone: stamping out stigma for women in bars 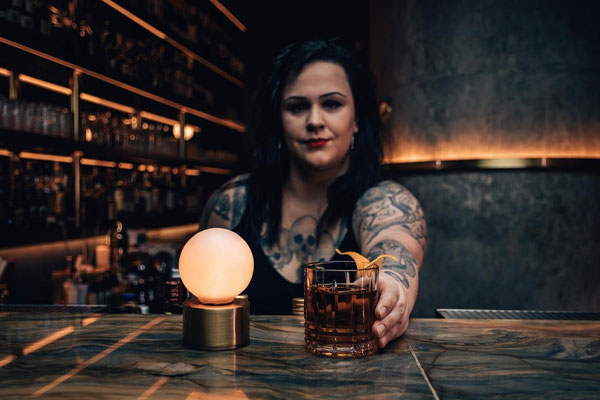 Michelly Rossi from bar Fel in Sao Paulo and her drink, Dandara

Inspired by a historical Brazilian feminist figure named Dandara, Michelly Rossi set up a movement called Eu Bebo Sozinha (‘I Drink Alone’ in Portuguese), empowering women to sip their drinks without fear. To kick-start the initiative, she created a special-edition cocktail called Dandara at her bar, Fel, in Sāo Paulo, and has enlisted fellow female bartenders to help spark a conversation about the male-dominated bar industry.

Janaina Rueda, supporter of the campaign and chef of nearby O Bar da Dona Onça and A Casa do Porco, says: “Every woman should have the right to sit at a bar and drink alone.” 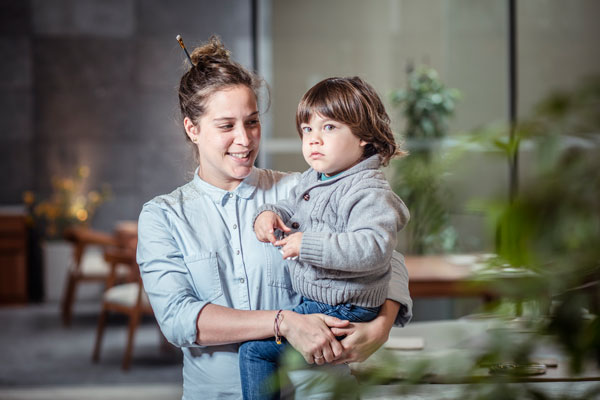 Pía León and her son Cristobal

At Maní in Curitiba, Brazil, chef-owner and mother-of-two Manu Buffara has a nanny on the payroll to look after the children of all staff who work the dinner service. Meanwhile, at Kjolle in Lima, Peru, chef-owner and mother-of-one Pía León ditched the practice of split shifts, allowing employees to go home to their families instead of returning to work. Numerous others including Elena Reygadas of Rosetta in Mexico City and Leonor Espinosa of Leo in Bogotá are making active changes to foster a positive and flexible working environment for parents of young children.

Like their female counterparts, many of the male chefs behind the 50 Best restaurants are also committed to helping retain employees through better conditions. At Mirazur in Menton, France, chef-owner and father-of-two Mauro Colagreco reduced the working week to 4.5 days to allow staff more free time. At El Celler de Can Roca in Girona, Spain, chef-owner and father-of-two Joan Roca split his team into two brigades so that staff would work shorter shifts. Many restaurateurs, including Richard Ekkebus of Amber in Hong Kong, make a point of cultivating a more balanced kitchen environment by having a 50-50 workforce.

As the only female Indian cook with a Michelin star, elit™ Vodka Asia’s Best Female Chef title-holder Garima Arora is all too aware of the industry’s lack of female representation in her home country, so it’s natural that she backs an association in her home town of Mumbai that helps women to gain financial independence through food. Like a number of women’s associations across India, Rajasthani Mahila Mandal helps women to sell the food they produce while giving them access to family planning, health clinics and other services. 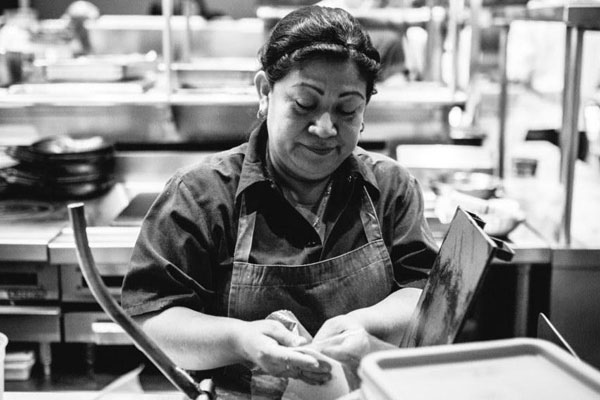 It’s no secret that working in restaurants is physically demanding, and that many women give up the profession after having children. But too few are able to return to work once their kids are a little older – and several chefs are seeking to make that transition easier. At Cosme in New York, the majority of Daniela Soto-Innes’s workforce is female, and many of those women are over the age of 50, including revered tortilla maker Lupe. At Narda Comedor in Buenos Aires, chef-owner Narda Lepes has a policy of hiring women over 60 to work in her dining room in a bid to use their experience and give opportunities to mothers returning to work after bringing up children.

7. Speed Rack: the all-female cocktail contest with a cause 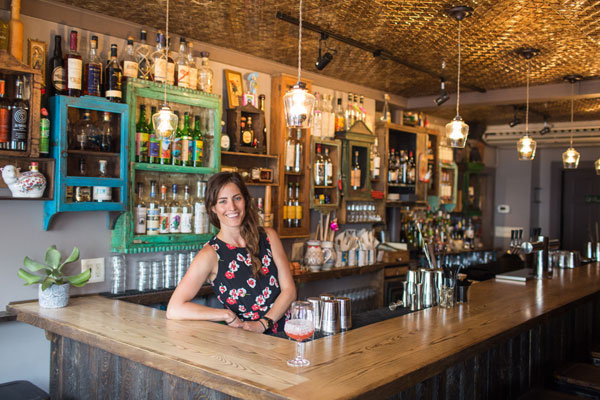 Ivy Mix, co-owner of bar Leyenda in New York, is doing her bit to champion female bartenders with Speed Rack, the travelling cocktail competition she co-founded to boost women’s careers while raising money for breast cancer charities. Now in its eighth season, Speed Rack hosts round robin-style timed and judged challenges in cities all over the US and Canada and donates $100,000 to a variety of charities every year. The competition is now headed for world domination, launching in Australia in 2018 and with plans to land in Mexico City this June. 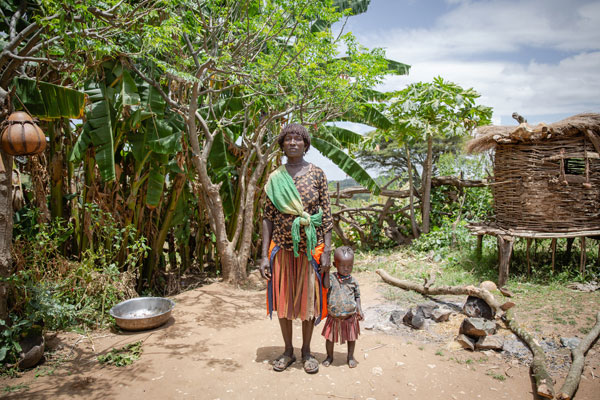 One of the Ethiopian women participating in Livestock for Livelihoods

UK-based Farm Africa, the official charity partner of The World’s 50 Best Restaurants, helps women across Africa to achieve financial independence through a number of projects. One of these is Livestock for Livelihoods, which supports over 10,000 women in Uganda and Ethiopia by giving female goats to vulnerable women, who then pass them on to other women to create a cycle of improved prosperity. Farm Africa is also helping women to make profit in the male-dominated coffee trade through its Coffee is Life appeal. 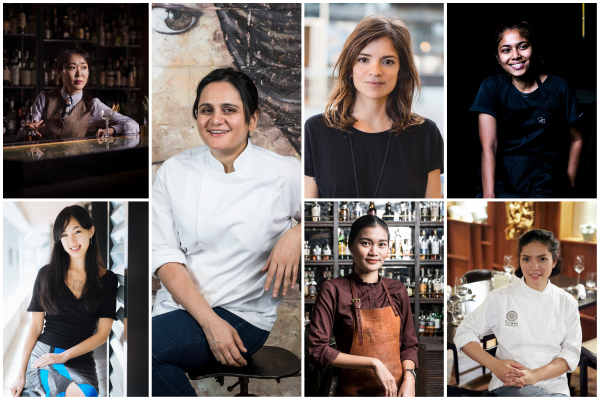 2019 is a year of change for The World’s 50 Best Restaurants, which has introduced its first gender-balanced voting panel, in addition to its existing 50-50 panel of Academy Chairs. 50 Best will soon launch 50/50 is the new 50, a series supporting gender parity in the restaurant industry, which will put the spotlight on new initiatives, give voices to female characters or supporters and cover events and actions that foster a more inclusive environment.

50 Best has also pledged to make all its live events as gender-balanced as possible, starting with #50BestTalks: Vital Ingredients at Asia’s 50 Best Restaurants in Macao, featuring chefs Garima Arora and Bo Songvisava and forager Valeria Mosca, then #50BestTalks: Female Spirit at Asia’s 50 Best Bars, with a women-only line-up including Sasha Wijidessa of Operation Dagger in Singapore and Pinsuda Pongprom of The Bamboo Bar in Bangkok.

As 50 Best’s Director Hélène Pietrini put it in her open letter on diversity last July: “We can help foster an environment where expert female voices are heard and where female chefs are identified, valued and invested in on an equal basis to their male counterparts.” Here’s to a more diverse and balanced industry from 2019 and beyond.

Header image: the women who work in Cosme's kitchen

Past and present Best Female Chef Award winners are celebrating International Women’s Day with special meals, including a collaboration between Clare Smyth and Anne-Sophie Pic at La Dame de Pic in London on March 11 and an eight-hands lunch between Bee Satongun, Vicky Lau, Margarita Forés and Natsuko Shoji at Tate Dining Room in Hong Kong on March 27.

Meet the 2019 elit™ Vodka Asia’s Best Female Chef, Garima Arora, and read the latest news and interviews with women across the industry.